This is it, the Infiniti G series’ last hurrah. After this, it’s nothing but “Q” as far as the eye can see. To be fair, the G37 coupe and convertible will continue on with a simple “Q60” rebadge (the G37 sedan is now the redesigned Q50). This particular example is a fully loaded RWD convertible. The only options not checked are AWD and IPL. I picked this car up from a friend of mine that was away on business for a month… during prime top-down weather. It had 8,000 miles on it when it left his driveway. Enough history, let’s get to the review. 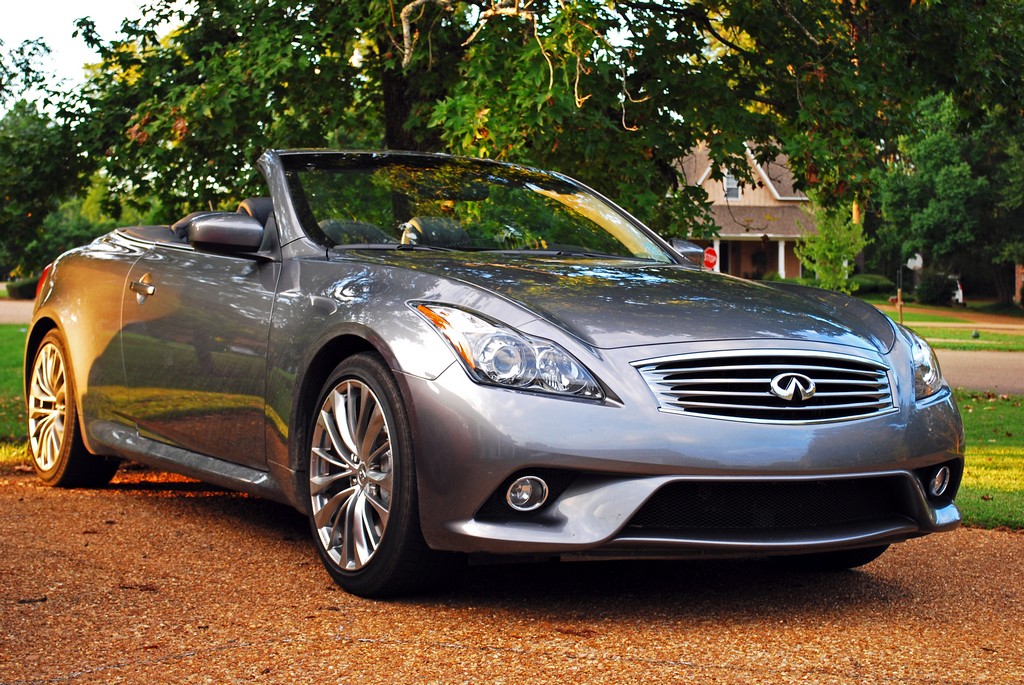 What’s the first thing you should do when you get in a car like this (you know, besides starting it)? That’s right, put the top down. With 78 degrees of sunny Fahrenheit goodness, I couldn’t wait to get that “wind in my hair” experience. With the car in park, I punch the “top retract” button. Not much happens. Um, ok… hold it down? There we go! The vehicle automatically puts all the windows down, and then you hear a myriad of moving levers, latches, clunks, and other witchcraft happen while the top goes down. Coming from a Miata, I must say this top is incredibly complex, and seems to take a LONG time to go down. It also takes up a hilarious amount of trunk space, but more on that later. It also will not operate if the vehicle is moving at all. So what, the fact that it goes down is all that matters.

Anyone who’s driven a G since it has been graced with the VQ engine knows about the lovely exhaust note while driving. This car is no exception… in fact it’s accentuated with the top down. You really can’t help but have a smile on your face when you take off for the first time. It would seem the vehicle and transmission engineers liked it too, because after the initial “getting to know the car” miles passed, I noticed the transmission seemed to hold the gears longer than really necessary, shifting around 4000 RPM during what I would consider normal driving. From a power/fuel economy standpoint, this seemed completely unnecessary. I’m one of those “hard-core manual transmission until I die” type of people, but if I can’t have one I prefer either a DSG or traditional auto with paddle shifters, followed by traditional auto (without paddle shifters), followed lastly by the bane of any automotive enthusiast, the CVT. That being said, I spent the majority of the time in this car in manual mode, which brings me to my next observation – this car takes a LONG time to shift after you’ve actually hit the paddle. Getting back to the car shifting at ~4,000 rpm in auto situation, I thought “a-ha! I’ll show you who’s boss and just throw this thing in manual and shift on my own”. To my surprise, it hesitated so long, it was still shifting around 4k. Basically what you have to do is click off the shift around 2500-2600 rpm and then it’ll stay in gear until around 3000-3200 rpm and shift. A little annoying, but you get used to it… sort of. 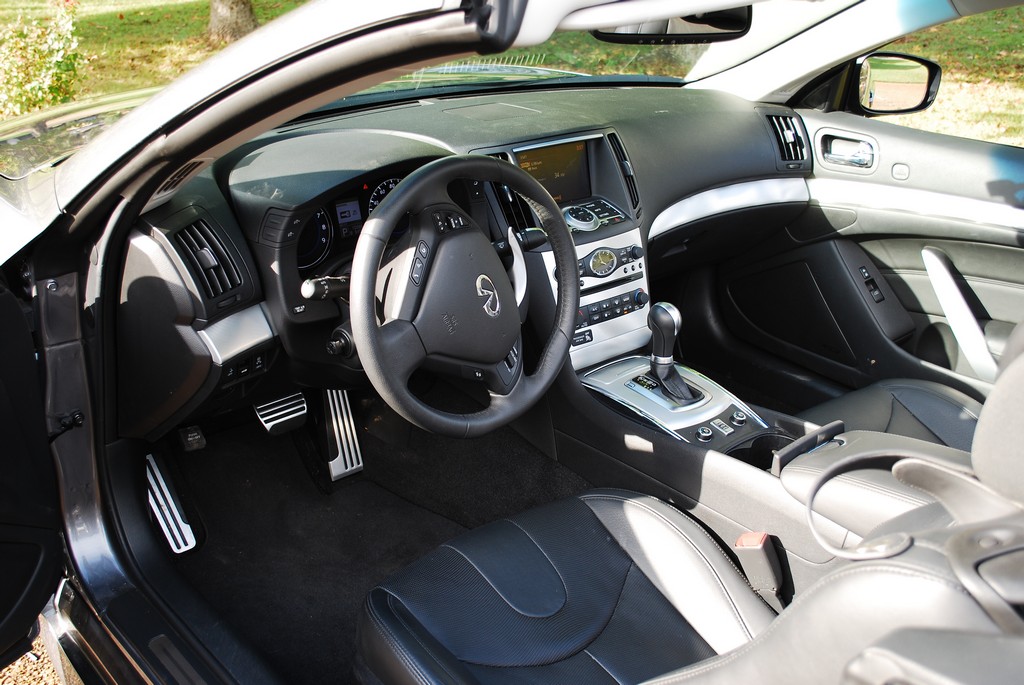 Interior ergonomics are good, although the belt line is a quite high for hanging your arm/elbow out the window. If you’re under 6 feet tall, you probably won’t spend much time doing this. Trunk space (picture on the right) with the top down really is almost non-existent. After loading the owner’s manual and a pack of leather wipes, the trunk is damn near tetris’d out. In case any rednecks are reading this – neither my .22 rifle nor my shotgun would fit in the trunk (even dead empty) with the top down. I’m not talking “maybe if you finagle it just right it would fit”, I’m saying there is no way to get it in there at all. Fortunately this car has a pretty decent back seat (which can fit 10 12-pack cases of beer in it, safely, with the top down). 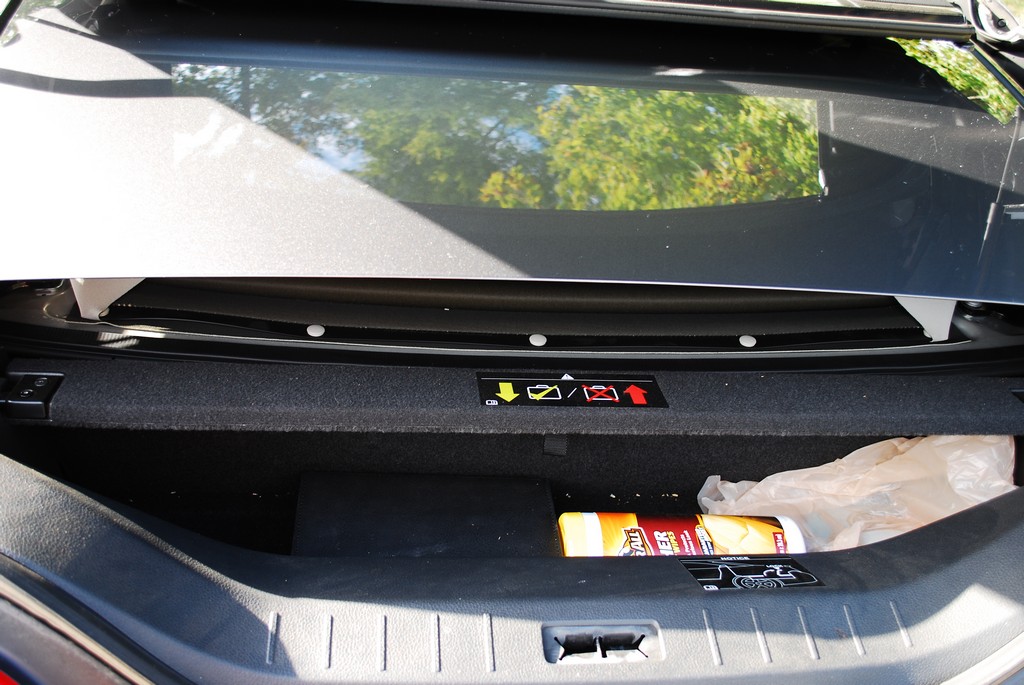 Promptly after picking the car up, I headed straight for the track. The local SCCA club was having a race at an old airport which was on the way to my destination- an opportunity too good to pass up. Like I mentioned before, the weather was absolutely perfect for top down anything, so the top stayed down during this escapade. After unloading all my buddy’s stuff from the car and walking the course, I strapped the helmet on and lined up first in the grid. A/C off, traction control off, throw the shifter in sport mode and tap the paddles to let the car know it’s going into manual mode and about to get the living shit beat out of it. I got the go-ahead from the grid worker and stabbed the throttle. The tach hauls ass to 6300 RPM and I slap the flappy paddle shifter. Remember when I said it takes forever to shift? Yeah well, it still does, and I bounce off the rev limiter. No matter, the first run is always just a shake-down run anyway. Enter a corner too hot, and you’ll understeer. Nail the throttle while you do it, and the car will start to rotate around, but then the dash flashes some nonsense at you and it goes back to understeering. This is truly vexing. I thought traction control was off? Did I do something wrong? I finished the run and rolled out to a large empty spot of the air strip and blew an experimental donut (you know, to test traction control again). It did it no problem… weird. The subsequent runs were much of the same. I got the shifting down and tried to enter corners at speeds where I wouldn’t understeer/try to oversteer, but come on, that’s no fun. If I had my wits about me, I would have tried to locate the ABS/Traction Control fuse and pulled that little bastard out.

Having driven a few normal/non convertible G37 coupes (stick shift) and 370Zs, I can say there’s noticeably more chassis flex in the convertible. Some of the corner workers mentioned to me later it looked like I was really fighting the car, and it flexed a lot. Even with all that, it was still very fun. I DID try running in sport auto for one lap, just for experimental/documentation purposes. Don’t do this. It was horrible. It would shift into 3rd gear WAY too early (such as under partial throttle in a corner) and then not downshift when you stab the throttle coming out of the corner. The lap in auto mode was 12% slower than my slowest manual lap. At the end of the day, I finished mid-pack. 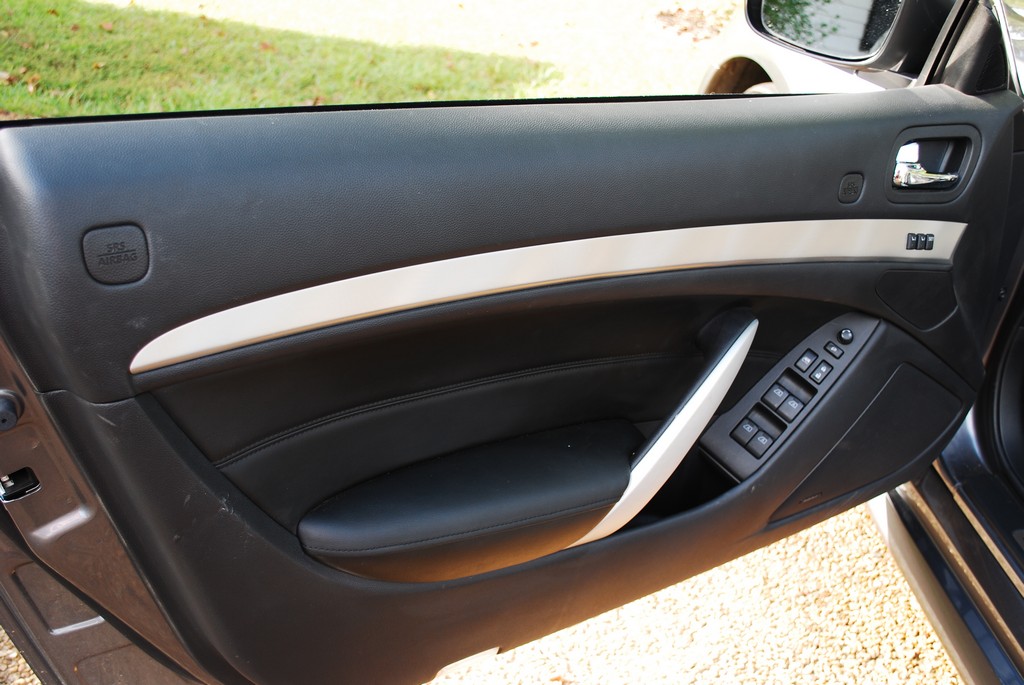 After the race, I was driving to a friend’s house to stay the night before heading out in the morning to drive across a few states and catch a football game for his birthday. His girlfriend bought the tickets, I had to provide transportation and hotel. Works for me. This particular friend knows me fairly well, and I told him I had a surprise for him when I showed up. I’ve owned a laundry list of cars ranging from epic POS’s to highly modified track sluts. Each is fun in their own right, but this friend did not know I had access to the G for our trip. I arrived to his house full of other friends watching football (who wouldn’t be joining us the next day). Jealousy ensued, and then they saw the heated/cooled seats. At that point jealousy was replaced by simple hatred.

I had previously driven a 2009 G37 coupe from Atlanta to St. John’s, Newfoundland (switching off driving with the owner of the car), and remembered that these G’s were great grand touring cars. I forgot just how good. This 2013 convertible was even better. THIS is where this car really shines. The ride is unbelievably planted yet still comfortable. The faster you go, the more planted this car feels. Even with the top down at speeds well into triple digits, you are still comfortable. The faster you go in this car, the happier it seems to be. I couldn’t help but think of all the accounts I had read about SR-71 pilots saying the same thing about the marvelous plane they were flying. While I’m not outrunning Soviet missiles in the G, I like to think I shared the opinion of my vessel with those pilots. Even better – if you’re going on a long trip, activate the anti-monkey butt seat coolers. You’ll arrive at your destination with a smile on your face, ready to hit the town. There’s a distinct feeling that “you’ve made it in life” as you blast down the highway in extreme comfort, cranking your favorite tunes with infinite head room and a clear blue sky above you.

That brings me to my next topic – the audio system. Infiniti/Bose was nice enough to include actual, real, physical buttons and knobs for common functions, as well as navigating through their infotainment touch-screen. For that I am grateful. The actual audio, done by Bose lives up to the old saying- “no highs, no lows, must be Bose”! To get a good sound out of the speakers, I literally had to max out the bass and treble (much like I did in the current gen Maxima I drove). Once dialed in, I didn’t hear any rattles or muddiness, even at higher volumes. The volume limit itself left a little to be desired as well. Its adequate for normal every day cruising, but sometimes you just want to rock out… hard. Another option I wish this car had was speed sensitive volume control. If there is any car ever to have this feature, it should be a convertible. The manual says there’s something called “Bose Environment Correction” or something to that nature, but all it did was make everything sound muddy when I activated it. It DID adjust the volume slightly, but not enough to my liking. I’ve seen user-programmable volume gain controls in other vehicles – this should have that. In fact, this should have separate gain settings for top up and top down.

For those of you that care about fuel economy, I was getting around 19-20mpg around town, and 24-25 during normal highway driving around 70-80mph. I drafted a semi doing 70mph on the return trip from the football game for about 40 miles. During that leg, the G was getting 30.5mpg (A/C off). Pretty good for drafting, and not horrible for normal driving. Maybe the aero on this car is built for downforce, sacrificing an mpg or 2 in favor of that über planted feeling you get at speed. 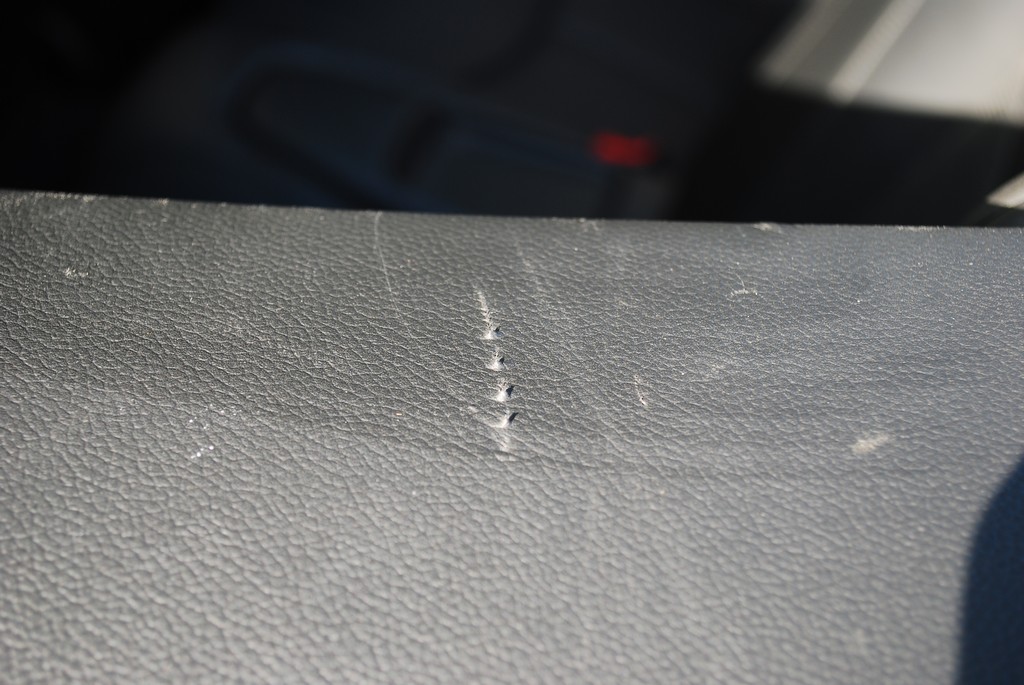 The owner likes to use this car’s limitless headroom to his advantage for moving large things, and it shows. The interior materials simply are not meant for this type of abuse. If you have dogs or other animals with claws (or kids that like to stab things?), you may want to lay down some protective covers for them.

Most luxury convertible buyers won’t be doing smoky, sideways burnouts, dodging cones, or hauling firearms and beer across state lines. The G37 does a great job of gobbling up miles while looking good, and that’s the main concern. With a starting base price (nicely-equipped, mind you) of $47,900, this G-ride will definitely put a dent in the droptop sales of Lexus, Mercedes and BMW.

Now to find a friend with an IPL G37 Convertible… Y’know, for testing purposes.