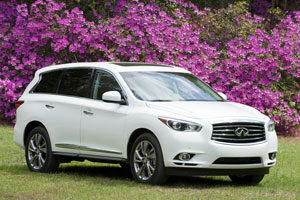 The all-new 2013 Infiniti JX luxury crossover has been on sale in the United States for less than a month but it has already picked up its first major media award – being named to WardsAuto.com and WardsAuto World magazine’s prestigious Ward’s 10 Best Interiors list for 2012.

“The Infiniti JX carries over and improves on the excellent interior design language we saw in the M sedan a few years ago and in the QX SUV last year. The WardsAuto editors find the JX to be an ideal blend of premium wood, sumptuous leather and judiciously applied brushed aluminum trim. The entire interior feels meticulously crafted,” Ward’s editorial staff wrote in announcing the selection of the Infiniti JX.

“The value proposition is tremendous: $54,800 for a stylish, well-appointed 7-passenger cross/utility vehicle that still feels remarkably car-like and has a panoramic roof that fills the entire cabin with natural light. And climbing into the third row is no trouble at all thanks to the ingenious sliding, folding-clamshell second-row seats,” they continued.

The full article on the awards will be available in the May issue and online at WardsAuto.com on April 30th. The award will be presented at a ceremony in Dearborn, Mich. on May 17th.

“The initial response to the new Infiniti JX from consumers and media has been tremendous and we’re thrilled by the early recognition from WardsAuto World,” said Infiniti Americas Vice President Ben Poore. “We believe the JX’s hospitality features are unmatched in the segment and it’s great to have this important third party validation right out of the box.”

Vehicles are selected to the Ward’s 10 Best Interiors list after an intensive evaluation of dozens of nominated vehicles, each judged in areas such as materials, ergonomics, safety, the human-machine interface, comfort, fit-and-finish, overall value and aesthetics.

About Infiniti
Infiniti offers a full-line of luxury performance automobiles, including the G Coupe, Sedan and Convertible, M sedan, EX and FX crossovers, and the QX full-size SUV. More information about Infiniti and its Total Ownership Experience® can be found at www.InfinitiUSA.com.