We live in a time when 707-hp engines, active suspension control and carbon-ceramic brakes are appearing on production vehicles. Yet none of these performance options (or anything remotely similar) featured prominently in my test of the 2015 Infiniti QX60. And what’s more, they weren’t really missed.

When Infiniti crafted this seven passenger luxury crossover, the aim was for a family-friendly, yet stylish vehicle. Performance to match those attributes was really a matter of balance. To test how successful this balance is in the QX60, I elected to take a trip over the Colorado mountains in the dead of winter. Driving westbound on Interstate 70 from Denver, the QX60 AWD quickly faced melting snow and ice on a constant uphill grade as the highway rose towards Idaho Springs. The fact that we were climbing from about 5500’ to an altitude almost double that on Vail Pass didn’t seem to stress the drivetrain. The 265-hp VQ35DE seemed to hum contentedly at about 2300 RPM as the CVT found the perfect sweet spot in the powerband for 70 MPH. The CVT itself featured new D-logic for 2015 and felt smooth and solid as I watched the revs slowly rise and fall (depending on the grade and demand on the engine) over the course of the trip. Mileage on this trip seemed to be almost a match the EPA ratings of 19 city/25 highway at 24 (mostly highway miles) MPG. 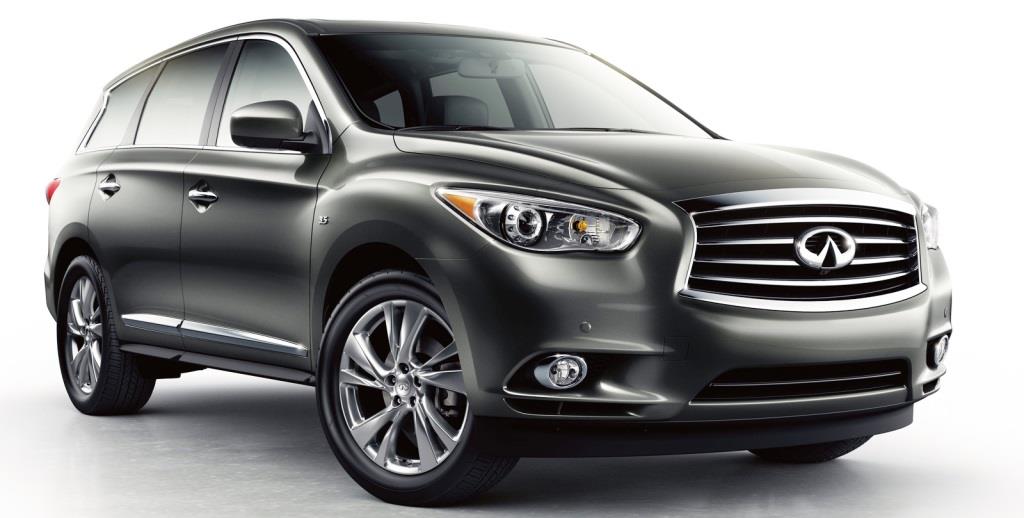 Noise, vibration and harshness (NVH) was well-controlled, as you might expect in a luxury vehicle that competes with the likes of the Cadillac Escalade, Audi Q7 and Acura MDX. But it’s the fit and finish of the well-appointed interior that really gets your attention. Housed in a wave-like instrument panel, the electroluminescent gauges are easily viewed, as is the 7.0″ full-color monitor with GPS navigation in the waterfall area. An optional maple trim package was well-matched to the grey leather interior package and added to the overall ambiance of the cabin. Maxima A34 drivers might smile when they see a version of their “Skyview” moonroof (a long, rectangular panoramic glass roof section that stretched from front-to-rear on ’03-08 models) in the QX60. It’s matched with a more conventional sunroof for front passengers, while the rear moonroof comes with a powered sliding roof cover to suit the rear passengers. 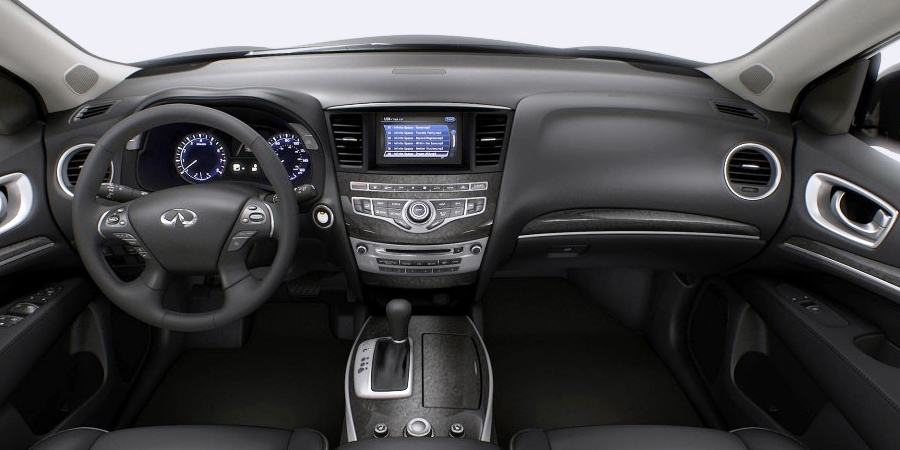 For such a large vehicle, stability around curves was good, although the QX60 is no sports car by any stretch of the imagination. Braking was strong, with large 12” rotors (12.7 F and 12.1 R) matched with four-wheel ABS to easily modulate and control effort. For a vehicle weighing 4,462 lbs., the QX60 seemed to easily dance around any of the winter conditions encountered along the way. Steering was reasonably direct and provided feedback when we hit a few sand-covered turns outside Edwards, Colorado. No big problems, just a little understeer to let the driver know traction was a bit compromised in that section of roadway. This QX60 also had a host of electronic driver aids available that worked as billed. Active Lane Departure (ALM) used cameras mounted under the rearview mirrors to help track highway lane dividers/shoulders. This system interfaced with ABS/VDC control to engage individual brakes to guide the wayward vehicle gently back into its lane if the driver wasn’t paying attention. Combined with Intelligent Cruise Control (ICC) and Distance Control Assist (DCA), which uses sonar sensors in the front bumper to maintain recommended following distances to the vehicle(s) ahead, and the OX60 could almost drive itself! 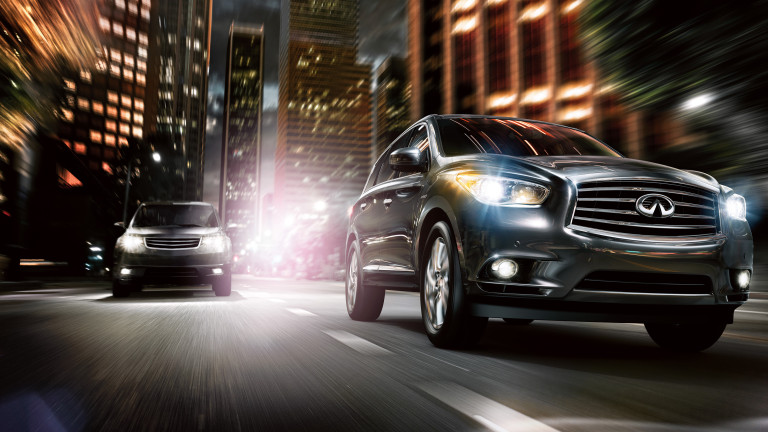 About the only issue encountered over this particular weekend had to do with storage space. With all three rows of seating up, there wasn’t enough room for all the ski gear I elected to bring along. While the QX60 boasts of room for seven people, there’s only 15.1 cubic feet in the rear hatch area for cargo. I found folding down the third row of seats and half of the second row allowed three skiers to get all their equipment onboard for a day of carving up fresh snow at the Sunlight ski area outside of Glenwood Springs. Family skiers take note: you’ll need that ski rack on top of the roof rack to travel to those powder days in style.

Speaking of style, the QX60 was certainly a classy ride on the drive back down to the city. The 13-speaker BOSE sound system sounded great playing everything from the classical tunes my wife adores to the rock ‘n roll pop music in my domain. The Graphite Shadow (dark metallic grey) paint flawlessly accentuated the swoops and curves of the QX60, while the styling still looks fresh three seasons after its original introduction. This balance of performance, utility and style helped the QX60 become a resounding sales success for Infiniti. As the second-best selling model in the lineup last year, it’s helped keep the company afloat during a period of transition. For a luxury brand trying to reassert itself, the QX60 has delivered on the type of vehicle performance most highly prized: sales.

[EDITOR’S NOTE: I’ll take mine with the Larte Design upgrades, in black, thanks.] 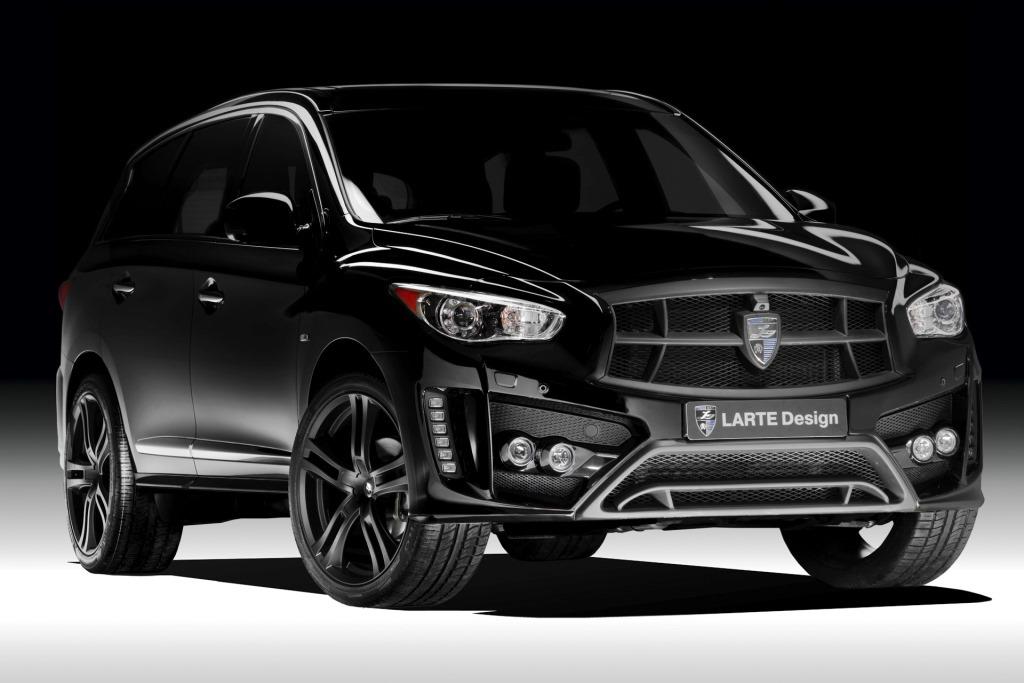