It’s a movement many drivers have become experienced at performing, lifting a clutch pedal that only comes up halfway with the tip of the left shoe. It’s also one that I had been doing more and more frequently lately.

My clutch was fine in the mornings or after the car had been setting for a while, but after some driving the pedal quickly decided the full travel stroke was just too far and it wasn’t going to do it. Higher temperatures made things worse faster and recovery slower…and August was just beginning.

There are plenty of miles on my Z and all parts eventually need replacement and this problem pointed squarely at the clutch master cylinder. While it was open I decided to do the slave cylinder too and put in a steel braided clutch line. I really wanted to add the Nismo steel braided line with the fire insulation jacket but I couldn’t find it anywhere. Every place I called said almost the exact same thing, “Six to eight weeks, it’s special order only from Japan.” Even when I found it on eBay in a few auctions/storefronts the sellers I contacted said they didn’t have it on hand and they would have to order it.

I called several retailers and explained how I couldn’t find the Nismo clutch line anywhere in the US and when I pointed out that it was the insulation jacket that I really wanted, they suggested the DIF stainless steel braided clutch line. The sleeve on the line is rated to 1090 degrees – CELSIUS, that’s nearly 2000 degrees fahrenheit for those that aren’t metrically gifted, heat will no longer be an issue! 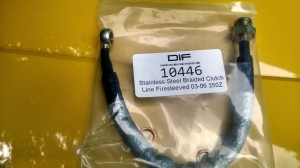 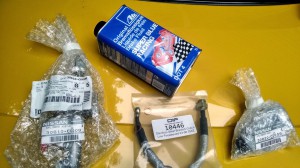 Armed with the new line, master and slave cylinders from the local Nissan dealership and one of the last unopened liters of ATE Super Blue brake fluid from my garage I was all set. Installation of the line is straightforward. More time will be spent on bleeding the clutch than anything else, but with the master and slave cylinder replacement that was going to happen anyway. I drove easy for a while getting used to the feel of the new bits but later took a 45 minute blast through the mountains and didn’t have a single problem. Well, I did have one… I wonder how long will it take for me to unlearn the gesture of trying to raise the clutch pedal with my foot?

350Z Diagnostic ECU Codes and How to Clear Them

How To Lower Clutch pedal engagement