When we first bought the Cube, we weren’t very focused on having a highly modified car. We just wanted a cool new car, and the Cube had recently been released, as well as the Kia Soul. My wife and I decided to do some comparing between the two, and quickly came to the realization that the Cube was definitely a winner. (Being a previous G coupe owner helped to make that choice)

The next day, we decided to take a trip to Miller Nissan, our local dealership to take a look at a Cube, where they promptly suggested we take a test drive. As soon as we got behind the wheel, we were 100% convinced that this was the car that we were going to buy. It had a very nice interior with tons of headroom, and flooded with new features we had never had on any of our previous cars. The next step was deciding which trim package we wanted, between the S, SL, and Krom. We opted for the SL, as it still had all the features we wanted within our budget, and felt that the Krom was overpriced for what you get. After the papers were signed, we were happy to go home behind the wheel of our brand new Nissan Cube!

I’ve been in the car show scene for roughly 10 years now, so it’s no surprise that the Cube only lasted 4 days as OEM stock. Rummaging through my storage, I found a cool pair of carbon fiber wind splitters, ran to the cube, and test fit them with tape just to get a feel for them. I also got a little inspiration from AZHitman’s article about the Megan Lowering springs off a Versa, and went and picked up a set for the Cube. A bit later, I took a trip to one of my current sponsors, NRG innovations, and let them do a walk around to see what we could do with the car. While we were there, we installed new hood dampers, and left with a bunch of measurements. The following week, Mike at NRG called me up and asked me if I was ready for SEMA 2009 in Vegas in two months. Needless to say, I was speechless. Moreso, I was stunned. I had a brand new Cube with nearly no modifications, and a two month deadline to transform it into a show car.

We sent emails left and right, even picked up new sponsors like Rotora, who donated a big brake kit, and Killerglass, who gave us their glass radiator hose. We also bought a lot of other things like tires, wheels, a carbon fiber hood, a stillen intake, and exhaust. The Cube looked good for being built on a two month deadline. We were getting compliments from all around the country and even a thumbs up from Motor Trend Magazine. We started calling the Cube the Rotora/Tokico Cube project.

This year, we got the opportunity to take the Cube to SEMA once again, this time with honors, as the Cube had recieved many new mods. Some of these include full chassis underbracing, sway bars, and Versa headers. The only thing left was a fresh coat of paint for the Cube. We wanted a color that would stand out, but also wanted to keep it in the Nissan family. The end result turned out pretty nice, as most people don’t recognize it as a Nissan paint code.

SEMA 2010 came and went, and the Cube looked great with its Volk wheels, ATI goods, new Tokico HTS shocks, Fujita intake, DC Sports exhaust, STRI Gauges, and much more. From stock to SEMA, this adventure has been much more satisfying than any show trophy. For any show car enthusiast, your goal is to either make SEMA or make it to a magazine, so the way I see it, I can retire peacefully. 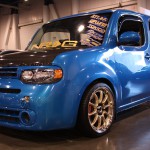 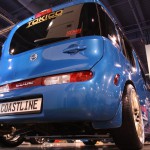 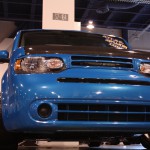 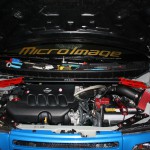