Hmmm, where to start, Lets just say the Z32 had a tiny soft spot with me. I was in the Honda game for a long while, but I wanted to step out of the scene and jump into something with a little bit more class(No offense to others). Since I did have a tiny love for this car it really wasn’t my overall first choice, I was contemplating other cars I had in mind at the time first, before even considering this horrid car :). Anyway I went to my buddies Kip+Matt’s shop(Driven Authority) for a BBQ meet, and Kip’s Z32 was sitting there, well lets say I was pretty impressed considering it was one of the cleanest Z32’s I have seen. I wanted a project car I can call my own, so lets just say I was on a mission after that.

I started saving money while I was getting to know the Z more on the forums, while spending a few months looking around, I found it! It was pretty sore to look at first, but I knew I could turn the table on that after awhile. First things I knocked out was the body work mostly, the body was resprayed the OEM Aztec red. After doing that funds were dumped into bolt-on’s, suspension, and the necessary eye candy. One part that obviously makes this thing nice too look at are the wheels, straight from the heart of Japan is where I copped some Desmond WiseSports, 18×9.5 +11 up front and 18×10.5 +23 out back.

Basically after the wheels with the right stance, the car kinda took more attention. Since then it has been in quite a few shows, while also getting quite a few features across the interwebs. Not long after, I have been asked by Kip Kearney & Matt Pool if I liked to be sponsored with them, for their WinFactory line of Z32 parts(Of course I accepted, duh 🙂 ), so expect too see some of their items on this thing in the future.

As for mods, there is a pretty good amount. Starting with the intake system, it is running Selin Dual MAF setup with JWT filters. The exhaust I had went with divorced split Downpipes fabbed up to be screamer pipes, 2.5 Specialty Z test pipes, and SS 2.5 Borla catback exhaust. As for engine management, its just running a Z1 chipped ecu for now(Real tune shortly though). With the upgrade in mods the clutch couldn’t hold the power, (Time for me to pull the tranny, yey!) Act 6 puck clutch and Specialty Z segmented flywheel went in. Turbos are SGP T25/T28’s, along with upgraded inter-coolers. Interior was kept relatively stock besides the Bride Brix’s seats, Proper+ shifter, 4 point custom cage, GiZZmo ebc along with SPl 300 deg. din for a few of my necessary gauges. Exterior stayed relatively stock as well, Stillen GTZ lip, Jspec fenders, Powertrix fog light ducts, Mission CF spoiler, and Jspec taillights. There is a butt load more done overall and it is just a long list, so ill keep it at that.

After going through the 3yrs of money and sweat from when it was a pile to what it is now, I couldn’t say I can be anymore happy just looking at it, thing breakZ my neck sometimes. There is still more to come with it however, I will not say I feel near completion, as that is the biggest lie from any enthusiast. 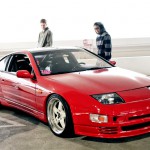 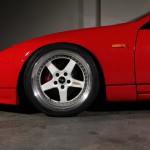 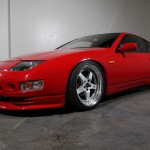 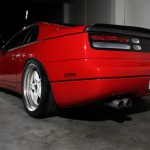 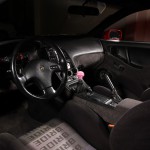 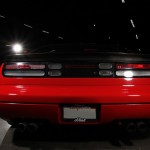 Z32: How to make padded armrests!