Time Required: Someone with good mechanical skills could finish in an hour or so, but the average person will likely take longer.

My car is a 1997 Nissan Maxima GXE. The problem I was having was that the outer door handle stopped opening my door one day. Fortunately, I could still open the door using the interior door handle. After driving around for a couple weeks with the windows rolled down to get in (Hazzard style, yea!), I took it to a mechanic to get it looked at. I thought it was something with the door handle, but the mechanic said that was ok. They told me it was the latch, that it wasn’t moving enough to open the door using the handle. Not totally busted, just not enough for the outside handle. They quoted me $150 for a NEW latch from the dealership, and $180 in labor: $360 total with tax, etc. As a poor grad student, I was like “F* that – I’ll drive around with the window open.” (You can get used latches off eBay for $30!) The mechanic did tell me a little about what I’d have to do to fix it myself, so I’m glad I went.

The first thing I tried was just spraying some PB Blaster into the part of the latch that hits the hook on frame of the car. That didn’t really do anything, so I went ahead and took off the panel to see how complicated it was going to be to replace the latch. I got the panel off pretty easy but I got a feeling the mechanic broke some of the plastic things that keep it in place which is why it was so easy. This is a picture of the door minus the panel. 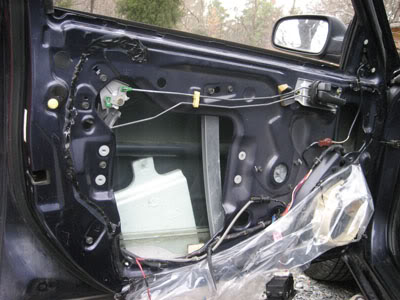 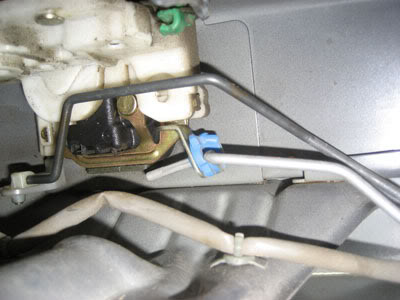 I started by removing the bolt on the side of the door by the seal which releases some long metal piece that I think is for tracking the window down correctly. With the bolt out, the long metal piece could be pulled out. Next, I took out two bolts that hold a metal guard which sits around some of the connecting rods. Next, I unhooked the two connecting rods from the this part that moves back and forth when the door locks and unlocks. They’re held in place by green plastic hooks that snap on and off. 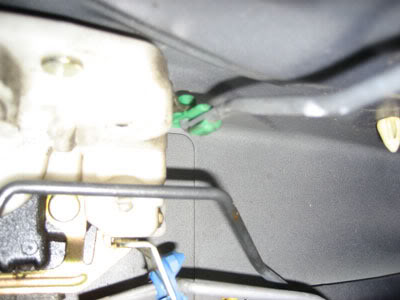 Following that, I took out one bolt that holds the bottom, right part of the latch to the door frame. 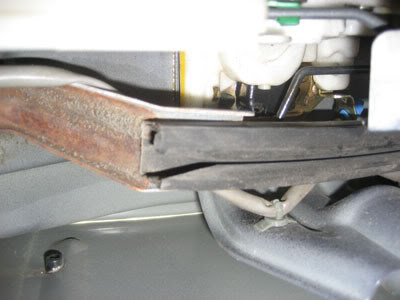 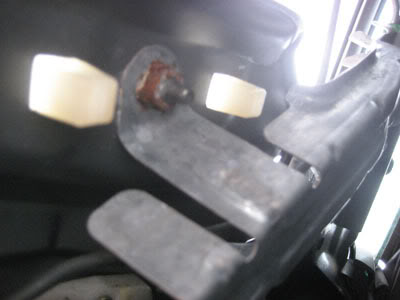 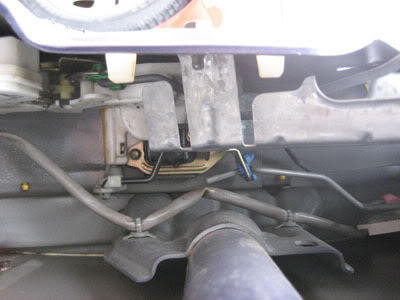 Next, you have to disconnect the rod that goes from the outside lock to the latch (near the top, red connector), and another rod that connects the interior door handle to the latch (green connector). Both are kinda hard to reach, but all you have to do is get the plastic hook off the rod and the rod comes free. 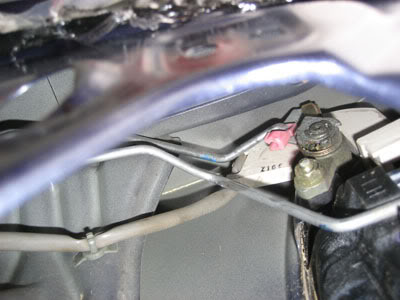 With all the rods free, the latch is free to come out. Unscrew the three screws on the side of the door, and pull the latch out. 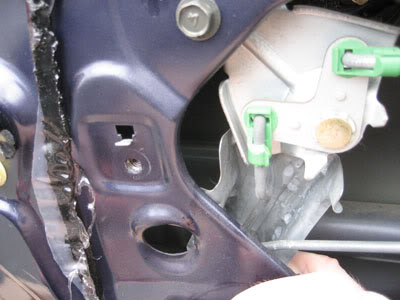 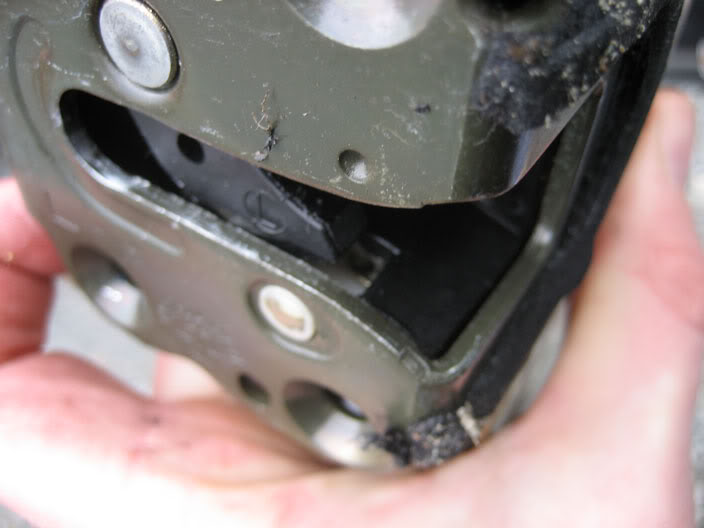 With the latch out, I saw why the outside handle couldn’t open the door, but the inside handle still could. There’s a little white piece in the latch that moves up when a handle is pulled. The indoor handle moves that piece more than the outdoor handle does, and it was just enough apparently for it to open my door. I sprayed some more PB Blaster on all the moving parts and just worked the latch (pushing down on the part that simulates opening the door) over and over. I pushed the lock in and out a few times, too. At some point, the white piece started moving up a lot more than it was and I knew that was going to be enough to open the door. So I didn’t really fix my door latch – it was fine, just needed some lube. But taking it out was necessary to get it working right. 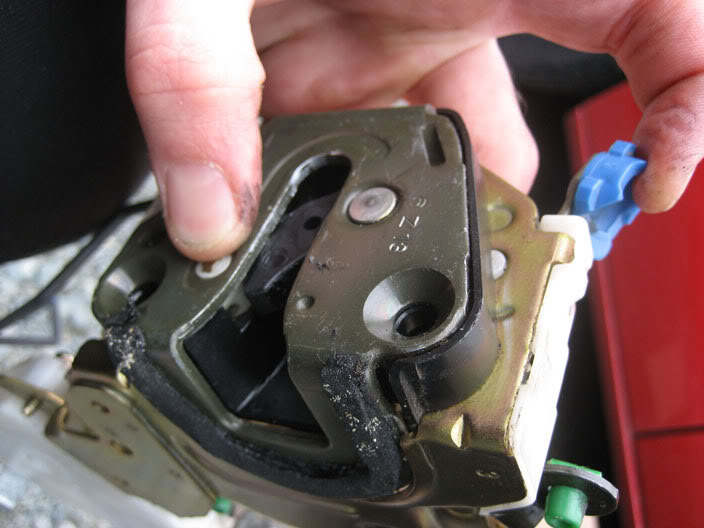 Once it was working, slide the latch back in making sure the rod that connects to the outside door handle goes into the blue holder on the latch. The blue striker plate where the rod from the interior handle rod attaches to the latch, is adjustable. Turning it 1/4 turn clockwise will increase the travel and will usually fix this problem. Put in the screws on the side of the door, and rehook up the outside door lock connecting rod and the indoor handle connecting rod (green and red). Put the rotating, boomerang shaped piece back in and hook up those two connecting rods. At this point, check to make sure both indoor and outdoor locks and handles are working the latch correctly. (You can hook up the panel with all the switches to the power cable without having the door panel on.) Once the locks and handles are working, put the metal guard and the long metal window guide back in and tighten everything up. Put the panel back on and you’re finished.

One thing to watch out for. When I screwed everything up tight, my power locks would lock the door but then stutter when trying to unlock the door. Loosening some of the screws that hold the latch in place and moving the boomerang shaped piece a little helped fix it.

All in all, it wasn’t as bad as I thought it would be. And it definitely wasn’t necessary to take the window out. Hope somebody finds this useful!