What’s your favorite thing about the internet? Social networking, being part of a car forum, entertainment, research? This article is the result of a combination of all of those things happening at the most opportune of moments. As most of you know, I created the Facebook page for NICOclub. I also spend a lot of time looking for people who I think might enjoy our website and benefit from our content. I joined pages that were devoted to most all of the Datsuns: the Z cars, the old Skylines, the Silvia, the Roadster. Well, as luck would have it, through one of these pages, I met a new friend. His name is Thorsten Link and he is Motor Journalist and TV presenter who lives in Germany. He also happens to own a gorgeous Z and is helping a friend restore a beautiful 1965 Silvia. It just so happens that Greg and I had been looking at that same Silvia but had decided against it. Thorsten promised to send pictures and keep us updated on the restoration, I offered to help him out with any information he would need that we might have.

Fast forward a few weeks and Greg received a tip that Infiniti would be unveiling the new Infiniti Etherea at the Geneva Auto Show. He says, “It sure would be nice if we could get the inside scoop and some pictures of that.” He looks at me jokingly and said, “Who do you know near Geneva?” I contacted Thorsten and he told me that due to his job, he was going to be there anyway covering the entire show. He said he would be happy to take some pictures for us and write a review. I want to take this opportunity to thank him and wish him well. ‘I really appreciate you taking the time to do this’.

*To our readers. This article has been translated from German to English. One of our moderators happens to be fluent in German and he offered to translate it for us (Thanks James!). Because inflections and meanings don’t always translate word-for-word, this article might seem a bit different from the writing style you are used to. However, it is a great read and there are some pretty amazing pictures at the end of the text. Enjoy!

This isn’t one of those smoke grenades that makes your mouth water, but then evaporates, never to return. The Infiniti Etherea is officially a concept, although a very serious one. A sophisticated Japanese compact, with flowing lines, bold curves, and gigantic pillarless doors that open outward from the center of the car (rear suicide doors), that may be available in showrooms 2 years with some sort of waiver. The car is first in line for the European Market and sets its sights squarely on one competitor: the top selling Volkswagen Golf. 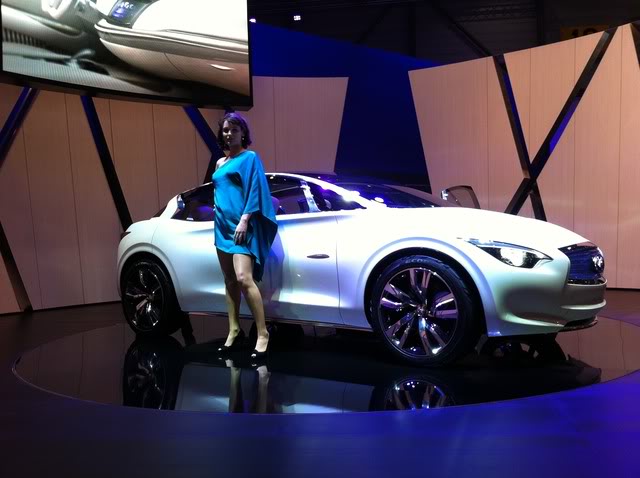 Others have already tried to take on the Golf in the past, but this time the sister company from Nissan is trying something different. The Etherea, without a doubt, does not want to be a mass produced vehicle for the entire world, rather it is for a special market. As such, it is a viable alternative for people who enjoy some specialties in their automobiles- a rarity in the automotive segment of compact cars. 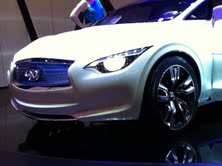 Infiniti has long operated strictly in the luxury segment, much like Lexus for Toyota. In Europe, the brand has operated largely in the shadows. In 2010, Infiniti sold a measly 400 automobiles in Germany. In order for that number to grow, Infiniti must offer a wider range of vehicles (if they wish to exist outside the US), most notably, smaller cars. 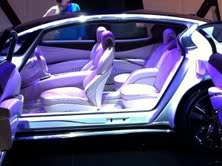 The Etherea is the first true hope for the brand in Europe. A compact car… but not just a hatchback (as is standard practice), rather a mix of all the things currently sought after in this class- a little coupe, a dash of SUV, a 4 door and also a sport gene which shouldn’t be overlooked.
With all of this comes a modern hybrid drivetrain- a beacon of awesome. How exactly the drivetrain should operate is still a secret. The concept has a forced induction 2.5 liter 4 cylinder engine with 250 metric horsepower (247 US horsepower). All power (both engine and electric motor) goes exclusively to the front wheels. Want more details? They don’t exist. The company is leaving us in the dark. Yet more motivation behind the project: the drivetrain could possibly make its way over to Mercedes. The mass production drivetrain technology for the next Mercedes A and B class is coming from the Renault/Nissan Alliance.
Conclusion? What Infiniti is putting to the wheels is very refreshing. An attractive sport-SUV-coupe of a different nature. If the production version remains like the concept, this Japanese Golf has good chances with its tough competition.