Kevin Schwartz from Peoria Nissan called me yesterday with some news that I really wasn’t ready to hear. “The Cabriolet will be here tomorrow. If you want to drive it, I’ll be available anytime after 8 AM.” With a sense of obligation, and just a little bit of dread, I agreed to stop by. By obligation, I mean that I feel a certain responsibility to test drive as many cars as I can and give our members an honest review of what Nissan has built.

Most of the time, I’m pretty excited to be one of the first members to get to drive one; this time, not so much. When the first pictures of the Cabriolet surfaced, I honestly thought it was a joke. I thought someone was just playing around on Photoshop with a picture of a Murano. When I found out it was real, I immediately went on the defensive. “Do I really have to drive that thing? Can I wear a disguise?” Yeah, OK, that is a bit dramatic but I honestly didn’t want to drive it at all. It is not my style and probably not the style of most of the members on NICO. However, I knew that it was not up to me to decide what other people like and don’t like.

So, I put on my best “un-biased” face, pushed my pre-conceived notions to the side, and headed out to see what the world’s first AWD crossover convertible had to offer. 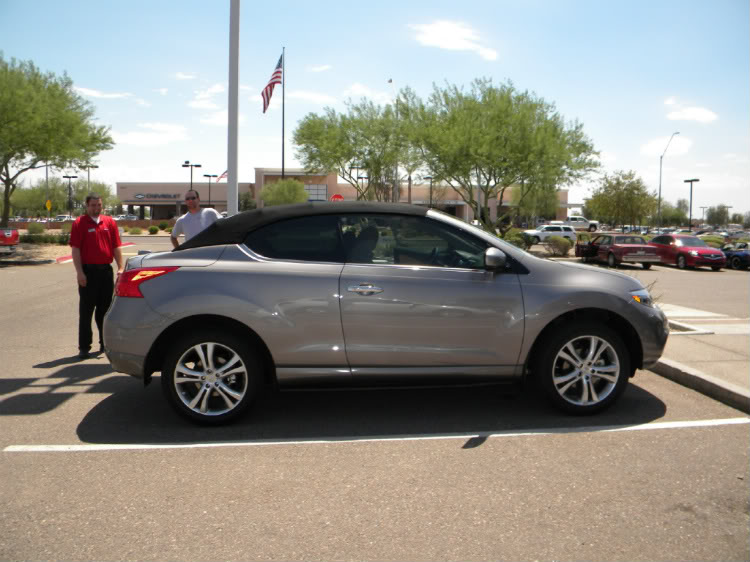 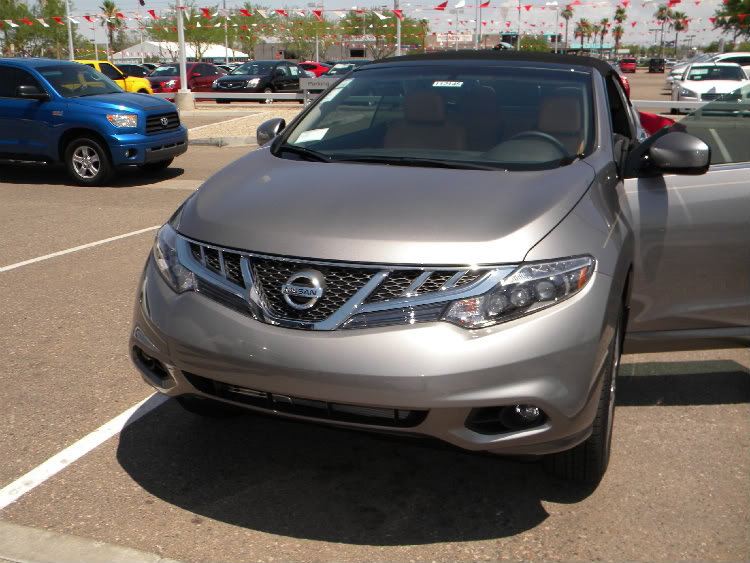 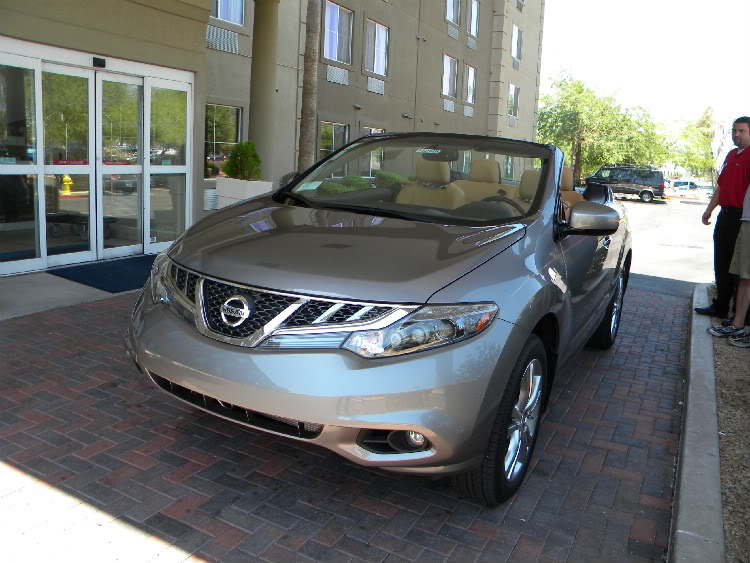 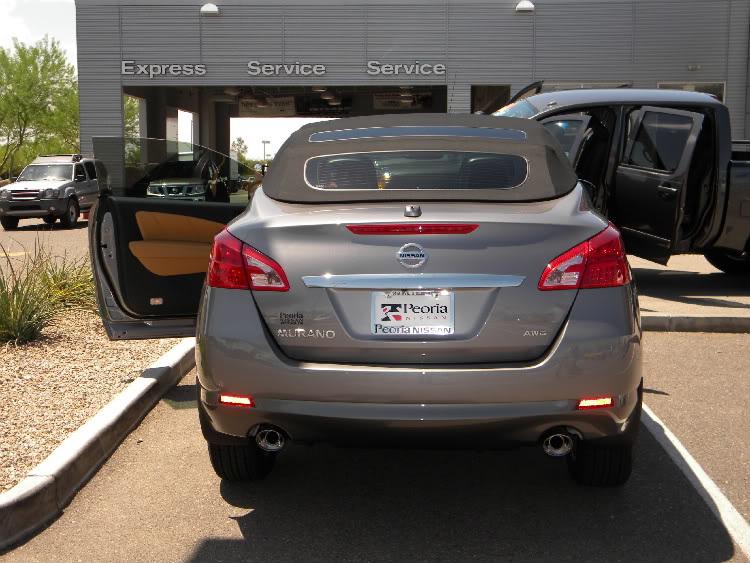 The color combination on this car was beautiful. I was worried that we would get the baby blue that was seen in many of the promotional ads but luck was on our side. The exterior was slate gray and the interior was black / camel leather. The first thing I noticed when I sat down was how nice the interior is. The leather seats were beautiful and the wood grain trim was very tasteful. The seats were quite possibly the nicest I have ever sat on. This includes the Corvette, the G35, a 350Z, a G37, and a Cadillac CTS. I was comfortable the minute I sat down. I could easily slide behind the wheel of this car and drive until the tank ran dry. The driver’s seat had 8 power adjustments including lumbar support and it was heated. The passenger seat was manual but also heated and Greg said it was just as comfortable as the driver’s seat.

The back seats were very nice and although the leg room was somewhat limited (32.7 inches), it wasn’t uncomfortable at all for me (I’m 5’7″). I was really impressed with how much the Cabriolet did not feel like a convertible with the top up. Head room in the back seat is 38.7 inches. For comparison, that’s the same as the Frontier. To give you some perspective, Kevin sat in the backseat during the first part of the test drive and his head did not touch the roof. He is 6’5″. 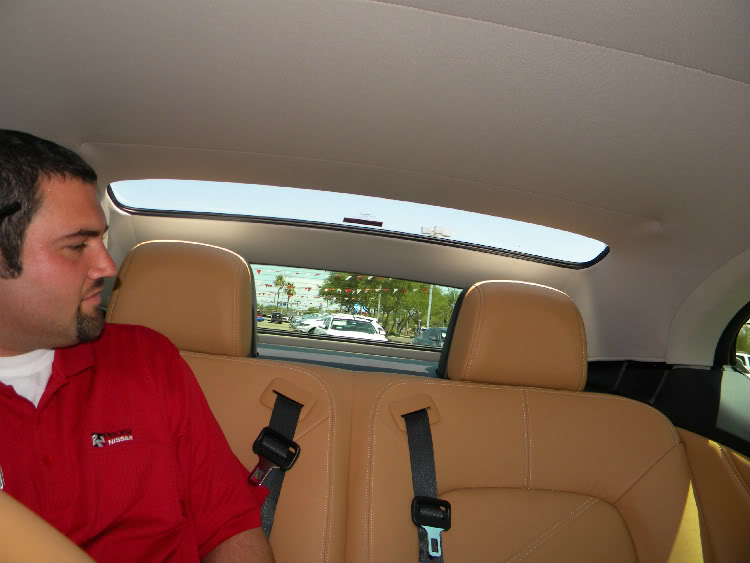 There is only one trim model on the CrossCabriolet, and it directly mirrors the Nissan Murano LE. Nissan offers a lot of goodies as standard features, including automatic headlights, fog lights, LED tail lights, dual power heated side mirrors, intelligent key, push button start, seat / wheel / mirror memory for two drivers, Bluetooth, touch screen and voice activated navigation, Bose sound system, XM radio, auxillary jacks, a USB port, two 12-volt jacks, the leather wrap on the steering wheel and the shift knob, as well as the cruise and audio controls which are well-placed and user friendly. The only thing on the one we drove that was optional was the camel colored leather. 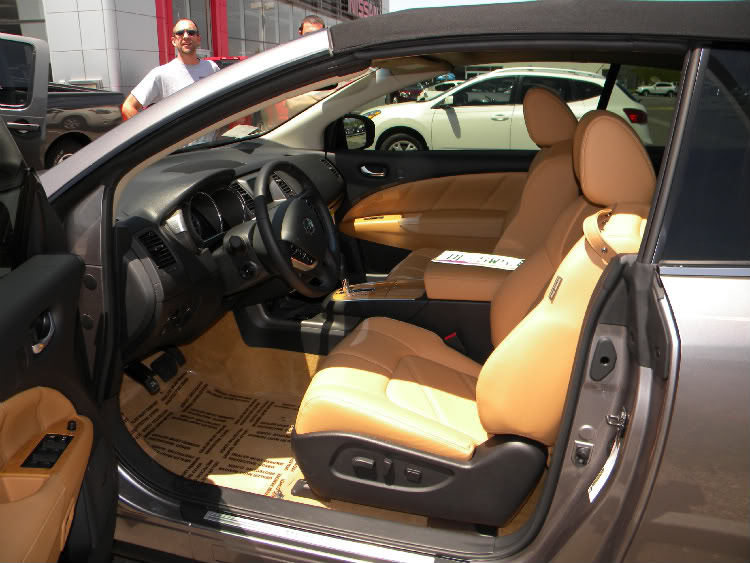 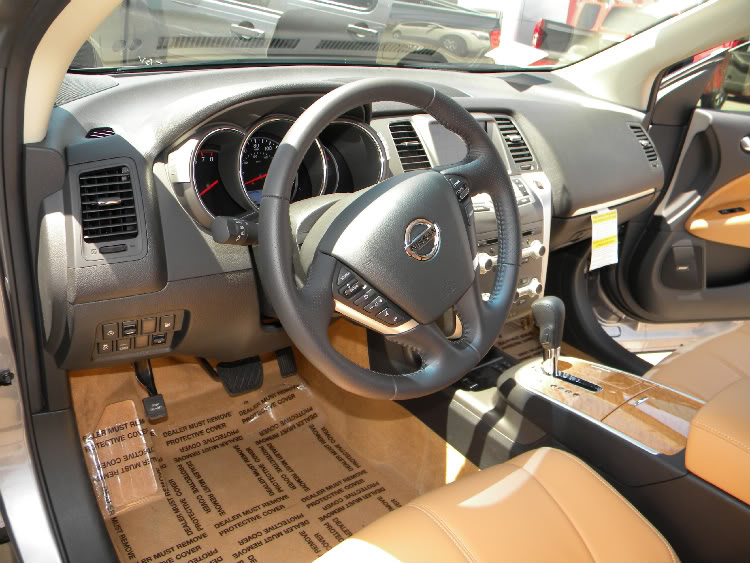 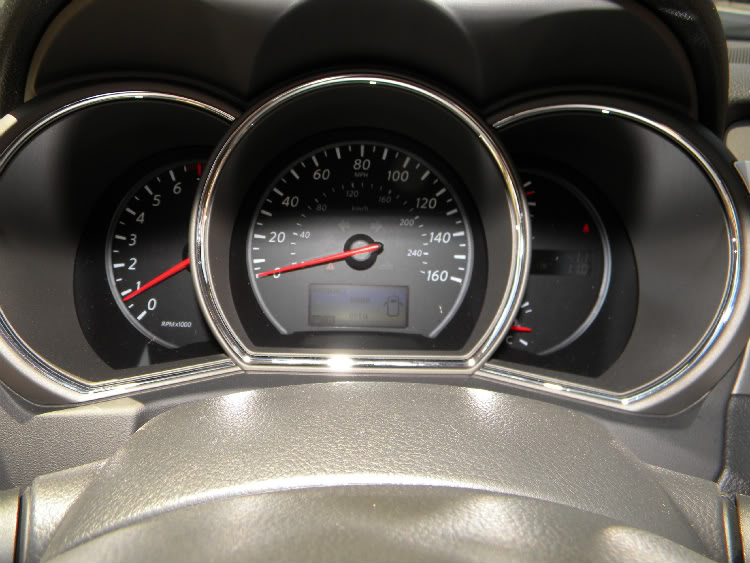 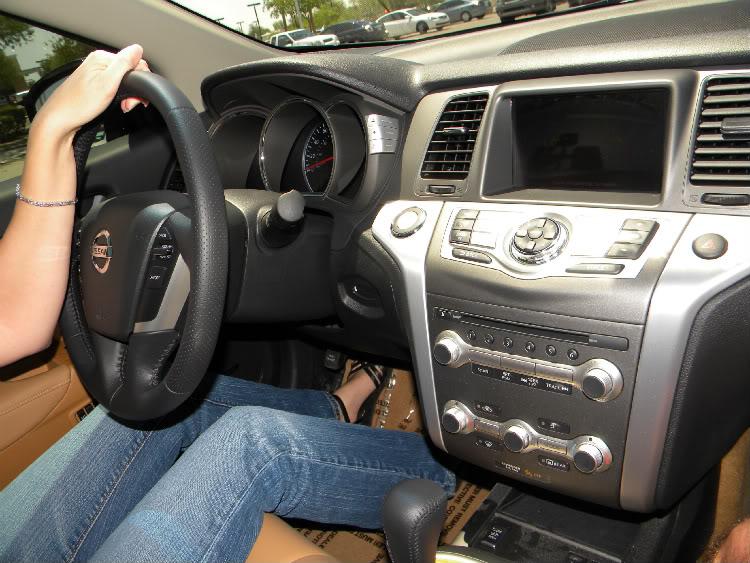 Greg let me drive first and the CrossCabriolet proved to me right away something I have suspected since we drove the Quest. The CVT is not all bad. Pairing it with the smaller engines, the 1.8 and 1.6 specifically, is not a good idea in my opinion. It just feels horrible. It takes all the joy out of driving a smaller car. However, the combination of the VQ35DE with the CVT in this car works. When I drove up onto the freeway, there was no hesitation, no balk, no jerkiness, no mashing down on the gas pedal praying for more power to be delivered to the wheels. It was there. Cruising on the freeway was effortless. There was power on demand when I wanted to change lanes, and more importantly, the ride was amazing. Smooth as silk and a breeze to manipulate in and out of traffic. It was also the first time I have ever driven anything AWD. I can’t say as that it felt remarkably different but then again I was driving on pristine roads under optimal weather conditions so I’m guessing there was no difference to be felt. Mechanically, this car is a joy to drive. The VQ35DE delivers 265hp @6,000 rpm and 248 ft lb torque @ 4,400 rpm. It has the electronic drive by wire throttle but I didn’t feel disconnected when driving it as I did with the Juke (and sometimes still with the Cube). The brakes and suspension are both driver friendly. The brake pedal isn’t touchy and the ride quite solid. Greg mentioned that it feels “like a bank vault” – no cowl shake, no typical convertible shuddering. Even the generic all season tires that are standard on almost every Nissan didn’t offer up any negative feedback.

The top goes up and down with ease with the touch of a button. It’s massive and I was wondering how smooth that operation would be. There does seem to be potential for areas that will bind up so it will be interesting to see how well the tops hold up over time. 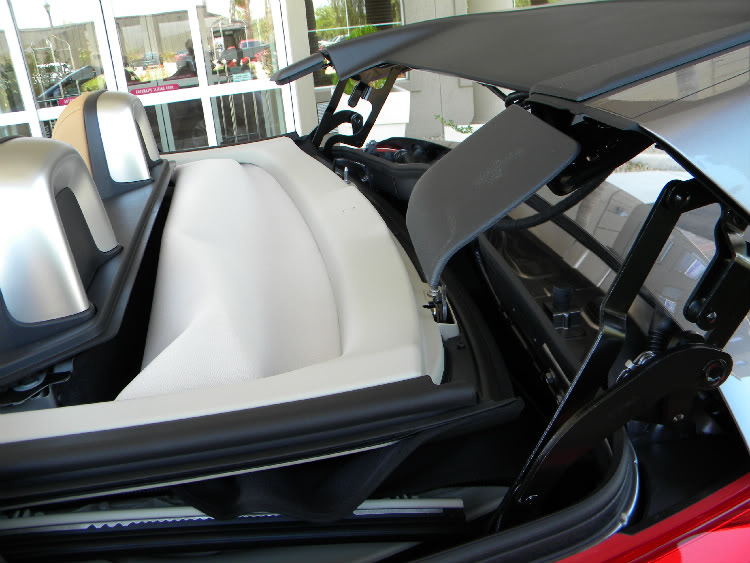 There are a three things that I do hope Nissan works on if they intend on making another generation.

– The wind noise coming around the C pillar on the driver’s side is very loud and distracting. When a big rig went blowing past me, it was so loud it scared me because I didn’t know what it was.
– The two windows in the top should become just one (or delete the upper one). Rear visibility isn’t that good to begin with; having two small windows instead of one big one doesn’t help. The fact that it is made of glass though, is a very nice touch.
– The price. $46,390 is a lot of money to pay for a car in this economy, especially something many people would view as a pleasure vehicle and not a daily driver.

I’m guessing that Nissan had a niche market in mind for the CrossCabriolet when they decided to build it and I am OK with not being part of that market. I predict that this will be a very big hit with the 45+ set who would love to have a convertible that could haul themselves and their friends to dinner. I could see it becoming quite popular where I live, right next door to the largest retirement community in the world. I also think Nissan dealers could use this car to sell a lot more of another one on their lots. If they can get people into the CrossCabriolet for a test drive and the customer balks on either the exterior styling or the price, the salesman will be able to suggest a standard Murano. It has the same luxuries, more room, two more doors, and it costs less. It made me want to test drive one even though we have no need for another car.

To Kevin and Charlie at Peoria Nissan: without your help we wouldn’t be able to do what we do so many thanks to you both. To our readers: if you live near Peoria, Arizona and you are in the market for a Nissan, you should stop by for a test drive. They will treat you well.

The author, Becky Childs (aka nissangirl74), is the Business Manager for NICOclub.com.