The Infiniti Etherea Concept — US Debut at Pebble Beach

First unveiled at the 2011 Geneva Auto Show, the Infiniti Etherea concept car was presented at the 2011 Concours d’Elegance at Pebble Beach for its U.S. debut. A NICOclub.com moderator attended the event (along with his barely teenage son—a car nut who took all the stunning photographs below!) to report on this U.S. unveiling.

(Click on the thumb-nail images for higher resolution pictures.) 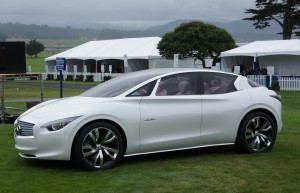 The Etherea concept is a stunning five-door, hybrid hatchback, relatively small (just over 14 feet long at about 172 inches), but surprisingly spacious inside for four people!

It has some radical design features that may not survive through to any final car built on this concept. This is not entirely surprising—most concept cars are just that: a presentation of design elements that evolve into actual implementations that go into production when the car is actually released! 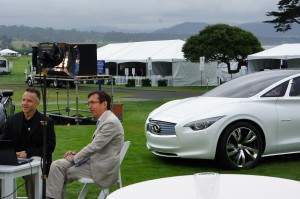 The Etherea sat next to a few other models in the current Infiniti lineup, against the beautiful backdrop of the Pacific Ocean, at the Lodge at Pebble Beach. 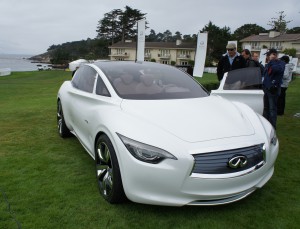 Although a bit of a dull day, without much direct sunlight, the beautiful and deep ivory pearl paint on the vehicle stood out beautifully on the lush green lawn. My son took tons of high-resolution pictures; unfortunately, we can only show a few of them here! 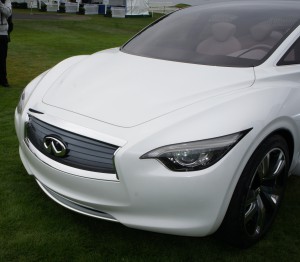 The front of the Etherea is sharp and clean, but not too unusual actually. The headlights, grille and large Infiniti badge would look perfectly at home on many of the current Infiniti models, although the light-up grille (blue lighting at night) is an unusual bling feature.

The body and front bumper blend together, without a seam to mar the looks or disturb the smooth airflow over the car.

This is probably the largest Infiniti grille emblem that I have seen on an Infiniti since the original 1990-96 Infiniti Q45 (although that first model had somewhat old-fashioned filigree lines and curves inside the symbol). 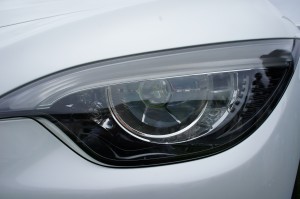 A close-up of the front headlights shows a look that is similar to the current generation Infiniti G and M, but more aggressive, of course! 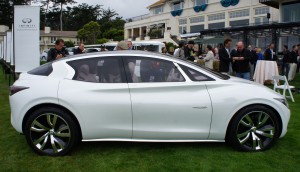 From the side, the Etherea lines are clean, swoopy and rounded, with some design elements vaguely reminiscent of the Infiniti Essence Concept introduced some years ago. The Etherea has large 20” wheels on a very long wheelbase, which should provide good stability and control.

The “almost a teardrop” rounded body shape should result in an ultra-low coefficient of drag. The hood length is somewhat short, but not stubby in relation to the rest of the car. But … hmmm … where are the wipers going to go in the final production car?

The roof is a large expanse of lightly darkened glass that extends all the way from the front to the rear of the car and makes the interior very bright and airy. The front windshield glass extends over the driver and rear passenger area without a break (that we could see), although the hatchback clearly requires a separate glass section.

For safety in a future production vehicle, it is likely that this large expanse of glass will receive additional bracing (or be produced in multiple sections perhaps). This will detract a bit from the open feel, I suspect, but should still provide quite a dramatic “open to the sky” effect. 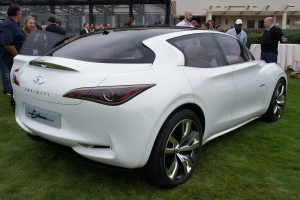 Like the front, the body and rear bumper are fully blended together, without a seam to differentiate them. The exhaust tips are flush set with the bumper/body, without much of a gap between the body and stainless exhaust tips.

The angled C pillar is similar to the current-generation M design, although the curve is fully built into the pillar itself—without the side glass that forms part of the curve in the M. From the rear, this angling is more pronounced when looking at the glass that curves down from the roof.

So far, nothing too dramatically radical yet, but wait till you see the rear doors open (there is a hint in the above picture). 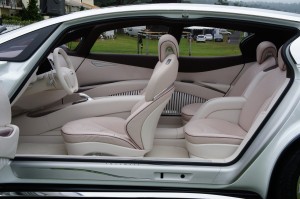 The front and rear doors swing open and apart very wide without any central B pillar—old-style suicide doors! This makes for incredibly easy egress in and out of the vehicle –particularly for the rear seating area. The rear door hinge is unusual (more on that in a minute) and does not impinge on the entrance to the rear seats.

The driver seating position appears perfect, albeit a tad higher than a traditional small sedan, but rear seat leg room is a bit more cramped for adults – this is to be expected given the external dimensions and “compact car” target.

Since this is a front-drive car (not a first for the Infiniti line—the now-discontinued G20 was also front-wheel drive), there is no large transmission tunnel to the rear, This makes for a remarkably flat floor that contributes to the sense of easy access and inviting openness. (The hump between the rear seats is designed to stiffen the car rather than serve as a transmission tunnel.) 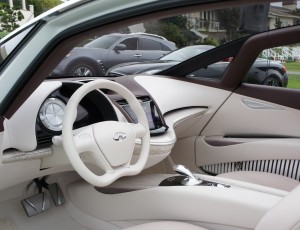 The inside lines are just as clean and swoopy as the outside—the vertical accents on the doors look like bamboo slats, and break up the starkness of the design. I have to admit that I could do without the light pink color of the leather on the seats and other trim areas. Although I suppose a pure white everywhere might have been too intense and stark!

The interior is surprisingly spacious and open. The dash and console are curved and flow well into the rest of the interior. There are a minimum of buttons and other clutter, yet it is a futuristic design. Much of the control and information is displayed on integrated screens in front of the driver, in the center of the dash above the console, and around the “shift” lever.

The brake and accelerator pedals are aesthetically patterned, making one want to drive the car in socks (or bare feet)—no shoes to get in the way of the feel of those pedals!

Of course, given the light interior, dirty shoes are likely to be a disaster! At the Lodge presentation, everyone clearly refrained from entering the car with their shoes on—given that we had all walked on the damp green grass of the lawn to reach the car!

This picture also shows you the glass windshield as it extends to the roof, without a break, over the head of the driver and front passenger and on to the back. 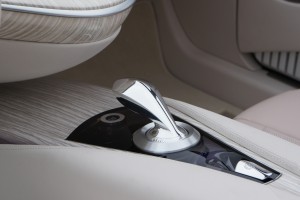 A close-up of the “shift” lever and location of the engine start-stop button. 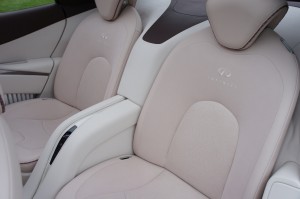 The rear seating area is intended for two passengers—shown above without the seat belts and other stuff that a production car would require, of course!

The contrast—albeit mild—between the pink leather of the seats and the white interior color is more obvious in this picture. 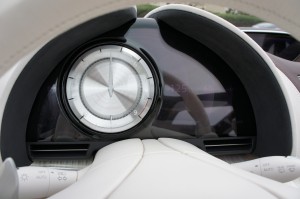 A close-up of the dash instruments—a combination of analog and digital displays. This panel is aimed at the driver, for the information that the driver needs. But the passenger in the right front seat is not ignored. They have access to the climate controls and stereo in the center of the dash, i.e., to all the controls that are not related to driving. 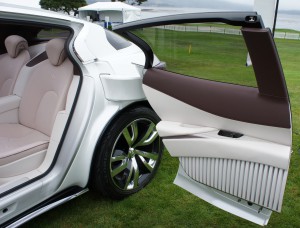 Probably the most unusual design element in the vehicle is the single rotating hinge of the rear door. This eliminates any unsightly hinges that might interfere with entering and exiting the rear seating area. Of course, the hinge probably intrudes a bit into the rear fender above the wheels, or the trunk space, as it operates!

But, it is still so-o-o cool looking and clearly functional! 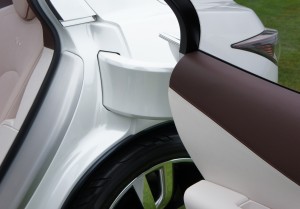 A close-up of the rear door hinge. The door swings wide towards the rear and makes it very easy to enter the car. 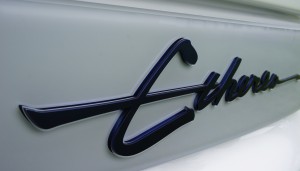 The engine is expected to be a super-charged 2.5 liter 4-cylinder engine, with 245 horsepower, connected through a continuously variable transmission (“CVT”) to the front wheels—apparently a Mercedes-Benz engine and platform. The “hybrid” badging highlights the presence of an electric motor for low-speed use, but there were no details presented on its performance, although it is probably similar to the current M35h hybrid.

Rumors suggest that the 2.5 liter V-6 from the Infiniti G25 may be an option for the car when it is ultimately released (within a few years). However, given the front-wheel drive of the concept platform (from Mercedes-Benz, as mentioned), this may be just rumors that do not materialize in reality. Of course, the steering wheel paddle shifters are somewhat unusual for a CVT geared car … so, it is not clear what purpose those serve yet!

So what is the target market for this compact luxury hybrid? It appears to be aimed at a population of younger buyers who will enjoy the aggressive look and radical design elements of this model. And, yet, it possesses all the luxury elements required for this upscale market.

As Infiniti’s press release put it, “Etherea can be summed up as a four-door coupe with five-door practicality—a hatchback that doesn’t look like a hatchback”. At the 2011 Geneva Auto Show, Shiro Nakamura added, “The Etherea is completely different from current luxury compact cars. It is appropriate for a new generation of drivers who think of themselves as different”.