A month ago, I was in the market for new tires for NICO’s Project G35 and began researching my options. Coincidentally, around the same time, Nitto was bringing their new flagship ultra-high performance tire to market. The INVO is a new and unique tire developed over the last few years, and was just released for retail sale.

The staff at Nitto asked if I’d like to be one of the first customers in the U.S. with the opportunity to conduct some real-world testing.

As a self-professed “tire whore”, who could turn down such an offer?

Fresh from the alignment shop, and down to the wear bars on my Michelin Pilot Sports, I agreed to try the INVO tires on Project G35, and to write an unbiased and honest review after several hundred miles.

Described as a great blend of comfort and high performance, and with an asymmetrical tread pattern, these tires also have the ability to be rotated on staggered fitments, something relatively uncommon to ultra-high performance tires. This was pretty important to me, as the G35 is known for unevenly wearing tires, regardless of suspension settings.

Upon delivery, the the first thing I noticed was the INVO’s revolutionary and asymmetrical tread design. It really stands out, and I have to admit I was somewhat taken aback by the striking appearance. My first thought was, “Did Pablo Picasso design these? Is this someone’s idea of art?” It’s readily apparent that aesthetics were very important in the design of this tire, and upon closer inspection, the attention to detail was quite impressive. No excessive “flashing” (the thin ribbons of leftover rubber that peel off on the outer edge of a new tire), and no “whiskers”. Sidewall design and lettering is crisp and clean, as if it were precision-carved in onyx. Very, very impressive. The tread lines and grooves appeared to be completely consistent, like the body panel gaps on an expensive luxury car. 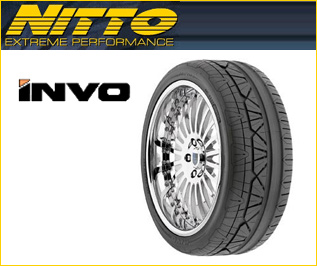 Revolutionary Tread Design
Nitto describes the INVO’s unusual tread design as offering the perfect balance between art and engineering. The tread blocks are comprised of sharp angles and criss-crossing grooves, and less fluid curvature, obviously inspired by racing tire tread designs from decades past. The inner half of the tire is made up of solid blocks with larger voids, while the outside shoulder has narrow channels (known to tire aficionados as “sipes”) and increased surface area to optimize dry performance, handling, and grip. Indeed, the INVO looks like 2 seperate tire designs, the mating of an R-compound autocross tire and an all-season Z-rated performance tire. The two halves are separated by a large channel designed specifically to prevent hydroplaning.Interestingly, the tire is non-directional, a huge plus for the consumer who wishes to maximize tire life through frequent rotation and rebalancing.

The Science of Sound
Aggressive-looking tires typically are accompanied by increased noise and poor wear characteristics. Because of these characteristically aggressive tread patterns and the requisite compounds, high-performance tires are also often quite noisy. In the quest for better performance, most of us overlook such matters and accept tire noise as a necessary evil.

However, Nitto has developed a unique computer simulation software to identify and engineer the sounds of the tire.Interestingly, for most high-performance tires, as tire noise increases, treadlife suffers. Therefore, hundreds of thousands of permutations of tread block arrangements and spacing were tested via this simulator to obtain the quietest possible tread.Variable pitch 3-D blocks are utilized to reduce road noise. The side effect of these efforts is increased tread life, without sacrificing traction or ride comfort.

Impressions
NOTE: All testing for this article was done with Traction Control disabled so as to get a true impression of the INVO’s handling characteristics. The comments in this article represent approximately 800 miles of testing, and were conducted in a G35 Coupe with mild modifications (Tein S-Tech 350Z springs, Tokico D-Spec adjustable shocks, NISMO headers and catback, Kinetix manifold, Stillen Popcharger).

It used to be if you wanted a good high-performance tire, it was at the sacrifice of comfort and multi-season driveability. No so with the INVO. The outer shoulder behaves like a track tire, providing an uninterrupted contact patch for maximum dry traction and responsive steering feedback. Turn-in is exceptional and the sidewall appears to be somewhat stiffer than the (albeit worn) Pilot Sports they replaced. The silica-reinforced tread blocks delivered exceptional lateral and longitudinal grip even with asphalt temperatures hovering near 160 degrees. There’s a nifty concrete-paved 270-degree circular offramp near my residence that feeds into a corporate complex and is virtually vacant on the weekends. Several progressively-faster attacks of said offramp revealed the INVO’s strengths, namely predictable and stable lateral grip. Squeal and howl was nonexistent. Gentle tire scrub was finally achieved at more than double the posted speed limit, and easily remedied with slight steering input and a tad less throttle – No throttle-off oversteer or anything that would alarm the attentive driver.

If you’re accustomed to the drone, hum or “sizzle” sounds of some performance-rated tires, the INVO might disappoint. They’re deceptively quiet, so for those of you who pay more attention to the feel of the car and prevailing conditions when modulating speed, you MAY want to invest in a good radar detector (or reacquire a habit of glancing at the speedometer periodically). On reclaimed-rubber surfaces (such as a certain freeway here in the Phoenix Metro area) triple-digit speeds reveal an eerie condition – that of wind noise exceeding tire noise. Again, for the attentive and enthusiastic driver, it’s a unique and unusual sensation.

The INVO is touted as a “three-season” tire, not especially suited for winter-weather driving, so don’t plan on these in snowy climates unless you’ve got winter tires to switch to on a seasonal basis. At this time of year, I didn’t expect an opportunity to test the INVO’s wet-weather handling characteristics. But just hours before I sat down to write this article, Mother Nature graced the Arizona desert with a real downpour, and I found an excuse to go “play in the rain” (hey, it’s work). I expected to find the INVO less-than-capable in standing water based on its design. However, despite their “race-inspired” appearance, they performed admirably in the wet. Lateral breakaway was predictable, just like in dry conditions, and it felt progressive (no surprises). You could theoretically “push” these tires a little harder in wet weather than a typical all-season without fear of consequence. High-speed runs on a fresh asphalt freeway in driving rain revealed no weird quirks or characteristics, and lane-change maneuvers were conducted without drama.

“Our goal with the INVO was to advance our tire development technology,” says Mr. Nishihata, head of Nitto corporate technology. “In the end, we knew we had a winner with the aggressive tread design, high performance threshold and low noise residual. It’s an elegant display of the harmony between art and engineering.”

I’d have to agree with Mr. Nishihata – Nitto has come up with a solid performer, and I’m enjoying them immensely. Thanks to the engineers and staff at Nitto for a job well done.