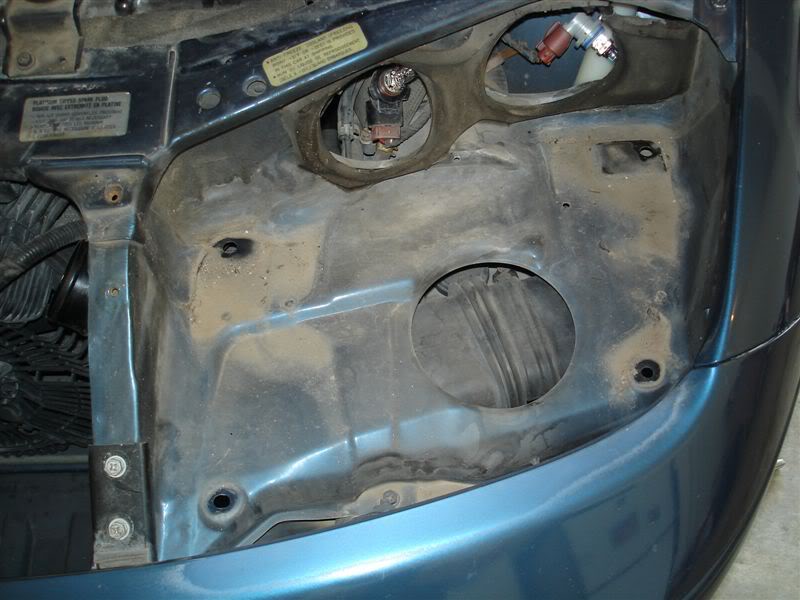 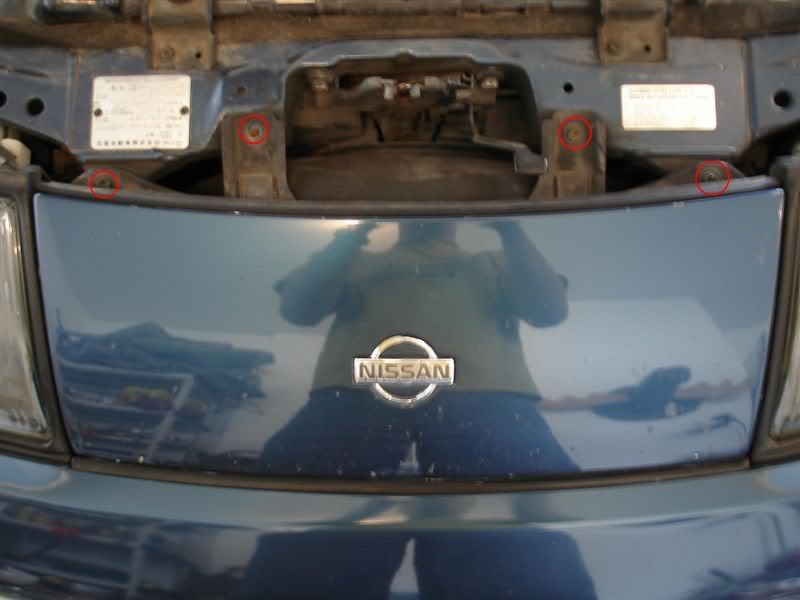 3. Remove the MAF harness (red circle) and remove your intake (blue circle)(you guys with stock airboxes, this step will be a little harder because you will have to remove the whole airbox I believe) 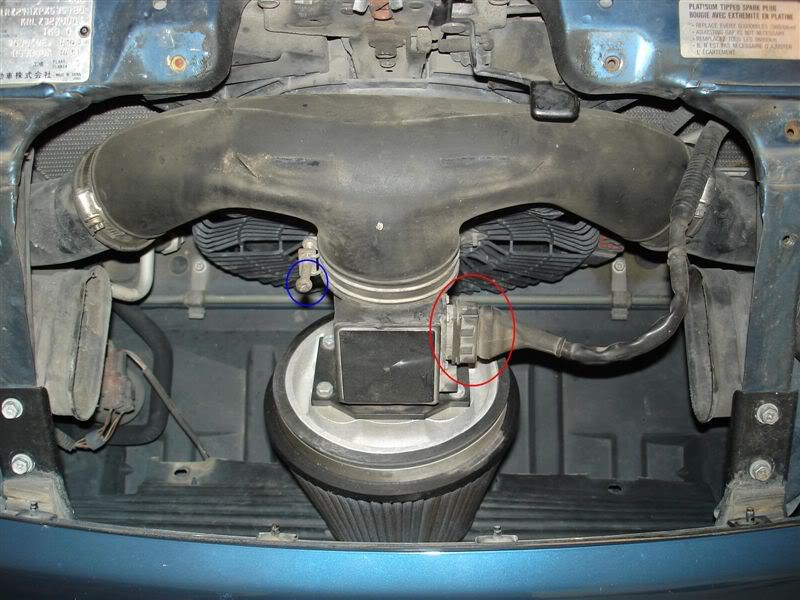 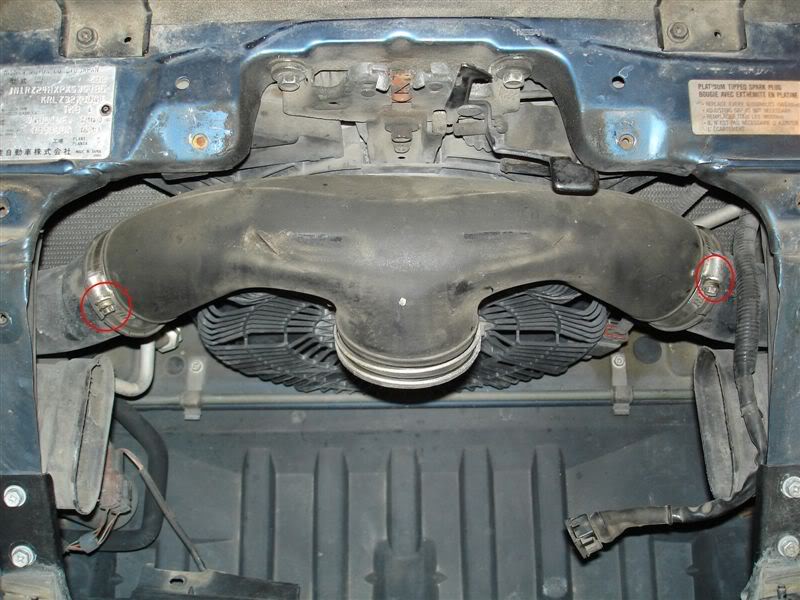 5. On Twin Turbo models, I believe you have to also remove the recirc. valves at this point. 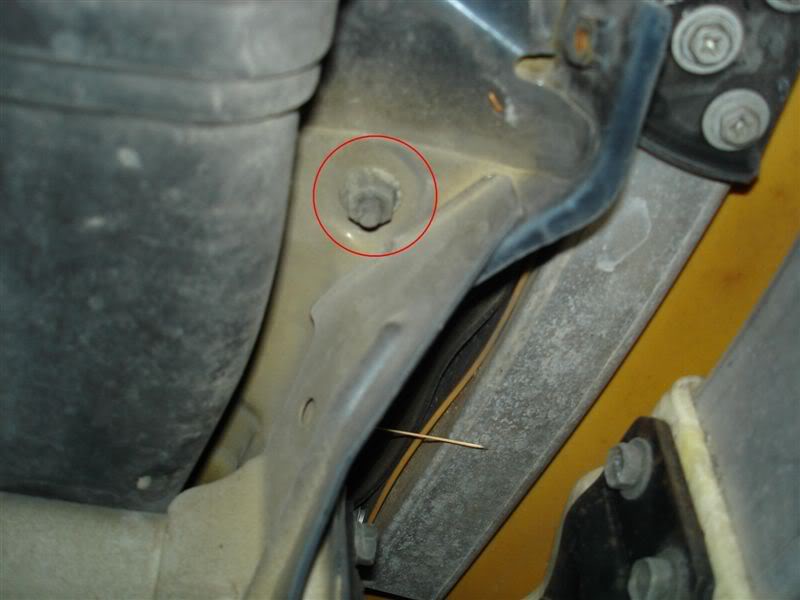 7. Remove the rear 12mm bolt nearest to the center of the car (red circle) 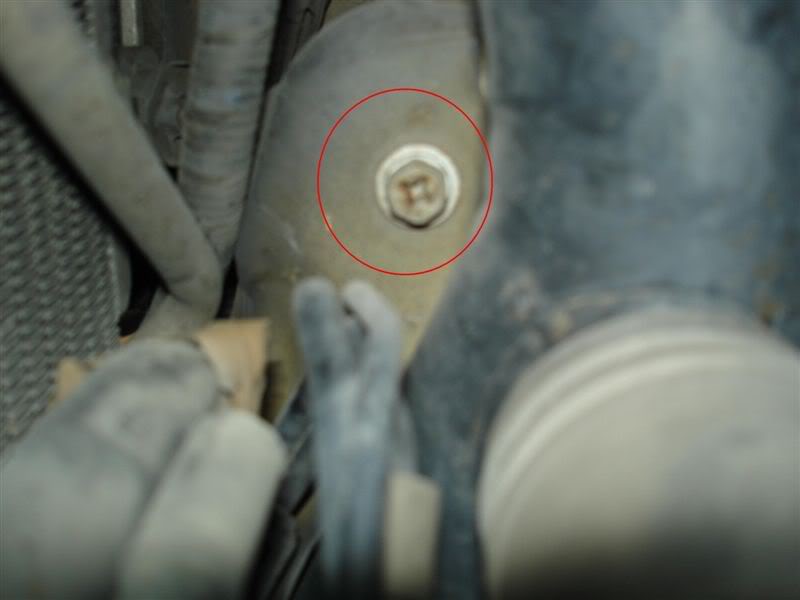 8. Do the same for the other headlight. 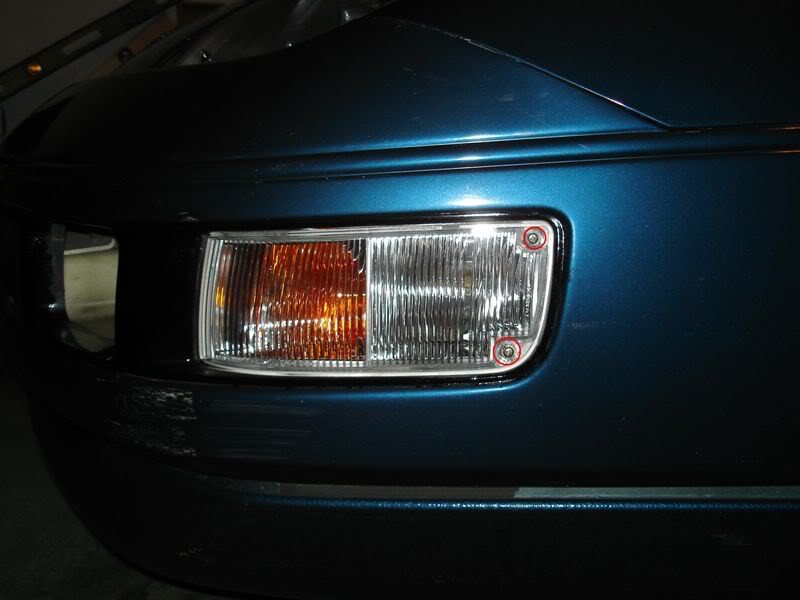 10. Going through the hole left by the turn signal, remove the front 12mm nut that is to the outside of the car (red circle) 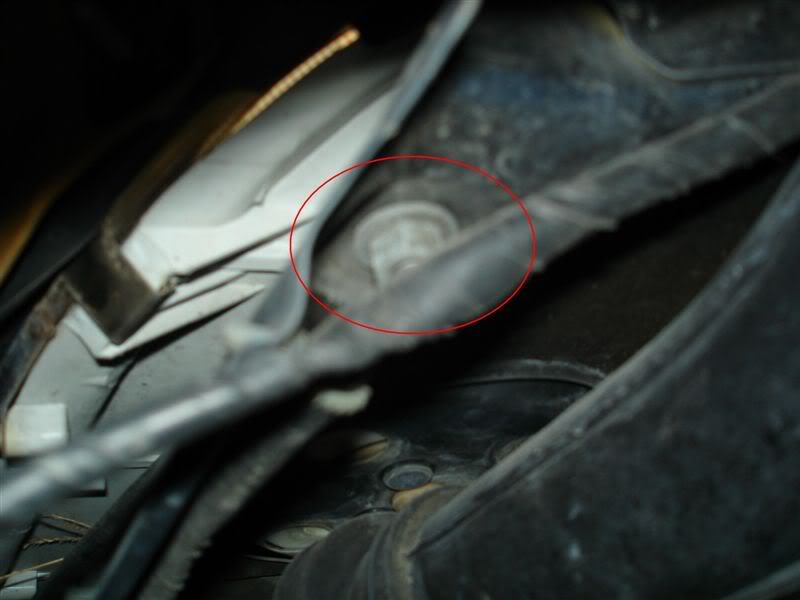 12. Now for the hard part. For the drivers side, turn the wheels all the way to the right and take out four 10mm bolts along the wheel well splash guard and pull back to get access to the final 12mm bolt on the rear of the headlight. 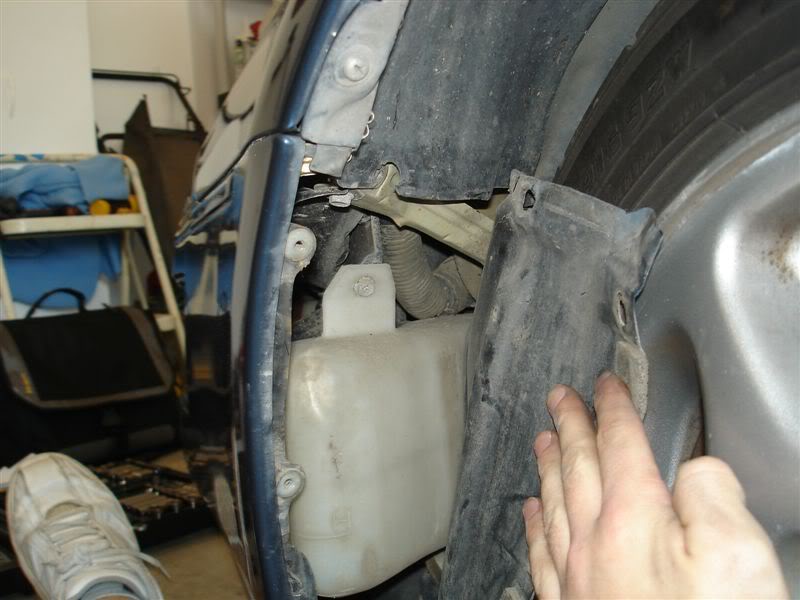 13. Here is the bolt you are trying to get to. This is the easier of the two (red circle). 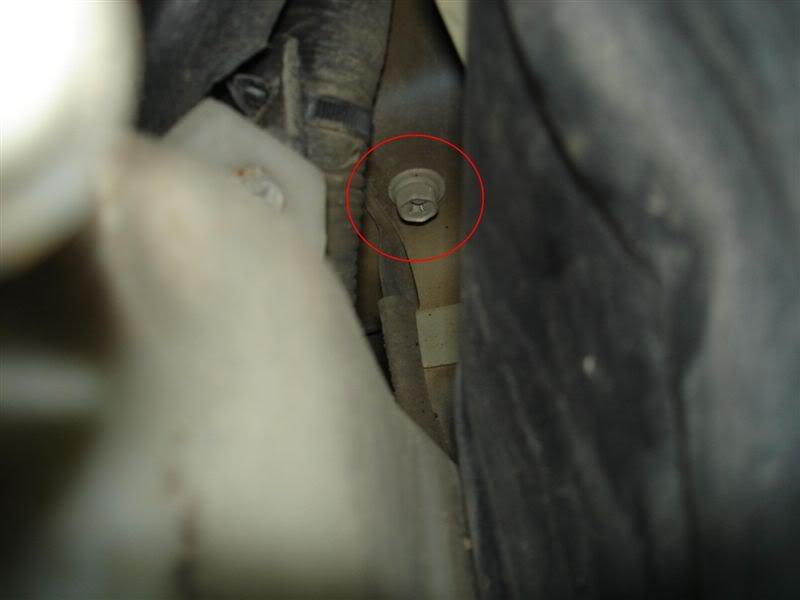 14. Now for the passenger side. Turn te wheels all the way to the left and take out four 10mm bolts out of the wheel well splash guard and also take out the two top phillips screws out of the top of the wheel well splash guard to gain easier access to the bolt. When you pull back the splash guard, you will see an box with a couple vacuum hoses coming out of it and an electrical connection. This box is connected to the body by one 10mm bolt and remove this to get it out of your way to get easier access to the 12mm bolt on the headlight (red circle). 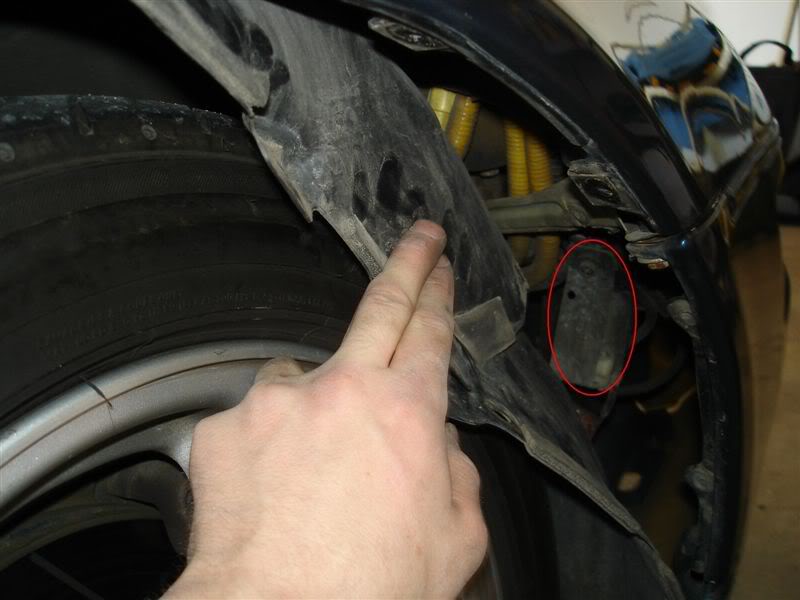 15. Due to the wires running right next to the final bolt at the rear of the headlight, you will have to have a ratchet with small head on it. Here is an ok picture of the bolt (red circle). 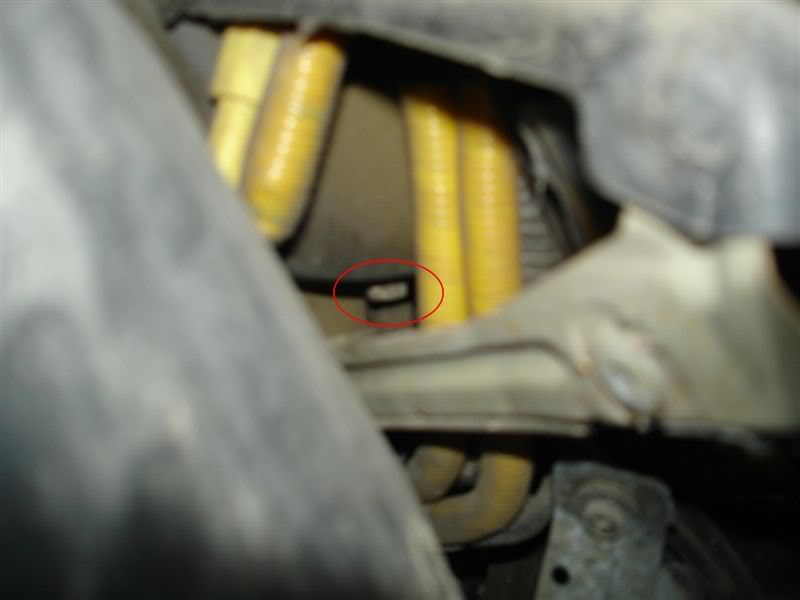 16. After removing this final bolt, you will be able to take out the headlights. Take out the bulbs first and then you will have to pull up and out at the same time. They are a little difficult to get out.

17. Reverse the steps to reinstall.

Z32: How to make padded armrests!