So, I finally decided that my 2004 G35 needs some stiffening of the sub-frame. Being a NICO supporter, I looked through the Advertisers Directory to see which sponsors had parts I may be interested in. This brought me to the bracing products made by GTSPEC. For those unfamiliar, GTSPEC is a supplier of high quality suspension, performance and styling products to a wide enthusiasts market. Utilizing military-grade materials and superior construction techniques is what drew me to their product line. I called Ken at GTSPEC to determine an appropriate dealer and within a few minutes I had ordered all of the different bracing pieces for my car.

Ordering was quick and easy and the in-house parts shipped out that same day! Of the parts I ordered, the front tie brace and the FSTB, which I have decided to make fit on my G35, were currently out of stock so they will be shipped out in two weeks once they have been replenished. Both will be shipped out together and I will document the installation of these parts at a later time.

Fast forward one week. I get home from work today, and there is a well-packaged box with some nice looking braces inside. With this shipment, I received the rear lower tie brace, the rear lateral arm brace, and the four point mid chassis reinforcement brace. Now, these are a quad chamber design, they are really lightweight, and to my surprise, extremely strong. There is absolutely no flex or bend to these braces. 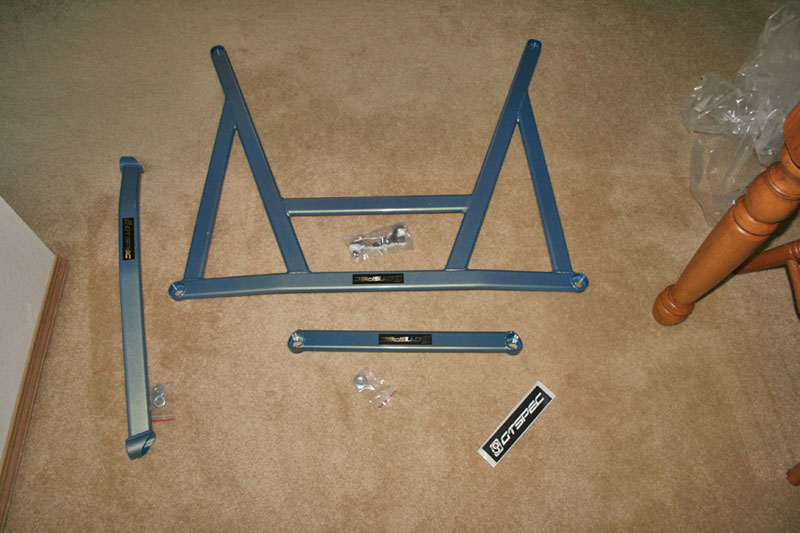 Tools Needed:
1/2″ drive socket wrench
17mm socket
19mm socket with 3″ extension (you may also use a 3/8″ socket and a breaker bar)
Jack Stands (or ramps if jacks are not available)
Hydraulic Jack
A torque wrench is strongly suggested.

I go outside, and put the G35 up on jack stands. It is rather important that you make sure that the jack stands are the same height, since you don’t want any twist in your frame during installation. I decide to install the four point brace first. I slide the brace underneath the car, and look at the mounting location. Here’s where I was impressed. There is simply no room for error on these mounting points, and GTSPEC nailed them dead on. 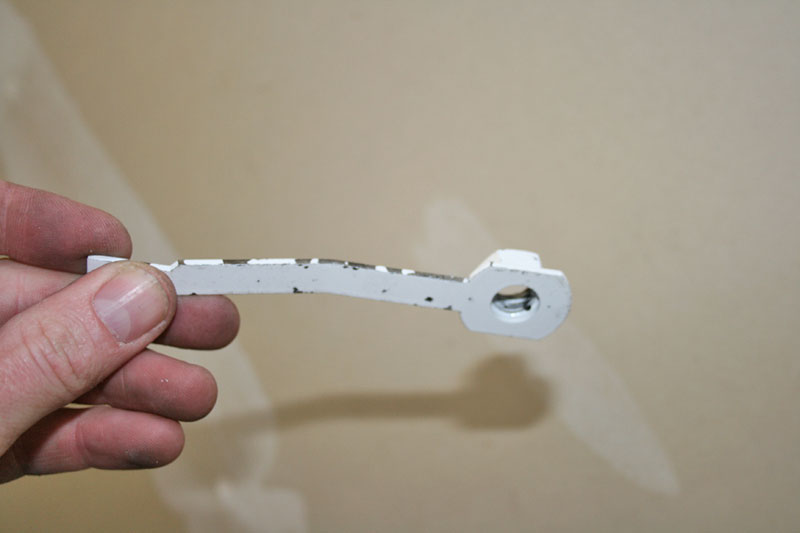 They include a nut that is attached to an odd looking piece of metal. Quickly I realize that it is a handle, so you can push the nut into position easily. Slide the nut and handle (nut first) into the large hole. You can now use your finger and the handle to place the nut directly over the hole. 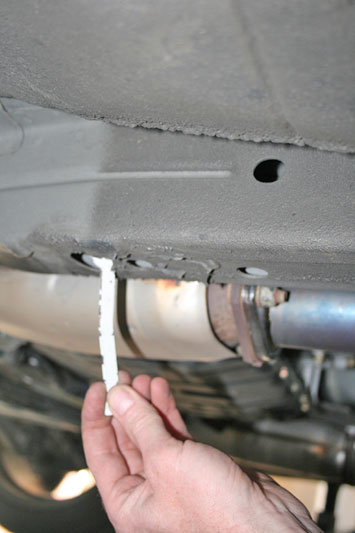 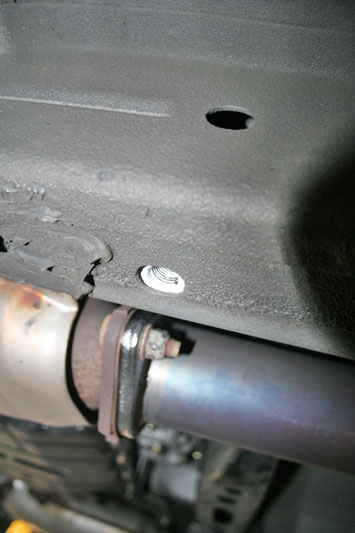 Push the brace up, and using a 19mm socket, attach at this point. Keep all bolts loose for now. Attach the second front bolt the same way. Slide toward the back, and take a 17mm socket, and you will see where these bolts should attach. The bolts are the perfect size, and were plenty hard enough to tap its threads into the sub-frame. One you have all the bolts secure, tighten in a crisscross pattern as if it were a wheel. 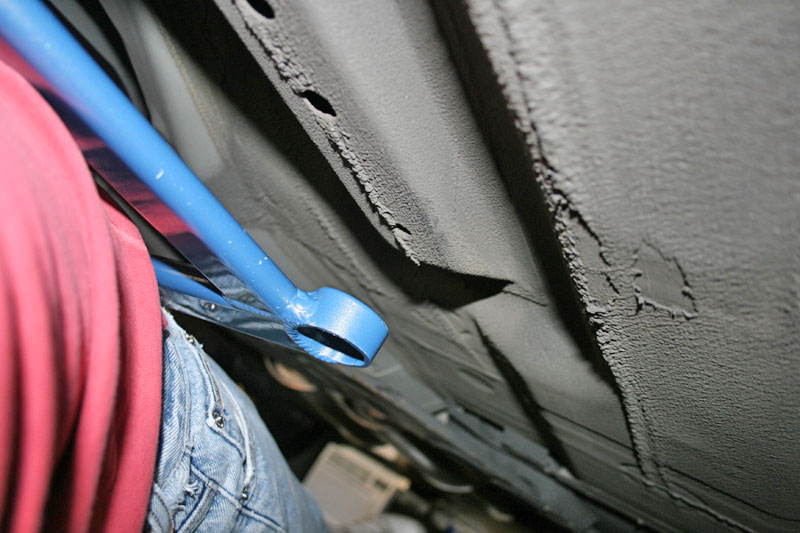 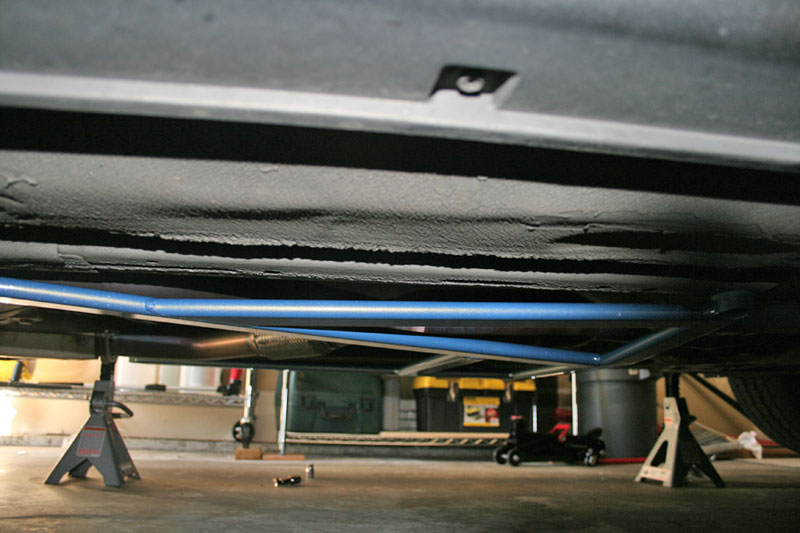 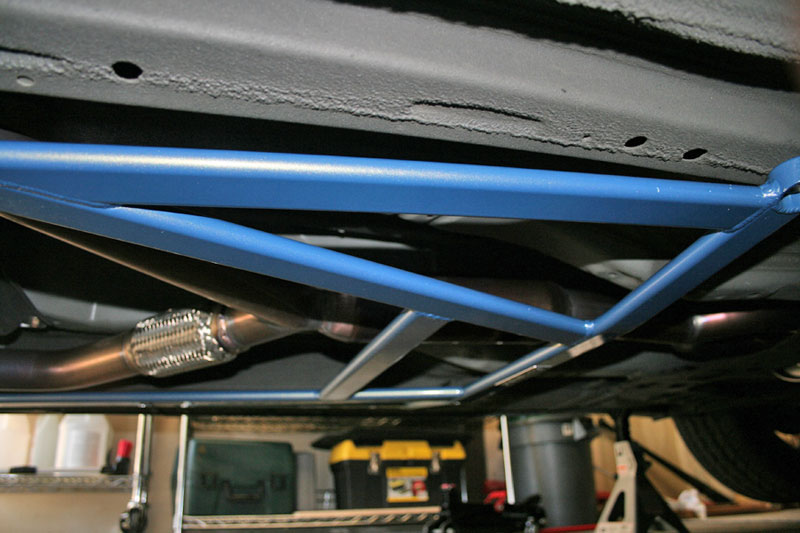 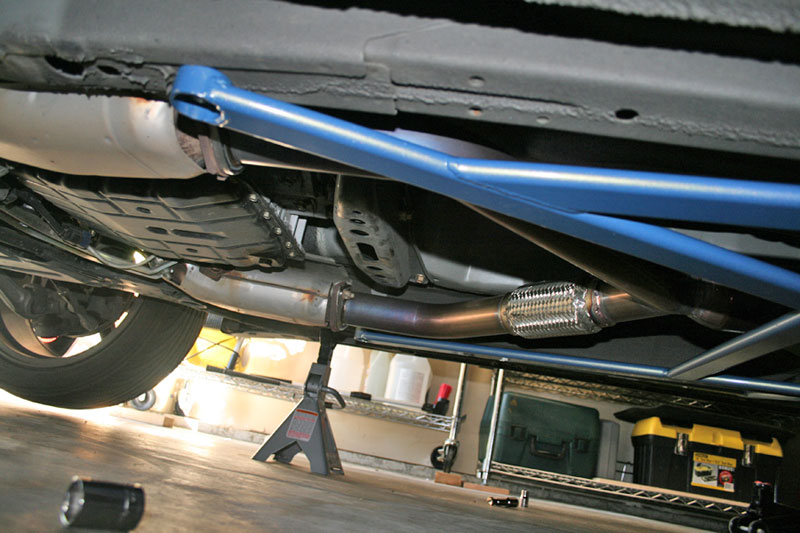 Note: when taking off these nuts, it is not at all necessary to pull the bolt. Doing so could cause you more problems than it’s worth. 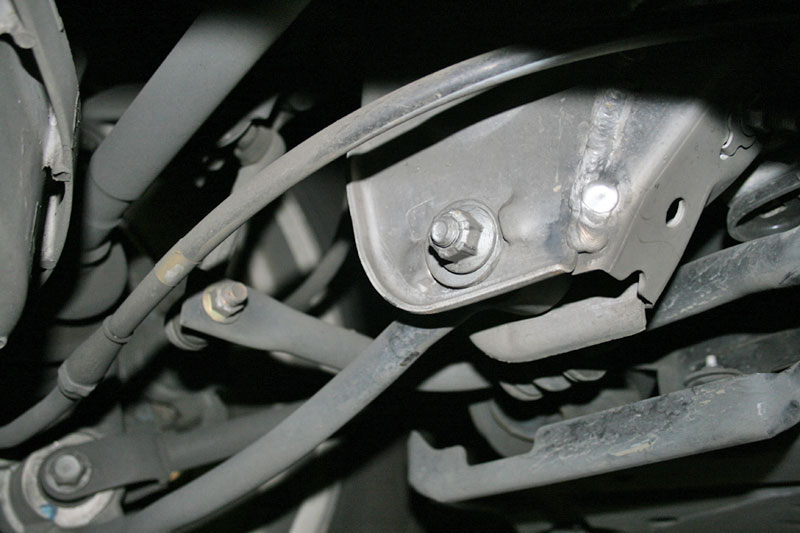 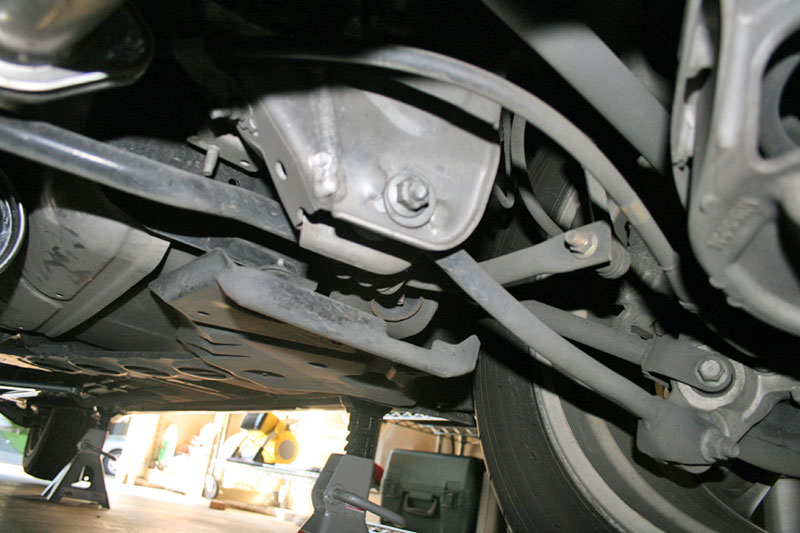 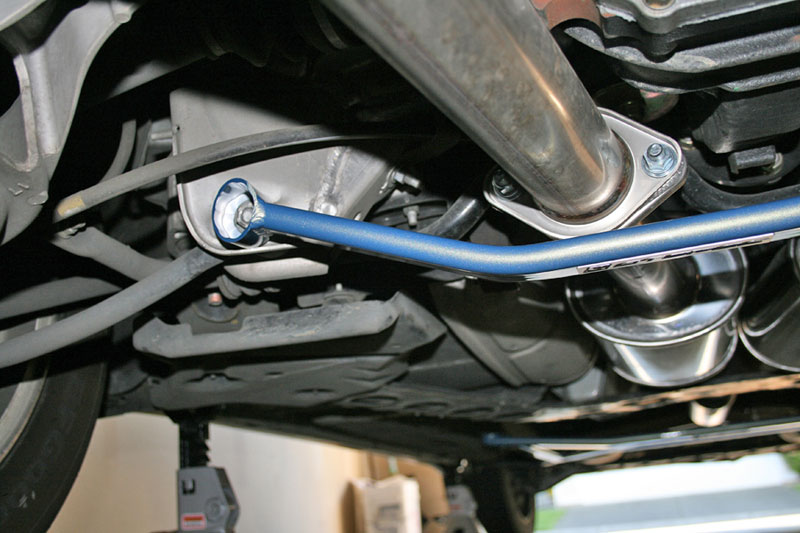 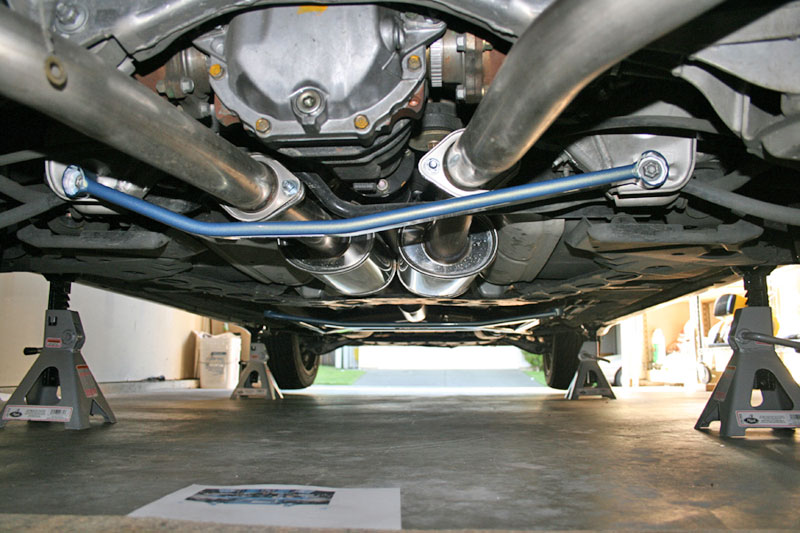 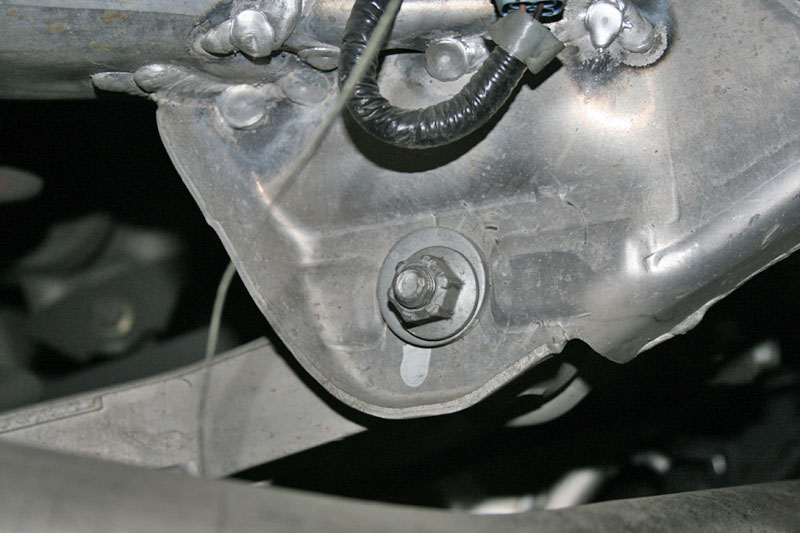 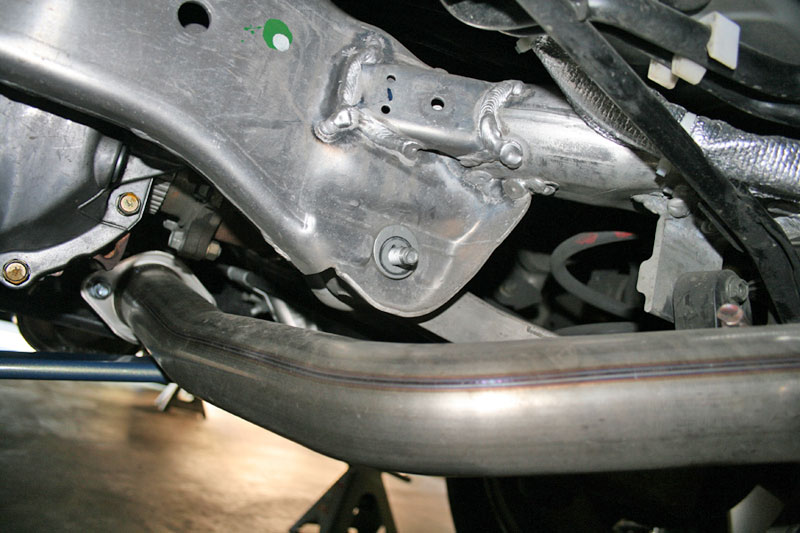 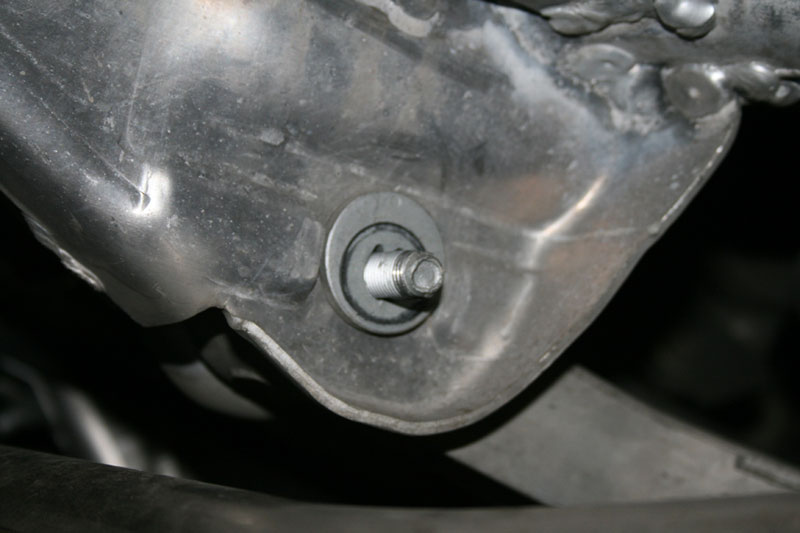 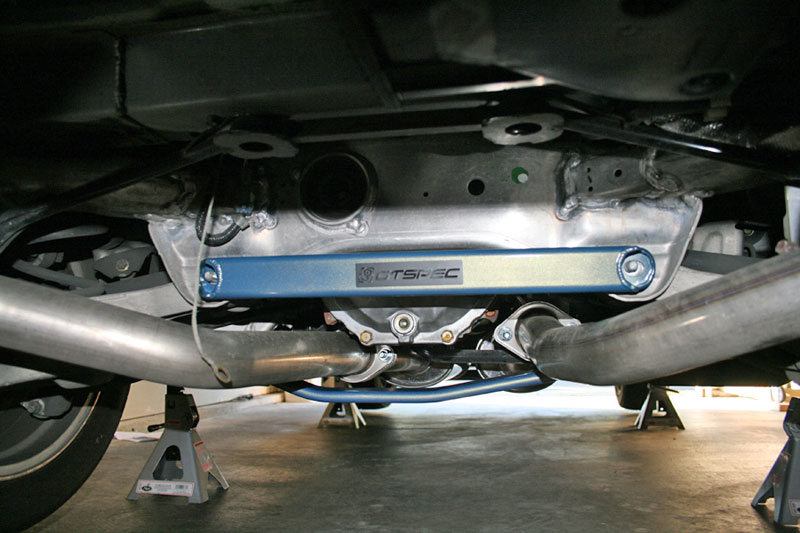 Road Test and Impressions
There is an abandoned road near my house. I had taken the G35 out a few days prior to the installation and in the hardest turns I pushed it until the vehicle felt unstable. The fastest I was able to make it through any of the turns that day was 48 MPH. After the installation, I took her back out and ran through the same turns. This time there was a significant difference in the handling, stability and feel at speeds. I ended up running through the same turns at 61 MPH. Amazingly, 61 MPH didn’t feel unstable in the least. I considered pushing it further but decided I would not risk wrecking the car, thus I planned on calling it a day.

Another observation happened while I was turning around on this road as it is quite narrow. You either make a 5 point turn, or crank the wheel and slide the back end around which is my general approach to turnarounds of this nature or U-turns in general. However, this time when I stomped the gas, the back end came around much more quickly due to the noticeable lack of chassis flex. I also noticed that the entrance and exit from my driveway was a lot smoother as is driving down the generally bumpy roads here in Washington State.

All in all, I have to give it to the guys at GTSPEC and I feel these modifications are well worth the cost. I am really impressed in how much of a difference it has made just by stiffening up the chassis. Not only is my car better on twisty roads, but has a much smoother ride for daily driving as well. Now I really can’t wait for the front end parts to arrive and anticipation is killing me.

If you are considering a new mod for your car or not happy with the stock suspension, give the guys at GTSPEC a call. They will sort you out, and have you in disbelief at how your car will handle!