Automotive speed enthusiasts are always looking for the latest gadget to throw at their vehicle in pursuit of increased horsepower. As auto manufacturers strive to somewhat meet these consumers needs by releasing models with increased output (Less restrictive intake and exhaust systems, more aggressive ECU tunes and larger/more powerful engines are examples), the aftermarket parts manufacturers strive to supply owners with alternative designs to meet this growing demand for more power. Aftermarket products can vary widely from a simple intake to complex forced induction kits and it is up to the consumer to determine what they are looking for and how much they are willing to pay in order to meet their own goals.

Upon releasing a new product, aftermarket manufacturers usually post up dyno (Chassis Dynamometer) graphs to show how much power their “test mule” was able to put out while utilizing this new product.Hence, an expectation level is set for that product to the target consumer. For those not “in the know”, a dyno is a machine used to measure torque and rotational speed (RPM) from which power produced by an engine may be calculated. During this test,the vehicle is strapped down to the dyno and air is blown over the engine via a fan to assist with cooling while imitating airflow since the vehicle is stationary. The vehicle then performs a “run” which is measured and graphed. The question is, are these stated graphs to be trusted? The answer is “no”.

Wait, did I just state that the whole aftermarket community is falsifying information in order to obtain a sale?Of course not. I am simply saying that there is more than meets the eye in regards to the gains that are claimed as attributed to these individual parts and that the peak levels shown on these dyno graphs can be misleading.In some cases, they can be absolutely false as well. Let’s look at some of the ways that a dyno graph can be misleading or that peak output may be manipulated. 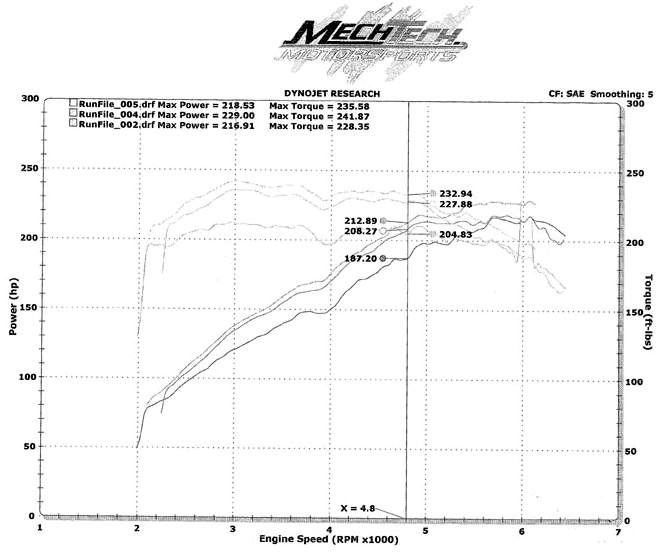 Engines produce the most peak horsepower when they are cold. As the engine comes up to normal operating temperatures, peak output will settle to a lower level. Extensively running the motor will lead to “heat soak” which further lowers an engines output. It is very easy for manufacturers to post peak cold-engine dyno results in comparison to baseline results that were performed on a hot or heat soaked motor. An example of this is the 2002 Nissan Performance Magazine test of the Nismo intake on a 3.5L Altima. Should you read the article, you will note they show 12.9whp increase and 25.6whp peak during their dyno test. If you read further, you will see that their peak numbers were during a “cold” run. The dyno charts on that article tell the real story as base-line (run 2) showed 216.91whp, run 4 (cold run) with the intake shows 229whp and run 5 (intake with hot engine)shows 218.53whp. So in effect, a hot-run base-line was 216.91 and a hot-run with the intake was 218.53whpwhich results in the aftermarket intake providing +1.62whp. That’s a far cry from 12.9whp as initially claimed.

Temperature
The warmer the temperature the less power will be made. Performing a base-line test during a hot afternoon while performing a post-install test in the cooler evening air will give better results to the later dynotest.

Being crooked
While it is highly doubtful that major manufacturers would partake in such, there are ways to change the dyno or the environment itself to give better numbers if desired. Crooked dyno operators can adjust the weight of the drum, adjust the straps holding the vehicle down, program the dyno to a different air temperature level or SAE correction levels, adjust the dyno elevation and reprogram the weight of the drum itself. Additionally, having the A/C running for the base run, not opening the hood and using a fan for airflow or performing the tests in different gears can also give the illusion that the “part” is better than it is .Finally, a base-run from a completely separate vehicle could easily be utilized.

Owners of the parts themselves can easily mistake power gains based upon perception. This is usually referred to as a “butt-dyno” in the sense that the owner feels that the vehicle is more powerful without any proof. In the case of a new intake or exhaust system, the butt-dyno again is quite misleading as other senses can lead to this perception. Think about it for a minute. You know you have a new “performance” part installed and the engine is much louder during a WOT run.  Thus, you perceive more power when that power may not be there at all or is far more minimal than you think. Nothing wrong with that, but perception is not necessarily reality. As with the test mentioned above, do you really think someone can really feel 1.62whp once the car warms up?

With the above said, there is definitely a place for these simple bolt-ons. Since an engine works as an air pump, increasing the amount of air into the motor will somewhat help just as increasing the amount of air that can be dispelled via an exhaust system. Installing both an intake and exhaust system together can actually increase the total amount of power to a higher level than the amount each individual component can offer by themselves. Just be aware of claims vs. reality and do not set your expectation levels too high.

Additional Resources on the ‘Net:
Sport Compact Car:How to Lie With a Dyno
Dr. Dyno: Dyno Dos And Dont’s
Turbo Magazine: Dyno Tricks To Be Aware Of

Article By: Matthew Moody (audtatious) is a NICOclub Administrator
Moodym.com

How to do a compression test on your engine

Crossflow or vertical flow intercoolers: Which to choose?

HOW TO: Choose and/or Adjust your Blow Off Valve