Another NICO exclusive from David Muramoto!

Gleaming in the sunlight, the forged copper Titan XD starts at the push of a button. There’s a familiar rattle as the 5.0-liter twin turbo Cummins V8 diesel spins to life. As the proud owner of a ’08 Titan (King cab, LWB, 2WD), I can’t help but be impressed as the upgraded instrumentation powers up. Both the electroluminescent tach and speedo sweep through their arcs, while the nav and XM music are roused from their electronic slumber. The 7.0” color monitor displays everything from traffic density to fuel and meal options nearby. Heated leather seats are gently warmed, as are my hands on the brown leather steering wheel. Fit and finish of all the interior trim is impressive in this Mississippi-built XD, as I notice everything in the cockpit is that much better than anything in my SE-trim first-gen Titan. About the only downside is reaching for the column mounted gearshift lever, as I already miss the slick little shift knob located on the console of my gas-powered Titan.

But put the six-speed Aisin transmission into ‘D’ and it’s clear that this Titan is leagues ahead of the VK56DE in pulling power. With 310 HP and 555 lb/ft of torque at only 1,600 RPM, this high-tech Cummins powerplant uses a compacted graphite iron block with aluminum heads, twin cams and composite valve covers to create a light, yet strong base. It’s also the first application of the Cummins Holset M2 dual turbo system, with high and low pressure turbos providing a more even delivery across the powerband, as well as better temperature control. The XD’s solid feel is due to Nissan’s heavy duty (HD) truck platform carrying a ponderous 7,480 pounds of curb weight. Driving around town, it has the feel of a ¾ ton truck, even though Nissan is billing it as a segment-busting (a ½ ton truck that really does the job of a 5/8 ton) vehicle. It’s rated to tow up to 12,314 pounds when properly equipped for towing. To test this, my 24’ Dynamax racecar trailer, with SCCA Z racecar, tools and spares loaded inside is pressed into action. The tandem axle trailer alone weighs a whopping 5,400 pounds and the entire package tips the scale at near 9000 pounds. So how would this new Titan fare?

Before answering that question, here’s a quick rundown on the work done to make my Mark I Titan suitable for towing. As a used vehicle, it started with a complete change of all fluids, and the addition of a PML finned and extended tranny pan to add an additional two quart capacity for all that expensive Redline D4 ATF. Of course, new front pads and rotors were needed, and a change to Bilstein HD dampers and Firestone Ride-rite airbags kept the truck from clawing the sky. But pulling up the Titan XD to the weight distributing hitch (scale showed the pin carried 878# of tongue weight), it was a surprise when the XD showed just a bit of rear squat as the trailer weight came to rest on its class 4 hitch. The only unfortunate part of linking up the trailer was the placement of the seven-pin trailer brake/light plug. On the XD, it’s a nicely integrated dual plug on the right side of the license plate recess. My trailer plug is configured to link up underneath the left side of the bumper, near the receiver itself. This meant the cord linking the seven-pin connector on the XD was short by almost a foot. 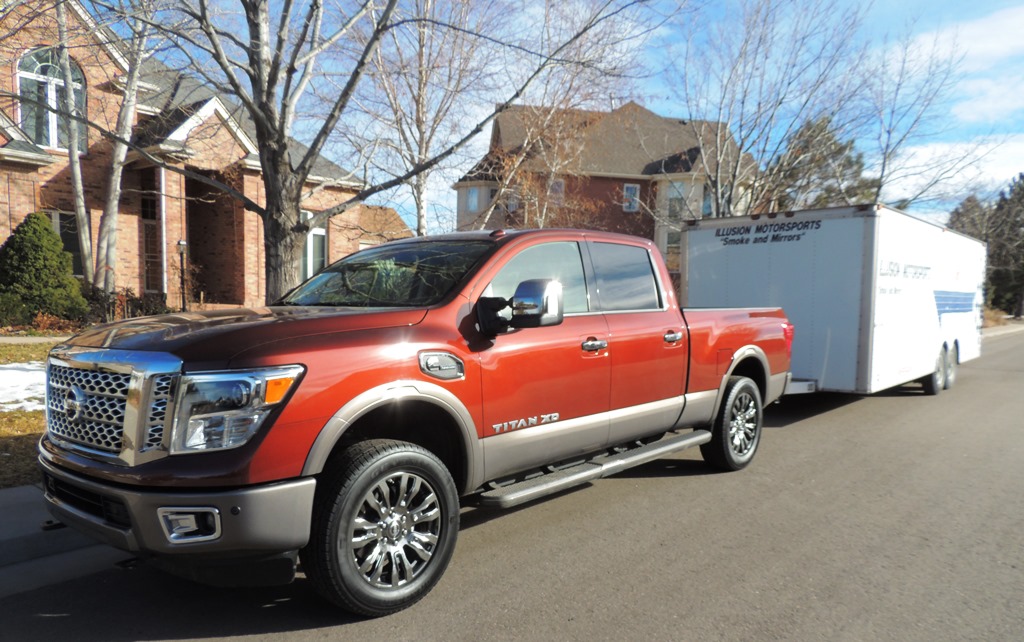 Not enough length meant I couldn’t get a good electrical connection, so 0-60 runs up the highway (without lights or trailer brakes) were out of the question. But that didn’t dissuade me from checking out how the XD would tow around my neighborhood. Perhaps I should have expected it, but pulling away, the XD simply didn’t acknowledge there was much of a load back there at all! On a slight uphill stretch just a few blocks from home, I checked my mirrors, came to a full stop, and let the XD idle as I took my foot off the brake. That 555 ft/lbs of torque soon exerted itself, as the truck inched its way forward. That made me chuckle, as that particular incline would pull my older Titan backwards without the brakes on and the trailer attached. But getting up to speed on several 40-45 MPH roadways didn’t seem too much different from my gas-powered truck. Prospective XD owners shouldn’t expect this twin turbo diesel V8 to be a fire-breathing, patch-laying monster right out of the gate. Quite the contrary, as the cabin was quiet and refined, using insulated hydraulic mounts to cut NVH from the fully boxed, ladder-type frame. 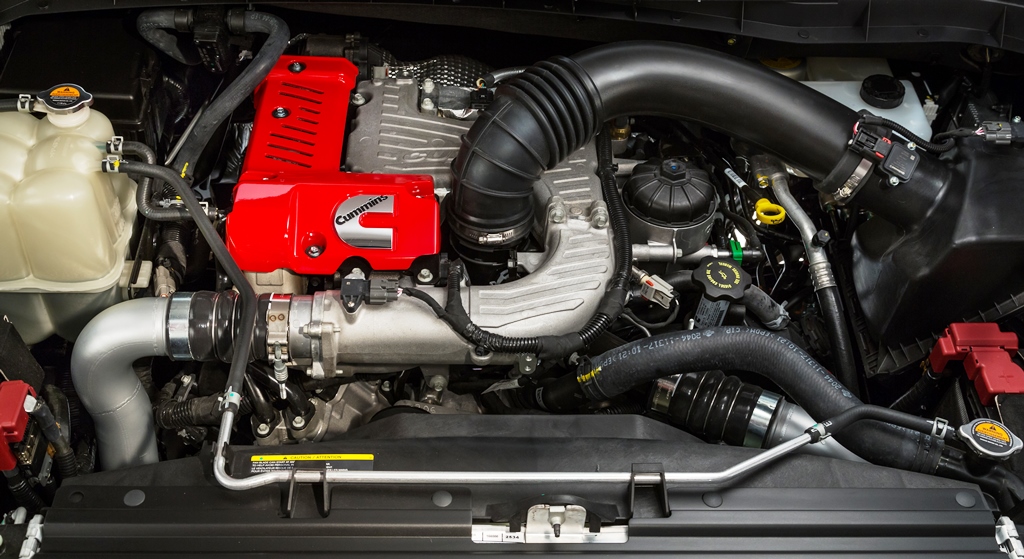 Even without trailer brakes, the XD Titan has plenty of stopping power. The front brakes use massive 14.2″ X 1.5” front rotors and 14.4″ X 1.2” rear rotors (both vented) that feature solid brake feel. Bringing the XD back to the house and unhooking the trailer, there was time to compare it next to my ’08 Titan. The most striking change is clearly from the cab forward, as the first gen Titan has such a radically lower hood line. But the Titan XD has much greater cooling requirements; including a radiator 25% larger to handle this forced induction variant. That in itself makes the front of the XD much bigger and longer than its predecessor. And while much has changed between the two generations of Titan trucks, there remain a few styling similarities, such as the beautifully sculpted rear fender flares, which are more pronounced on the XD. 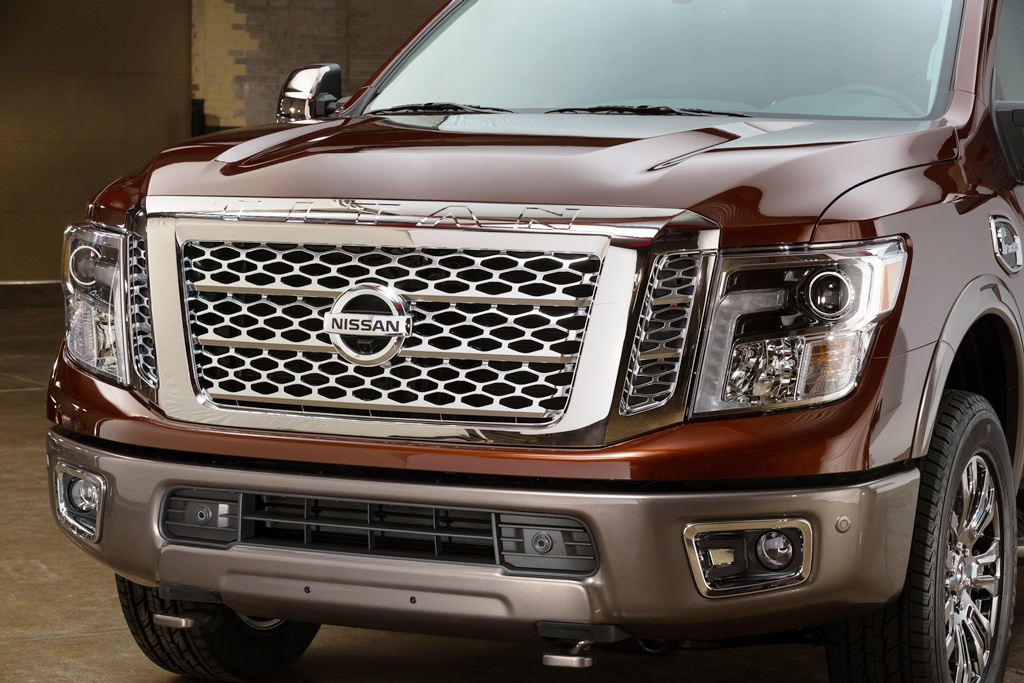 There’s also been plenty of criticism from many Titan loyalists that the XD looks too similar to the new F150, but the closer I looked, the more variations I saw in comparison to the Ford. Massive grilles are common to both vehicles, but the XD uses dark chrome interlinked hexagons, while the F150 uses grey angled slats to make up the grille. From a distance, the headlight modules seem identical, but up close, they diverge in shape. The XD HID bulbs are also placed differently, as are the running and turning lights. Similarly, the angled front windows near the bottom of the A-pillar seem cribbed directly from FoMoCo, but upon closer examination, Nissan chose to use a softer and cleaner angle to create this styling feature. One could argue certain features, like the integrated gooseneck hitch in the bed of the XD, together with LED lighting under the bed rails, were copied from other trucks. It seems as though Nissan studied these modern features and added the best of them to its newest design.

Perhaps the biggest change to discuss is the difference in pricing for the light duty truck market. Since the first gen Titan began rolling off assembly lines in October of 2003 right to the end of A60 production last year, North American appetites for light trucks have shot outtasight. Buyers in this segment include those who want ALL the technology and luxury options for their pickup. That means virtually no ceiling on price as top-of-the-line models from the Big Three have exceeded $70K, with no end in sight. This particular XD, the Platinum Limited, has an MSRP of $63,270 (including a $1,195 destination and handling charge). Of course, with just about every bell-and-whistle Nissan offers, this fully loaded 4X4 crewcab XD contrasts with the starting price of $40,290 for a 4X2 ‘S’ XD model.

Nissan will offer the Titan in three cab/bed configurations, two frame sizes, three engine choices and five grade levels (S, SV, SL, Pro-4X and Platinum Reserve) to cover 85% of this lucrative light truck segment. Will they be successful? I see no reason why not, although the XD looks too pricey for this club racer. When my tow vehicle gets scratched, or the bumper gets bent when the trailer gets turned too sharply, I just shrug it off. Even without all the luxury and technology features, that’s one quality I value highly, even over the rumble of a turbo diesel.