Have you ever heard the expressions, “think outside of the box”, or “step outside your comfort zone”? Well, today I am gonna do just that.

As most everyone knows, NICOclub stands for “Nissan (and) Infiniti Car Owners Club”. We are the largest Nissan/Infiniti forum on the web. We have a wealth of information on just about every model of Datsun, Nissan, and Infiniti ever made. So, just to mix things up a bit, I thought I’d write an article about a Toyota. Before you decide to bring me up on charges of treason, hear me out.

The owner, Jim Newman (a.k.a. flohtingPoint), is a member of NICO and his first vehicle was a 1990 Nissan Hardbody pickup truck. The Hardbody is long gone but Jim has stuck around to give everyone lots of free advice and share his stories of racing in the WDCR SCCA. Who cares that he is doing it in a 1986 Toyota Corolla GT-S, right? 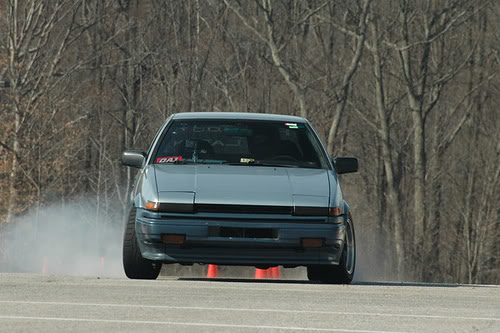 I met Jim this year in Carlisle, PA at NICOfest during the Carlisle Performance and Style exhibition. The day before the event started, Jim worked all day, came home, and swapped out almost everything on his car so it could be driven on the road. Time of completion: 3AM. He made the trek from DC to PA, just so he could enjoy some cheap track time and get to know some of his fellow NICO members. 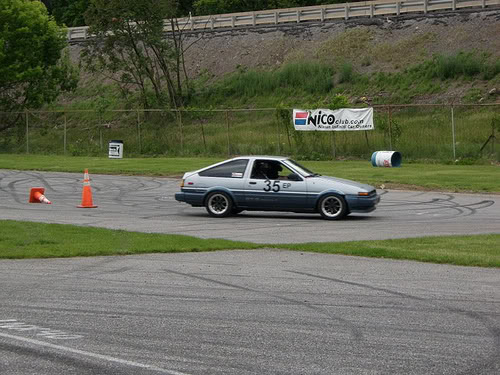 During the two-day event, Jim spent much of his time giving ride alongs and free instruction to the new kids. He told me the day he left that he spent more time instructing than he did driving. However, when he hit the track, he did so with authority. The only car that beat him all weekend was a Z06 Corvette and the driver only beat him by one second.

To read the article about NICOfest at Carlisle, click here.

Jim spends his days traveling as a network engineer but he graciously offered me a few minutes of his time for a Q & A session about himself, his love of racing, and why he chose a Toyota over anything else. Here is his story….

When did your love of cars begin?
At a young age. Like most kids, I had Matchbox cars, liked the sound of loud motors, couldn’t wait till I was 16, etc.

Who influenced you the most to get into racing?
Three time Formula 1 World Champion, Ayrton Senna (RIP).

What was your first car?
A 1990 Nissan Hardbody pickup.

What ever happened to it?
When I joined the military, it was given to my Grandfather. The truck treated me well, I think I changed the oil all of three times and it kept running like a champion. I had a starter and a clutch failure, other than that, it had a clean bill of health and never gave me issues. 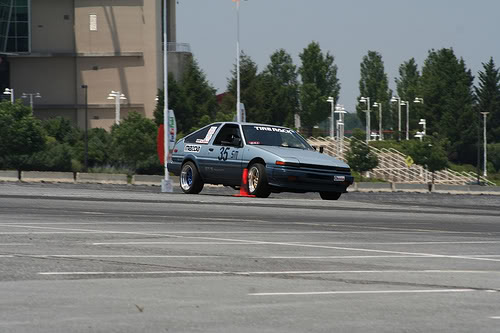 Why did you choose the Toyota?
Simplicity’s sake, honestly. The car comes apart and goes back together rather easily. For years I had S13’s with turbo motors in them (CA18’s/SR20’s) and they’re less than pleasant to work on because I have very big hands. I got tired of having to be a Yoga Master and contort my arms in odd directions just to fix things that broke. I have the tendency to break things more than most people (probably because of my massive track schedule), so I needed something that would provide as little downtime as possible.

Why has it never been replaced?
I’ve thought about it quite a bit. From time to time I have a crisis in faith and think something else might be a more attractive option. Just the other day I was looking for a stock 1989 Civic or a stock mid 80’s Corolla FX-16 for use in the H-Stock class of autocross. Fact of the matter is, you look at successful champions and they either have a ton of cash or stick with the same vehicle and focus only on that one car. I dont have a ton of cash, so I’m trying to take the latter route.