If your sunroof is having trouble working as far as moving front to back, this may help you.Usually, the tilt function works fine.It won’t appear to jam, or be off the track – and with even a small amount of assistance it will work fine. The motor will not sound like it’s stressed as if something were jammed.

There was a Technical Service Bulletin issued on this matter:ITB90-037.

Clutch Slipping in the Sunroof Motor – The clutch preload is not within specification. The motor can be heard; however the sunroof lid will not open or close without assistance. The lid stops at various positions.

The TSB says that a “countermeasure” motor with “improved clutch manufacture” was implemented from 06/20/90 forward (VIN JNKNG01C*LM011735 and newer).

The TSB says that the solution is to replace the motor assuming that there aren’t broken guides causing binding, or the sunroof lid isn’t mis-aligned.

Here’s a picture of the side of the motor facing downward when it’s attached to the car. 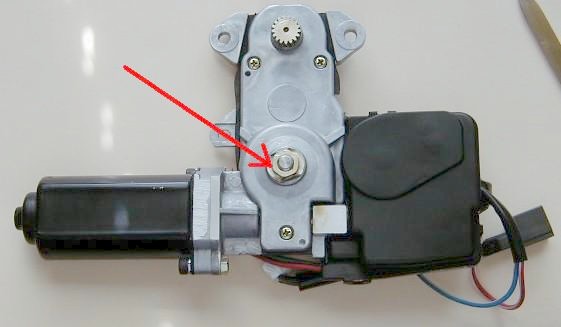 Here’s a picture of the top side of the motor that feeds the sunroof cables. 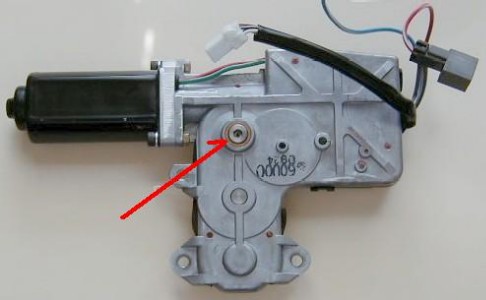 The red arrows are pointing to the adjustment for the clutch. The nut has a washer that is bent up to prevent the nut from turning on the keyed shaft.

To adjust the clutch:

In my case 1/4 turn was enough to fix the problem.

It’s important to be sure that the motor slipping is the cause of your problems. In my case the motor was running fine, but it just wouldn’t move the roof occasionally. With only a slight bit of help, the roof would start moving again and finish its cycle.

Adjusting the torque upward on a roof assembly that’s binding or just needs lubrication could cause damage to the very expensive and difficult-to-replace sunroof cable assembly!

Another tip… make sure that you only remove and reinstall the motor with the roof in the closed position.

If you look in the picture, the limit switches are on the left. Does your motor go right on past the stop point to the “tilt open” position, or it just stops in a slightly wrong position? If it’s just not parking at exactly right spot, you can adjust it using the allen screw that the red arrow is pointing to in the first picture – that can even be done only removing the lighting/switch cluster without pulling the finisher.

If it’s going straight on to the “tilt open” position, it’s possible that the motor was installed at the wrong point in it’s cycle during a prior repair. If so you’ll have to pull the finisher around the visors and remove the motor after getting the roof set to the point that you want it to be when it’s closed. Then you can cycle the motor backward, forward to the first stop, and reinstall. I know all of this is confusing to read, but it’ll make more sense after you have the motor removed and see how it works using the switch to cycle the motor.

In either case, cycling the motor when it’s not mounted back to the closed (but not tilt position) may help.