For decades, the aftermarket hot rod, racing and tuning communities have relied on oiled-media filters to free up that extra few horsepower. In fact, it’s often one of the FIRST modifications many automotive enthusiasts do to their car. K&N filters, to their credit, is generally known to be the top name in oiled filters, and they do a great job of building a quality product. However, it’s always important to evaluate the claims and see exactly what you’re getting for your money. 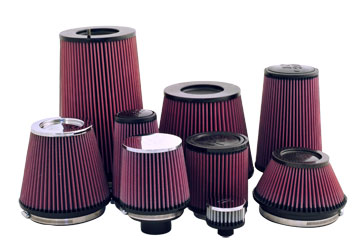 This report shows, with empirical data and sound reasoning, why OEM filters perform better in a variety of areas.

Special thanks to Arlen Spicer and all others involved in making this information available.

A note from the author:
The reason I started this crusade was that I was seeing people spend a lot of money on aftermarket filters based on the word of a salesperson or based on the misleading, incomplete or outright deceiving information printed on boxes and in sales literature. Gentlemen and Ladies, marketing and the lure of profit is VERY POWERFUL! It is amazing how many people believe that better airflow = more power! Unless you have modifications out the wazoo, a more porous filter will just dirty your oil! Some will say,  “I have used aftermarket brand X for XXX # years with no problems.”  The PROBLEM is you spent a chunk of change on a product that not only DID NOT increase your horsepower, but also let in a lot of dirt while doing it! Now how much is a lot? ANY MORE THAN NECESSARY is TOO MUCH!

Others are persuaded by the claims of aftermarket manufacturers that their filters filter dirt “better than any other filter on the market.” Sounds very enticing. To small timers like you and me, spending $1500 to test a filter sounds like a lot. But if you were a filter manufacturer and you believed your filter could filter dirt better than any other media on the market, wouldn’t you want to prove it? Guess what. Test your filter vs. the OE paper. It will cost you $3000 and for that price you will have the data that you can use in your advertisements. Your investment will be returned a thousand fold! EASIER than shooting fish in a barrel! So why don’t these manufacturers do this? Hmmm? Probably not because they would feel guilty about taking more market share.

Now I am not saying that ALL aftermarket filters are useless. A paper filter does not do well if directly wetted or muddy. It may collapse. This is why many off-road filters are foam. It is a compromise between filtering efficiency and protection from a collapsed filter. Now how many of our vehicles collapse their filters from mud and water?

However, if a filter is using “better airflow” as their marketing tool, remember this….Does it flow better? At very high airflow volumes, probably. BUT, our engines CAN’T flow that much air unless super-modified, so what is the point? The stock filter will flow MORE THAN ENOUGH AIR to give you ALL THE HORSEPOWER the engine has to give. And this remains true until the filter is dirty enough to be recognizeable. At that point performance will decline somewhat. Replace the filter and get on with it.

Hopefully the results of this test will do 2 things. Shed some light on the misleading marketing claims of some aftermarket manufacturers and/or give us new insight on products already on the market that are superior to our OE filter.

SCOPE:
This report presents the results of an ISO 5011 test of several air filters designed for the GM Duramax Diesel. The test was independently performed under controlled conditions using a $285,000 machine at Testand Corp of Rhode Island (manufacturer of the machine).

Arlen Spicer, a GM Duramax Diesel owner/enthusiast organized the test. Testand offered to perform the tests at no charge. (These tests typically cost approx $1700.00 per filter). Ken (and employee of Testand), a Diesel enthusiast and owner of a Ford Power Stroke Diesel, shared Arlen’s interest in performing an accurate unbiased test of different types and brands of diesel engine air filters.

The filters used in the test were purchased retail and donated by Arlen and other individual Duramax Diesel owners. The detailed reports from the test have been compiled and are presented in the following pages. The final pages of this report present the behind the test.

ISO 5011 Test:
The ISO 5011 Standard (formerly SAE J726) defines a precise filter test using precision measurements under controlled conditions. Temperature & humidity of the test dust and air used in the test are strictly monitored and controlled. As Arlen learned in attempting his own tests, there are many variables that can adversely affect filter test results. A small temperature change or a small change in humidity can cause the mass of a paper filter to change by several grams.

To obtain an accurate measure of filter efficiency, it’s critical to know the EXACT amount of test dust being fed into the filter during the test. By following the ISO 5011 standard, a filter tested in Germany can be compared directly compared to another filter tested 5 years later in Rhode Island. The ISO 5011 filter test data for each filter is contained in two test reports; Capacity-Efficiency and Flow Restriction.

Capacity and Efficiency:
The Capacity and Efficiency test report presents the test results of feeding an initially clean filter with PTI Course Test Dust (dirt) at a constant rate and airflow. The course test dust has a specific distribution of particle sizes ranging from less than 2.5 microns to greater than 80 microns (see table below).

At this point the test is terminated and the amount of dust passed through the filter (Accumulative Gain) is measured. Dirt passing through the filter is captured in the Test Station’s Post Filter. The exact amount of dirt passed is determined by measuring the before and after weight of the Post Filter.
Similarly, the amount of dirt retained by the Filter under test – Accumulative Capacity – is measured by taking the difference between the before and after weights of the Filter. From these results the overall % Efficiency of the filter is calculated. This test also indicates how long a Filter will last before replacement is required (or cleaning for reusable filters).

Flow Restriction:
This report presents flow restriction of a clean filter resulting from an increasing airflow. The differential pressure restriction across the filter is reported in inches of water (IN H2O) versus Air Flow in cubic feet per minute CFM.

Data from these reports has been compiled and presented in the following bar graphs, plots and data tables.

Filtering Efficiency:
Filtering efficiency is a measure of the filter’s overall ability to capture dirt. 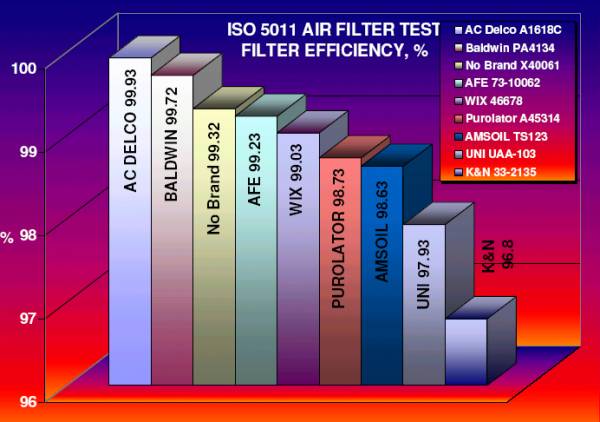 “Accumulative Capacity” is a measure of dirt holding/loading capacity before reaching the maximum restriction limit. 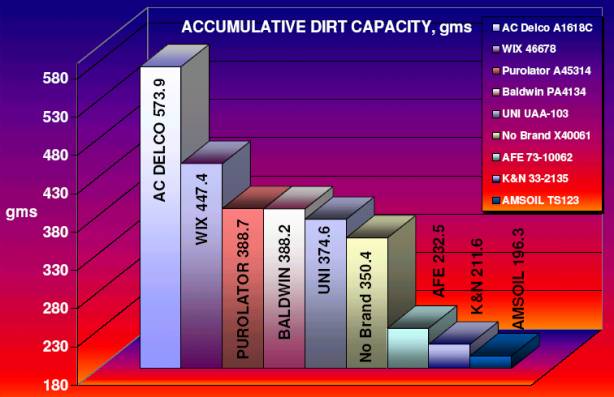 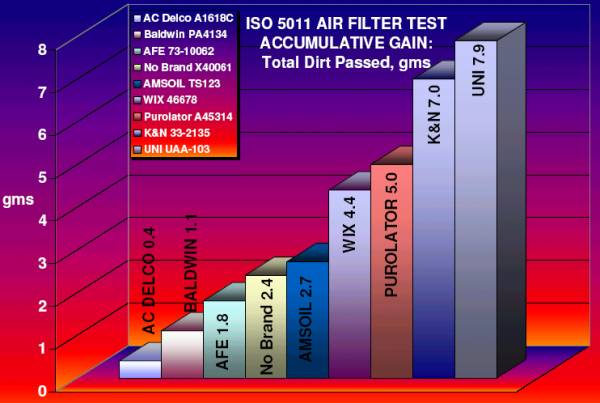 (Note: The Purolator was reported to have a seal malfunction during the test and passed more dirt than it would have with a good seal.) 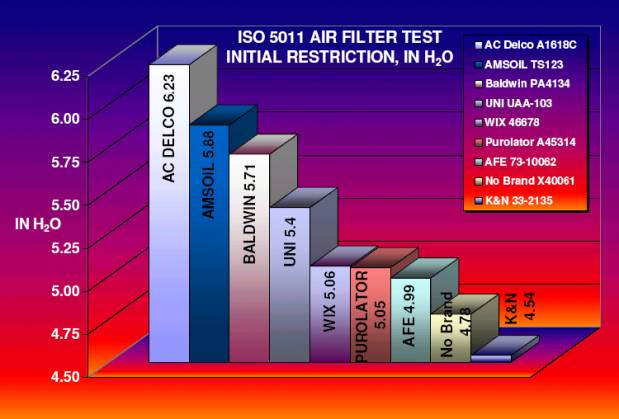 This graph shows each the duration of each filter’s test versus dirt passed (Accumulative Gain). 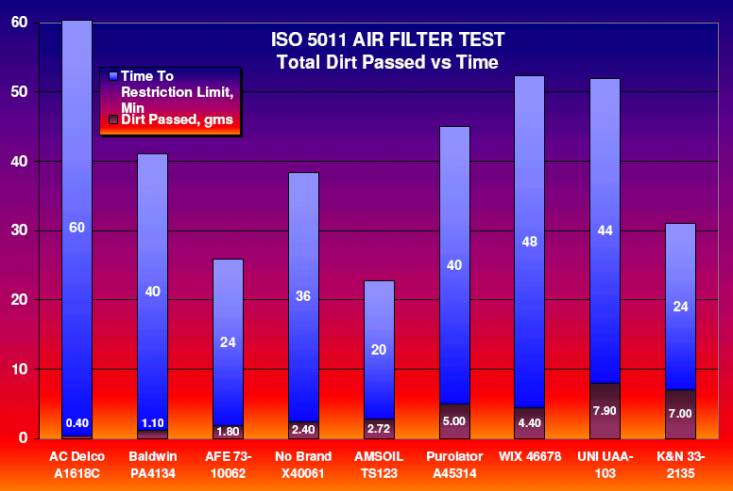 (Note: The Purolator was reported to have a seal malfunction during the test and passed more dirt than it would have with a good seal.)

In the chart above it’s important to note the different test durations for each filter. The AC Delco filter test ran for 60 minutes before exceeding the restriction limit while the AMSOIL and K&N tests each ran for 20 and 24 minutes respectively before reaching max restriction.

Compared to the AC, the K&N “plugged up” nearly 3 times faster, passed 18 times more dirt and captured 37% less dirt. See the data tables for a complete summary of these comparisons. 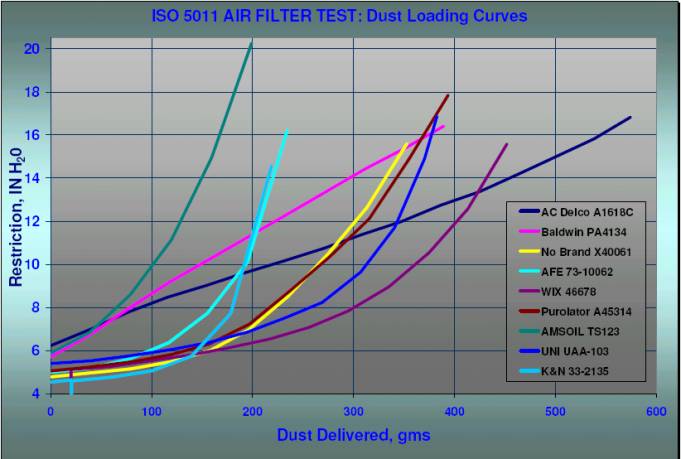 It’s interesting to note the shape of these Dust Loading Curves. The AC and Baldwin filters each had near linear responses until reaching maximum restriction. Restriction for these filters increased at a constant rate versus the 9.8 gms/min dust feed rate.

The other filters, most notably the oiled reusable types, had an exponential loading response before reaching maximum restriction. These filters had a lower initial restriction, but they became exponentially more restrictive under a constant flow of dirt.

This runs counter to the “myth” that oiled media filters actually “work better” as they get dirtier.

Also notice the length of the curves as it shows the relative test time for each filter (time to max restriction). 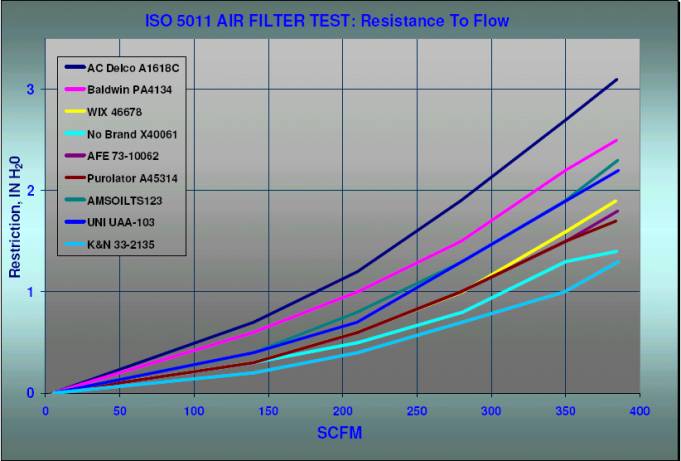 This illustrates the apparent trade-offs between optimizing a filter for dirt capturing ability and maximum airflow.

We hope you’ve enjoyed this article – There’s a lot more Nissan technical articles and useful “how-to” automotive tutorials here – Plus, the friendliest community of car enthusiasts on the web!

Stick around and check out what we have to offer, and if you found this article helpful, share it on Facebook!