Traditionally “performance luxury sedan” has been a bit of an industry oxymoron, at least at a moderate price point. Sure, there is the M5, the E55 AMG, and Audi’s S6, but with the cheapest of these starting in the $80,000 range, and all plagued with unfortunately typical German maintainence costs these are all above what can be considered a reasonable performance luxury sedan option for the everyday driver. 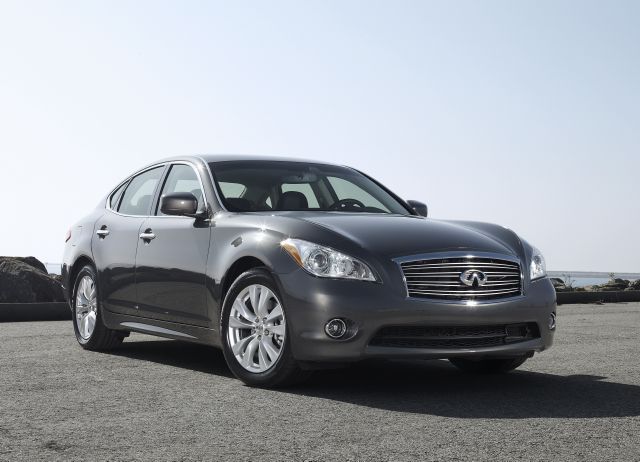 Infiniti invited us out to spend some time with the cars in San Diego this weekend. Representatives from Infiniti Corporate were on hand to discuss the new models, and answer any questions. Infiniti gave us the opportunity to drive the new 2011 Infiniti M37 and M56 sedans quite extensively, and all I can say is, “Wow”. A little background first, if you will….

Infiniti launched the M series when Nissan first brought the brand to the United States in 1990 as a 2 door coupe and convertible based on the Nissan Leopard platform from Japan. Underpowered and with lackadaisical performance it was a poor seller and the line was dropped for the 1993 model year.

Infiniti re-introduced the M series in 2003 as a mid-range sedan. Equipped with the VK45DE from the flagship Q45, it was based on an already outdated design from Nissan’s Cefiro in Japan and was again met wtih less than encouraging sales in the United States. The Y33 model M45 was only manufactured for roughly 18 months as a 2003 and 2004 model.

For the 2006 model year Infiniti introduced a re-designed M series based heavily on its popular G series styling. It was equipped with either the VQ35DE (from the G35) or the VK45DE (from the Q45) as the M35 or M45, respectivly. The car enjoyed more mainstream popularity than than the previous M models but still seemingly failed to carve out its own niche in the Infiniti lineup.

All this has changed with the new 2011 M series.

The 2011 M series is the first production Infiniti model based on the highly acclaimed Infiniti Essence prototype. It boasts a fresh new design that is both eye catching and simply sophisticated.

Available with the new VQ37VHR (330hp) or VK56VD (420hp) engines coupled with a fantastic 7 speed automatic transmission these cars are truly a drivers car. Immediately when entering the car I was struck with the quality and craftsmanship. I went around opening all the doors, examining the fit and finish of the seats, door panels, weatherstripping, and headliner. I found nothing to nitpick throughout this inspection. The seats are excellently formed and extremely comfortable. While not offering the bolstering of a sports car I still found them to be more supporting than most luxury cars. I found all the controls to be logically situated and easy to use. I hate feeling like I need to pull out the owners manual to figure out the operation of simple cabin controls but that was happily not the case in the M. Everything was where I would expect it to be and easily within reach.

Upon pressing the ignition the engine hummed to life. I would love to say roared, but admittedly these cars have too little exhast note for my taste! The potential is there but the beast needs to be unleashed! At this point I must begin to describe the two cars separately.

Infiniti M37:
I was able to drive two versions of the M37, one RWD with the premium package and one M37x (AWD) Deluxe Touring package. As I started down the road I was immediately struck with the feeling of balance present in this car. The 7AT does an excellent job of keeping the engine in an optimal power range during part throttle acceleration making the car feel very nimble and much quicker than you would initially imagine. The braking capabilities of the car were equally impressive with smooth but very confident engagement.

As I began to encounter more twists and turns, I was struck with the realization that this felt like a much smaller car, definitely not like the numbing suspension and irrelevent steering of a typical luxury sedan. The M felt very well planted and turn-in was excellent. Many of the electronic safeguards that come standard on the M can be disabled or turned off if desired. I found this quite nice on windy roads as being reminded I was near the lines became slightly annoying over time.

In conclusion the M37 in any of its configurations is an excellent interpretation of a luxury sedan with very real performance implications.

Infiniti M56:
Infiniti has created a BEAST. It’s the word that sprung to my mind immediately as I pulled onto the road with the new M56s. 420hp does not often go unnoticed but in this car, it never will. I was constantly fighting (and occasionally losing…) the inclination to pop the shifter into manual and with a flick of the paddle drop a couple gears and mash the accelerator. The power of the VK56VD in this chassis is truly impressive. Acceleration is fantastic. Cornering is balanced with plenty of throttle induced over-steer on demand and the braking is superb.

Can either of these new Infinitis steal away some customers from BMW, Mercedes and Audi? The question that should be asked is, “How are they going to retain their following when the reports come out that the new M outperforms them and costs less?”

If you are in the market for an upscale sedan in this segment, you’d do yourself a serious disservice by limiting yourself to the European offerings and passing over the M-series.

With style, comfort, and performance aplenty in the two new M-series twins from Infiniti, the bar has been raised.