My philosophy with any automotive accent lighting is that the lights themselves shouldn’t be seen…only their soft glow. As such, I try to make sure that I mount my LEDs in places where they will reflect off many surfaces and give the nicest ambient light.

1. Bring both the driver and passenger seats as far forward as possible.

2. At the bottom corners of the console you’ll see a screw on either side…take them out.

3. Grab the very rear of the console and pull to remove.

4. Put the seats back again. Pull off the panel in the footwells (they’re just snapped in there) and remove the screws holding the front of the console in place.

5. Remove the panel above the storage box/cubby. Open the lid just far enough that you can stick your fingers underneath it and pull out the little panel up there.

6. Next, pull up the bezel surrounding the shift boot. The easiest way to do this is by putting your fingers underneath it and pulling up in the front. Also, unsnap the clasp at the top of the shift boot and remove the shift knob.

7. Remove the center console/cubby by grabbing the bottom and pulling straight out. Remember to unclip the 12V accessory connection in the back!

8. Stick a very thin flathead screwdriver in the corner of the air vent panel. You have to stick it in fairly far (about 2/3 to 1 inch) before you’ve got enough leverage to yank it out.

WARNING!!!
There are two connections to be undone in there…one of them is for your passenger airbag light.If you unclip it when the battery is still hooked up, you will get the airbag warning light in your gauge cluster the next time you start your car.Instructions on how to reset the warning light can be found here: Airbag Reset Procedure

9. You’re done! Note: The center console should now pull up nice ‘n easy. Be careful though as there are a couple of electronic clips under there (for the heated seats and something to do with the supplemental airbags). Make sure you unhook them before pulling too hard!

1. If you’re using Oznium superflux LEDs, I’d suggest using two per vent. Drill two 3/8″ holes across from each other in the bottom of the vents. Make sure they’re far enough back that when the LED is mounted in there it doesn’t obstruct the movement of the louvers.

2. Drill one or two 3/8″ holes at the top edge of the cubby. Make sure they’re at about a 45-degree angle so you get maximum light coverage. 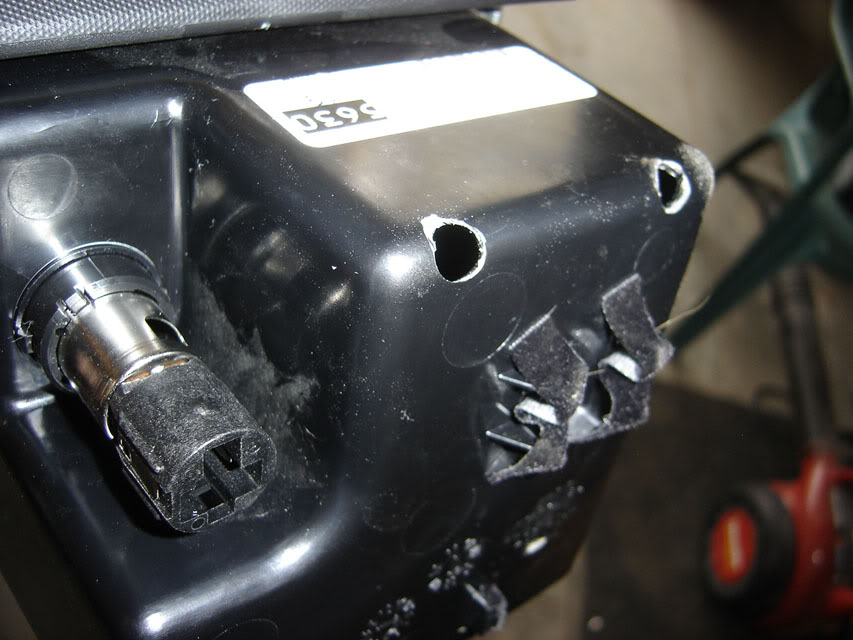 3. If you want to put LEDs in the rear cupholders, make sure you have enough wire! Simply pull up on the cupholder to get it out.

4. Using a coat hanger(or suitable device), run your wires down the panel and out the bottom. From there you can tuck them neatly underneath the door sill.

5. When placing your LEDs in the center cup holders, I would suggest placing them underneath the lip so only the glow is seen. In this case, I use four superfluxes in total (two on either side).

6. Here’s a simple diagram on how to wire up your switch.