In addition to a clutch fan, cars equipped with air conditioning also got a small electric fan between the clutch fan and the radiator. This is because the AC condenser needs air passing through it to keep cool, otherwise your AC won’t blow cold. So obviously if the engine is too cold for the clutch fan to engage, the AC wouldn’t work properly. Now, this little fan isn’t meaty enough to cool the engine as well, but it’s got wiring and that’s what is important.

The way this fan works is simple. The relay has constant power to it through a 30 amp fusible link. The relay coil (or turn-on signal) only gets power with the key on. That means when you turn the car off, the fan turns off.

– electrical tape- your choice of soldering iron and solder or a splice connector and some butt connectors- crimping tool (or good pliers?)

Note: There are two different kinds of thermostatic switches; the kind that pushes into your radiator fins and the kind that taps into the coolant. I prefer the latter, so that’s what I got. All I did was ask for one for an old caddy or something, and made sure it’s on temperature was in the 170 range. Then I went and got some fittings to screw it into, and put ends on it so I could splice it into a coolant hose. Then I did a throttlebody bypass (why not?) and tapped it into that coolant line. The fittings I used look kind of weird, but whatever. Just make sure that the whole thing is made of metal that conducts electricity and make sure it’s grounded. Example: 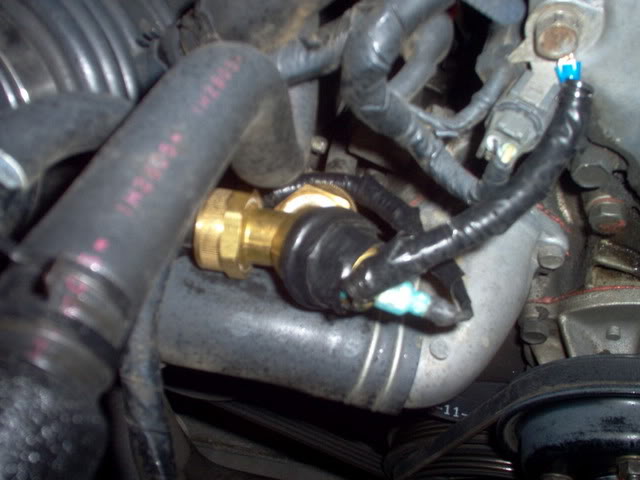 The wire coming out the top of it that goes to the bolt on the engine is the ground. You have to have this or else it won’t work.

Ok, this will help you take advantage of as much of this stock setup as humanly possible. Here’s a simplified diagram showing how the ac fan wiring works and how you wire in a manual switch to turn it on, as well as a thermostatic switch to make it come on automatically when the engine gets to the desired temperature: 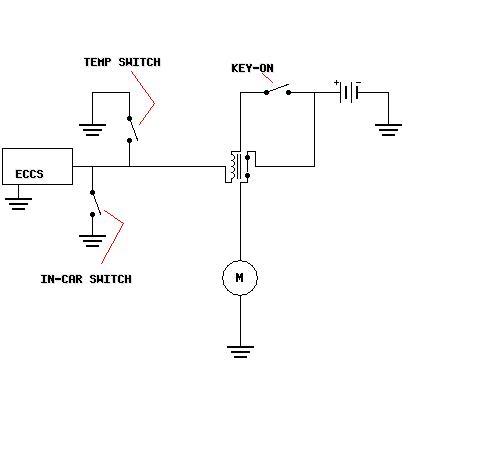 Pull the cover to the passenger side fuse box and locate the ac fan relay. Should be in the driver side front position. Now lift off the middle part of the fuse box so that you can get to the wiring underneath it. look for the wire coming out the bottom of the relay that is orange with a blue stripe. That’s the one that goes to the ecu. If you ground it, you can watch your fan come on (if it’s still connected, of course). Splice into the wire any way you like. Run a new wire from there to wherever you mount your temperature probe. Now one end of the probe is gonna be grounded (the body of it) and the other end (the blade connector on the top) is gonna be the one you want to connect to. Take your wire and connect it to the blade connector and tape it up good.

Now for the optional switch. Either use a 3 way butt connector, solder, or use another splice connector to get another length of wire coming off the one you just connected. Run it into the car and to your switch. Then run it from the other pole of the switch to ground.

Now all that’s left to do is cut the plug off the pigtail for the stock ac fan and connect the wires to the plug for your electric fan.

Aaand.. you’re done! Now the fan will turn on when the air conditioning is on, when the coolant is hot enough, when the switch is flicked on, or any combination of the three.

If you have a fan controller but don’t know how to make it work with the AC: