Would it surprise you if I say the leading cause of dead ECM’s (or ECU for you older folks) on Altimas from ’02 to ’18 is… the serpentine belt?

It’s true. Not just for QR engines either. The VQ’s have a similar problem for an identical reason. First, understand that when a serpentine belt dies, it rarely just snaps like an old-school vee belt. Instead, serpentines have a tendency to shred, peeling apart in long strips that “whip” everything around them before they detach or disintegrate. Now look at this pic: 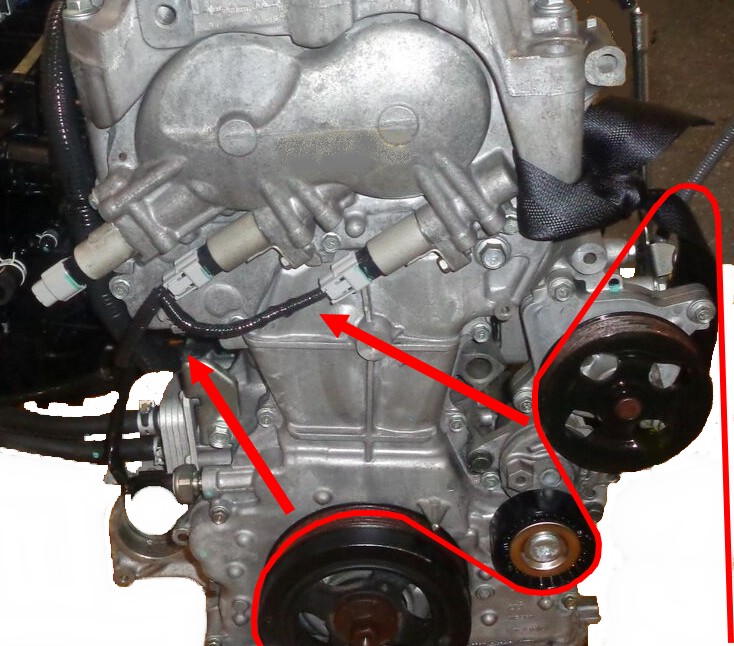 This is a ’13 Altima QR, and the red line traces the approximate route of the belt (it’s missing the alternator). The arrows show the approximate directions a strip whipping loose from the pulleys will take. Notice any wires in the way? Oh, yeah, the IVT solenoids. In fact, side-to-side, those wires are lined up almost precisely with the belt. It’s the same on VQ’s, the only difference is that the back bank on VQ’s has a metal shelf that offers some protection to the rear IVT. It doesn’t always help, and the front solenoid on a VQ is just as exposed as a QR. Older QR’s with belt-driven power steering pumps are even more prone to this type of damage, because the P/S pump is over to the left in the pic and the belt travels directly below the leftmost IVT (the only IVT on many old ones).

Regardless of the particulars, it only takes a few good whacks from a renegade rubber strip moving at near-supersonic speed to open the loom and destroy the wires. Most of the time they’re literally ripped loose from the connectors. Now, here’s the other half of the problem. Look at this diagram: 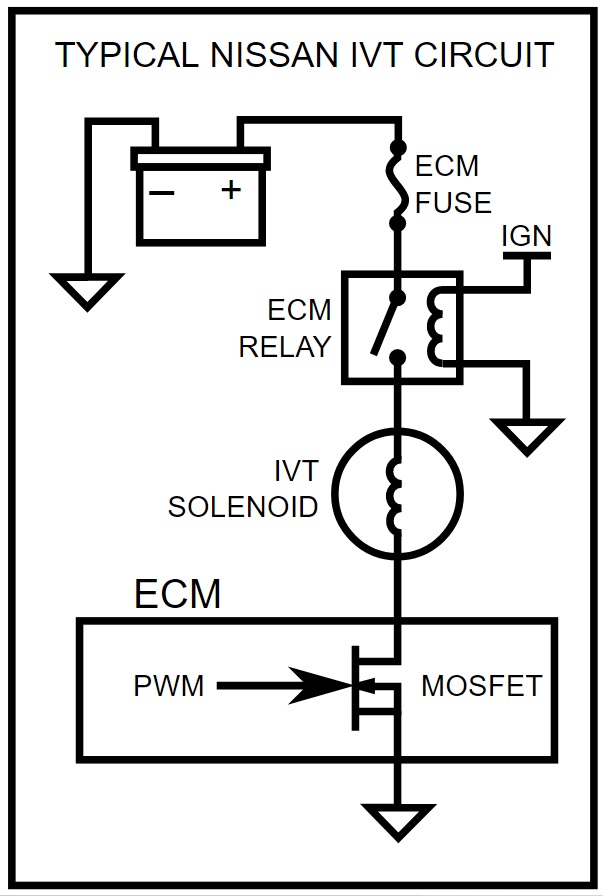 Every Nissan IVT since 2002 is set up that way, and maybe every Nissan IVT ever. Keep in mind that the upper and lower IVT wires in the diagram are running next to one another into the solenoid’s 2-pin connector. So what happens if they short together? Oh. That poor little MOSFET transistor inside the ECM is trying to carry all the current the battery can deliver and sink it to ground. Hmm, 550 amps?

Won’t the fuse save it, I hear you ask? No, it won’t. Automotive fuses need to generate a few milliseconds of heat in order to blow, like any thermal fuse. Milliseconds are eternity to that poor FET, which is smoking in microseconds. Many times the fuse won’t blow at all, because the MOSFET fails open-circuit and there’s no longer a short. If the FET melts instead, then the short circuit becomes permanent and the fuse blows every time the ignition is applied. Either way, the ECM is toast. ECM’s these days aren’t constructed like they were in the ’80’s or ’90’s, with discrete components that could be individually replaced. If you cut open a modern one, you’ll find one gigantic silicon wafer with only a handful of support chips, all surface-mounted and never intended to be serviced in any way. So if that belt whips the two wires together for even the briefest of instants, the IVT output will never work again. Even if the mother chip survives, it will be walking-dead, unable to control all of the hardware it needs to control.

For less than $100 in parts, it’s simple peace of mind – and a replacing that serpentine belt is a good precaution against a really expensive repair caused by questionable design.

So maybe you own a Maxima and you’re cocky about that cracked belt, because the VQ has a chain-driven water pump and even if the belt fails, it should still get you to a shop. Don’t be cocky. A dead ECM won’t be getting you there, and overheating the engine won’t be your biggest concern.