As car enthusiasts, restorers and collectors, we’re fortunate to be a little more knowledgeable about parts, accessories and maintenance than the average driver. You know the routine – We get asked for our opinion of certain cars, and we get asked for suggestions on products all the time. It’s nice to be able to steer our family and friends in the right direction, and if you’re like me, you’re always looking to increase your knowledge and understanding of what’s out there.

There’s a million articles and products out there for making your paint glossier, shinier, and more resistant to dirt and scratches, but what about the glass? Admittedly, one of the areas I knew very little about was auto glass. I mean, I can fix a busted power window mechanism, and I can install a windshield in a 70’s Datsun… but protecting and improving the actual quality of the glass was foreign to me. So, we’re going to talk about that today.

Remember the vinyl and plastic dressings of 30 years ago, like Armor All? Most modern builders and collectors wouldn’t touch it. Better products exist, and so it’s relegated to the auto parts section of Wal Mart for those “average” car owners. Well, the same is true for windshield and glass treatments. We used to think Rain-X (introduced in 1972) was the greatest product known to man, and they sold millions of gallons of it. But like any antiquated product, it’s not without its flaws. Rain X’s main ingredient is silicone (a colorless oil) in an acetone and water carrier. Because it is an oil, it’s a pain to apply, leaves a greasy feel, creates foggy halos or refractive flares in the glass that can hamper visibility, and it doesn’t last long. Fifty years have passed since then. Modern technology had to improve before we got something better. 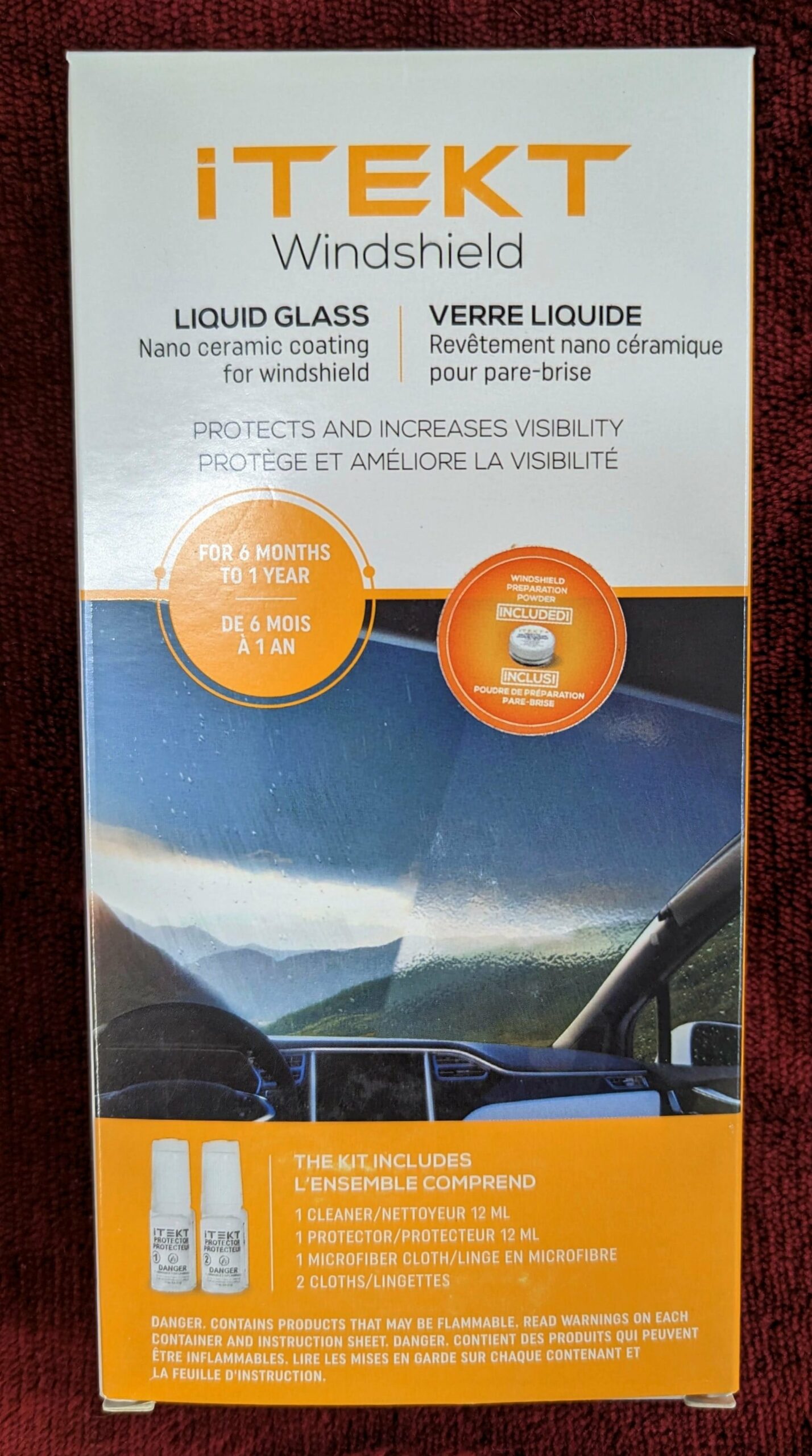 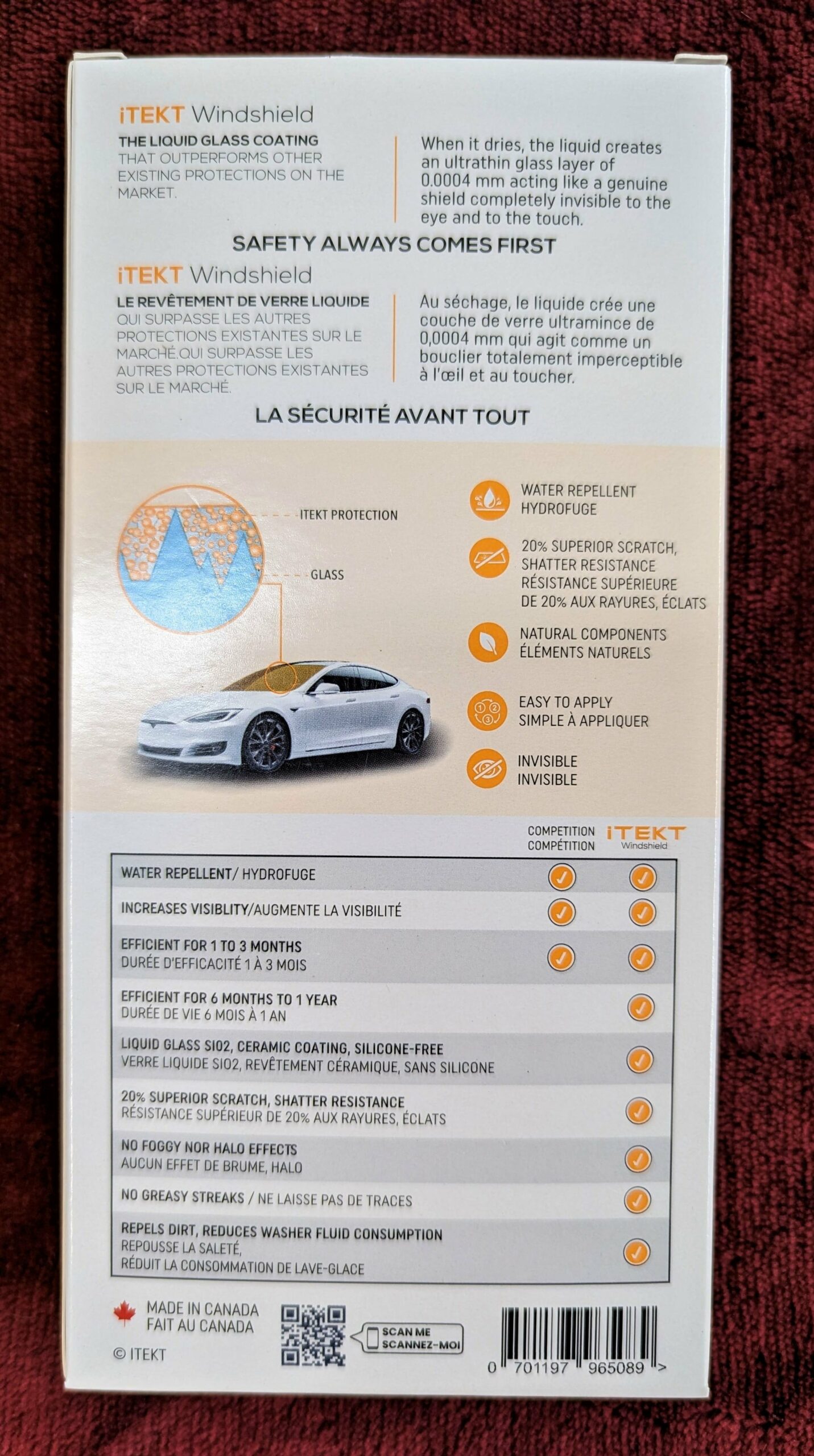 ITEKT Liquid Glass is that product. ITEKT is a protective glass coating that outperforms anything else on the market. Here’s how it works: When applied to glass (such as a windshield), it creates an ultra-thin glass layer that is optically clear, invisible to the eye, and smoother to the touch. It’s a very similar technology to what you’d see on a high-end cell phone screen. The secret is silica (SiO2), a chemical compound that is composed of one silicon atom and two oxygen atoms (which is what glass is made of). SiO2 molecules bond with the glass to not only fill the microscopic pores and voids in the glass, but also form a quartz glass barrier between the environment and the surface. Once applied properly, glass coated with ITEKT is able to reject and repel contaminants like water, bugs, slush, dust, and build up of hard water minerals. 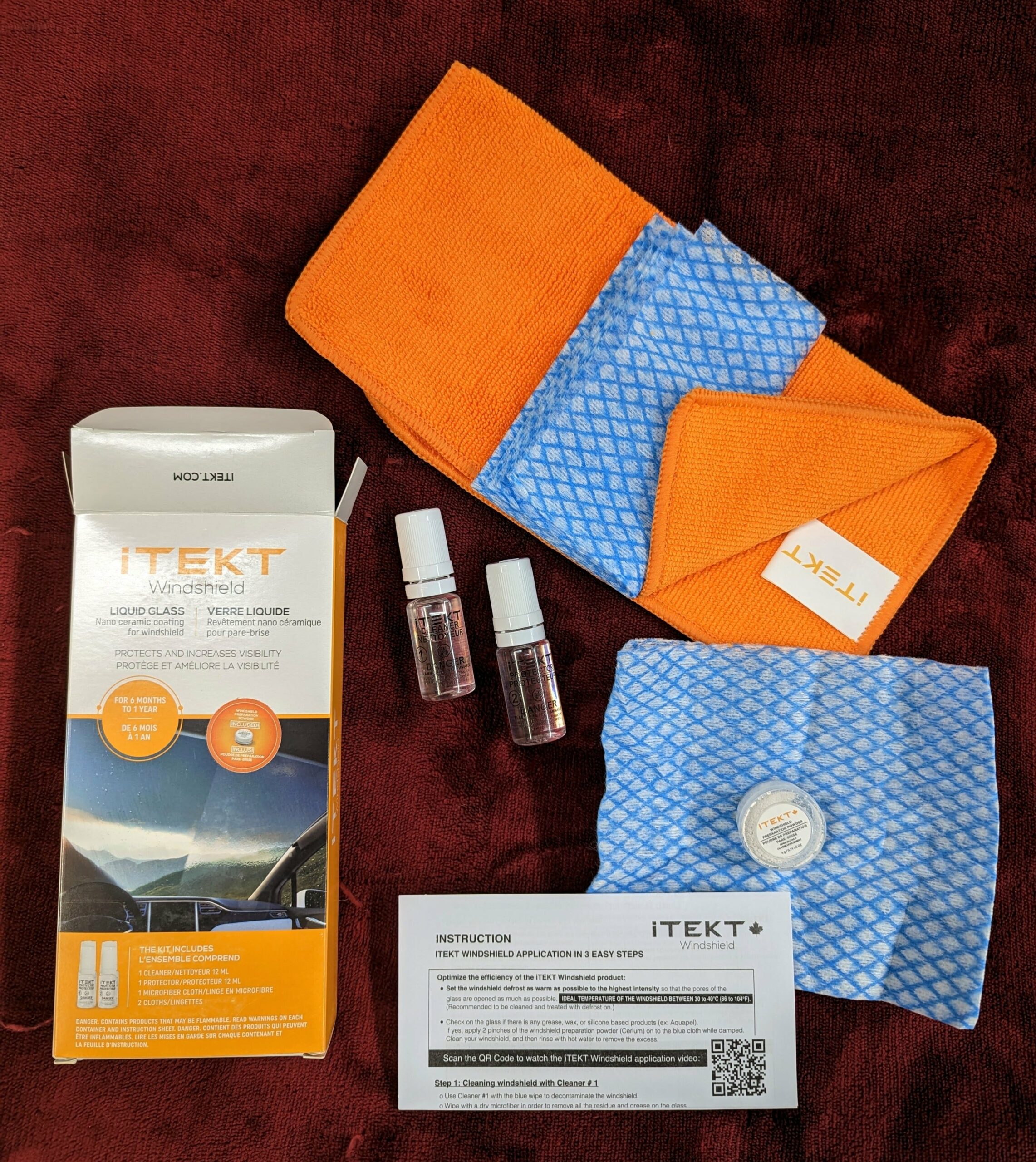 After chatting with the developers and marketing team from ITEKT, I wanted to do some “real world” testing to show how it performs… no professional editing, no slick gimmicks, no lab coats. Just a regular guy in a grage who builds and restores cars, testing the limits of a product. So, let’s check those out.

I’m using a quarter window glass from a 1972 Datsun 240Z. Someday, these are going to be super-rare, and I’m going to be Public Enemy #1 for ruining one. But for now, it’s an old piece of tempered glass and we’re gonna abuse it. 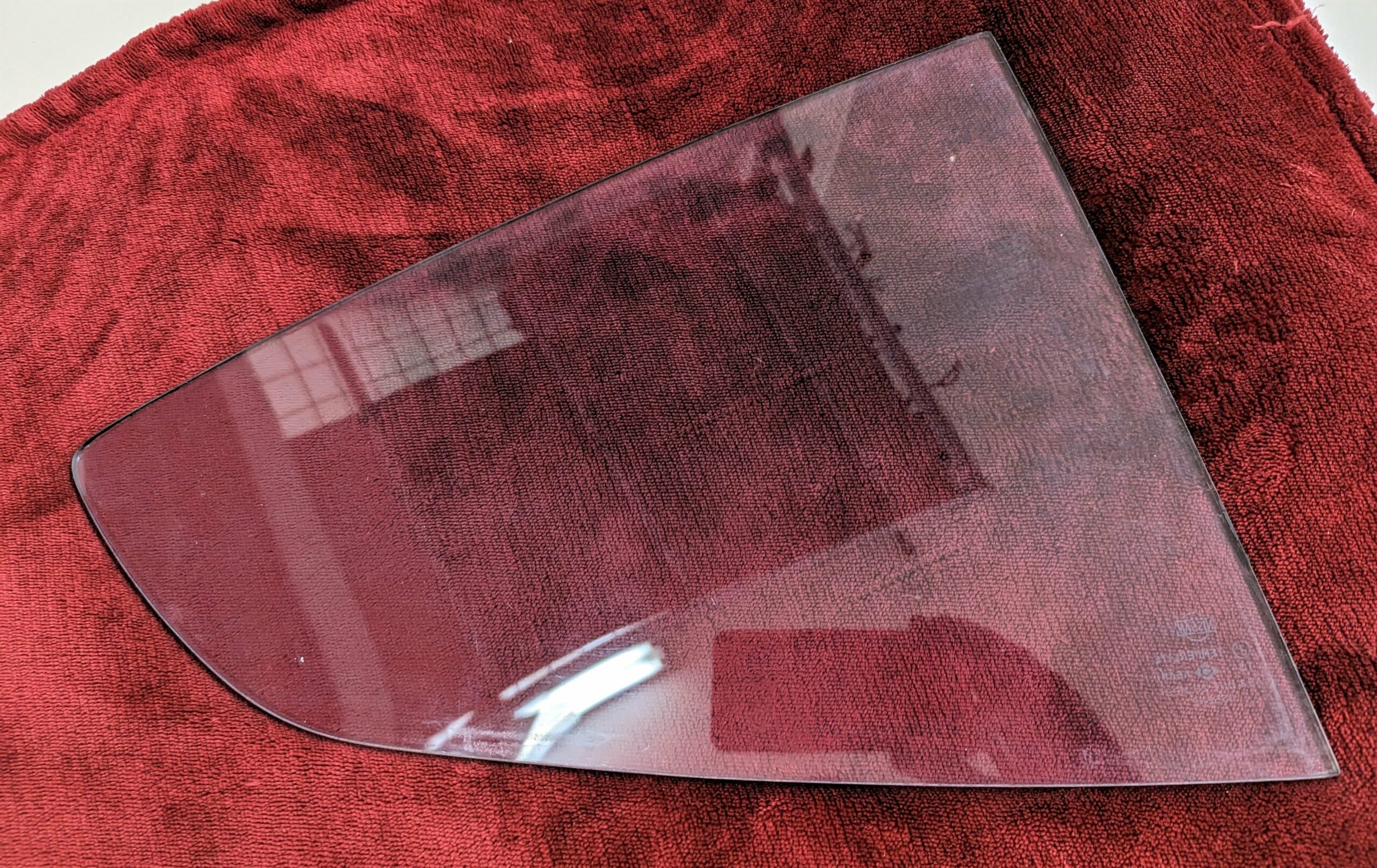 First order of business was to clean the glass thoroughly using the supplied cleaning components. Then I masked off one half and labeled the back side of the glass “treated” and “untreated.” My shop temp stays around 70F, but it’s best to apply ITEKT to a warmer surface, so I used a heat lamp and brought the glass to 100F using an infrared thermometer and applied the solution according to the directions. You can also apply the product in the sunlight, and in colder weather, use the defroster set to max heat to bring the glass temperature up. 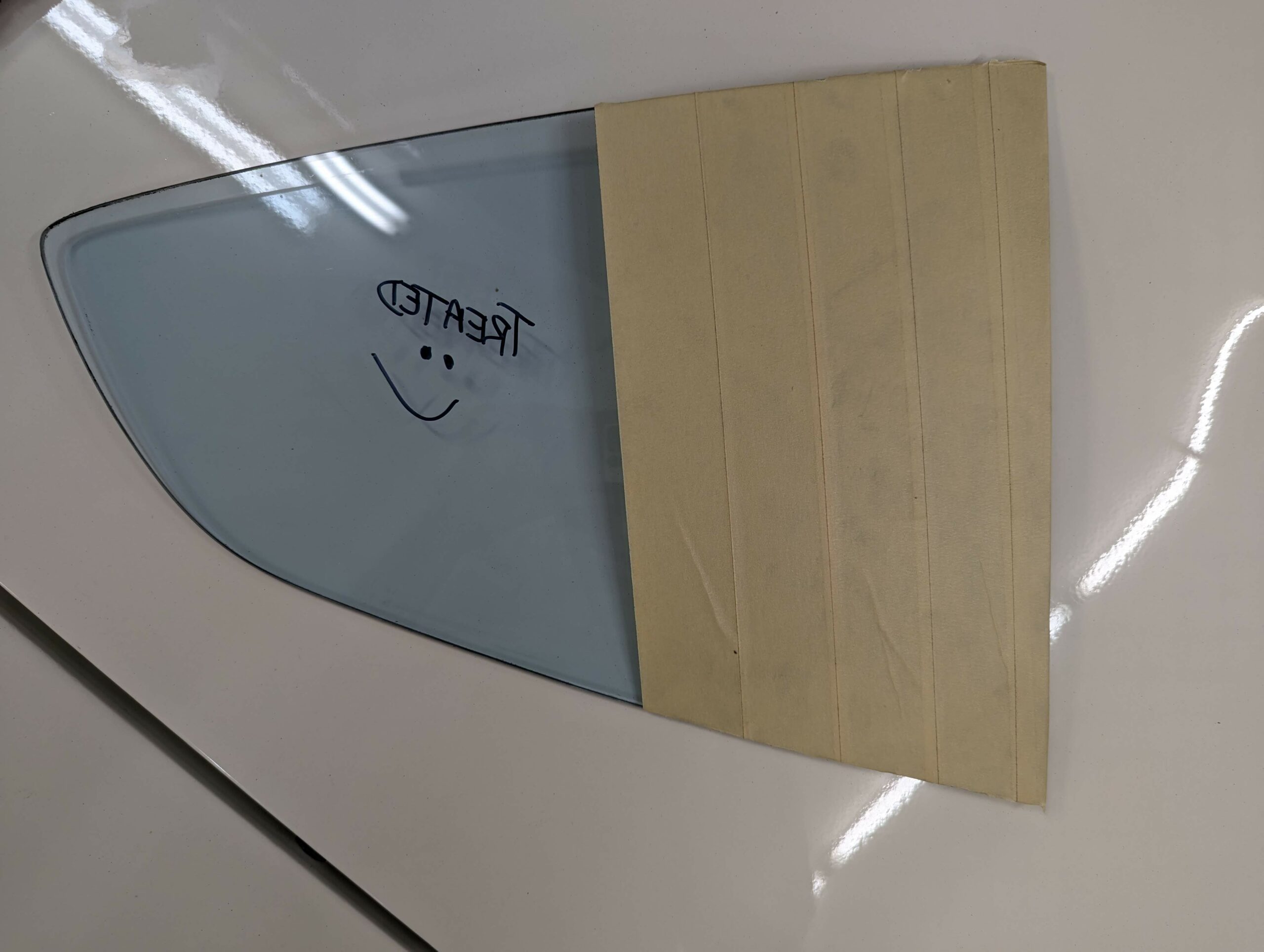 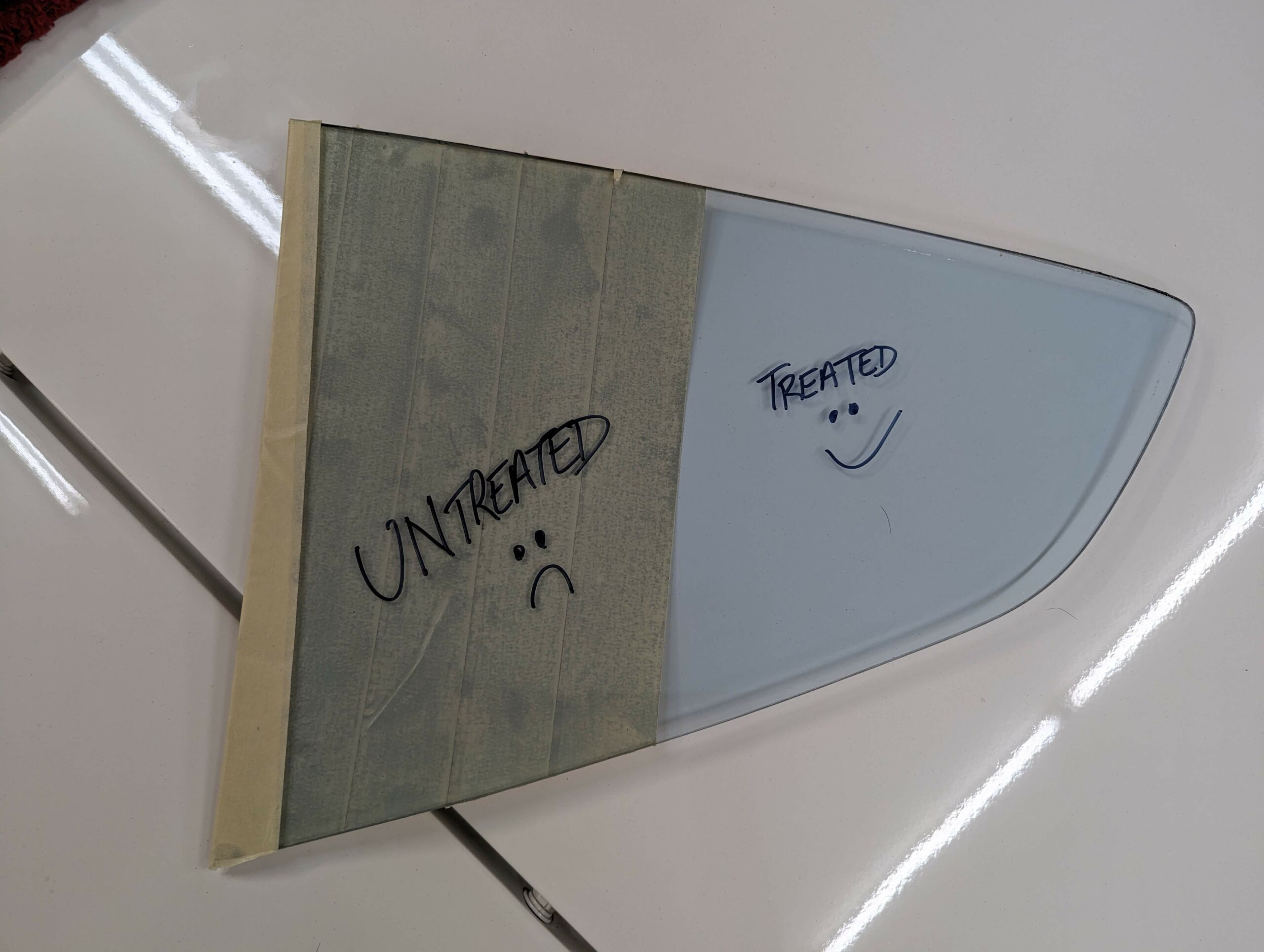 First impression right off the bat was that it’s super-easy to apply, and I found that looking at the glass at an angle, I could easily see where I’d covered and which spots I’d missed. It’s best to apply in alternating directions, so I did three passes north-to south and three passes east-to-west. Then, buffing the glass is easy as well. If you’ve done it right, you can actually hear a static sound as the microfiber glides over the glass. Also, the glass on the treated side had somewhat sharper reflections and felt slicker, which was promising.

Once the glass was treated, I did a simple soapy-water test. Here, you can see the water on the treated side beads up easily, but spreads out and leaves rivulets on the untreated side.

A gentle breeze of air from my compressor blow gun clears the glass easily on a the treated side. I suspect this is similar to what you’d see using your windshield washers and driving 20-30mph (we’ll do an actual windshield test later).

Next, I whipped up a dirtier solution… some oily nasty mess from the bottom of my compressor drain blended with a handful of dirt from the yard… far worse than the kind of grime that gets kicked up off the freeway in rainy weather. 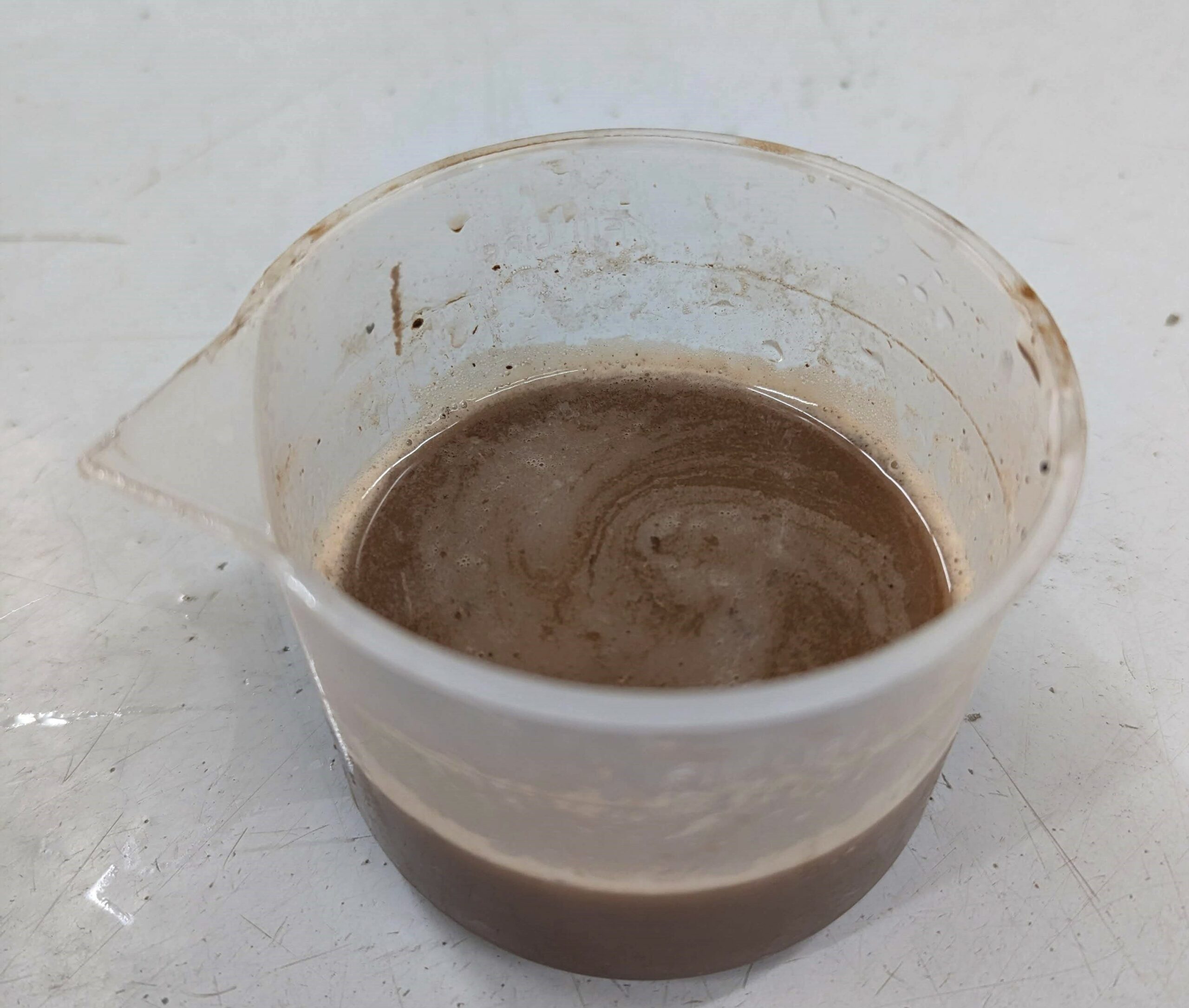 After I cleaned off the mud, I wondered how the glass would respond to a Sharpie permanent marker. One the untreated side, the marker wrote clearly and neatly. On the treated side, the marker didn’t really adhere, and where it did, I could wipe it off with my finger. Somehow, I missed getting a pic of this part, but I thought it was pretty cool…I can imagine if it works for permanent marker, it’d keep paint or other stuff from adhering as well!

For the last part of this abuse test, I wondered how ITEKT would protect glass from actual physical damage. Here in Arizona, if you commute daily, you can count on replacing a windshield every year or two. Sand, gravel, and dust all take a toll on windshields here. If you somehow have a windshield that doesn’t get rock damage for 30k miles, and you look at it at an angle, you’ll see it’s pitted and rough, which impairs visibility and makes the glass harder to clean. The guys from ITEKT explained that their formula creates an ultrathin protective layer of glass, filling imperfections and minimizing the potential for damage from small impacts. I wanted to simulate tiny bits of grit and sand hitting the glass at freeway speeds, so I gave our test glass the ultimate abuse… because, you know, science!

I have two media blasters in my shop for restoration work… One is loaded with heavy grit coal slag (for coarse stripping of iron and steel), and this one is loaded with medical-grade spherical glass bead for aluminum and finer work. 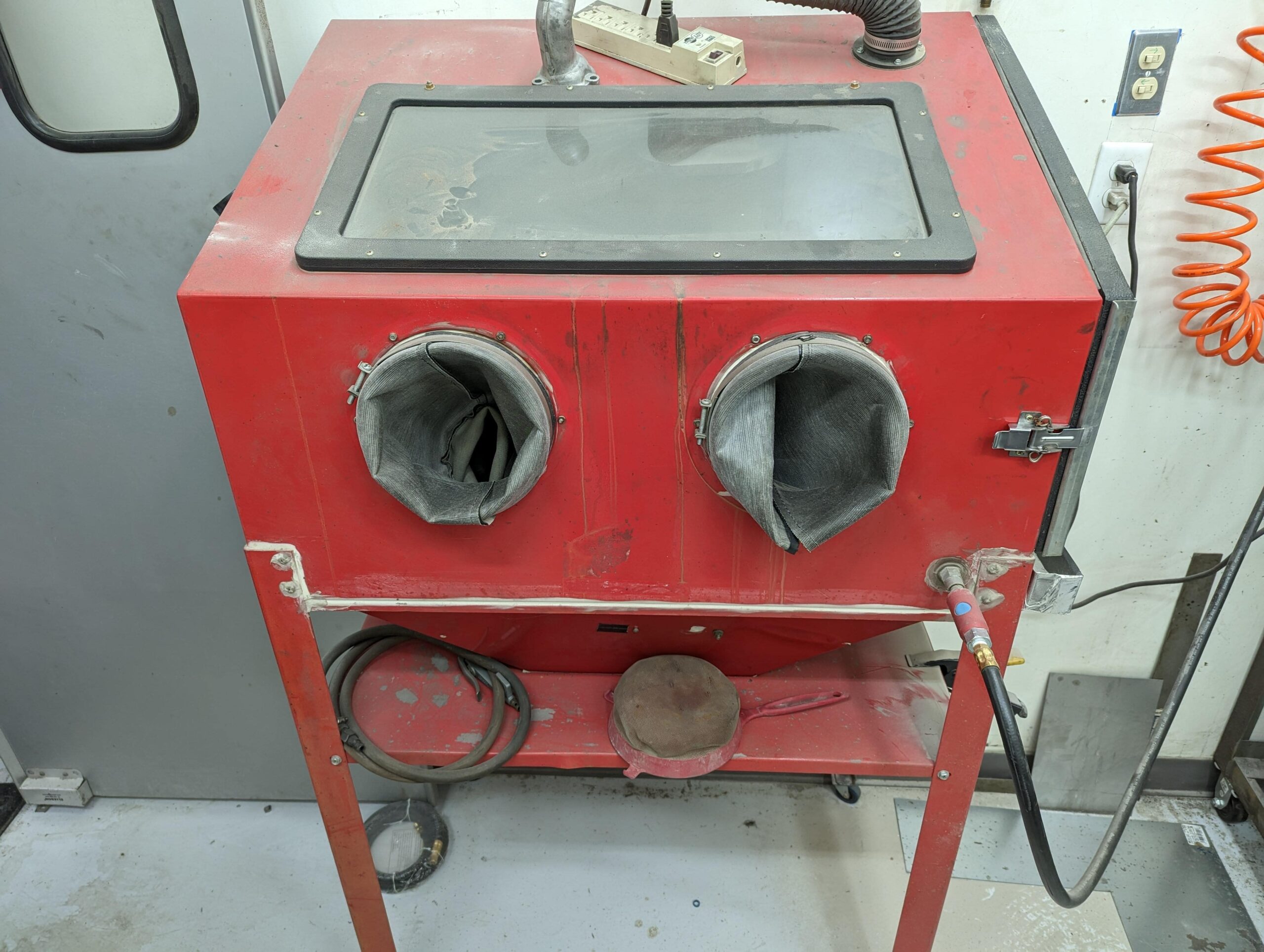 I loaded the test piece in the cabinet and subjected it to a brief spray of equal duration, at 130psi, across the face of the glass, for three passes. You can see that the glass is now ruined, and damage appears on both sides… but the treated side is significantly less damaged. Obviously, this is an extreme example of abuse that no windshield will realistically endure, but it’s nice to know that the coating can actually prevent some damage.

The next test was going to be an application on my daily driver windshield, and as luck would have it, I had an emergency trip out of town, came home sick, and then discovered a huge chip in my windshield. So, while that’s getting replaced, I’ll sign off and we’ll revisit that project next week on a fresh new windshield!

Almost forgot – Here’s where you can buy ITEKT, or wait until our next episode where I apply it myself!