Editor note: After a long hiatus, Jerry Hofschneider returns with the latest installment in the Skidmarks series of articles… Welcome back, sir!

Random puffs of fog appear in patches on the slopes of the impossibly green mountains, drifting out of the trees and getting captured by unseen breezes that blow them into oblivion. They appear, they puff and they drift on the wind only to reappear upslope, giving delightful animation to the static scenery of tree and stone.

A lone road winds its sinuous path up, down and through the green wilderness, a road carved, in places, through living rock, a road that goes through the backcountry and into isolation.

It delivers impossible curves and stunning vistas. When the driver travels this road, he can only wonder just how the hell some long dead highway engineer who laid this path along the ridges and around the escarpments had the imagination and sheer guts to plan the route. Those pioneer contractors followed the Cherokee trails and deer paths through the challenge of the Great Smokey Mountains and endowed upon this beautifully tortured land an impossibly amazing stretch of passable highway, a road eventually dubbed “The Tail of The Dragon”. 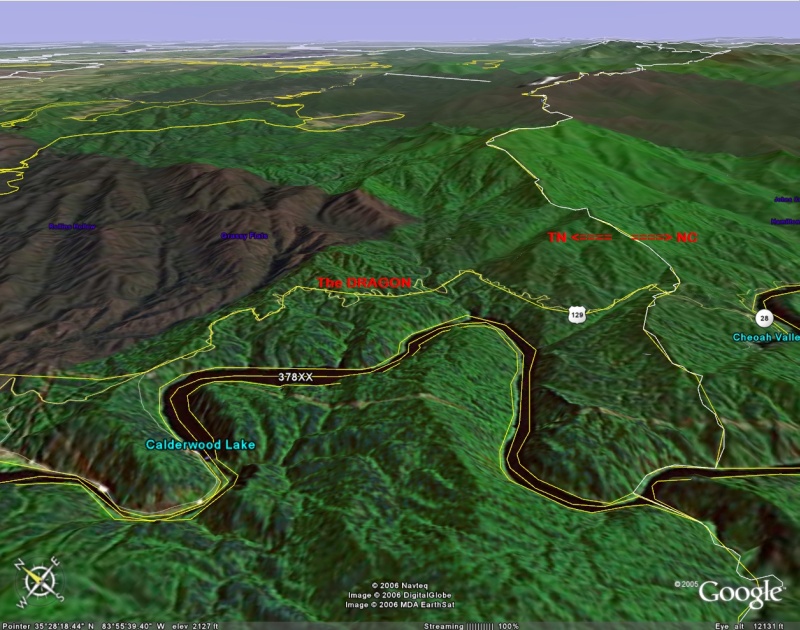 I have the little shoulder patch in front of me now, a memento of one of the times that I wrestled with The Dragon, that time when I spun the 350Z into a 180 heartstopper across a skinny piece of mountain road, at a blind curve, in the rain. The patch is yellow and black, shaped like the familiar “Caution” sign, and it says–“DEAL’S GAP–318 CURVES IN 11 MILES”.

i have intimate knowledge of at least one of those curves.

The road was bordered on the left by a sheer wall of rock. On the right was a clean, two hundred foot dropoff, unsullied by fencing, certain death if explored any further. I downshifted the Z through the wrong revs as I tried a wet-road drift around the curve, spun it, recovered it and learned the real meaning of caution. I also learned how to sweat profusely in air conditioning.

I had to drive back several miles before I found a place wide enough to turn my car around and continue onward. As I passed the spin spot, I gave an involuntary shudder. I saw what might have been and realized how totally lucky I was. It was THAT scary. I didn’t try any more fancy shifting that day.

I’ve passed through and around each of those curves six times now. Twice in the Z car, twice in the Infiniti G, and once in a lumbering van–which was no fun at all .
( On my second trip on the Dragon–in the Z–I drove the road full-out, turned the car around at the North Carolina terminus and drove it BACK into Tennessee, tasting each delicious mile once more, then I turned again, shifted through what felt like a thousand gear changes and got back into N.C. That time was the most fun I’ve ever had with my pants on. I didn’t stop grinning until Atlanta).

The Dragon does that to you. It’s probably the most challenging road in the Eastern U.S. Bikers discovered it, enjoyed it and and named it. They saw its’ 11 miles and hundreds of curves as the ultimate balls-to-the-wall challenge. I discovered it by chance, looking for a sports car experience and a backroad passage to Knoxville. All I had done was follow US 129, a blue highway that passed through the Appalachian foothills. What I found was serendipity, a gift, a genuine driving experience. 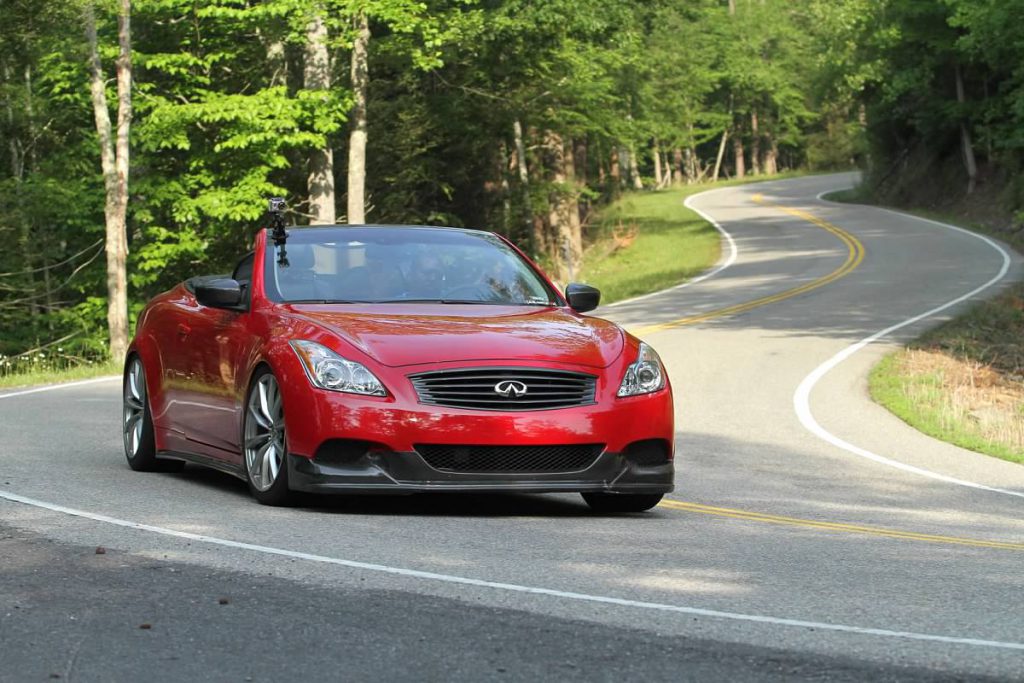 The Dragon has been the guest star in several Hollywood productions. Robert Mitchum played a furtive moonshiner, blasting down The Dragon (BEFORE it got its’ name) in his ’32 Ford in the classic “Thunder Road”, and Harrison Ford, playing a fugitive in “The Fugitive” dove off the Cheoah Dam, trying to evade Tommy Lee Jones, who had a gun. You can see that dam near the N.C. terminus of the Dragon. There’s a wide spot where you can park and see it. If you’re ever there, stop. It’s worth it.

Also, the cops are very familiar with the road and the designs that folks have for it, so it’s heavily patrolled, making, I’m sure, lots of cash from the adventurous drivers who blissfully avoid the posted limit. I managed to tear through the thing several times without gaining any points on my license, but that was just luck, like when I recovered from The Spin of Doom.

There is a LOT of traffic on the Dragon these days. A lot of people–like me–have discovered it and make deliberate pilgrimage there, so prepare for disappointment if you hit the road at the wrong time. Early morning seems the best time. It’s also the prettiest time to drive into the mountains.

On one of my trips through, I got behind a delivery truck. The driver appeared to be semi-paralyzed with fear, so he drove really slow, which caused me to trail behind him for an eternity. There was NO way to pass, so I had to suffer through mile after mile of third-gear driving. Finally, a rare, straight stretch appeared and I was able to pass, but it really took away some of the fun factor, forced to drive the Dragon that way.

I make a habit of finding and driving interesting roads. I’ve done The Blue Ridge Parkway a half-dozen times in all kinds of vehicles and weather, purposely avoiding the posted speed; I’ve roared up US 12, alongside the whitewater rapids of the Locsha River in Idaho, I’ve crested the Continental Divide at Yellowstone at illegal speeds and have driven the Dragon’s cousin, a challenging road named “Diamondback” ( …N.C. 226A, out of Little Switzerland, N.C.–find it and try it. You’ll love it…), I’ve raced against ricer bikes down Highway 60 out of Globe, Arizona–but never have I found a better way to pass the time and scare the whee out of me than traversing the Dragon. It’s a perfect sports car highway, designed to extract every last skill from the driver who decides to take it on. 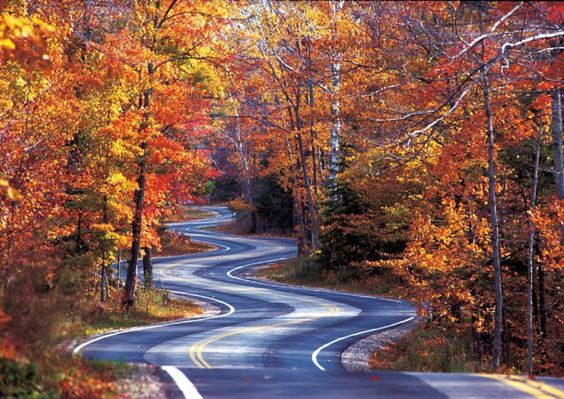 One should not approach the Dragon timidly. One should realize what lay before him and attack it. That’s the only way to fully appreciate what those old time highway engineers birthed when they paved the rocky Indian trail, breached the wilderness and presented the traveler with the ultimate challenge. Just don’t try anything fancy if the road is wet.

Sometimes, in the higher passes, the road will drop into a shallow valley. The clouds touch the trees and little pockets of fog settle into the hollows. You find these places unexpectedly, while rounding a blind curve or cresting a hill, and for a brief moment you are enveloped in the fog. your forward vision is stolen, and you drift from tree-dappled sunlight into a dreamscape. The breath of The Dragon envelopes you, and you understand, as you pass back into clarity, that you’ve just had a golden moment, a driving experience that will never leave you.

Editor note: NICOclub hosts an annual event at The Dragon – As I enter this article, I’m about to board a plane to Knoxville to join the crew. Hope you’ll do the same next year.