The Nissan leaf was first shown to the public in December of 2010. For those of you who are not “in tune” with the environmental movement, the Nissan Leaf is a zero-emission vehicle, ok, electric car, with a 100 mile range and an electric motor system which generates 107 horsepower and 207 ft-lb of torque. Utilizing a fast-charge system the Leaf can be replenished to 80% of its full capacity within 30 minutes. Quite a feat. From a performance perspective the Leaf unofficially does 0-60 in 7 seconds and tops out at 94mph. Not too shabby for an all-electric vehicle that some liken to a catfish.

Since release the Leaf has received quite a few awards including the 2011 World Car of the Year, Top Safety Pick 2011 from the Insurance Institute for Highway Safety, Top-10 green cars from Kelley Blue books, Wards 2010 Best Engines’ award, and the Popular Mechanics Breakthrough Award, among others. So, the Leaf is eco-friendly, environmentally safe, has a decent range for city driving, charges quickly, and is being acknowledged by “the industry”. That’s good and all but what does this have to do with racing and record breaking?

Nissan is investing quite an effort to garner a positive image for their little electric car. Part of this effort has been to run the Leaf, and variants of the Leaf, in multiple road racing events around the world. The Leaf has been outfitted with racing tires, roll cages, and even aggressive body kits in its quest to be seen as something more as a simple city eco-warrior.

Unleash the Beast: The NISMO RC 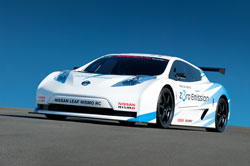 The Leaf NISMO RC was released in April as a prototype. This Leaf received an all-new and aggressively style carbon fibre body with aggressive stance, colors and spoilers. The full fibre monocoque body was built in three pieces with removable front and rear sections, has fixed windows, LED headlights and taillights, and a fully adjustable rear wing. It sits on a wheelbase that is 3.9″ shorter but the car is actually 0.8″ longer and 6.7″ wider than the factory Leaf. From a height perspective the NISMO RC is 13.8″ lower overall than the factory vehicle with ground clearance limited to 2.4″ vs 6.3″ in the factory variant. Overall weight is 40% less than the factory Leaf as well. No changes were made to the driveline of the NISMO RC. 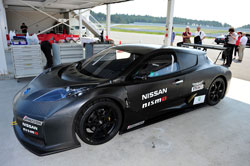 In June the NISMO RC performed two demonstration runs at the Circuit de la Sarthe outside Paris. This made the Leaf the first purpose-built zero-emission racing spec production vehicle in the world, nonetheless the first to run the Le Mans circuit. Prior to this event, an all black race-prepped version of the RC did a shakedown run at Sodegaura Forest Raceway. Nissan’s Chief Operating Officer Carlos Tavares was behind the wheel of the electric race car, for a Le Mans event called the “Le Mans vers le futur”. Overall it took Tavares 22 minutes to lap the track while following a slower BMW. At no point was the car really put through its paces, I’m afraid. 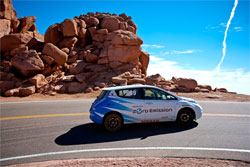 On June 26th a nearly stock Nissan Leaf took part in the 89th Pike’s Peak International Hill Climb with veteran Nissan off-road truck racing champion Chad Hord behind the wheel. It competed in the Production Class for electric vehicles and, other than the removal of some interior parts like seats and carpets to make room for safety equipment such as a roll cage, racing seats and safety harnesses, the LEAF was very close to the way it left the factory. With a time of 14 minutes and 33 seconds the Leaf set a record for being the fastest production electric vehicle to take on the event. Yes, it’s also the first to ever accept the challenge as well. The only other electric vehicle running this year was a open wheeled purpose-built race car which completed the same run in 12 minutes and 20 seconds, a new record of its own. 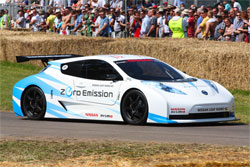 A record is a record it seems and Nissan was wanting two of them. In July, Nissan attended the Goodwood Festival of Speed with a Nissan Leaf, a Nissan Juke, and the NISMO RC prototype. The goal was to set two records while at the event. The Nissan Juke proceeded to set a new record for running the entire hill climb on two wheels in 2 minutes 55 seconds – Wait, what? You read that right. On two wheels. With FOUR people in the car. The Nissan Leaf was set to perform its record attempt by running the course backward but officials determined it was too dangerous at the time. Also at the event was the Nissan Leaf NISMO RC which ran multiple passes with a best time of 66.33 seconds.

What’s Next?
Nissan has claimed they want to set more records and really show what their little electric car can do. So far, so good.