Introduction:
Erratic idle is one of the most common problems with our cars. This is caused by the number of  engine components that are affecting it, such as: IAA (Idle Air Adjusting unit), Air Regulator, Throttle Bodies, Injectors, CAS, fuel delivery, vacuum piping. This article will cover the three components mentioned first.

IAA-unit:
This unit consists mainly of two valves: FICD and AAC. The FICD valve compensates for RPM drop when AC compressor is activated. The symptoms of the FICD failing are idle drop and vibrations when switching on the air condition.

The AAC (Auxiliary Air Control) valve is controlled by the ECU (PWM-control) to set the idle speed to a pre-programmed level. The ECU switches the AAC on and off very fast and thereby is able obtain a gradual opening of the valve. The AAC opening ratio can be observed on a Techtom MDM-100. If the valve is completely closed at idle it could mean that the idle screw is not adjusted correctly (too much air enters through it) or there is a vacuum leak (could be dirty TB’s not closing all the way).

Very often is the IAA unit (pictured below) diagnosed faulty and replaced. Since it costs ~$200 it’s worth to take the time and fix it yourself. Just as long as the solenoids are electrically intact there’s not much that can go wrong with this unit. 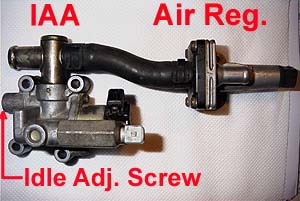 First off, check the solenoid resistance (don’t forget to clean the connectors first, as your readings won’t be accurate on an old corroded connector).
FICD => ~22 Ohm
AAC => ~10 Ohm

You can also check the solenoid operation by applying 12V from the battery to its connectors (you should hear a click).  If the resistance is far off then you really need a new IAA-unit, if not then read on.

Remove the IAA from the plenum. It’s attached with 4 screws. There is also a gasket between the IAA and the plenum. I reused the old one since it wasn’t broken. Disassemble the solenoids as shown below. Check if the spring inside them is not broken. 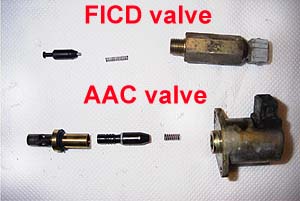 Now clean the solenoids and the IAA-unit casing with brake cleaner or similar solvent. Reassemble and it should be as good as new.

The regulator consists of a bimetal-activated shutter that closes after ~5 min of engine operation and cuts off the airflow. NOTE: It’s normal that the shutter is only partially open at room temperature.

Check the resistance between the pins in the connector. It should be ~75 Ohm. If not, then replace the whole regulator. Another problem could be that the regulator is clogged, causing the shutter to stick. The air regulator is located on the rear of the plenum and is attached with 2 screws. There are 4 screws keeping the housing together. Remove them and clean the regulator internals (see below). Reassemble and move on to the next step. 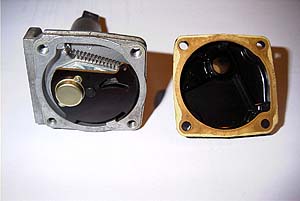 Throttle Bodies (TB’s):
Dirty throttle bodies can be the cause of unstable idle and hesitation.
Remove the rubber hoses attached to them. Twist them and pull (push them further on to the intercooler pipe to give more room to remove). Detach also the small hoses beneath the TB’s. Use an appropriate detergent to clean the TB internals. I’ve found brake cleaner or carburetor cleaner to work well. Use a toothbrush to scrub on the surface. Dry and reassemble. 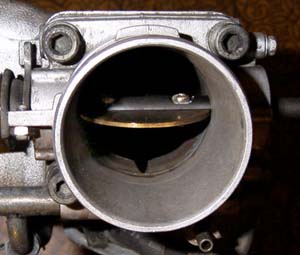 Some people reported that after cleaning the TB’s they had to reset the ECU to get the idle speed down. I would suggest disconnecting the negative battery terminal before you start cleaning the TB’s. It takes ~30 minutes for the ECU to forget what it has learned and that is how long it will take to clean the TB’s.

After cleaning the TB’s the idle may need to be readjusted as the amount of air entering the plenum may have changed (depending on how dirty the TB’s were). Adjust the Throttle Position Sensor first (see Part 2) and then adjust the idle as described below.

Idle adjustment:
Normally the engine should idle at ~800RPM. If it’s to high then you should try to adjust it. Here’s how:
Let the engine warm up to normal operating temperature. Put the transmission in neutral gear. Disconnect the connector on the AAC valve (pic 2). With the idle screw (pic 1) adjust the idle according to the values listed for the different Z models:
NA AT = 720 RPM
NA MT = 650 RPM
TT = 700 RPM

Reconnect the AAC and you should hear the engine rev up a tiny amount. That means that AAC is working correctly and the ECU has control over the idle speed now.

IMPORTANT! The purpose of the idle screw is to set the bottom value of the idle and let the ECU control it. If you adjust the screw for higher idle than the above then the ECU is no longer in charge of the idle speed.

If you’ve got a Techtom MDM-100 then the idle adjustment is easier.
Let the engine warm up fully and watch the AAC opening on the MDM while you’re adjusting the idle screw. Adjust it so that the AAC is 15%-20% open. If you’re not able to reach the 15% and the MDM shows a value below that even with the idle screw fully in then you’ve got a big vacuum leak somewhere, so this article will come in handy: How to Find Vacuum Leak on Z32.

Once you’ve completed all of these steps, it’s time to move on to Part 2 of this series: 300ZX Z32 Tech – Curing Erratic Idle Issues (Part 2).