The Infiniti QX56 full-size luxury SUV might be best known for its leather-trimmed, 7-passenger interior and technological advances like the world’s first Around View™ Monitor, but its real claim to fame could be its powerful, 400-horsepower 5.6-liter V8 engine and 8,500-pound towing capacity. Offering strong low-end torque, smooth operation throughout the entire RPM range and peak torque of 413 lb-ft, the Infiniti QX certainly has “power to go, power to tow” credentials in spades.

Now, in a unique twist on putting the cart before the horse, Infiniti has embarked on a one-off project to add QX power to what’s being towed – a boat modified around a QX engine and designed with the luxury, performance and craftsmanship of its flagship SUV.

“The genesis for the Infiniti QX-powered luxury boat project came about when a group of us were talking about our full-size SUV’s standing as the perfect luxury tow vehicle – capable of carrying tons of weight, and lots of people and their cargo, in style,” said Infiniti Americas Vice President Ben Poore. “So what better object to tow than a boat custom-outfitted to QX-inspired standards, starting with its powerful but fuel-efficient engine and continuing with semi-aniline leather on the seats, XM® satellite radio system with NavWeather™ and Bose® speakers, and signature Infiniti analog clock.”

The first step in the Infiniti luxury boat project is well underway with the extraction and maritime prep of the QX engine. With assistance from Infiniti engineers and training managers, a team of automotive technical training program students from Tennessee Technical Center-Nashville and Nashville State Community College removed the 5.6-liter engine and 7-speed automatic transmission from a 2011 Infiniti QX. Infiniti donated the rest of the vehicle to Tennessee Tech for continued use in their automotive curriculum. 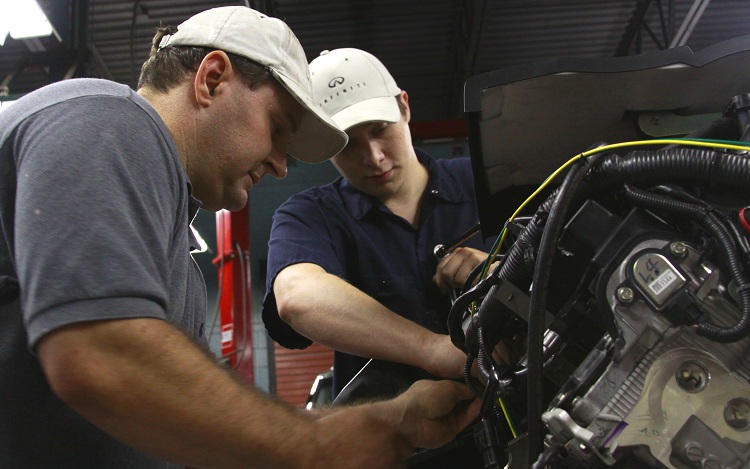 The assignment, supervised by school instructors, was to not only remove the engine but to determine how to make it work outside the vehicle, using components such as the starter and electronic control unit, as well as removing extraneous systems, such as the power steering pump, which aren’t needed to power a boat. And, given the complex nature of today’s advanced engine electronics, controllers, processors and emissions systems, engineers at the manufacturing facility in Decherd, Tenn. – where the Infiniti QX56 engine is built – lent a considerable amount of time and knowledge to making sure the engine performs as well on water as it does on terra firma.

“It’s great to involve students from the local community in this project, especially since Infiniti QX engines are manufactured in nearby Decherd, Tennessee,” added Poore. “It’s our hope that someday students in these automotive programs who will learn from the Infiniti QX we donated to the Technical Center will go on to work at our company or Infiniti retailers’ service departments.”

With the engine removal completed, the Infiniti QX-powered luxury boat project is now being prepped to debut by next boating season. Project updates, with teaser photos, will be provided along the way at facebook and twitter. Fans and followers of these sites will soon also have an opportunity to name the Infiniti-powered boat.

Battle of the Ballers – QX56 vs Escalade!