Welcome to the latest installment in our Test Drive Tuesday series! Today, I drove the 2013 Nissan Sentra. This car has been on the market for a while but I wanted the opportunity the give you a full review of both the manual transmission and CVT models. It took a while to find one with a manual but Charlie at *Peoria Nissan* came through for me. Please follow the link at the end of the article to join the discussion on the forum. I’d love to hear your feedback on the article.
Thanks,
-Bex

The 2013 Sentra is a complete redesign, inside and out. Last August, Greg was invited by Nissan to the reveal of the new Sentra in Dallas, TX. The exterior styling is very similar to the new Altima, giving the 2013 Sentra a much more upscale look than previous models.

Both of the cars I drove were Magnetic Gray with the Charcoal cloth interior. The SV had the CVT and the S model had the manual trans. The front seats in the SV were much nicer than the ones in the S. If I were buying this car, I’d buy the S but try to find a way to get the SV seats. If you have read any of my other reviews, it’s a well known fact that bad seats are my pet peeve. If the seats are bad, I won’t like the car and I won’t reccommend it to anyone else.

The attention to passenger comfort is phenomenal in this car. The back seats are very comfortable and the available leg room is more on par with a mid-size car. I looked up the capacities and was amazed to find out that the Sentra has more rear leg room (37.4 in) than the Civic (36.2 in), the Mazda 3 (36.2 in), the Ford Focus (33.2 in), the Altima (36.1 in), AND the Maxima (34.6 in). It’s pretty remarkable that the Maxima is twice as expensive as the Sentra and yet it has almost 3 fewer inches of rear legroom. A great example of “less is more”. 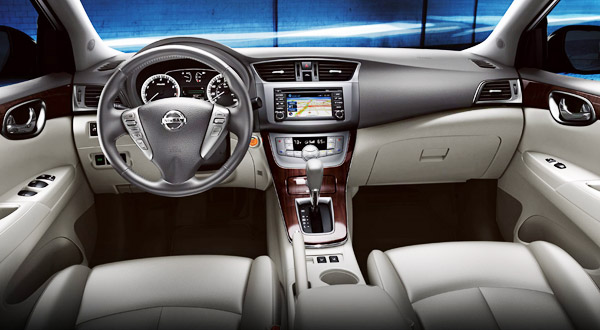 The plastics in this car are acceptable but they do look like they’ll show signs of wear sooner than later. The controls on the dash are very user-friendly on both models. The audio and climate controls are within easy reach and have an intuitive feel. All models come standard with A/C, power windows, remote keyless entry, tilt steering, an AUX port, and power windows. The SV model also has audio and cruise controls integrated into the steering wheel and an upgraded cloth package for the seats. In the S model, the manual gear shift is well placed and shifting through the gears is a smooth and effortless process. The Sentra has 15.1 cu. ft. of cargo space. Once again, it outshines the much more expensive Maxima which only has 14.2 cu. ft. of cargo space.

Finally, let’s talk about what really matters, performance. All models have a 1.8L 4 cylinder motor that delivers 130 hp and 128 ft lb of torque. That delivery is largely affected by the transmission. Most everyone knows my disdain for pairing the CVT with any motor with less than 2.5 liters. It makes the Sentra boring to drive, slow to respond to throttle inputs and it serves no huge benefit on this car. The mileage numbers for the S and the SV models are so close, there’s really no reason to eliminate the fun factor of rowing through the gears yourself. The S gets 27/36 mpg and the CVT gets 30/40 mpg. That’s close enough for me. Thank you, Nissan, for giving us the option!

There was a lot of grumbling in the enthusiast community when it was announced that the current model was going to have less power than the previous one. 130 hp vs. 140 hp. It seems like a raw deal for the consumer, but to be fair, let’s take a look at this from Nissan’s point of view. Part of Nissan’s three-point strategy to increase performance and efficiency has been weight reduction, aerodynamic improvements, and cutting drivetrain friction losses. The curb weight for the manual 2013 is 53 pounds less than the 2011, the CVT is 111 pounds less. That may not seem like a lot but when you are talking about a car with a lower horsepower motor, every pound counts. The proof is in the numbers. Fuel economy with the manual transmission increased from 24/31 in the 2011 to 27/36 in the 2013. The CVT model increased from 27/34 in the 2011 to 30/40 in the 2013. So, while the current Sentra packs less horsepower than the previous generation, it’s getting the same job done more efficiently, and 0-60 numbers appear to be comparable.

For those of us who would prefer more horsepower and a third pedal than efficiency (myself included), hopefully Nissan will give us a Spec-V option sometime soon. When comparing the Sentra to the other cars mentioned earlier, I believe it is the best value for your money. If I were to buy this car, I would buy the manual trans S, upgrade the seats, and buy better tires. I would advise you to log on to Tire Rack and do some research to find out which one is best for you. A good set of performance tires can greatly improve the overall ride quality and handling of any car and help eliminate annoying road noise.

Lastly, we have two teenage girls who will both be driving soon. I can honestly say that I would not hesitate to put either of them in a new Sentra. If you live near Peoria, AZ and you’d like to drive either version of the 2013 Sentra, please go by and see Charlie at *Peoria Nissan*. Ask him to introduce you to Robert Griffin (yes, that’s his real name). He’s my new test drive partner-in-crime and he really knows his Nissans. He’s an awesome guy and he’ll treat you well.

Once again, I really hope you enjoyed this article and that you’ll consider the Sentra the next time you go out for a test drive. I think you’ll find it’s a lot of car for the money. Please feel free to log onto the forum and join our discussion. Your feedback is always welcome!