The car had been hit several times over the past years of competition and I was getting discouraged with SCCA’s rules enforcement of our amateur “no contact sport”. What to do?

I had always wondered if I could round up the old turbo parts and restore the car to its original configuration. I had actually gone to Houston and inspected the engines in the late 90’s at the Pro Am race shop. They had purchased the engines for a DSport project. Pricing was too steep so I passed. In July 2000 I got a phone call from Mike Unger regarding selling the car. It turns out he had acquired the turbo engines and parts and was interested in restoring the car to its IMSA configuration.

Side Note: Around this same time, the car was featured in the book, “How to Modify Your NISSAN/DATSUN Engine” by Frank Honsowetz. This book has been required reading for any true Datsun / Nissan performance enthusiast since its publication in 2000, and if you don’t have it, GET IT. 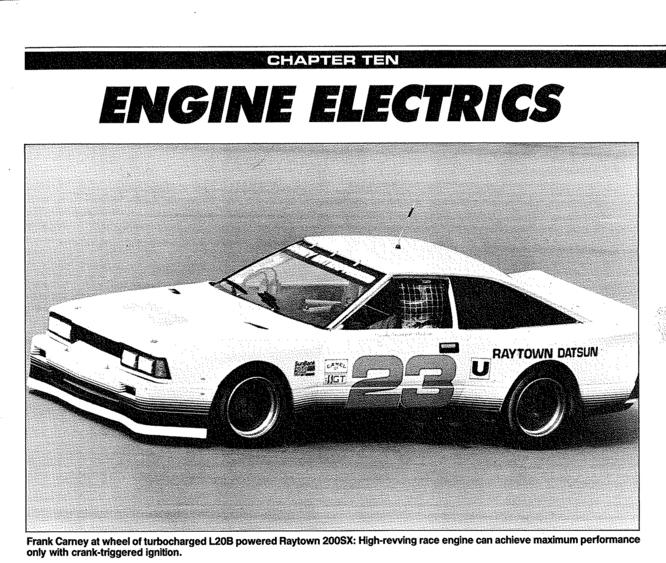 Long story short, I traded all of my L20B parts for the turbo engines and parts because Mike had several SVRA vintage cars that could use my parts, and the restoration started. It was like putting a puzzle together with several of the pieces missing or able to be used in several different places. I had to describe what I thought a part looked like to Mike on several occasions and he would then find the part in the “spares” he had decided to keep.
Eventually after a lot head of scratching, temporary fabricating, bad language, frustration and calls to Don Preston, I got the car to the point that I thought we could get it running and drivable again; but nothing fit the SCCA modified chassis. No one would even attempt to build the headers locally because of how restricted the space had become because we modified the car from McPherson struts to unequal length A arms for SCCA.

And, I had specified 29 inch tube length based on Burns Stainless Steel engine computer program recommendations and to reduce the lag as much as possible. The upper control arm support tubing that EJ had installed was just in the way. Turns out the special design and fabricated cantilevered McPherson strut suspension left a very large open space for the turbocharger and headers on the driver’s side of the car. I cut the car up enough to accommodate the original headers and a new ATS turbo and had Don Preston build an extended bell housing adapter (11-12 inches) to mount the Jerico ultra-close ratio 4-speed to the engine and got it about were I wanted it to end up. No front suspension upper pick up points on the drivers side existed now. I had to find a fabricator to continue with the major modifications. I had always intended to do the hydraulics, oil line plumbing, water piping and wiring myself. The alternator is driven off a custom built drive shaft pulley (see below): 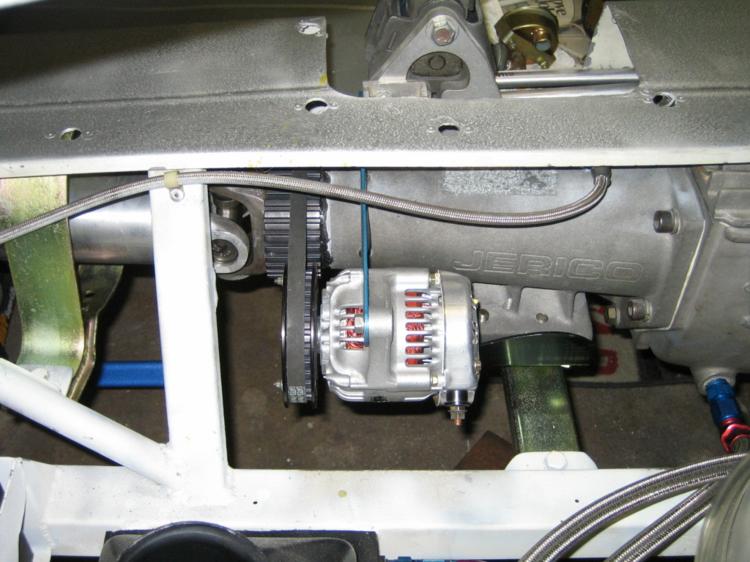 A small race car shop (The Race Car Factory) in Stuart, Florida agreed to take on the completion task. Randy, the owner, was a header wizard and lived up to his reputation. The original ARE dry sump pump proved problematic so I had one custom built by Daily Engineering.

After several months of consultation the car was modified to a point were we could now start putting it back together in earnest. However, some of the original dimensions and positions for auxiliaries that were chosen, proved to be incorrect, and the car went back to the shop twice as well as to a friends shop once. The car was not finished when it finally came to my garage, but it was far enough along that my limited fabrication skills and garage equipment could complete the restoration. After months of tubing, hose building, brackets, mounting and wiring it was ready to start up.

Note the 29 inch SS headers (spaghetti, anyone?) and the ATS turbo. 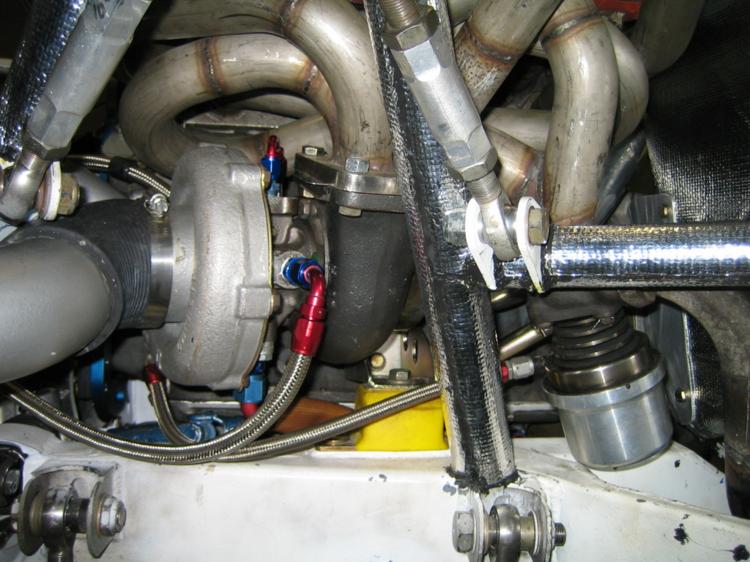