One of the most misunderstood and incorrectly-done DIY projects for the automotive enthusiast is bleeding brakes. Sure, it sounds easy, and the old “two-man pump and bleed” process seems like a simple task – but it’s actually a terrible way to properly bleed brakes.

On top of that, it’s also a messy, time-consuming job. So much so, that most people don’t ever bother with it – they figure as long as they stop when they hit the pedal, they’re good to go, right? Wrong.

Professional brake technicians know that trapped air kills the response of even the most tricked-out high-end brake systems… You can have multi-pot calipers, huge slotted rotors, stainless lines, and track pads, and they’ll STILL get outperformed by a properly-functioning stock system. Why? Because air is compressible. Extremely compressible (how many PSI will a shop compressor handle?)… and that tiny bit of air leaves any brake or clutch assembly mushy, weak and dangerous.

The ONLY way to do a brake fluid service properly is to completely remove trapped air, making sure your brakes perform perfectly and giving a rock-hard pedal.

So, this past year at SEMA, I spent some time talking with the guys from Phoenix Systems, the industry leader in professional brake bleeding systems. We discussed a couple really problematic applications I’ve encountered (such as a Datsun Roadster with the bleeders pointing DOWN), and they showed off their Phoenix Systems V12 Brake Bleeder system, which can perform 4 bleeding methods, depending on your application, in order to force air out. 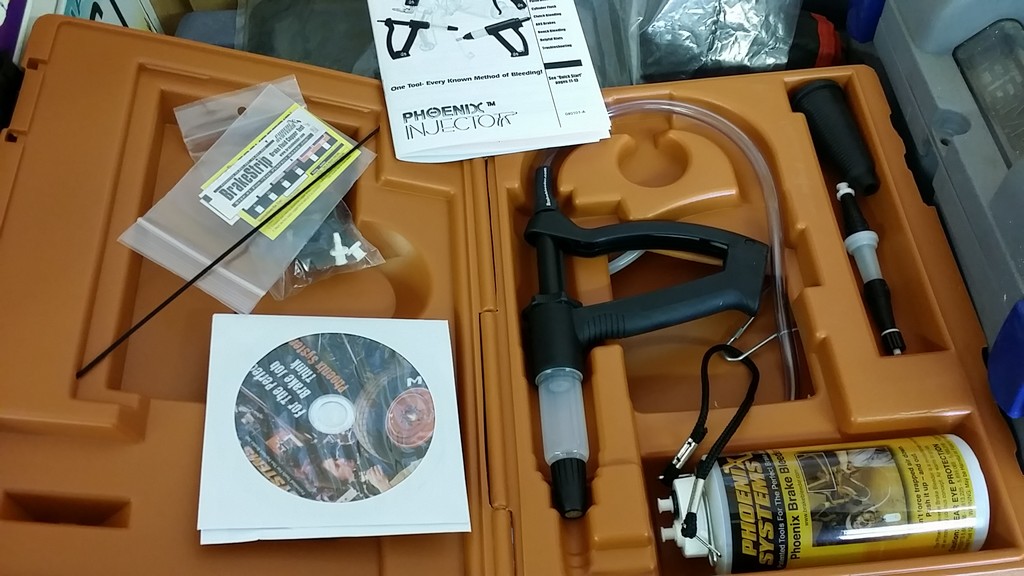 We’re going to do a complete brake flush on a C5 Corvette Z06 today… This car belongs to a good friend who happens to be an accident investigator – He’s seen, firsthand, the results of brake failure. We’re not taking any chances, and neither should you. 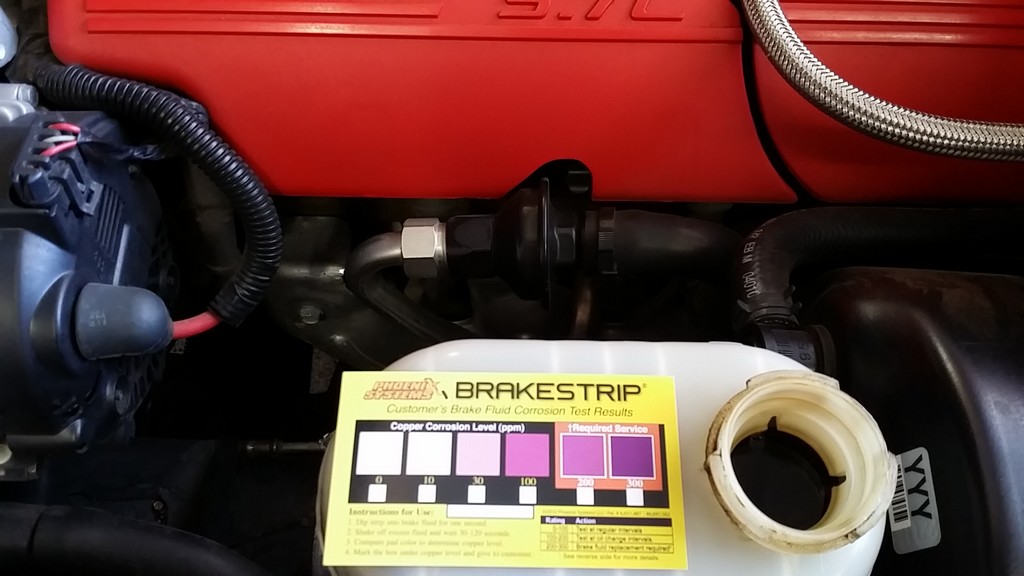 Simple process – Remove the master cylinder cap and dip the strip for one second, then wait 60 seconds and read the results. 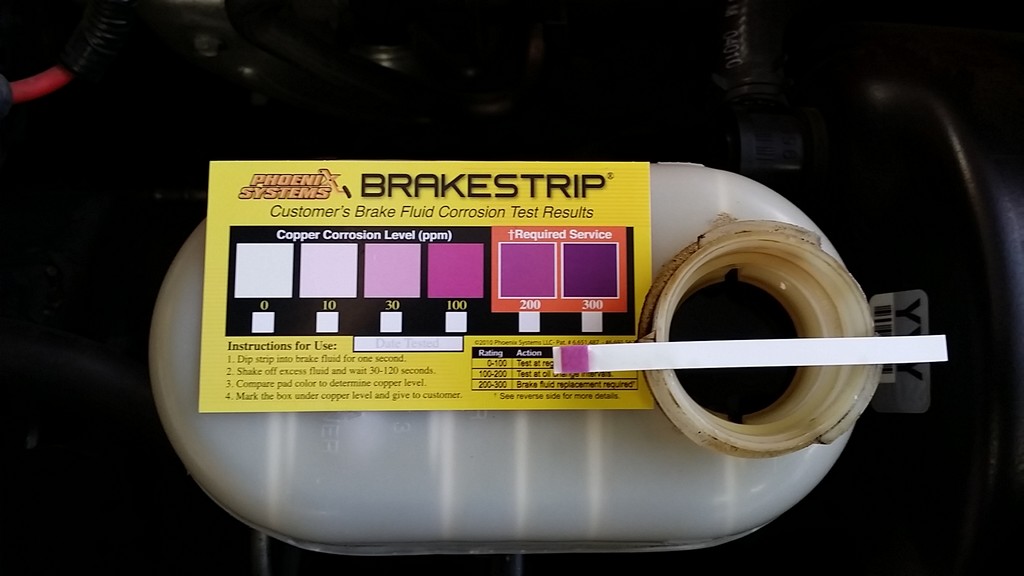 Now, this fluid has been in the car for two years… I know, because we flushed it ourselves when we upgraded the brakes. The dark color consists of numerous contaminants, including seal material (suspended rubber molecules), as well as corrosion from inside the metal lines. Remember, brake fluid is hygroscopic, which means it absorbs moisture from the air. This allows corrosion in the lines (and inside that expensive ABS pump), and it also affects the fluid’s boiling point, meaning your brakes can underperform or fail under severe use.

Clearly, it’s failed our test… which is great, because we’re flushing it! 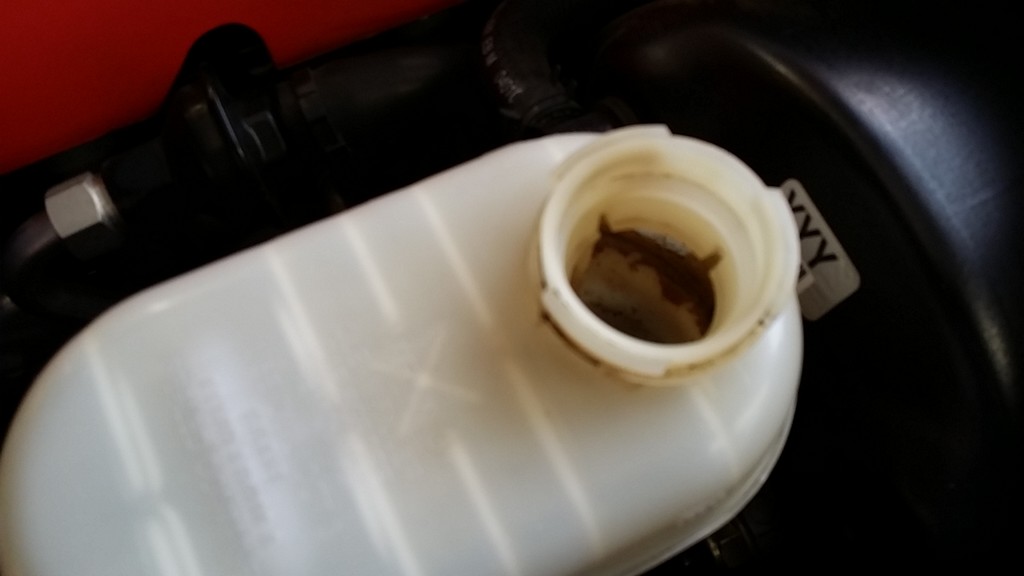 The first step was to clean up the master cylinder reservoir as best we can. We did this by pumping the old fluid out (using an old cheap brake bleeder) into a container. I didn’t use the V12 bleeder, because I don’t want ANYTHING except pristine, fresh fluid in my new bleeder! Check out this nasty mess: 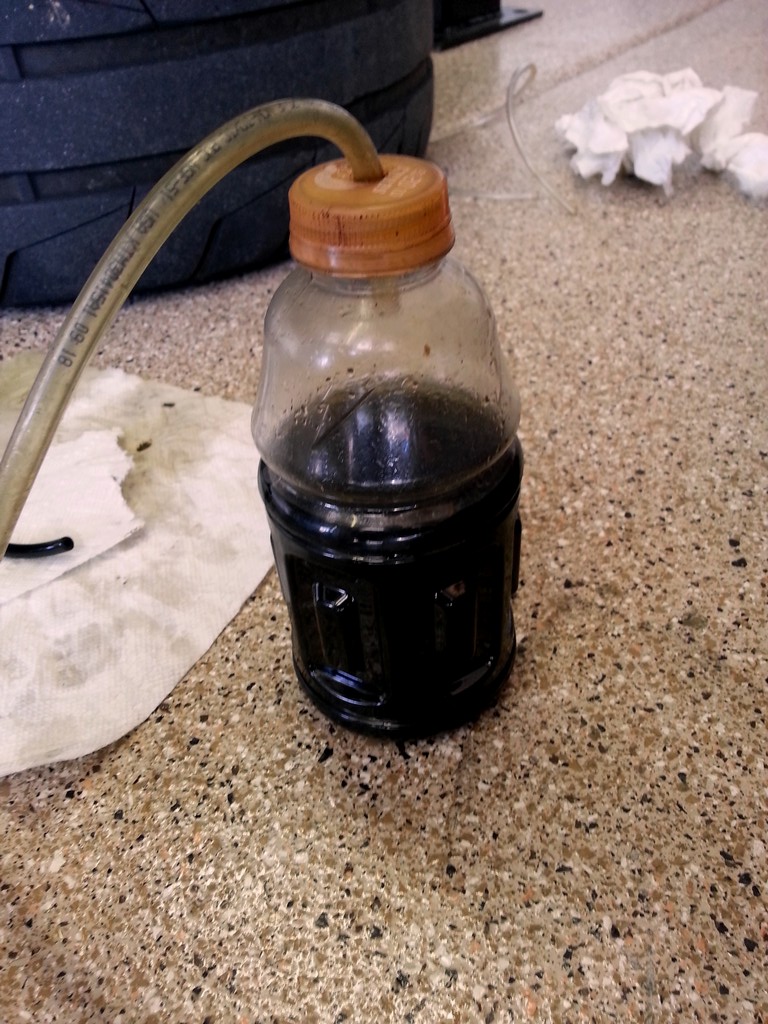 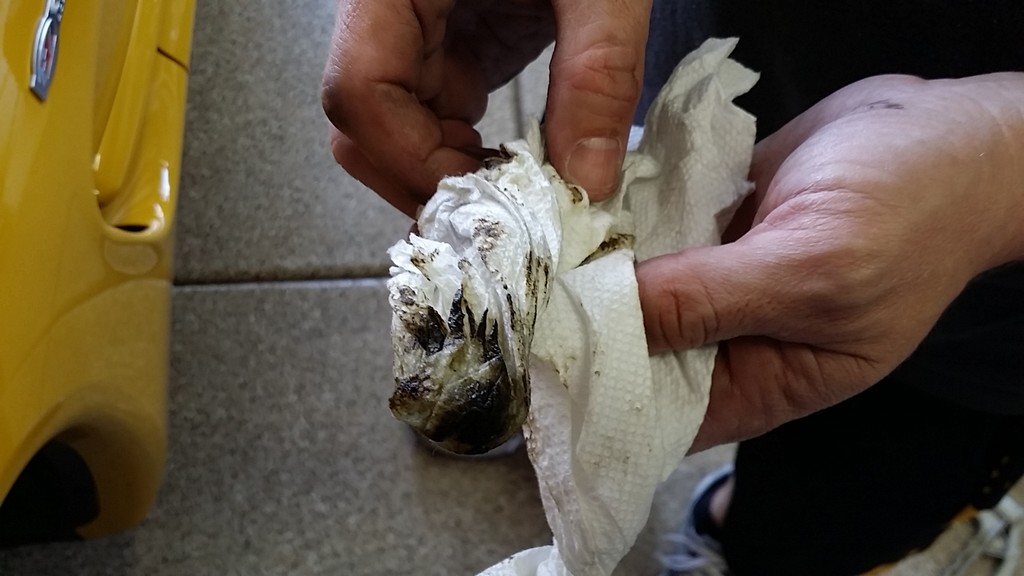 The rest of the task is relatively simple. With the car on 4 jackstands and all four wheels off, we assembled the V12 bleeder to reverse-bleed the brakes. This means we’re going to be pushing fluid from each caliper, UP to the master cylinder. With the nose of the car slightly higher than the rear, this allows us to get ALL of the air out of the lines (as well as all the old fluid).

Using the Professional V-12 was super-easy. No drips, no leaks, and ONE person can do the whole job.

Speaking of which, some of you are probably thinking, “Yeah, but I got a buddy to pump the pedal, I crack the bleeder, wait for the fluid to squirt out, close the bleeder, and I’m done.” That’s nifty – but you’re doing it wrong.

That method takes the internal components of the master cylinder FAR outside the normal “stroke” range, which is a very good way to tear a seal. It also doesn’t allow all trapped air to exit the system, as the bleeder threads themselves are often a key leaking point. Lastly, unless you’re going to do a LOT of stroking and pumping, you’re just pushing the contaminants down into your calipers – which aren’t cheap to replace.

Starting at the farthest wheel from the master cylinder, and working my way forward (RR / LR / RF / LF), the actual bleeding process took about 10 minutes. About four strokes of the trigger per corner pushed dirty fluid up into the reservoir (where we could suck it out easily) until the fluid came up clear. 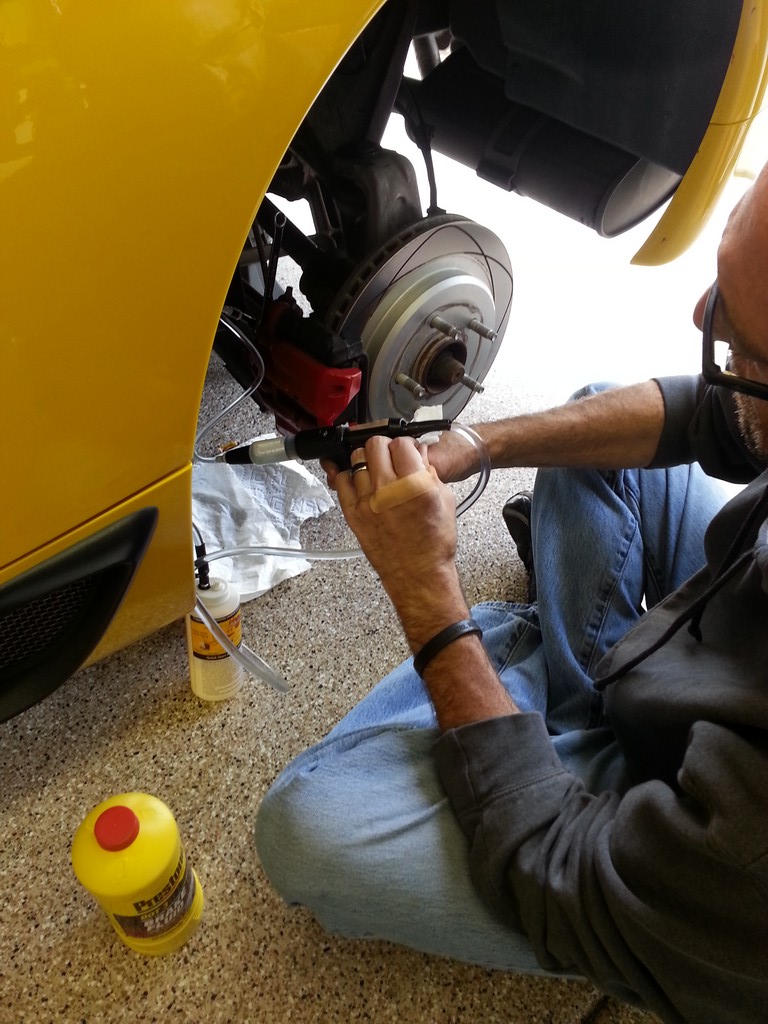 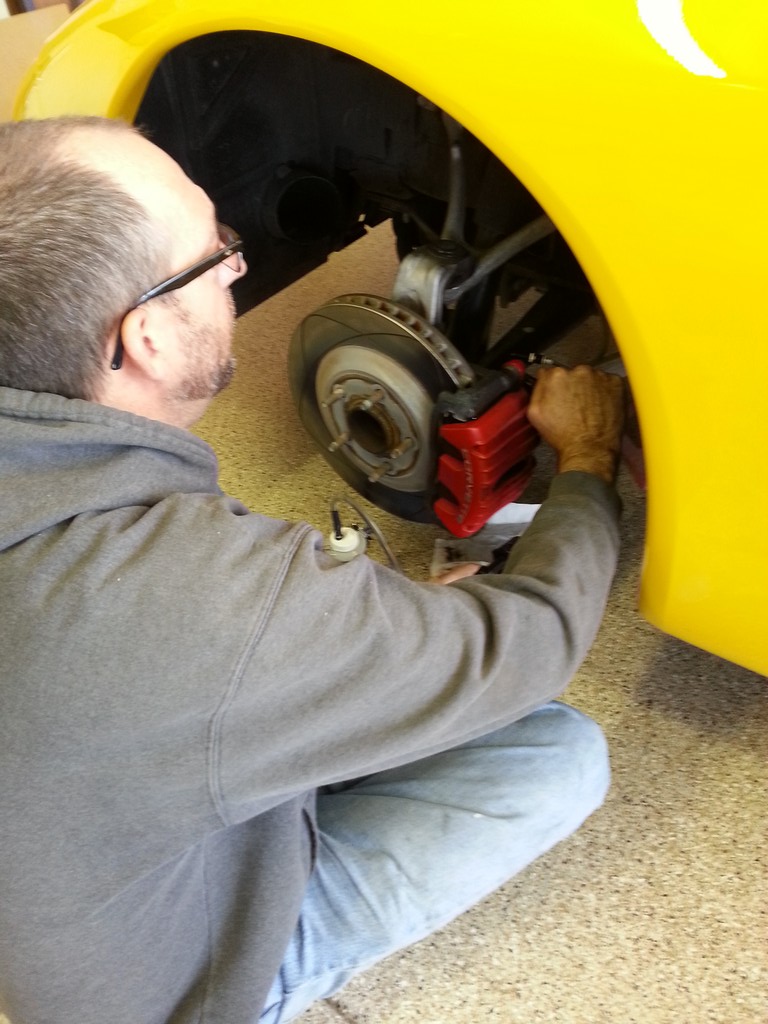 On the fourth corner, it was really cool to see the master cylinder fill up with pristine, clear fluid. 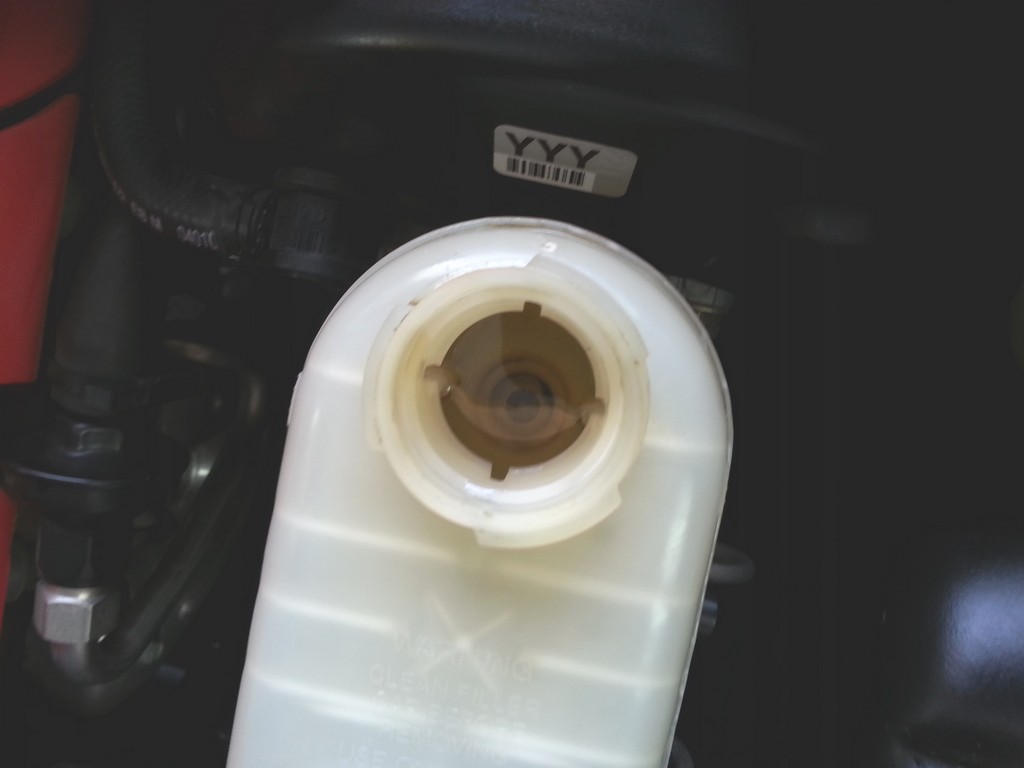 I’m totally sold on this system. In fact, if you’ve got a group of car nuts who like to do “Tech Days” like we do here at NICOclub HQ, it’d be a great thing for everyone to pitch in for – you could do brake fluid flushes for everyone in the club in a day, and teach them what you’ve learned here in the process.

The V12 system also works for bleeding clutches – another regular maintenance task that most DIY guys do terribly wrong.

So, there you go – I hope this was helpful, and if you have questions about the PhoenixSystems bleeder kits, you can check them out at BrakeBleeder.com!