Straight line or Curves… The age old tug-of-war in performance car building in backyards all over America.  Whichever way you go, you need solid, reliable and high performance suspension.  Personally, I like curves (and yes I’m talking about cars)! Recently I wrote an article covering installation of the new PowerTrix Ultralite coilovers into my 1990 Z32 (300zx) affectionately named Shibui… Well recently I was able to take her up to ZdayZ in North Carolina to put the new setup to the test! 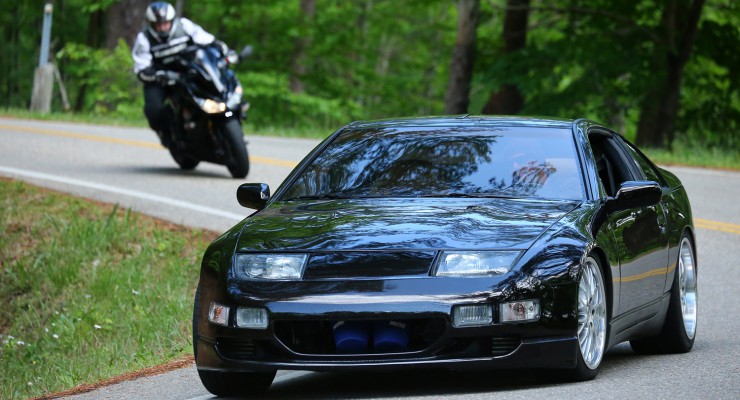 Last year, Shibui was on KYB AGX adjustable struts and Megan coilovers.  The car performed fairly well with the exception of a tail wag into the other lane once because the rebound of the suspension lightened up the rear end as well as the occasional roar of rubbing that sounded like Bigfoot after being in captivity for a week without food.  But other than that, I was pretty content.  But since I don’t like the feeling of death threats of oncoming traffic with my rear end sticking out, I decided to get with Charles and his team at Powertrix.com.  Now it was time to put it to the test and drive the Dragon again with the new setup…. WOW WOW WOW! If I weren’t so excited, I could end the article there and it would sum it up pretty well!

Not only was the rubbing gone, but the control of the vehicle was so much that I would literally grunt in the corners!  We are talking about a 25 year old, heavily front weighted car with as much technology as a Nokia 5100 (yes I had one back then), but yet I was able to control it to the degree of fear!  I kept saying to myself “This is going to be where it breaks loose, this is it!” and would begin to grunt as I pushed the throttle coming out of the curve, and yet it held – it felt almost as though I could feel the tires on the ground, so my confidence level in the car went through the roof!

Not only was the performance great, but I was extremely impressed with the ride when I turned the knobs down to its lowest setting to soften it up.  To paint the picture, I drove the car from Central Florida up to Fontana Village, North Carolina – Some 12 hours of driving with friends in a Nissan/Infiniti train of performance cars ranging in colors that would make Skittles jealous. But 12 hours of driving on a performance setup was a bit nerve-wracking at first because I’m no spring chicken. But I have to say I was thoroughly impressed with the range of adjustment allowing me to get out after the long drive without groaning like a bear after hibernation.

To sum up my review, I do not think you can find a better mixture of performance and price for your Z31-Z34 as well as S13 and S14 cars than with the Powertrix line of coilovers, and the knowledgeable staff just puts a cherry on top!  I believe I may look into some more adjustable goodies from Powertrix in the near future… Until then, below is a video from one of my runs. I sped up a couple spots where we got stuck behind locals 🙂

Z32: How To Install Coilovers