· Nissan Juke Nismo Concept shows what the future might bring

· Wider range of after sales performance parts to be developed 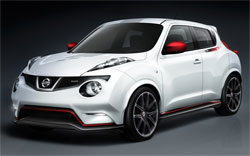 “Nismo adds even more excitement and innovation to Nissan products. We now plan to inject that style and excitement into other models in the Nissan range,” says Shoichi Miyatani, President of Nismo.

As an indication of what the future might hold, one of the highlights of the Nissan stand at the show is the Juke Nismo Concept, a high performance version of Nissan’s genre-creating compact crossover. Finished in Nismo’s signature colour scheme of pearl white with subtle red highlights, the Concept boasts performance tuning for the suspension, more power from the 1.6-litre direct injection turbo engine and a stylish yet functional aerodynamic body kit.

Nismo – the name is derived from Nissan Motorsports International Co., Ltd – has long been a highly respected performer on the race tracks of the world.

In 2011, Nismo-developed Nissan GT-R racecars won the Drivers’ and Team titles in Japan’s SUPER GT championship and also took the Drivers’ title in the FIA GT1 World Championship. Nismo-developed engines won their class in the Le Mans 24 Hours and the company has also developed the remarkable trail-blazing LEAF Nismo RC, the zero emission racing car based on the worlds’s first mass-produced electric car. Its arrival heralds a new era of eco-friendly motor sport.

But the company’s road car activities have, until now, been restricted to halo performance cars like the Z series in a small number of markets. That is about to change.

“Nismo has carved out an enviable reputation in motor racing,” said Carlos Ghosn, Nissan President and CEO. “In fact, in 2011, Nismo cars and engines won in every category they competed in… the first time we have achieved this milestone.

“The time is now right to let ordinary drivers experience what our racing drivers enjoy every time they head out onto the track. We aim to bring Nismo’s passion and focus on driving excitement to mainstream models, and the Juke Nismo Concept shows what we can do,” said Mr Ghosn.

As well as producing complete performance versions of Nissan models, the company plans to expand its range of performance parts and accessories while another element of the expansion programme will see Nismo relocate to an all-new purpose designed global headquarters in Tsurumi, Yokohama at the start of 2013.

By bringing all Nismo’s activities under one roof, the move will create a global centre of excellence for race and performance road car development. As well as a race shop, the centre will have a large maintenance area for service work, a heritage area where famous Nismo race and road cars will be displayed and a specialist store – the Omori Factory, named after Nismo’s current base – where customers can buy performance parts and items from the Nismo Collection.

The larger site will also have ample space to hold more of the popular Nismo events for fans. And the annual Nismo Festival continue to attract more than 30,000 fans ready to celebrate the company’s racing heritage and achievements at actual racing circuit..

Nismo connects with its supporters through the hugely-popular Nismo Festival, drawing upwards of 30,000 fans to its annual year-end extravaganza. The festival represents “Nissan Racing DNA” and features the cars and stars from Nissan’s sporting past, as well as examples of its current racecars.