But I’m a Sedan guy?

Its 5:23 am Sunday morning, I am on I-10 headed east speeding between the photo radar locations. I am on my way to Firebird Raceway, on “Special Assignment” from NICO to photograph and drive the new G37 Convertible.

The new G37 Convertible has been a blurb in all my car magazines for a few months now with many guesses at what the car will look like. Indifference best describes my mood, it’s a new Infiniti but I’m a sedan guy. Convertibles are chick cars, sacrificing precious pounds for the ability of the driver of the car next to you to see your spray tan and fake Prada earrings, or so I thought.

Arriving at the track just after 6am it’s just the Infiniti of Scottsdale crew and me. I find Mal, the sales manager, and introduce myself. As we walk over to a group of new cars it is apparent the new G37C is hiding under a cover. Mal warns me that it is a hideous shade of red.

As I help him with the car cover I talk about what I want to do with the car. I want to get it away from the group. Park it on the track for some photos; get it over to Firebird Lake for some sunrise on the water shots. Mal says do whatever I need to do, just have the car back by 7am and keep it on the racetrack property. See, this car doesn’t have a license plate and is really just a running prototype destined for a car crusher at the end of its PR tour. Miraculously, in a moment of insanity, Mal hands me a plastic grocery bag with keys to all the new Infinitis at the event which consist of an FX50S, SEMA Stillen G37, G37S, G37 sedan, FX35, M45 and the new G37C. 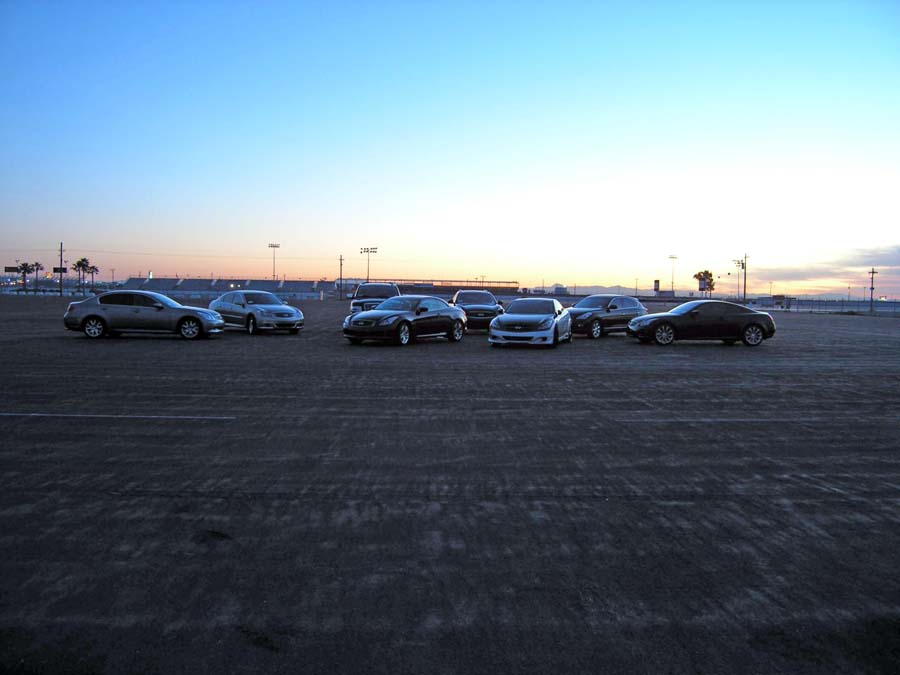 As I am photographing the group in dawn light I start to wonder if I could sneak all these cars off property before anyone notices. Mal comes back and wisely asks for the rest of the keys back. Mal also thanks his guardian angel that I was filling in for Greg (AZhitman), who’d have already shagged three of the fleet on the track by now.

I fire up the G37C, and immediately noticed the exhaust sounds is a little racier then my G35 sedan. Quickly, I remind myself I am a sedan guy. I get in and move the car into gear after a quick warm up. Pulling out onto Firebird’s technical short track, I have to remind myself I can not hot lap this car regardless of the pressure my right foot is wanting to put on the accelerator. Fifteen miles per hour has never seemed so slow. Parking in turn 2 of the course I get out and start shooting. The lines are different then my sedan with the front haunches having a masculine look as if the car is a cat which is ready to pounce. The back reminds me slightly of the mid 90’s 240sx if only so slightly. I find myself staring at the car wasting valuable time and wasting natural light. 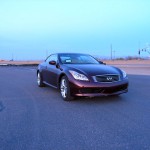 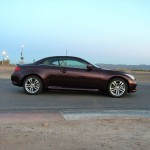 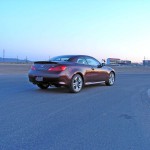 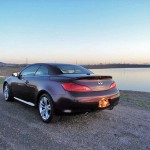 Back in the G37C I fire up the motor again and immediately think the exhaust tone sounds even better the second time. Not wanting to disappoint, I’ve recorded it for the masses to experience. Once jumping back into the leather-laden G, I realized that I was already past the last entrance to the track and decide I was forced to drive around the track again to reach the pit entrance. Being responsible I don’t push it past 20 miles per hour regardless of wanting to see what she would do. Exiting the track, Mal flags me down; I think I’m in trouble for going around the track but he just wants to shine the tires and dust the body. This is a chance to pop the hood and check out the engine. When the tires are clean I hop back in and drive over to the lake. My timing is perfect; the first red orange rays of the sun are piercing the dark blue dawn sky. 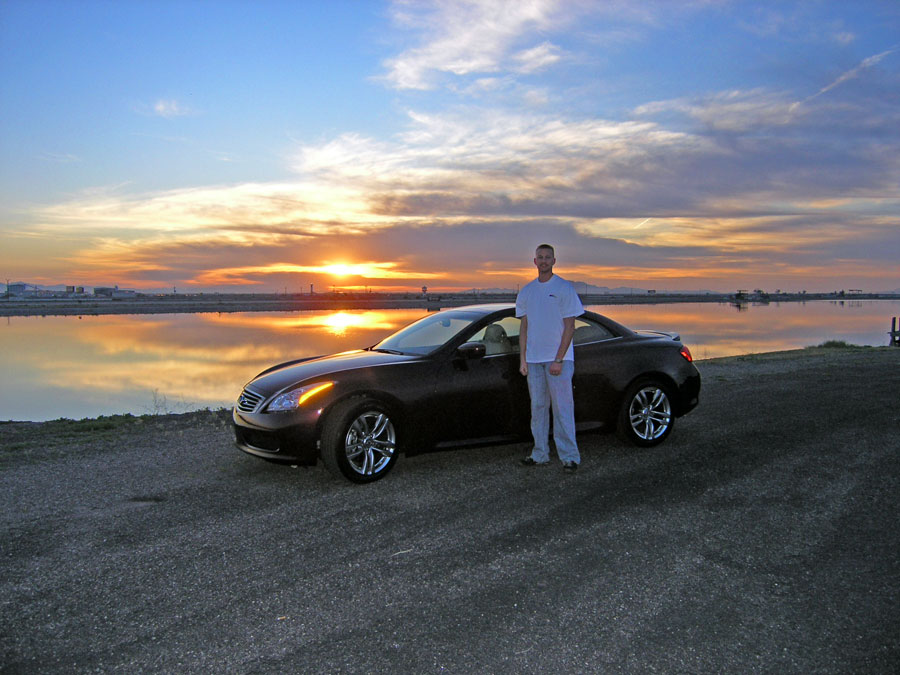 I quickly park the car with the back against the water and get some ‘rising sun’ pictures with and without flash, slow and fast shutter. The first thought I had, while looking through the lens was “This car is so sexy” and I took the opportunity to actually take some pictures of me with it. Unfortunately it was time to head back to the pits, hoping to beat the Infiniti Engineers. I can imagine Mal trying to explain why the G37C is off with some kid that bought a used 07 Sedan from him two years ago. 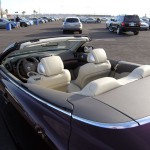 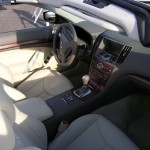 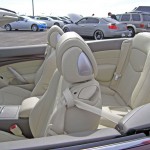 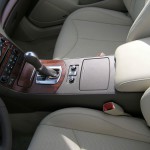 Throughout the day I keep finding myself taking pictures of the G37C. People start asking me about it. I try to justify the sedan over it, few hundred pounds heavier, 7 speed, low roof line and look at the ugly burnt red paint, which is not really bad on the car itself. I see my friend, pro driver Amy Elizondo and thought to get some pictures of her with the G37C. I don’t know what it is about this car but I simply can’t stop taking pictures of it. 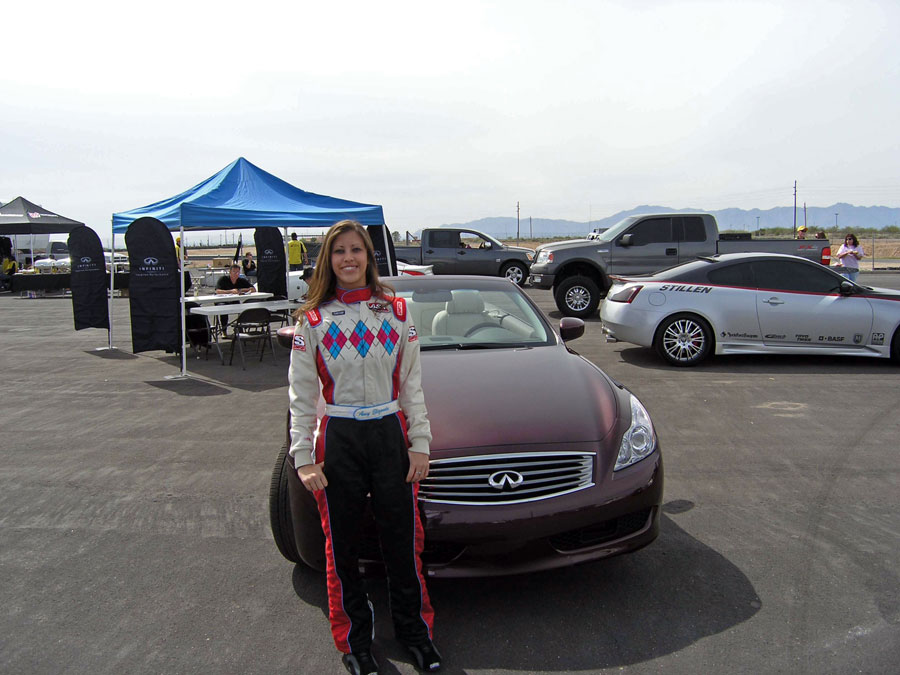 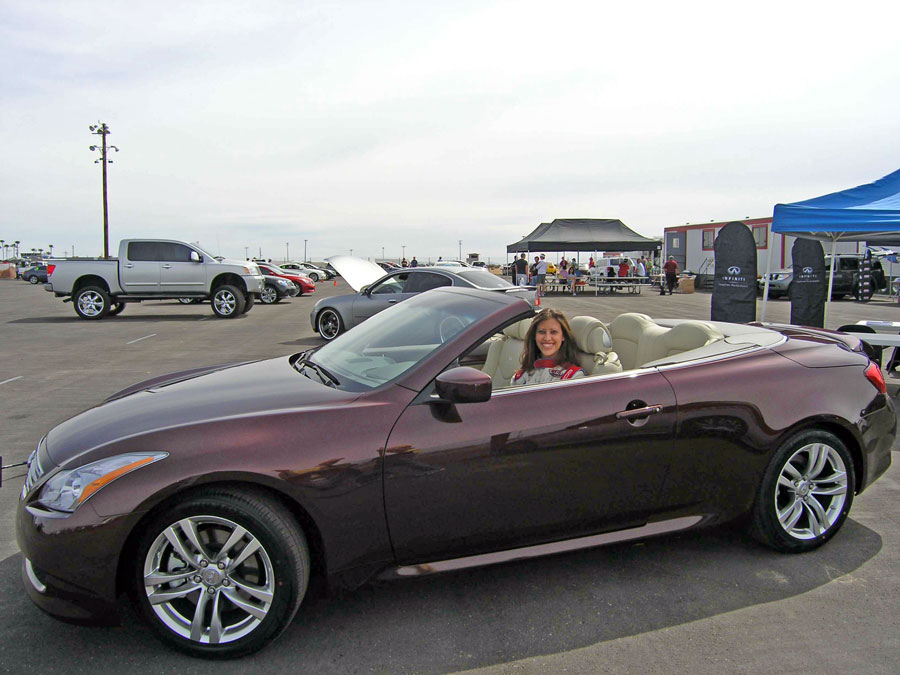 As I was there to race, my buddy and I head out on the track for our 3rd heat. We are driving with the windows down, wearing nomex socks and helmets, talking about the G37C. We head into turn 7 and I feel a slight pedal pulse while slowing from 85 mph down to 65 mph. In turn 8 there is almost no brake pedal left at all. Luckily the Kumho V710 racing slicks can scrub off enough speed which allowed me to stay on the track although I felt a 4 wheel drift for a few seconds at 60+ mph. Coming into the pits the smell of brakes is overwhelming. We park and I start to put on my street tires for the trip home when a twin turbo 2004 G35 owner comes over to borrow some tools and comments something is on fire due to the smell emanating from my car. Is it a coincidence that my sedan would have complete brake fade, for the first time, while I have been dallying with the G37C?

Finally, the end of the day has come and I have thus far resisted ordering a new G37 Convertible. I met with a nice Infiniti Engineer as he wanted a ride in my car and to talk with me about the future of the G35. After a short conversation I realize I was telling him how much I like the new convertible and was discussing cost instead of concentrating on the G35 I own. We are in my car at this point, flying down I-10 at triple digits without my realization. Is my sedan trying to get me a ticket out of jealousy? The engineer and I exchange email addresses and plan to meet for lunch at the end of the month.

Driving home I feel a little sick, I’m a sedan guy but I’m in love with the G37 convertible. It’s something I would not have believed this morning.