Editor’s Note: One of the biggest thrills of running the web’s largest online community for Nissan enthusiasts, for me, has been the opportunity to meet some of the influential people who made the Nissan nameplate what it is today. By simple happenstance, I recently had the great fortune to be introduced to Kas Kastner, one of the legends of Nissan Motorsports history, and he was gracious enough to indulge me in what must have seemed like hundreds of questions. I’d like you all to meet him as well, and I’m proud to be able to share his story with our loyal readers. 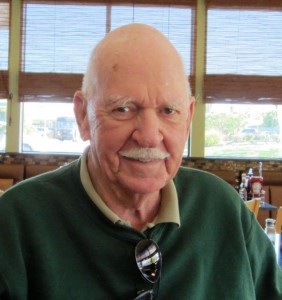 I was born and raised and went to school in Batavia, New York. This is a little town of about 17,000 folks that is older than any of the cities around it. Batavia was started by the Dutch in the early 1600s where they sold the Indians’ land to enterprising farmers brave enough to stand the weather and the threats of the wildlife (and wild people too). It is about 40 miles east of Buffalo, New York, the snow capital of the USA. Batavia got its fair share of snow, which is probably what prompted me to go head out west.

I graduated high school in 1945 at sixteen, but as soon as I turned seventeen, I signed up for a 2 year stint in the Army. That got me to Colorado – the wonderful West… Denver, Grand Junction, Delta, Montrose, working various jobs, generally as a salesman of some sort. The most fun was running the big pool hall portion of a great bar in Grand Junction, “Moslanders”. I had learned to hustle pool in the Army, a knack I had in high school, so it did provide an escape (and a bit of cash, too). From there, I moved to Delta to sell cars or something, then on to Salt Lake City, Utah (again to escape the weather). When I moved from Delta, Colorado, it had been a bit cold, the snow was not too bad but the warmest it got for two weeks was ZERO degrees. Salt Lake was a balmy forty degrees, which means t-shirt and moccasins weather – or, more importantly, driving weather. 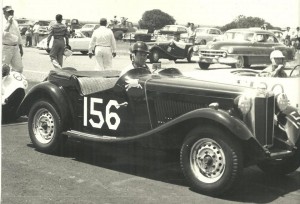 In Salt Lake City, I worked more sales jobs – Then the revelation of my life occurred. I bought a new 1952 MGTD. It was perfect. It was fast (for the times), handled wonderfully, and was an inspiration to me to be a top-notch driver. I practiced very early in the morning in the canyons before most people we out of their beds. I wore out the tires just over 4000 miles. 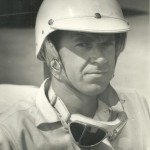 The dealer started a club for sports cars. I joined and got into timed events, hillclimbs, and autocrossing. I started right off to win. Then I entered the first real race, which was through the city streets of Aspen, Colorado. I placed second overall and first in class. I helped put on races in Salt Lake, then traveled to other states for races. Fort Sumner in New Mexico, Grand Central Airport in Glendale California, Pebble Beach in California. Some of this was in my first Triumph – a 1954 TR-2, and more in my MG Special I had built onto the frame of the MGTD I owned at that time.

By that time, I had owned about eight MGTDs. I’d buy and sell them – fix, repair, and tune and off they’d go to someone else. I did the first big repair on my MGTD, replacing a piston with the tools that came in the little kit with the car. In those days, there were no tools that fit the weird English-sized hardware, so it was always a fight to find the correct sizes. I was learning to be a mechanic. 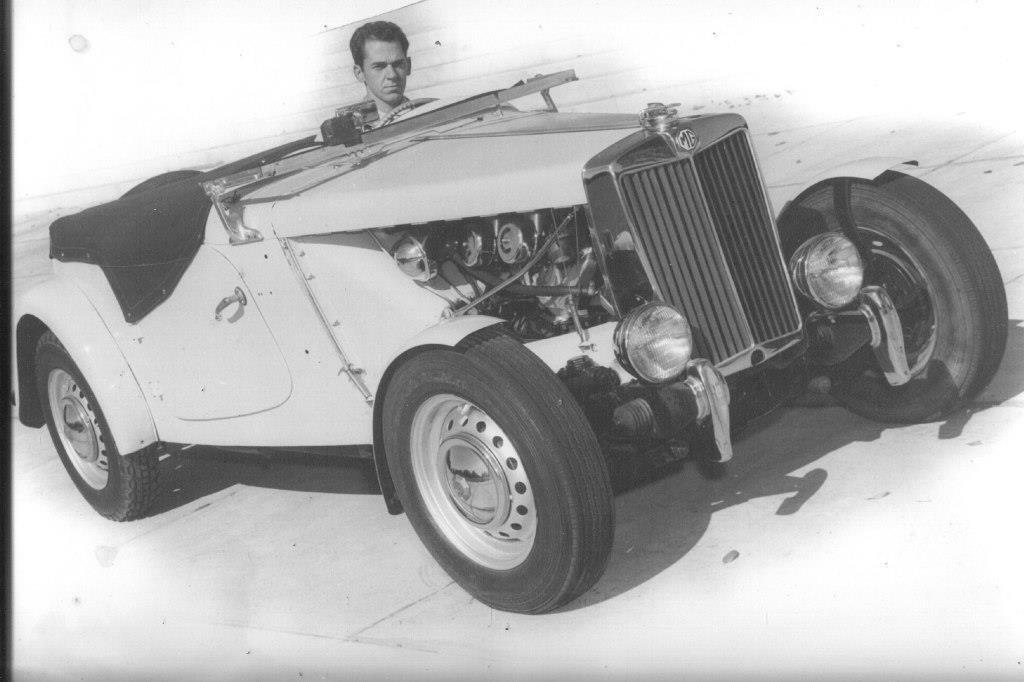 I got pretty good at repairing, and tuning especially. There was very little information available in those days, and no tools that fit the strange English sizes – so I sent to England for workshop manuals and for tools that would fit the English size hardware. I also acquired a full set of taps and dies for the English threads (which were also different). Before I knew it, I had a lock on the business – I could repair the stuff that other people broke. 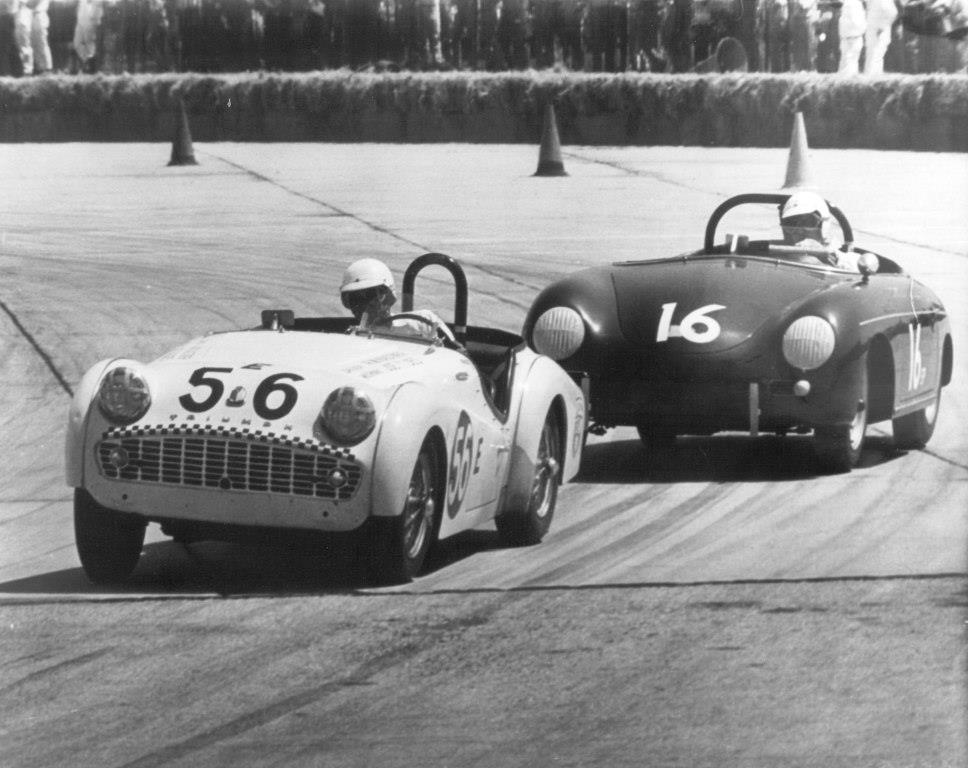 Kas pulling away from the pack in his Triumph at Santa Barbara, 1960

After a time as a manager of a service facility for the MG/Jaguar distributor, I opened my own shop. That’s when things got really hot with the modifications. The racing was hot too, and I was very successful, winning lots of the local events. My search for power eventually overstepped the durability of the engines. It was pretty sorry for a while – Fast for a few laps, then sit and watch everyone else still racing – at a slower pace. I still had a lot to learn about this stuff. 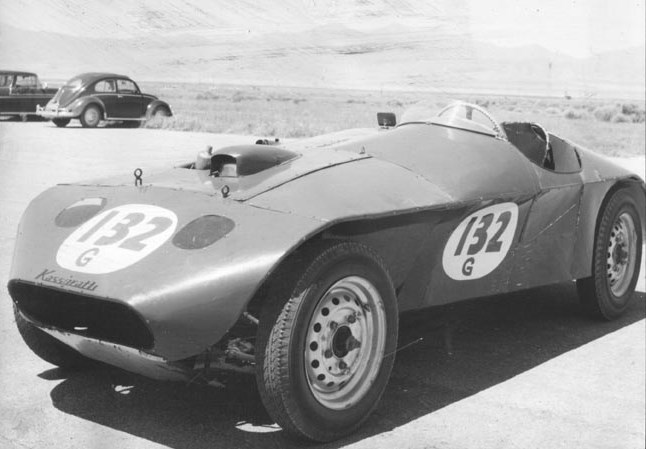 I built two MG special cars – Special body on a standard MG frame, and that taught me about how to really make stuff. I taught myself to weld, I learned about gearboxes, suspension, and all the other stuff needed to be a successful racer.

NEXT: Los Angeles and a sharp change of direction… Join us for Part Two!

Do it Yourself CVT Knob Removal and Bulb Replacement

Make Your Own Shift Boot!