It’s an unfortunate fact of an enthusiast’s life that the road is a littered with all kinds of objects that would like nothing better than to put a chip in your car’s paint – enter Dr. ColorChip.

My Z is a daily driver and while it’s never going to be a show car, I like it to look its best and each chip hurts me almost as much as it does the resale value of my car. I had considered ordering a touch-up paint pen from Nissan but they always seemed to be out of stock and I also wondered how long each one had been sitting on a shelf  – a dry paint pen wasn’t what I was looking for. I noticed an ad in Nissan Sport Mag, and while I was a little skeptical about the end result I figured it was cheap enough to try…and almost any result would be better than an untreated chip. I didn’t have to worry about how long the paint was sitting on the shelf either – each paint is mixed to order! I was more than happy to wait a little while for more order because I knew that I would would be getting fresh paint! Since I had a handful of chips I ordered the largest size repair kit, what Dr. ColorChip calls “The Road Rash Kit” and is suposed to be good for up to two dozen chips. 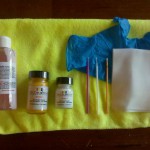 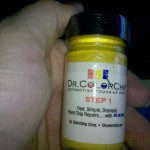 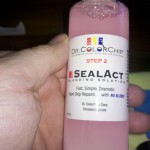 I also ordered a pair of sanding pens from Amazon to make sure every last bit of debris was out of the chip and make sure the repair would last. Unknown to me, there was a refill in the body of the sanding pen – so one is more than enough unless you’ve got a five car garage and a gravel driveway. I gave the car a good wash and ran a claybar over the my test/practice area to get rid of any grime the wash didn’t. 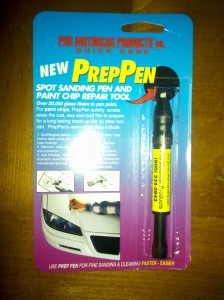 The test/practice area I selected the driver’s side fron wheel well. There were plenty of chips to practice on and if I didn’t  do a perfect job at least it wouldn’t stick out like a spot on the hood. The sanding pen did a great job at getting into small areas and making sure that the chip was completely clean before I started. I wasn’t expecting a miracle as my E33 – Ultra Yellow is a three stage paint and harder to match than a conventional colour. I dabbed the paint on, smeared it flat and waited a couple of minutes for to dry. I squirted some Seal Act on a cloth and cleaned the excess paint off. 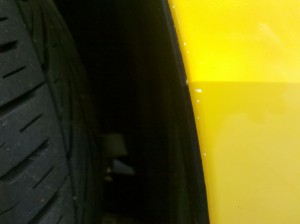 Well, what do you know…the chip wasn’t white anymore! The chips, while noticeable from close up because of their depth in the paint layer weren’t visible beyond a couple of feet. I did a few more and then decided to tackle a larger, deeper chip. It took more work and I can still see it, but with a few more treatments I’ve little doubt that it won’t be noticed by anyone but me. 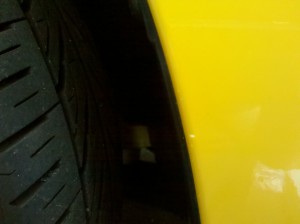 This was the result of using only the E33 yellow and the SealAct solution. I mention this because Dr. ColorChip also sends an extra bottle of paint for light coloured vehicles. Look back at the first picture and you’ll see a bottle that I didn’t mention until now. Lighter colours will often appear transparent, allowing the base coat to show through. Since the undercoat of the chips I was covering was white I didn’t bother with it but next time around I’ll use it to build up the paint layers on some of the deeper chips. That way I don’t have to use so much of the E33 color for a good result.

Alex (BusyBadger) is a 350Z Moderator at NICOclub and a long-time automotive enthusiast.

Do you own a Nissan Z? Join us in the Nissan Z Forum!