A full four minutes and 37 seconds passed, when suddenly he gasped for air – Marc was miraculously alive. By now, paramedics and the fire deparment were on the scene, attempting to extricate him from the destroyed car. The “Jaws of Life” severed the A, B and C pillars of Marc’s RB25-powered, D-Max S14. 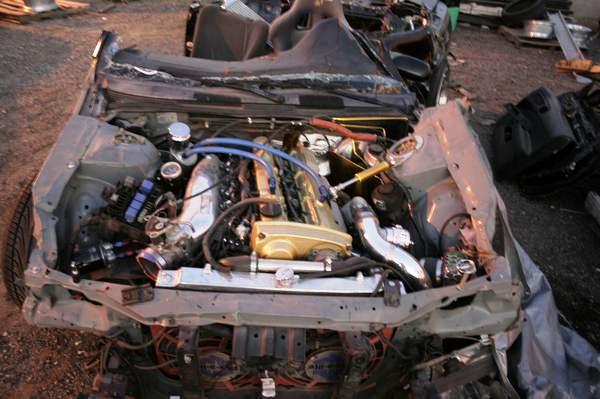 He was airlifted to the hospital, which would be his new home for the next month.

“I woke up in the hospital 2 weeks later”, Marc says. “My parents had to tell me what happened.” The doctors brought the grim news. A laundry list of fractures and injuries piled up – A broken femur, broken pelvis, broken sacrum, broken hip, broken knee, a severed bladder and torn urethra, and to top it all off, a wicked concussion. Cognitive function was seriously impaired due to the lack of oxygen to his brain – You simply don’t spend nearly 5 minutes clinically dead without having some sort of enduring effects. The rehabilitation would be brutal, and his doctors were very blunt: “It’s unlikely he’ll walk again, and driving is totally out of the question.”

Marc’s time in the hospital gave him plenty of long, quiet hours to think, reflect, and consider the loss of what was his greatest dream – To drift competitively at a high level. To make matters worse, although he had a lot of support from the local 240sx community, there were plenty of people to remind him what a foolish mistake he had made – some of the comments were downright brutal. Considering the local drift community has a strict, almost religious adherence to the “no street drifting” rule, and many of us have seen loved ones maimed or killed in street racing accidents, it was no surprise that Marc had to endure his fair share of backhanded comments. While we were all thankful he wasn’t killed, we all knew that it could have been one of our family members instead of a light pole.

After Marc was released from the hospital, he was still confined to a wheelchair – Remember, the doctors were steadfast in their prognosis – Walking wouldn’t be in his future – his pelvis was still held together with external bars. 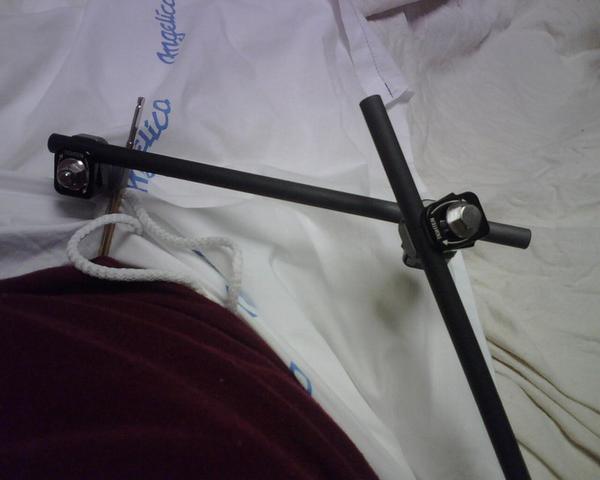 Two months later, he tagged along with Forrest Wang and Chris Smollack, among others, at a warehouse loading dock they used to practice at. This was the best spot between track days because the owner of the warehouse gave them the OK to practice drifting there, as long as they cleaned up afterwards. Marc says, “So I was there watching Forrest do 3rd gear long slides as he was practicing for the next Vegas drift. I had to get back into a car. So I told Chris to put me in his car and didn’t stop asking until he let me. They picked me up out of my wheelchair and put me in the driver’s seat along with pillows around my hips and my side. I took off, and got that addicting feeling back. I instantly got over any fear of driving again, even though it may have been the morphine I was on that kept me so calm and fearless. I’m glad I got back in the saddle that quickly, before any real fear could take hold.”

Another month went by and by this point Marc had been doing excessive physical therapy, 3 times a week, and was finally on his feet in November! According to Marc: “Even with a cane, it felt fantastic to be able to walk again even when the doctors said I woudln’t be able to walk for 4 years. After I got the taste of driving again, I had one thing on my mind. I started to build my new chassis, which was given to me by a close friend, Ryan Hampton. This was an s13 hatch he and I had stripped, caged and fully stitch welded a few years prior as a backup car. A few friends of mine helped me swap things over from my destroyed s14 including the suspension, brakes, wheels and the series 2 RB25 which all survived with no scratches.”

Marc’s story starts to pick up speed here: “I quickly ran out of money due to not being able to work for so long. I still had a $900/month rent payment to make, so building a car ended up being on the back burner. Luckily, Intensepower.com, my primary sponsor since 2007, had just bought a fully built s13 from one of their previous employees, Drift Alliance Ace, Blair Sato. At this point it was about April 2009 and I quickly got to work on this car to prep it for D1GP Round 1 in Anaheim CA. We were told the built SR20 had spun bearings so I pulled the motor out and started stripping it down. During this time we had the proper door bars added to ensure we would pass tech for the May 2nd event.” 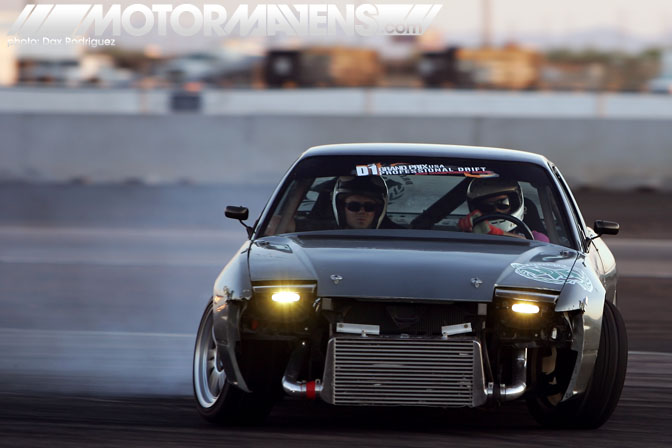 Marc started telling his family and friends that he wanted to enter the qualifying grid for D1GP in May. His family and friends knew how much this meant to him, but were a little uneasy with the thought of jumping back into the driver’s seat so soon after the near death situation he found himself in just 9 short months prior. 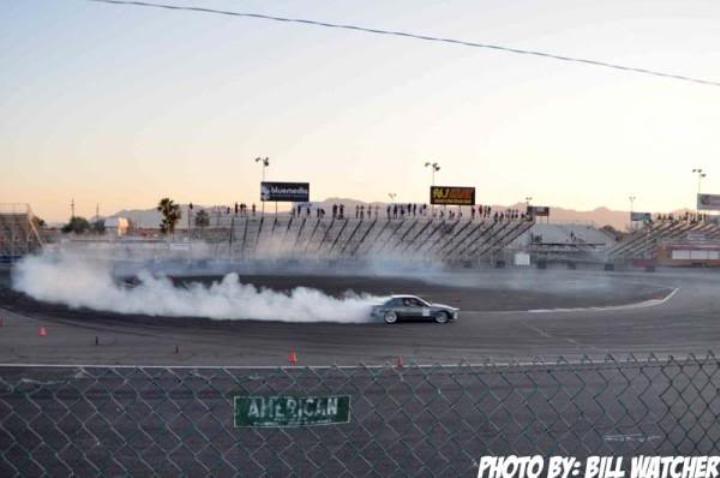 “We got the chassis back from the fabricator 3 days before we had to leave for California. We dropped the SR in, took it to Tony at UMS Tuning to refresh the AEM EMS but were maxing out the GT3071r at 270WHP. Something wasn’t right so we took it back to Intense that night and took off the valve cover to find out it had skipped a couple teeth on the chain, which changed the timing enough to cause the issue. We got it fixed that night, but the following day we had to load up and head down to Anaheim. This is where Murphy’s Law came into play – UMS Tuning was booked solid that day and had no openings on the dyno. So Tony was kind enough to do some street tuning, but we weren’t comfortable with doing 4th gear pulls on Broadway Road and Dobson in Mesa during rush-hour traffic. We ended up doing a couple 3rd gear pulls but I wasn’t at all comfortable on the street. Whatever Tony was able to do was what I would have to work with.”

Marc has always been known to go after what he wants, no matter how unsafe it may be… when it comes to driving, this was all he knew. He had a keen ability of rapidly adapting to different cars. Whether it be a stock SR powered weekend warrior, or a 450+ horsepower purpose-built drift car, he always knew how to push himself to 110% and make it work. But this wasn’t just a “Marc” issue – this would require everything coming together JUST right.

“We got to Anaheim by 4 am and slept in the Del Taco parking lot. Realizing I had only 2 used Advans for the rear, one 5 gallon barrel of VP Q116 and an untuned car, I knew I had to take it easy during practice runs if I wanted to make it into the top 32 qualifiers. Daigo Saito and Kumakubo were blasting my doors off during practice, as I struggled to reach top of 3rd gear on the entry – I was having to clutch kick 10-15 times down the straight just to make the first sweeper.”

Sitting in the car before his qualifying run, just nine short months after a near-fatal crash, Marc realized that this was his opportunity to accomplish his goal. He was sure to do whatever it took to make it. 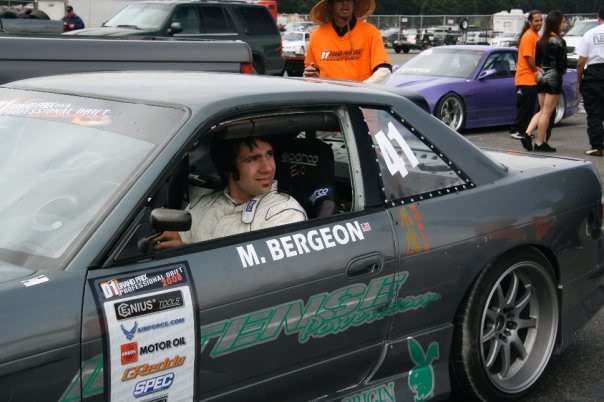 Marc remembers the next 15 minutes vividly: “When qualifying time came around, my two rear tires were on their last legs. I took a more conservative line so I had enough for competition. At this point, my knee swelled up the size of a golf ball. See, a week earlier, I’d had surgery to remove a pin in my left knee. 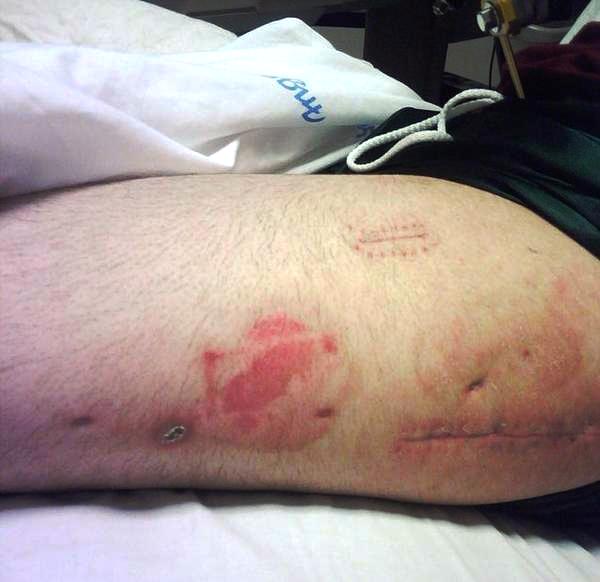 I had to be carried back to the truck after my qualifying attempt, and on my way, the D1GP announcer said I had placed 32nd in the top 32 out of 65 drivers. I couldn’t be happier – With a properly-running car and the right amount of power, I’d have placed in the top 16. All in all, this was one of the greatest days of my life!” 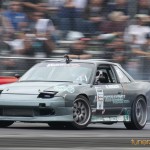 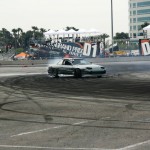 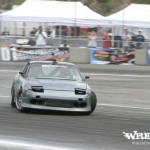 Marc told us, “I owe everything to my Mom, who helped above and beyond her abilities financially, and who believed in my recovery – She’s the reason I recovered as fast as I did! My close friends Chip Larsen, Nate Janusz and Krissy Lutrell helped me tremendously through these tough times.

Those of us in the local community watched Marc test the slowly-improving chassis at the 2012 Trial By Fire and Modified Tuner Shootout at Firebird. Fans of his progress were dissappointed when he hit the first corner – This was not a 400 horsepower car, and while Marc drove beautifully, he was once again embarrassed by his limited funds and equipment. “The hardest part has been trying to rebuild the savings I had built up for so many years and still to this day has not replenished at all”, says Marc. His goal now is to achieve the 450+ hp he’ll need in order to be competitive with this RB25-powered S13.

We’ll keep you guys posted on Marc’s progress. For now, he’s focusing on building the car to compete in the upcoming season, getting as much track time as possible, and networking with potential sponsors who are willing to throw their support behind a guy who knows what it’s like to face adversity. As a good friend of Marc’s for almost 10 years, I wouldn’t put it past him to achieve all of his goals and more….

Installing an FPR on SR20DET