Looks like I skipped a very important mod in Part IV, so I’ll tell you a little about that one here!

A little history first, if I may: The 240sx Convertible was built during a time when automakers were experimenting with door-mounted belts to meet Federal requirements for passive restraints. GM was the leader in this so-called “technology”.

The lap belt is secured to the lower door and the shoulder restraint is attached to the upper door. The design was such that the belt was intended to be left buckled at all times (as stated in the owner’s manual). Upon opening the door, both belts spooled out to allow entry and egress. 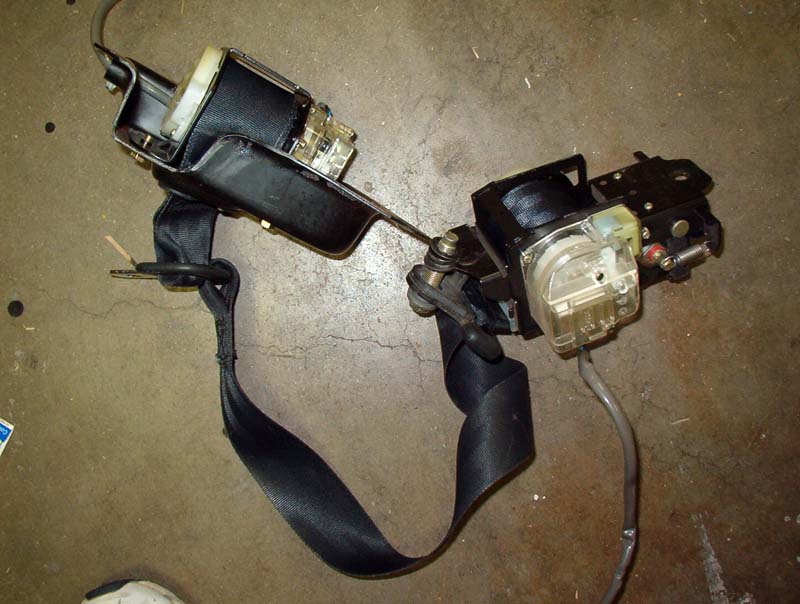 Door-mounted belts often contained excess slack and because they are loose they did not provided needed restraint. Another problem with the design of the door-mounted system is that if in an accident the door latch failed, (which can and does happen), then the occupant is no longer belted and is subject to ejection.Beyond that, the passive belt system on the 240sx Convertible, when modified by ASC, resulted in a couple additional problems:

One, the incredibly ugly door pillar.

Two, an enormously bulky door, nearly 30 pounds heavier than the coupe / hatch doors. These were designed NOT for added rigidity (as many erroneously believe), but to conceal the huge spools of belt required to span from the door to the latch when the door is opened. 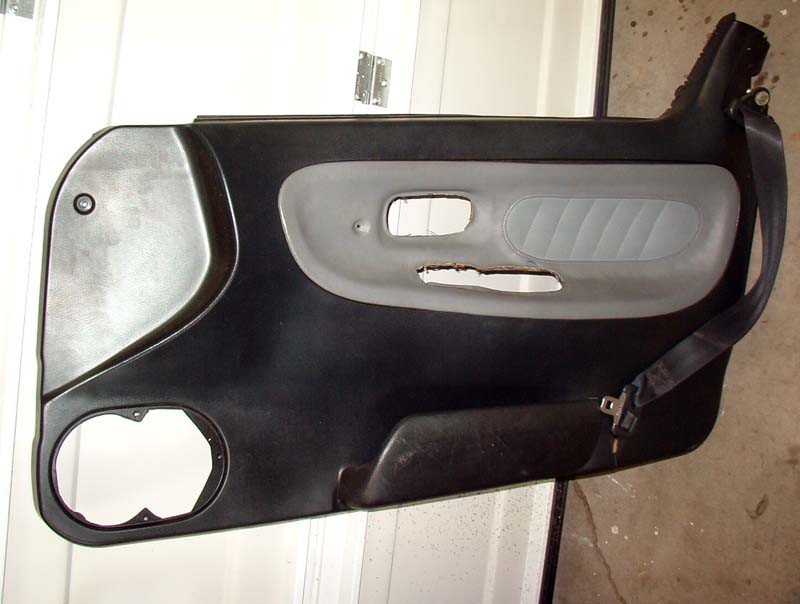 Three, a horribly-designed door panel, which ASC developed to conceal all of the bracing and spacing for the huge door-mounted seat belt spools. These were made of an inferior material and are prone to cracking.

Time to reverse-engineer the doors.

I did a complete writeup on doing a “pillarless door conversion” after quite a bit of research. I believe the first person to do such a conversion was one of our former Moderators, Demetrius (TrunkMonkey). Mine was (to my knowledge) the second such conversion.

To save some effort, you can use a set of coupe or hatch doors, and follow the instructions for seatbelt conversion in the article linked above.

At any rate, this began the revamping of the interior of Project Vert. The new door panels (sourced from a local coupe) made the seats and carpet look terrible, so those were discarded in favor of a new molded carpet and a set of black leather S14 seats. 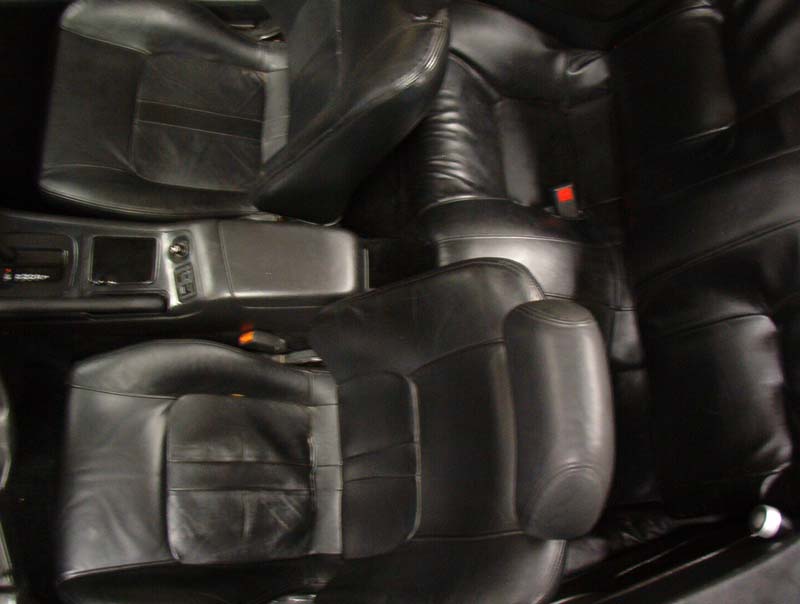 When I purchased the seats, from a pristine 1996 240sx, I secured both front and rear seats, thinking I could somehow modify them to work. While the fronts were a simple bolt-in affair, the rear seat presented quite a challenge. I don’t recommend it.The lower seat portion required some flexing and squeezing to fit, and the anchor points had to be redesigned. I had to remove some metal tabs behind the rear side panels to attain some additional width, as the S14 interior is wider.

The upper seat portion was a whole different story, as it bears NO resemblance to the convertible’s rear seat (which is quite a bit narrower). Basically, I gutted both seats, trimmed the S14 seatfoam, mounted it to the convertible seat frame, added some padding in the center, and wrapped the S14 seat leather around that. It’s a hog-ring and zip-tie job, and I’m not too happy with it, but it’ll get redone at some point. No one who’s seen it has complained. 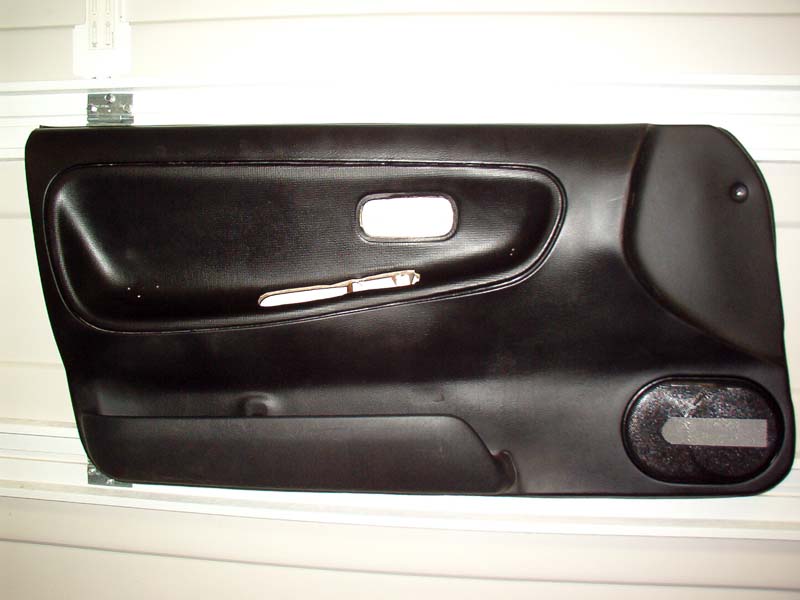 The new carpet arrived and got laid down, which was a relatively simple project. Nothing does more for your interior than a fresh new carpet, and this was a tremendous improvement.

I stripped the tweed covering off the door panels and glove box, removing the leftover adhesive with Goo-Gone, and gave them several treatments with 303 Protectant (best vinyl product on the market). The Convertible didn’t come with a grab handle on the passenger side, so I grabbed one from a junkyard and added it while I was redoing the doors.  The rear seat side panels had leather inserts that matched the factory seats (light grey), so those got a couple coats of black Leather Dye to match the S14 seats. 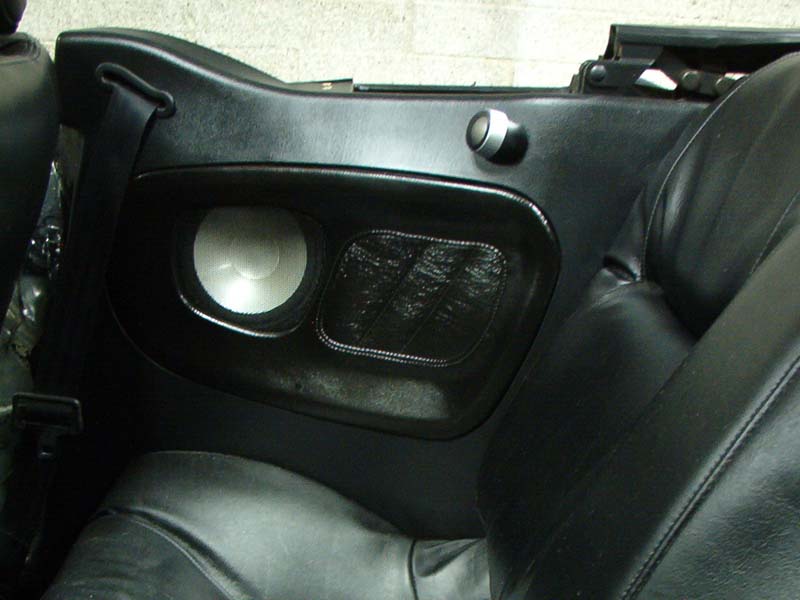 An S13 Silvia 3-spoke steering wheel was sourced off ebay for $20, and a black leather stitch-on cover from WheelSkins makes it look like it belongs there. 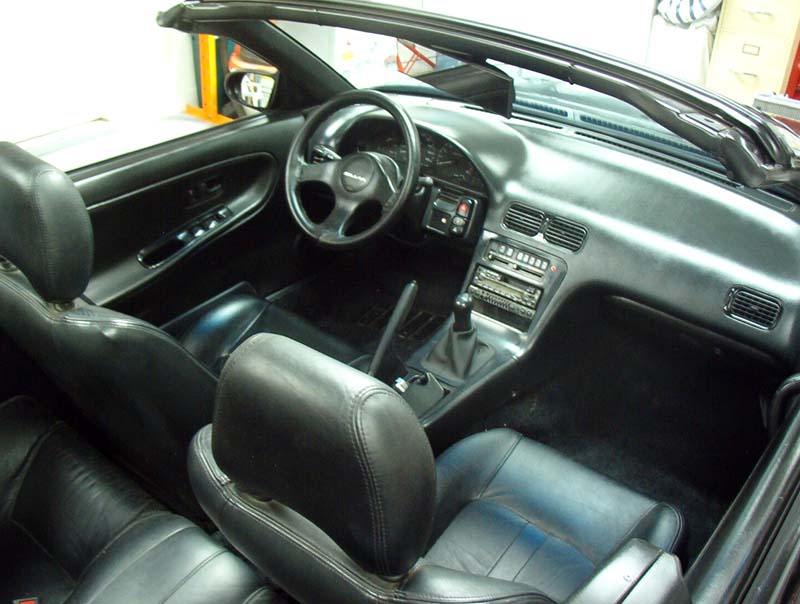 I’m still searching for a JDM console with an armrest (instead of the little console lid) – I think that will set off the interior nicely.