For me, this year’s NICOfest at Carlisle event was pretty special. After being on staff with NICO for an entire decade, I was finally going to meet a bunch of guys that I’ve considered family for the very first time, while getting to be part of my very first autocross event. It was a humbling experience. I have never been around a better group of people in my entire life. I’m not sure if this will make sense to those who read it, but the Carlisle Event is the personification of what NICO has always tried to be. A collection of great people, from all walks of life, getting together and doing something they love. So bare with me, as I attempt to describe the sheer awesomeness of my first NICOfest at Carlisle event. This article is best if read with a Boston accent! 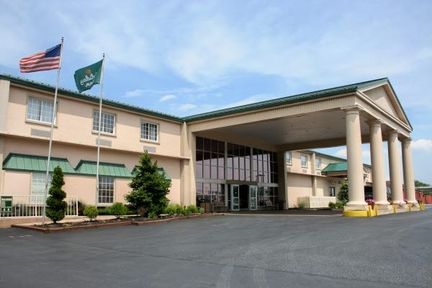 For some of us the event starts Thursday evening when we arrive at the Park Inn. I arrived around 15 minutes before Torry (EZCheeze15) and The Juke, which is amazing timing, considering Torry had just driven 19 hrs with a small nap in the middle, compared to my relatively short 2.5 hr jaunt. I came prepared with a cooler full of Corona, which we promptly started to consume. It should be noted the Corona was referred to as cat piss by Torry, but he drank it anyway. Apparently, anything other than Yuengling is unacceptable while attending the Carlisle event. As we discussed the drive over some cold beer, Joel (Bubba1) arrived in his track ready 350Z.  The 3 of us ate dinner at the hotel bar, enjoying great conversation about beer, women and cars. After dinner Slurski (Torry when drinking) strolls up and puts the moves on our hot waitress. It didn’t end well for him. 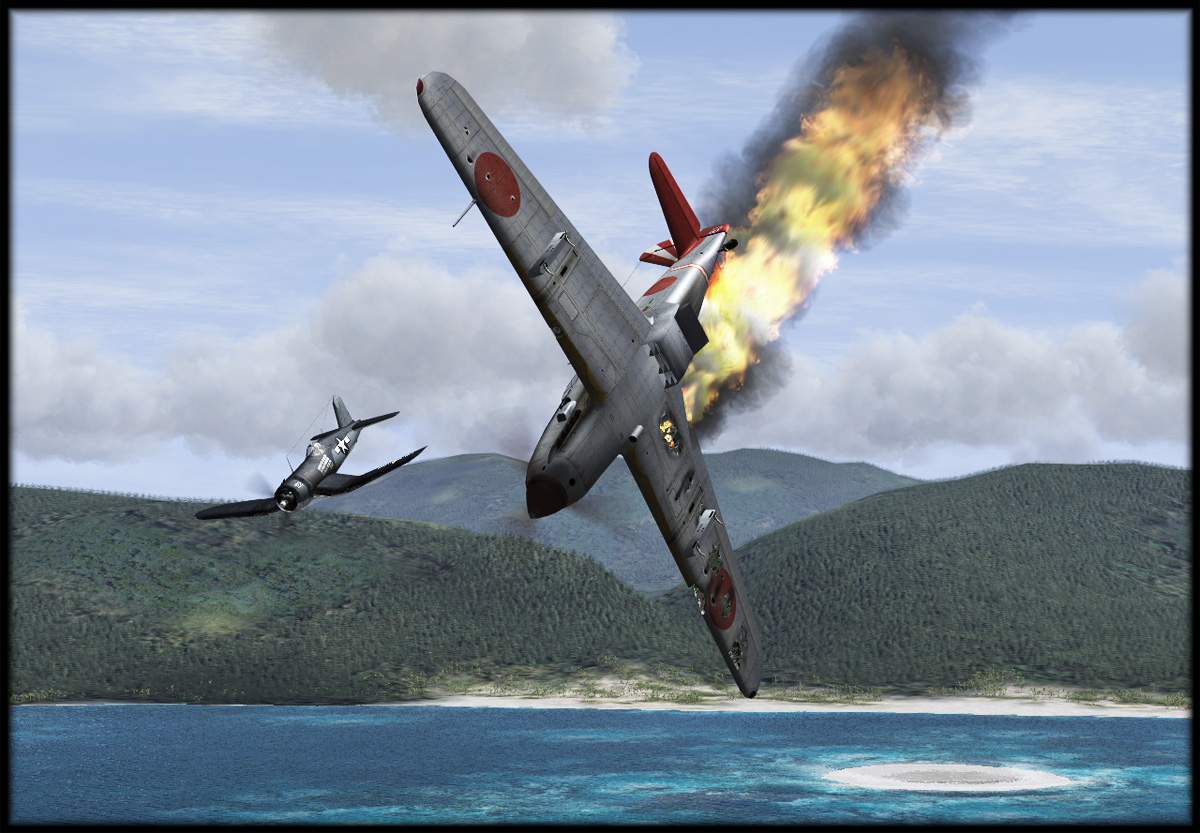 We migrated back to my room for more cat piss while we waited for James (PapaSmurf) and Ray (FrapJap) to show up. It was about this time that Torry started messing with James about having a “dumb phone”. Torry and I being app-happy “smaht phone” guys enjoy hassling James. They finally arrived at 1130,  and we promptly drank some more cat piss before we headed to the Hotel bar for a more acceptable beer. When in PA, you drink Yuengling, resistance is futile. Great conversation ensued until the bar closed at 0230. 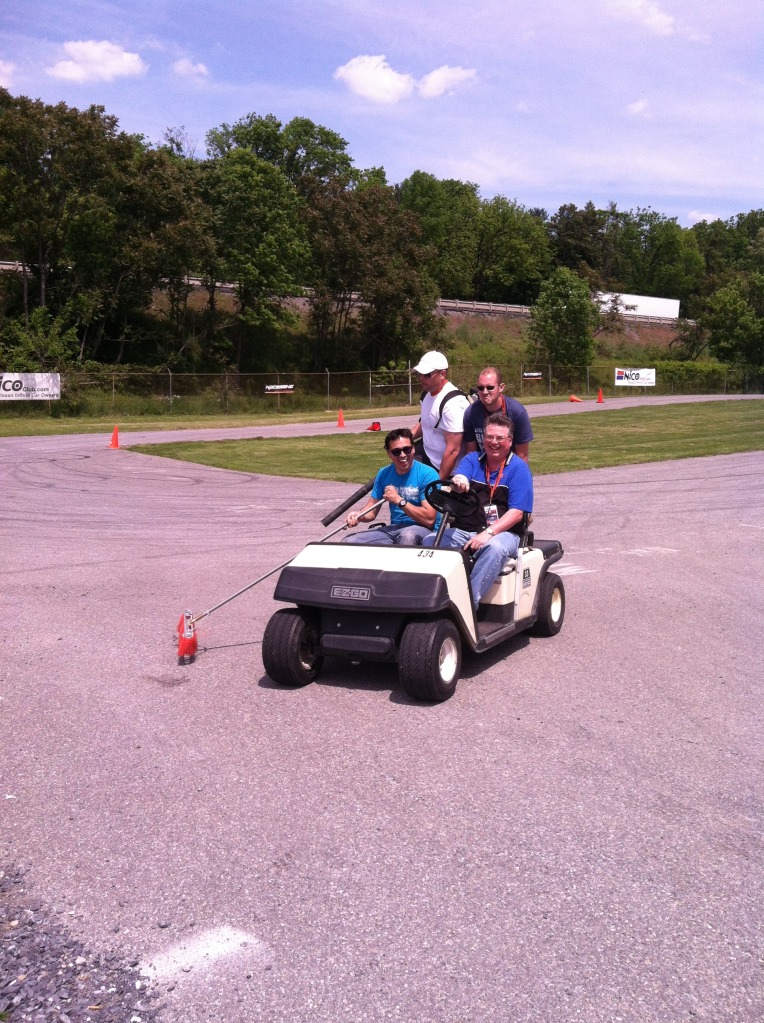 Friday starts at 0630 for a 0800 show time at the track, which Joel, Torry and I were the only ones to make. On the way to the track, and much to James enjoyment, Torry’s new HTC phone, the one with “the best camera on the planet”, (just ask him he’ll tell you), starts turning itself off. After awhile he couldn’t use it unless it was plugged in. Torry and I spent the morning with leaf blowers cleaning gravel and whatnot from the track, while Joel placed all the cones. NICO runs the track for the entire Carlisle event and there is a lot of prep that goes into a track day. This being my first Autocross, I learned a lot. From tech-inspecting cars to track design, NICO takes care of things in a professional manner. As Trackmaster, Joel designed the course, and was “The Man” when it came to any decision involving how the track was run for the entire event – and he did it with a well practiced ease that can only come with age and lots of experience.

After helping Joel set up the the track for the autocross on Saturday,  Torry, James, Ray and I met up for lunch as a prelude to our Yuengling Brewery Tour. Yuengling is America’s oldest brewery, what an awesome title. While on the tour, Jesda and his brother Jason appeared out of nowhere. Two very cool individuals that I finally got to meet. The tour itself was a great time and I recommend it to anyone that enjoys not only beer, but American history as well. Yuengling was around before prohibition and paid witness to the Government coming in and bricking up access to their fermentation caves.

As the tour was wrapping up, I get a call from Andy (Repoman). He’s about an hour out from the Park Inn and he’s going to grab a keg of Yuengling on the way in. I’ve been friends with Andy for over 10 years, yet we’ve never met. So I was pretty stoked about this evening’s festivities. However, before we made the trip back to the hotel, James wanted to do the Hershey Chocolate Factory Tour. Not a good time and is to be avoided at all costs, nuff said on that topic. I got the pleasure of riding in Ray’s Trans Am on the way back to the Park Inn. Nothing quite like a loud 3rd Gen with the T-Tops off, carving up the mountain roads of PA to bring a smile to your face. If you don’t enjoy such things, I feel sorry for you. 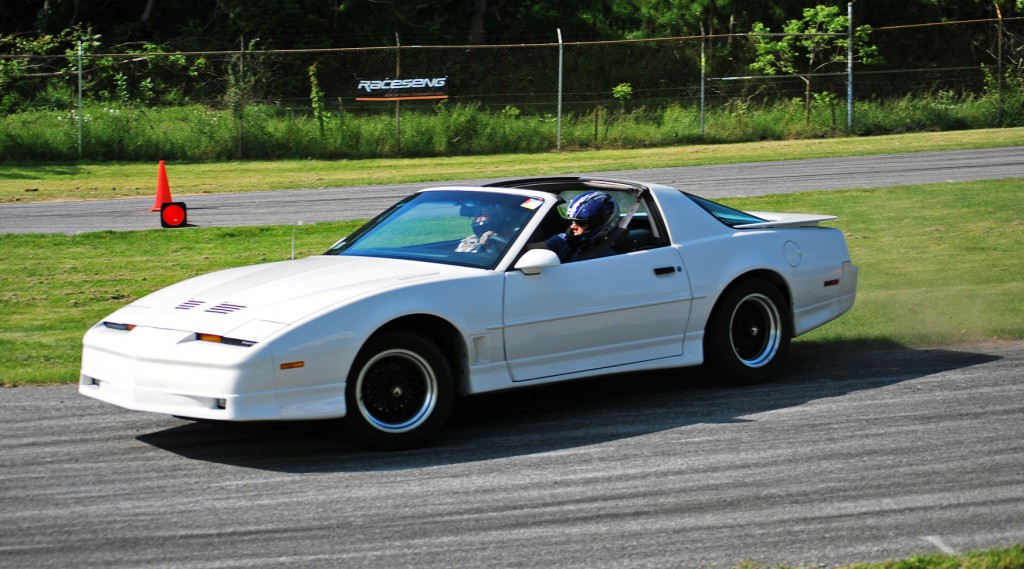 Friday evening is when 90% of the people show up at the Park Inn. By the time we made it back Andy already had the keg tapped and waiting. After a long 10 years, Andy and I were finally able to shake hands and have that beer we’ve always talked about, followed by many more. Meeting someone after “knowing” them online for so long time is a unique experience to say the least. Your mind fills in all the details you “think” you know about someone, and then you meet them. Being around Andy is like hanging around someone in the Secret Service (if the agent happened to know a crapload about cars.) Great to finally meet you brother!