Spending a while on the wiring and such gave us a chance to get the grease out from under our nails and gave the shop some time to air out (old Datsun fumes will be the death of me!)…

While all the wiring was going in, the L20b engine was up the road at my buddy Jason’s place, where he was going through it to make sure it’s ready for street duty. Meanwhile, the head was at the machine shop getting rebuilt with an Isky street cam, .020 overbore and oversized valves. Once the head was done, we mated the two and it came home, ready to join the Z 5-speed transmission.

Here’s the cam specs for the Isky cam:

I spent a good two days cleaning the transmission. Found one of those plastic “slabs” (they’re used under home A/C units), flipped it upside-down, worked perfect to allow the trans to stand on end and catch all the “funk” as I scrubbed the trans case. A half-bottle of Purple Power, a couple green scrubbies, and a roll of paper towels got it all shiny. A final bath with soap and water, followed by a couple coats of clear Krylon makes sure it doesn’t get nasty again for a long time. 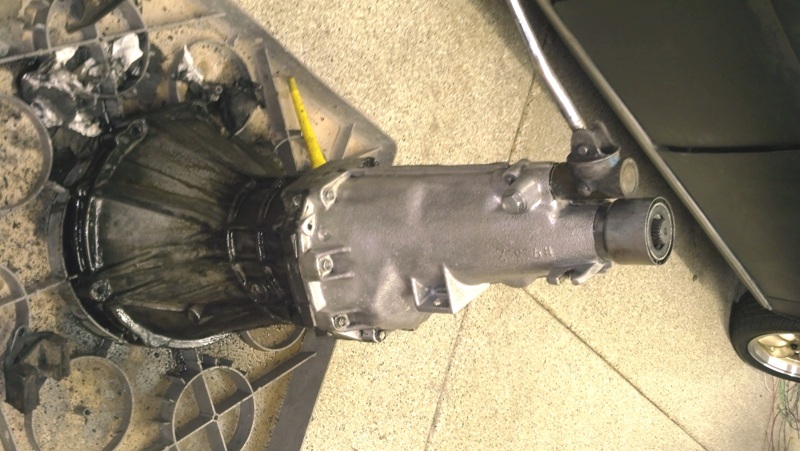 With the trans all cleaned up, and a fresh clutch, throwout bearing and resurfaced flywheel (all sourced from the pile of parts I bought early on in the build), it was time to mate the trans to the engine and drop it in. It’ll be nice to have the engine stand and trans out of the way, and free up some garage space! 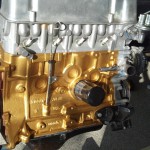 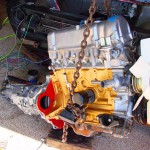 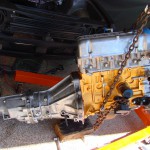 I usually don’t do engine pulls / drops by myself, as it’s always handy to have a spotter and an extra pair of hands to maneuver the engine in at the proper angle. However, since I didn’t have anyone around to assist, and I wanted it DONE, I devised a cool little tool – I have a push-button retractable ratchet strap that’s easy to operate with one hand. I used it to raise / level the tailshaft of the transmission. Once the transmission was situated over the engine bay, a light touch on the release and the ratchet strap slowly feeds out, lowering the tailshaft. Then, I placed one of my car wheel dollies (used for moving cars around the garage) under the trans tunnel. Once the tailshaft was in contact there, the trans was free to roll backwards as the engine slid into place (plus, it kept the engine / trans assembly level as I mounted it up). A fresh set of motor mounts, some new Grade 8 bolts, and she’s sitting in her new home.

Notice the “sacrificial” valve cover – The cover we’ll be using is being powdercoated, and you don’t want to run the risk of scratching it up during the engine install. This one was already pretty beat, so it served its purpose well. 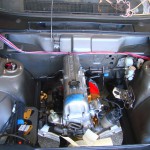 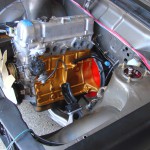 While the carbs are being built and the header is off being coated, we’ll shift our focus to some other areas, and we’ll come back to the engine later.

An issue that’s pretty common on old Datsuns, especially the 510’s and trucks, is the door hinges. After 45 years, these had worn somewhat, and a couple of the linkages to limit door travel had been damaged (likely due to lack of maintenance and lubrication). The assist spring was missing on the driver’s side front door as well. In these hinges, the pins don’t usually wear, but the plastic bushings Datsun used are notorious for drying out and cracking, allowing the door to sag or shift outward (away from the body). Fortunately, there’s a fix. Go to your local NAPA store and ask for part number 675-5157, which contains a pin and two bushings (you’ll need two packages for each door). They’re also available in the “HELP” section of most auto parts stores, under part number 38397.

You’ll need a helper for the rest of this project, so stop now if you’re by yourself. You can access the door hinge bolts with a socket and extension by removing the footwell kick panel. Removing the bolts in a staggered manner prevents the weight of the door from surprising your helper (who will already be cursing you for taking too long with the ratchet). Once the door is off, you can inspect and remove the hinge (the lower hinge is typically more problematic than the upper). Clean it up with solvent and inspect it for wear. If the riveted linkage is damaged or the holes are oval-shaped, it’s best to find a door hinge from a parts car (right and left are different).

First, let’s get that spring out. I’ve heard of several ways to remove it, none of which made much sense. I used a helper and two pairs of heavy-duty needle-nose pliers. Put the hinge in a good heavy vise, securely clamped. (Now is a good time to put your damn safety goggles on, by the way.) Each of you should grasp 2-3 coils of the spring and squeeze, which should make the spring compress enough to be removed. Set it aside, and turn the hinge so that the beveled (pointed) end of the pin faces up. Soak it in penetrating oil for a while, and drive the pin out with a suitable punch and a heavy mallet. I took the pin, chucked it up in my cordless drill, and spun it against some emery cloth or fine-grade sandpaper to polish off any corrosion. Coat it (I use Mobil 1 synthetic grease) and set it aside as well. Now, clean out any remnants of old bushing. NOTE – They’re almost impossible to see. I used a 3/8″ drill bit, liberally coated in lube, to bust up the old plastic. I also tested a torch on another hinge, and it discolored / shrank the hinge enough to make it more visible. Clean out the hole with a rolled-up piece of fine sandpaper, and use a cotton swab to put some synthetic grease in the hole. Next, insert the new bushings top and bottom. They should fit VERY tightly. I had to sand the bevel just a tiny amount to get them started, and a c-clamp finished off the job. Once the new bushings are in, reassemble the hinge with the pin, and put the spring back in (using the same method of removal – it’s helpful to have a third helper to wedge it into place with a screwdriver).

Here’s Betty, sans doors. By the way, this is a great time to clean up those door jambs, replace weatherstrip, and anything else that requires the doors to be… well, open. 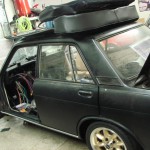 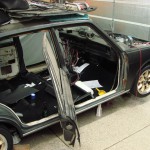 If you have a tap & die set, now is also a good time to chase the threads in the hinges. Also, do yourself a favor and go to a fastener store and get some new door hinge bolts – the originals may have some corrosion, and they’re NOT hard to snap off (they weren’t a high-grade bolt from the factory). Regardless, make sure you coat the threads with some anti-seize, and have your helper hold the door steady so you can bolt it up.

Here’s the end result – Fresh, smooth-operating door hinges, good for another 45 years of use. 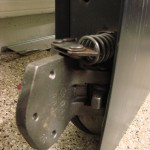 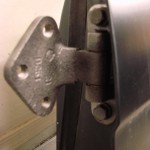 When re-hanging the doors, keep all the mounting bolts a turn shy of “snug” so you can adjust door alignment. Closing the door carefully will allow your helper to inspect the gaps all around the door. Inserting a nylon wedge or plastic pry bar, he can gently nudge the door to “square up” in the frame, and you can tighten down the bolts. Test closure by gently opening and closing the door a few times – It should act like a new car door. If not, adjust until you get it right (and don’t forget to clean and lubricate the latching mechanism, as well as the door internals while you’re at it).

While we were hanging the doors, I got a phone call from the chrome shop – Guess what came in? 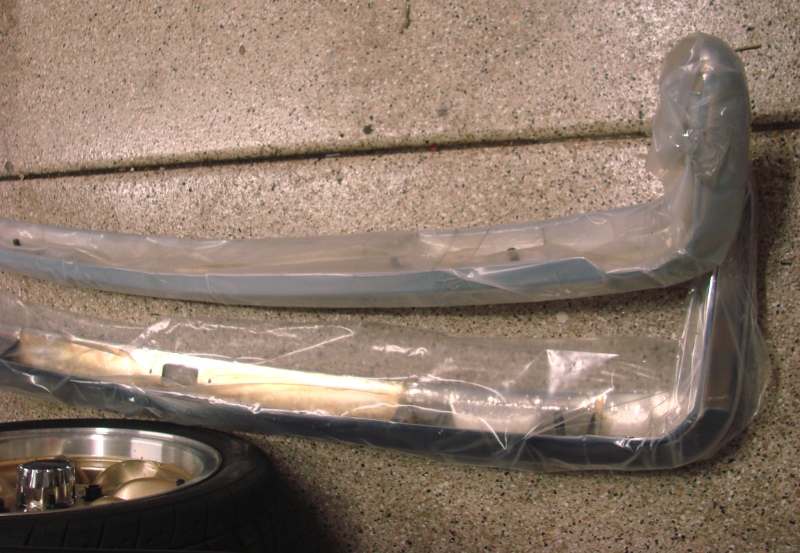 Freshly-rechromed front and rear bumpers! I had the shop fill the bumper overrider and bumper guard holes, and fill / smooth the front bumper seam for a clean look. The triple-plated chrome finish looks great, can’t wait to bolt them on!

Again, the bumper hardware had already gone through the tumbler / polisher, and I chased the body mount holes with a tap. A little painter’s tape to protect the fenders while aligning the bumpers, some anti-seize on the hardware, and a freshly-cleaned and painted set of bumper brackets finished off the job.

You’ll have to wait for pics of the bumpers until we get the lighting, grille and grille surround restored and in place (primarily because I forgot to take pictures of *just* the bumpers in place – Oops!)

In the next installment, we’ll install some weatherstrip, lighting, a new radiator and a few other odds and ends. The pile of parts is shrinking, and Betty’s starting to look more and more like a proper street 510!

Click here to read Part 7 of the Datsun 510 build!