Let’s keep it going – If we wait around on parts to fall outta the sky, we’re never gonna get this car on the road!

With the doors off earlier, it really exposed the need to address our weatherstrip issues. The 510 has its door weatherstrip ON the doors, unlike the Z (which has its weatherstrip on the body / door jamb). However, the 510 has a “finishing strip” on the door frame that secures the edges of the headliner, as well as the kickpanels, the B-pillar trim, and even the carpet. Ours was looking a little ratty, so it’s gotta come off. The project car had a box of fresh new weatherstrip in the trunk when I bought it, so that’s something we don’t need to buy.

After looking at the way the doors mate up to the door frames, I started thinking back to the Z restoration we did a couple years ago. On the Z, rather than using the stock-type weatherstrip, we used a bulb-type rubber. Basically, it’s a channel that fits onto the pinch weld of the door opening, and has a round tubular extrusion of rubber that faces the door. When the door closes, it presses against that cylindrical rubber, flattening it out and sealing the door. SOOO, what if we could use the same thing on the 510? I had some handy, so let’s give it a shot.

Here’s some pics of the weatherstrip going on. It really is nice stuff to work with, and I was eager to see how it would work for this application. 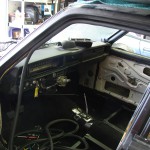 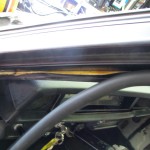 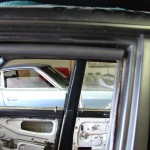 Now, a couple thoughts: After getting it all installed on all four doors, I realized – There’s no way to reinstall the door sill plates, since the rubber “bulb” would be in the way. However, they were pretty rough anyway (aren’t ALL 510 door sill plates pretty beat?), and it looked pretty nice without them. I also knew (from working on the Z) that the doors won’t want to close easily right away – but this was easily resolved by closing the doors with a little extra force and letting the car sit out in our 120-degree heat for a couple days.

Unfortunately, it doesn’t look like that’s going to be the case with Project 510. For starters, the weatherstripping is made to go straight. It’ll bend over a gentle radius, but unfortunately the upper rear corner of the rear door cutout is a little too sharp of a curve, and the weatherstrip wants to fall away from that corner after a couple days. The headliner encourages this as well, by pulling against the “clamping” force of the clip part of the weatherstrip. To add insult to injury, the doors never got to a point where they’d close fully, even after sitting in the heat for a week.

Well, part of the fun of trying new things is finding lots of different ways something WON’T work. So, I suppose I just saved someone out there a couple hundred dollars. I’ll pull off the evidence of my failed experiment, replace the trim with some OEM-style pieces, and go work on something else – we’ll come back later and install the OEM weatherstrip on the doors (where it belongs). Sound good?

Here’s something that DID work well, and it was a major victory for this project. You know the metal trim that runs along the lower edge of the door glass on each door, that has a rubber “squeegee” strip on it? Well, that piece keeps water from running down your side windows, into your doors, where it can cause all kinds of mayhem – Mold, rust, foul smells, ruined interior door panels, blown door speakers… However, most Datsuns have awful-looking window squeegies. We’re gonna fix that with a quickness. In doing so, we’ll also be able to address another problem – the stainless steel trim that the squeegies attach to had seen better days, AND it clashed with the satin black scheme of the car.

The rubber strip is flocked with felt on one side, and has a strip of metal or plastic where it attaches to the trim. The rubber was attached to the metal trim with industrial-strength staples, and there’s simply no way to replace these (which is why you rarely see them restored properly). Finding a stapler that’ll punch through stainless steel as well as the metal strip inside the rubber would be nigh impossible – but it has to do so without something to clamp against (otherwise, you’d simply crush the visible part of the trim). Time to put on the ol’ thinking cap.

Rivets? Nope. The “flush” side of the rivet would face outwards, which leaves the fat, ugly part of the rivet inside the trim (which would keep the trim from reattaching to the door). Wire? Not enough clamping strength, and it would allow the rubber to look wavy (and fail to seal out water). Adhesive? Hmmm – might work.

Here’s what I did: I took a Dremel tool with a cut-off wheel to each of the staples and removed the pieces. Then I removed what was left of the rubber trim – CRUNCHY! Then, I got a 18″ thick strip of aluminum stock and wedged it lightly into the trim (don’t want to spread out the internal clips that grip the sheetmetal at the top of the door). Then, using a small body hammer, I straightened out the deformations created by the factory staples. With a nice smooth surface to mount to, this just might work.

Here’s what the backside of the trim looks like (note the staple holes, the aluminum stock, and the painter’s tape holding it in place): 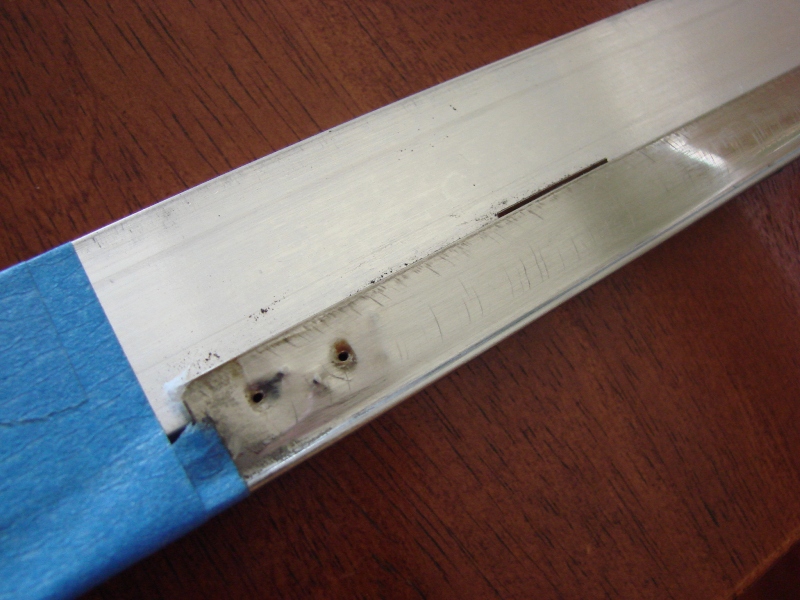 Next, I needed to determine where on the trim the rubber strip is supposed to go. I lined up the trim on the door, and marked where the rubber originally began and ended – this would help me determine how long to cut the rubber strips, AND where they’ll be placed on the metal. You don’t want to get this all done and realize your rubber squeegie is flopping over the door window frame, right?

The rubber strip can be cut with wire dikes (where the support piece goes through) and heavy scissors (on the flexible lip). The next steps, Becky actually allowed me to do in the house – Yay air conditioning! Next, I took some 600-grit sandpaper and roughed up the backside of the rubber strip (seen in the middle pic below) and the backside of the metal trim (big pic above), cleaned both with a little alcohol, and broke out the heavy artillery: Some E-6000 adhesive, a bunch of small C-clamps, more painter’s tape, and a chunk of EPDM rubber sheet, which I cut into squares to protect the shiny side of the trim from the clamps. 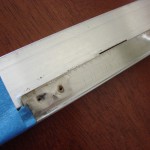 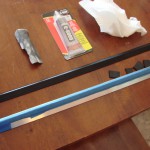 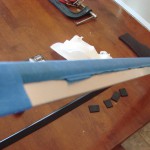 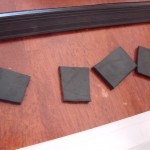 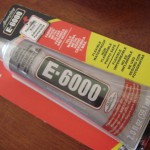 Fortunately, I had an extra piece of door trim and an extra length of rubber squeegie to test with. From that test, I learned a few things: E-6000 adhesive is some wicked stuff. It doesn’t expand (which is why I didn’t use Gorilla Glue), and it sticks like all hell. Also, I wound up not using the clamps – wooden spring-type clothespins worked better, and I could use as many of them as I wanted to hold the trim uniformly while it dried.

The next day, I tested the adhesion – perfect. These should hold up for several years of leak-free driving. Next up, I took the 600-grit paper to the shiny part of the trim (sorry, purists!) and roughed it up for three light coats of… truck bedliner! The texture is perfect, it’s got a nice matte finish that blends well with the rubber, and it looks really professional. Here’s the result (sorry, looks like black sticks): 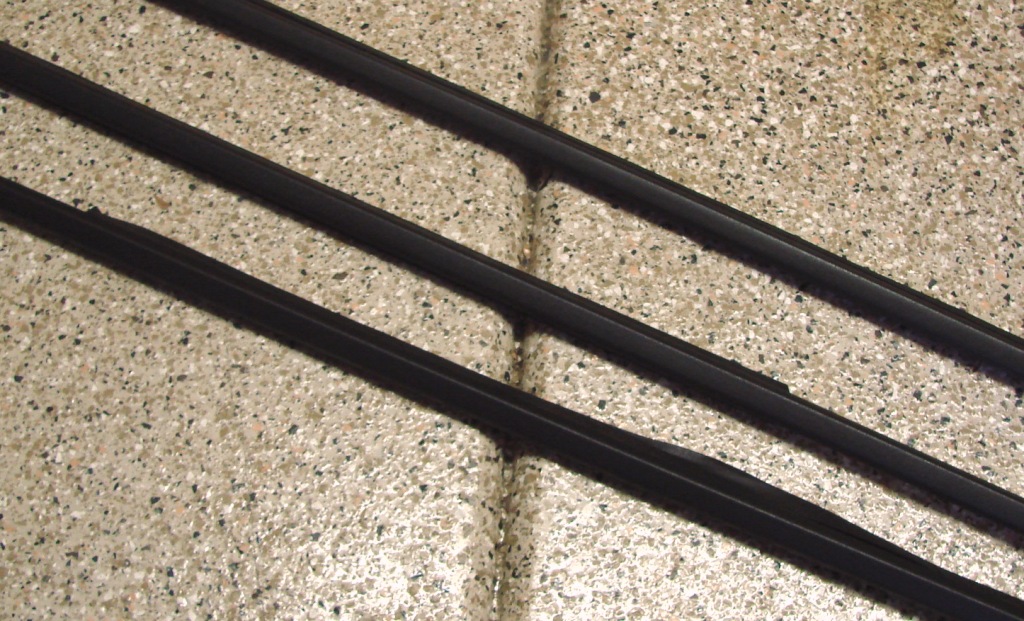 Later, I’ll post pics of how they look ON the car – I was very, very pleased, and the rubber fits perfectly against the window glass, forming a perfect seal to keep water and dirt out of the inside of the doors. WIN!

So, we’re 1 for 2 in this episode – Hopefully, the next time we get together in the garage, everything will work perfectly… yeah, right!

Speaking of “next time”, we picked up some interior goodies, more sound deadening, and Becky let me stay inside to restore some corner marker lights – we’ll get those installed next. Still waiting on that radiator…

Click here to read Part 8 of the Datsun 510 build!