With two big shows (JCCS and the Multi-State Datsun Classic in Williams) coming up on back-to-back weekends, some fine-tuning on the 510 and a few more updates were needed… Little stuff, such as adjusting the rear sway bar, replacing a fussy ignition switch, and replacing some dash cluster bulbs.

Time flies when you’re preparing for these events, and before we knew it, it was time to load up for JCCS. Because of California’s ridiculous laws affecting big rigs entering the state, most carriers have nearly DOUBLED their prices to transport cars into CA. If we were going to get four cars to JCCS, we’d have to handle this trip on our own. Fortunately, we have a truck and a trailer, and friends with trucks and trailers, so we would have three cars towed out, and Becky would drive the Z.

We left Thursday evening with the Bluebird, the 411 Wagon, and the Z, and our good friend James (greenblurr93) would leave Friday, towing the 510. The trip out was uneventful, but not for James – It seems the hood latch hardware loosened up during the drive, and the hood flipped up at freeway speed, bending it badly and damaging the cowl panel and hinges. Undeterred, he pulled the hood, threw it in his truck, and finished the trip. It’s a good thing we spent some time making the engine look good, because the 510 did the JCCS show hood-free. 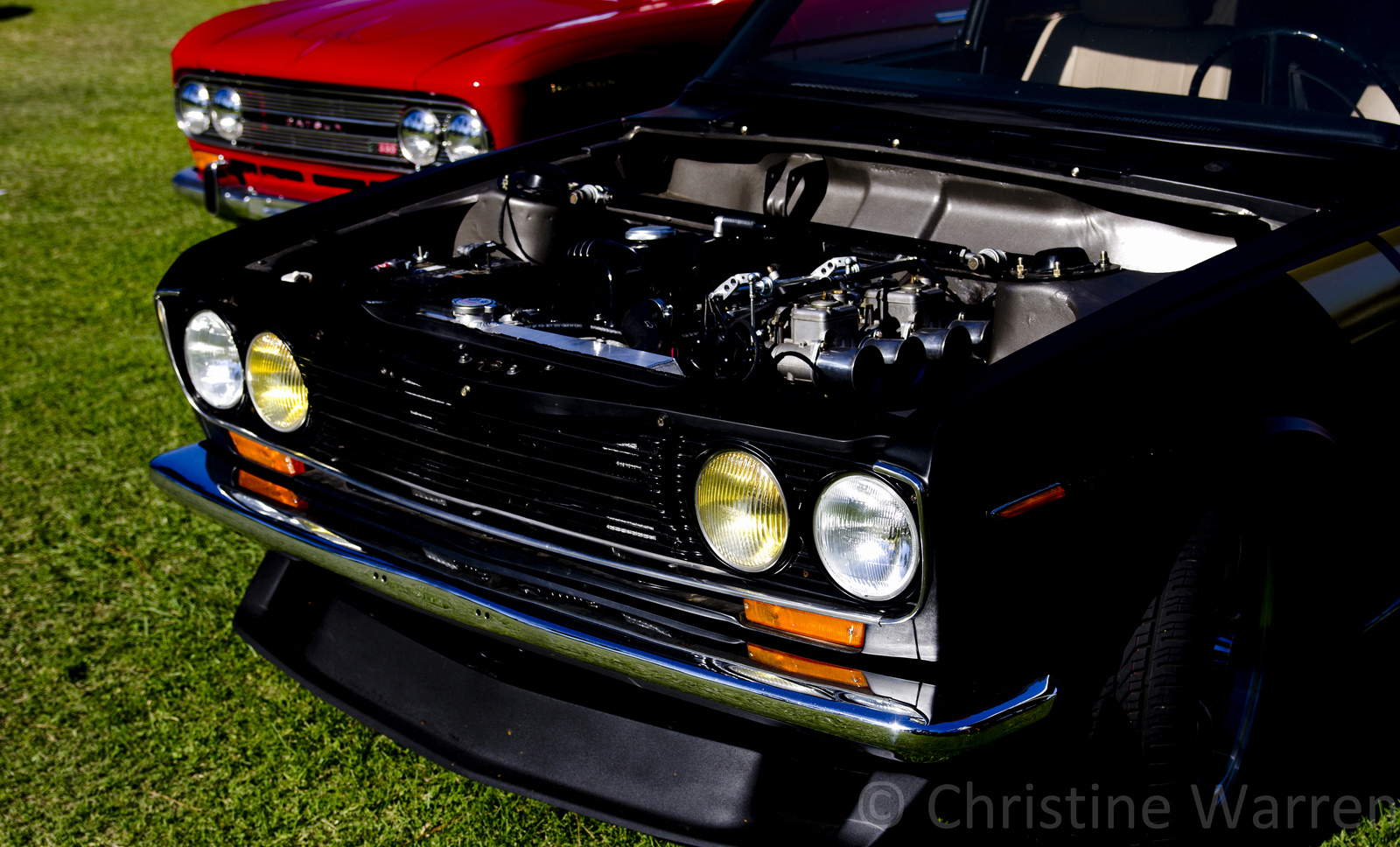 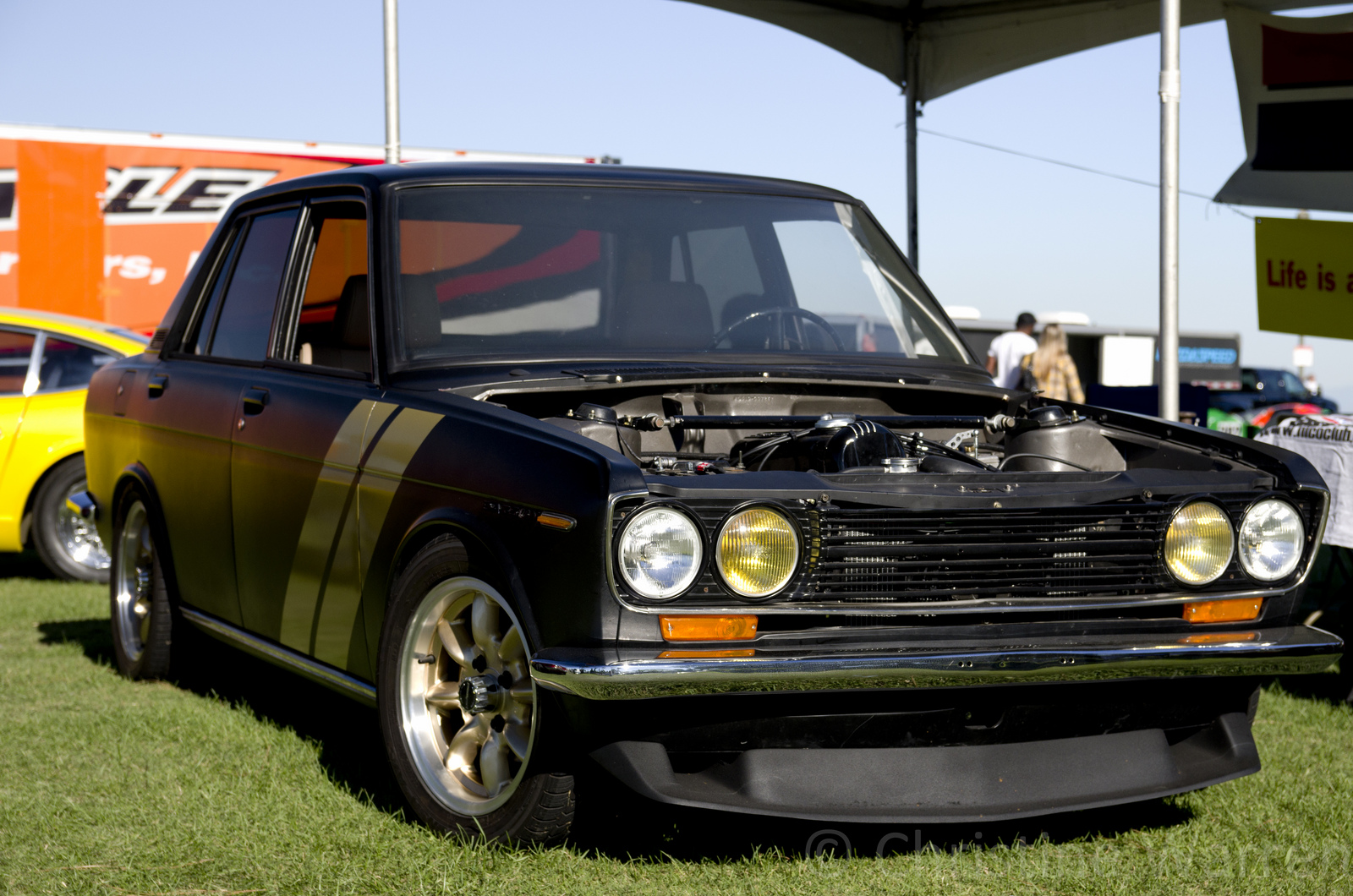 Special thanks to Christine Warren (skydragoness) for the amazing pics!

With no time to make repairs between the JCCS show and the event in Williams, all the cars got a quick once-over to make sure they were ready to make the trip. Our buddy ‘Doc’ would be driving the 510 to Williams, in a caravan with the 411 Wagon, the Roadster, the Z, and the Bluebird (on a trailer). 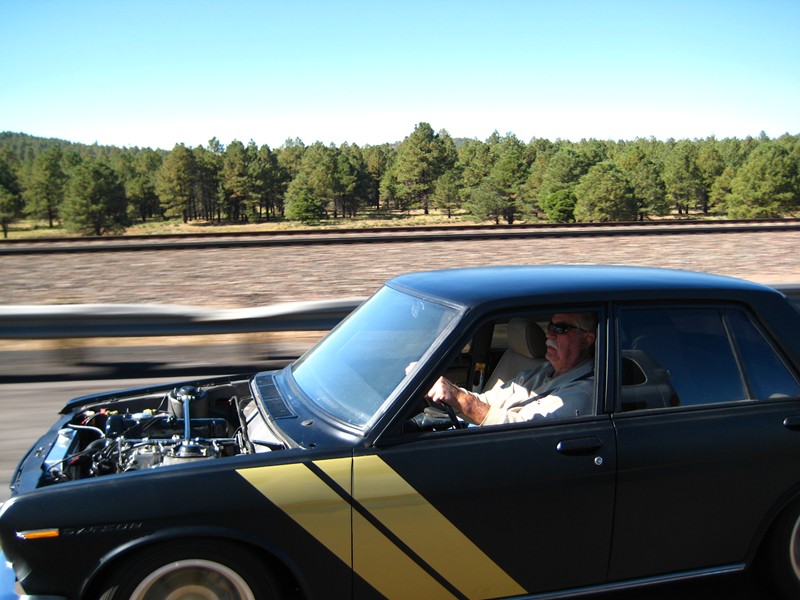 Williams is about 200 miles from NICO HQ, but with perfect weather and minimal traffic, it made for a spectacular drive. The 510 performed flawlessly, even though we went from 1000-ft elevation to over 7000 ft. The show was a success, and somehow she even brought home a 2nd-place trophy in the 510 class! 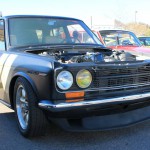 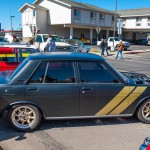 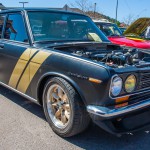 With the major shows for the season over, it was time to address a few of the issues we didn’t have time to handle. One of these, simple as it sounds, was the interior rear view mirror. Because the mirror housing is made of plastic, most 510 mirrors have deteriorated to the point that they no longer stay put on the ball mount. Some, like ours, had dry-rotted away to the point that nothing really held the glass in place!

The plastic isn’t really repairable in that condition, so I started searching for an alternative. Remembering that this is a ‘budget’ project, buying a reproduction or OEM mirror is out of the question. I ran across a replacement mirror assembly at AutoZone, that used a ball-mount just like the original 510, but it’s the kind that glues to the windshield glas. No thanks, I wanted it to mount to the step hanging from the windshield header. However, upon closer inspection, the ball on the modern mirror is bigger than the ball on the old 510 mirror mount.

A quick trip to see my good friend Hank at the Sun City Metal Club resulted in a fix: Despite the fact that Hank is 92 years young, he’s a lifelong machinist – and he drilled and tapped the new ball and the original mount, inserted a tiny threaded stud, and VOILA. A modern rear-view mirror, with dimming feature, that uses the original 510 mount.

Another of the nagging tasks was figuring out what to do about rear view mirrors for the 510. At present, it had no side mirrors. Nothing I looked at seemed to “fit” the theme of the car. I’m not a fan of fender mirrors for several reasons, and I wanted to make sure that whatever I chose, I’d be perfectly happy with. It’s pretty hard to bring myself to drill holes in the pristine sheetmetal!

The biggest issue, now, is what to do about the bent hood and the busted cowl panel. 1968 hood hinges are a one-year-only design, and early 510 hoods aren’t exactly easy to locate either. We spent some time thinking about a solution – Here’s what we came up with: Part 16 of Project 510!