2011 is an exciting year for Infiniti M enthusiasts as a new generation of Infiniti’s high-end sports sedan will come to market. In order to look to the future, we must first look at the M-series present and past.

Infiniti released the first M-series as a 2-door GT-styled luxury coupe in 1990 when Infiniti was launched for the US market. With lackluster performance due to its underpowered 162hp V6 and weight, even the release of a convertible could not help sales enough to keep the M30 in the Infiniti lineup and it was discontinued after the 1992 model year. The M30 shares nothing in common with later models M-designated models.

Fast forward to 2003 and Infiniti released an all new M for the US market, based upon the Nissan Gloria in Japan. This new model was released as a first generation sedan and included a 340hp 4.5L V8 with 5-speed automatic transmission in a FR layout. The first generation M45 was a love-hate relationship as you either appreciated the styling or simply walked away. Again, the M sold poorly in the US marketplace and was only in production for 18 months.

In 2005, Infiniti released the second generation of the M mid-sized sport sedan with all new styling, a more rigid platform and more options. The first release featured the M45 with the same 4.5L V8 (325hp) as the prior model but also included a new M35 model sporting the same 3.5L V6 as found in the Infiniti G35 and Nissan 350z (among others) with 303hp. The M also became the flagship of the Infiniti lineup as the Q45 was retired after 2006. Infiniti also released an all-wheel-drive model, the M35x, came standard with a variation of the ATTESSA-ETS (Advanced Total Traction Engineering System for All-Terrain system) system that had successfully been utilized by Nissan in cars such as the Skyline since 1989. In 2006, the M35x won Consumer Reports top luxury car pick, bumping the Lexus LS 430 from the top spot.

The M lineup received a mid-generation refresh in 2008 by offering the ATTESSA-ETS system with the V8 edition, with the release of the M45x. Sport versions of each were also released which added a stiffer suspension, rear active steer and additional interior and exterior styling. For 2009, the M35 was upgraded to the M37 and received the 3.7L 328hp V6, with 7sp automatic transmission, that was also powering the latest G and Nissan Z models. 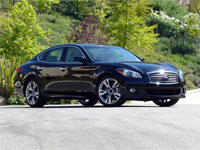 Model year 2011 brings us to the third-generation M, and a thorough redesign. From an exterior aspect, the new M takes a few styling cues from the Infiniti Essence concept vehicle. The new front fascia has a larger grille area, sweeping fenders, and G37-esque headlights which add to a more sculpted look than the M it replaces. The side profile also goes away from the prior generation’s flat-panel effect and continues the sweeping lines to give more style and definition to the vehicle. Gone also is the square rear of the current generation as this new design is in keeping with Infiniti’s new corporate design cues.

From a technological perspective, the Jury is still out. At a minimum, the M will offer a full Navigation system, Bose HD Musicbox with 5.1 sound and video capabilities, adaptive headlights, active cruise control, lane departure systems, and all the other bells and whistles seen in the current models offered by Infiniti. One new system that is rumored to be added is a blind spot monitoring system that will assist the driver if another vehicle is found to be in the blind spot during a lane change.

Performance: Infiniti will continue to offer the 3.7L 328hp V6 in base, AWD, and Sport editions similar to the current models on the market. The big change is the M45 is upgraded to the M56 and powered by a 5.6L V8 which is currently used in the Infiniti QX56, Nissan Armada, and Nissan Titan pickup. Power is expected to be in the 400-420hp range with an automatic transmission being standard. The M56 will be offered in similar Base, Sport and AWD configurations as the current generation. With the more powerful motor, Infiniti does not expect EPA MPG ratings to be any lower than the current 16 city, 21 highway.

Going Green In addition to the restyled M37 and M56, Infiniti will be releasing a hybrid version in 2011 as well. With the designation of M35 Hybrid, it will be offered with a single electric motor/twin clutch arrangement in conjunction with the naturally aspirated 3.5L V6. The electric motor helps with acceleration while also acting as a generator for the “laminated” lithium-ion (Li-ion) battery pack. MPG estimates have not been released at this time.

Infiniti is once again shaking up the mid-sized luxury sport segment, and enthusiasts are eagerly awaiting the outcome. To keep up with the latest M-series news and information, visit the following dedicated sites: