Ever since hot rodding began, the idea was to stuff a larger engine in a small chassis. The standard 411 was powered by a 1.3-liter engine. The SSS version of these cars was equipped with the 1.6-liter engine from the SPL311 Roadster. However, the base wagon body had to be modified by the factory so as to accept the type R roadster engine. The most prominent modification is a hole in the left front fender liner required to allow the exhaust to route out of the cramped engine bay. Here’s how it looked (NOTE: air cleaner removed in this pic, but you can see how little space there is on the driver’s side of the engine bay): 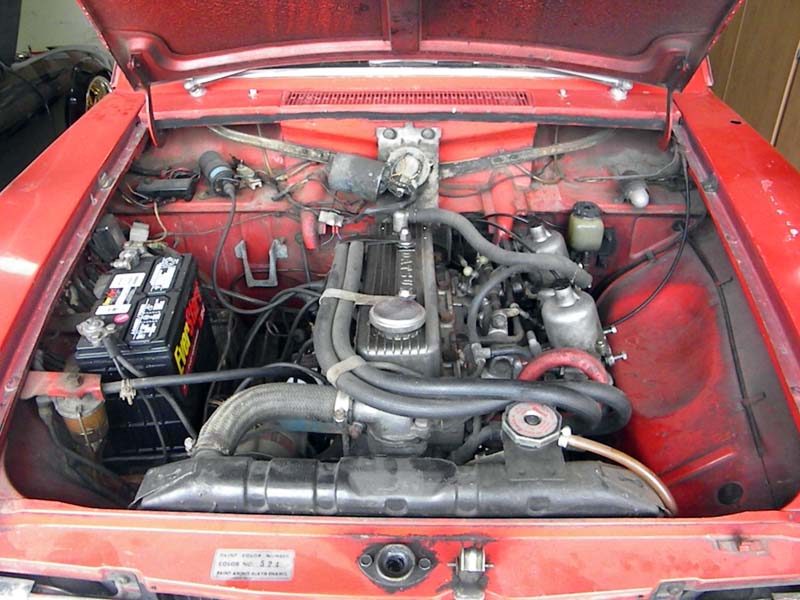 The cast iron exhaust manifold has a special extension bolted on which combines the 2 exhaust outlets into a single outlet and tilts it toward the new hole in the fender liner. The intake manifold is likewise tilted vertically to provide clearance for the SU air cleaner housing and the RL411 SU carburetors. Because of the tilt, the carbs’ fuel float bowl is tilted to the rear to keep the float level so that it doesn’t stick.

Of note: The majority of these cars had 4-speed manuals, and most were the non-SSS 1.3-liter version. Therefore, a SSS automatic in unmolested condition is a rare bird indeed. More than a few people have mentioned swapping in a manual, but that’s a foolish move – Some of its appeal is the old-school bulletproof Borg-Warner automatic. It’s a cruiser, and if we want to row gears, we have four other manual-trans Datsuns in the collection.

OK, back to the rescue effort. On the way out of Hollywood, we spotted the Peterson Museum and popped in for a visit. If you’re ever in southern California, I highly recommend a tour – there’s some amazing automotive exhibits and some one-of-a-kind displays on hand.

Heading across the California and Arizona desert at midday in early May is a questionable proposition without air conditioning, and even more so in a car that’s 43 years old. Hoping for the best, I checked the fluids at every stop, monitored the gauges, and crossed my fingers. She seemed to settle into a nice groove at around 70mph, so that’s where she stayed for the whole trip.

My partner in crime and fellow Datsun fanatic Jason (rotorimp) was following in the chase vehicle, and he made sure to inform me at every stop that she was running pig-rich… I didn’t need to hear it, I could SMELL it. He smelled like stale gasoline! Considering that the R16 engine only made 96 hp at the crank when brand new, and assuming drivetrain losses and 40+ years of wear, it’s pretty damn impressive that 40-something horsepower can effortlessly maintain freeway speeds. Definitely a testament to brilliant engineering from Datsun!

Here, in this picture, I’m refueling somewhere around the AZ border. Nothing too interesting about that, except that the fuel filler is located behind the license plate – but the plate won’t flip up or down! Quite a bit of searching revealed a small release button next to the hatch latch mechanism. Yes, you have to open the rear hatch to release the license plate latch, to access the fuel filler. That one almost stumped me. 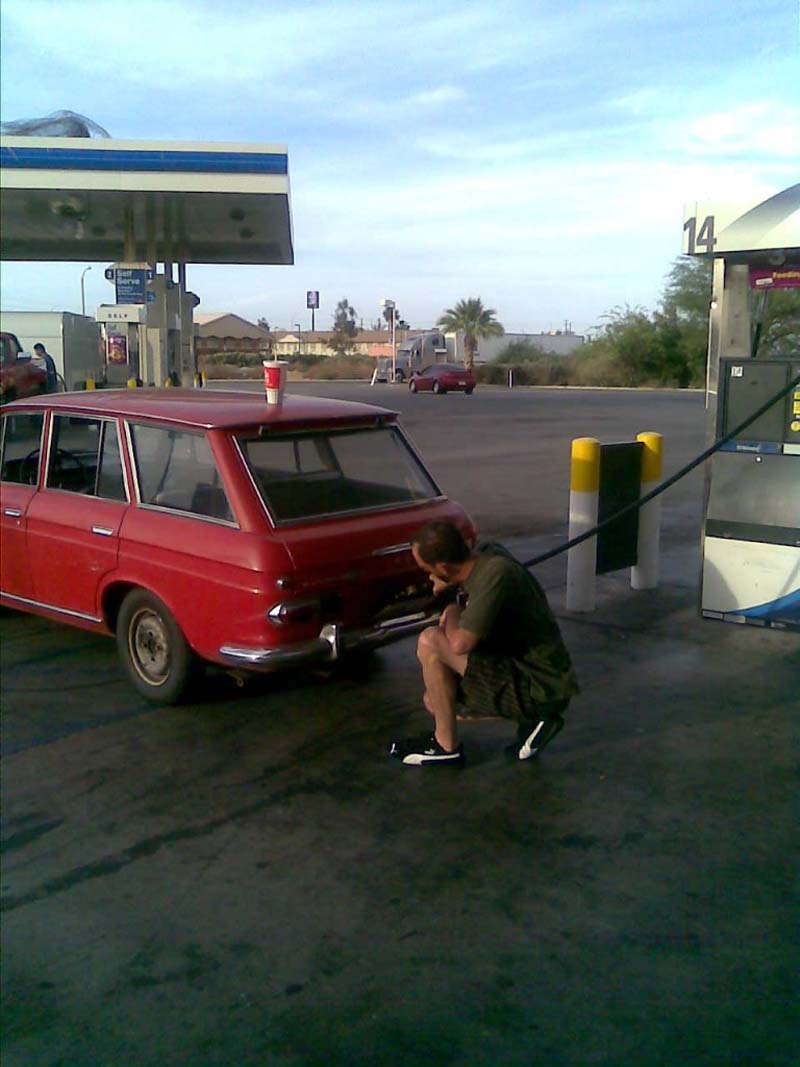 Letting my mind wander during the drive, I thought about plans for the wagon – what to repair first, which garage stall to put it in, what parts might cross-reference to it… and I remembered: She needed a name! All of our Datsuns have a name. For some reason, I kept thinking she should have a name that reflected her design and purpose… A plain, hardworking, domestic-type vehicle, probably originally intended for transporting kids and picking up groceries, she needed a name to match. I pictured the housekeeper from The Brady Bunch, what was her name? Oh yeah – Alice.

Perfect. Alice was on her way home.

Read more: Just a detail, right? And the restoration begins…