Welcome back! Hope you enjoyed the introduction to this build.

For the first several months, nothing was done on the Z. Life was hectic, and I had plenty on my plate. I’d been reading up on classic Z restorations, bought a few good books off ebay, and found a couple more at the library. The more I learned, the more I thought I’d like to do a full-scale restoration, while keeping budget in mind and not “over-restoring” it. I wanted a driver, not a concours-ready trailer queen. Besides, I *drive* my cars, so I don’t mind a rock chip or some road grime.

I’d seen the pictures of Mark Rolston’s gorgeous 240Z in Super Street, and it always seemed to me to be the “perfect” blend of performance and style for a classic Z… the color, the stance, the wheels, the body modifications – All of it. Of course, I’ve never been one to try and replicate someone else’s work, but it gave me some good ideas.

A few months later, I got motivated to get started. Off to Jason’s place, where we gave the car a more thorough inspection. The engine turned over by hand, so we hooked up a new battery, sprayed in some starting fluid, and hit the key… A sputter, a backfire, and a reluctant start… she actually ran for a few minutes! Encouraged by that, it was time to dig in. The first order of business was to remove all the trim, glass, interior, and non-essentials so that the bodywork could be done. Fortunately, it was pretty apparent that she’d never been in an accident, and the only repair to the body was a repaint of the right front wheel arch (for unknown reasons). 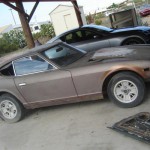 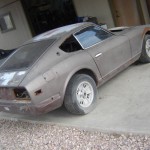 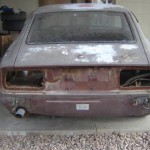 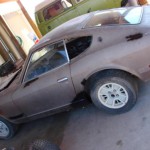 Remember how I said I didn’t want a car with any rust? Well, I should have known that ALL Datsuns have at least SOME rust, and she was no different. In fact, the paint on her “doglegs” (bottom front of the rear wheel arch) were hiding some pretty substantial corrosion. The more I ground away, the more it became apparent that there was going to be some serious cutting and welding going on. Fortunately, Jason is a whiz with a welder, so we grabbed a busted-up hood from an S13 an started cutting out metal to make patch panels with. A plasma cutter, a grinder, and a wire wheel saved us a ton of work. We spent a lot of time making cardboard templates for the patch panels, and while I cut, shaped and bent the patches, Jason was busy welding in the new metal. Extraneous holes were patched and filled, and leftover spray paint covered the raw metal until I could get it primered properly. The antenna hole, the side emblem holes, and the rear view mirror holes were deleted (I had planned to use fender mirrors – before I realized that they’re a colossal pain, and they’re virtually useless). 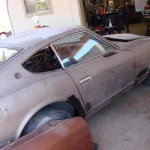 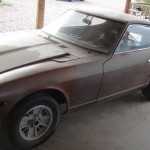 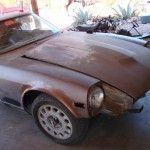 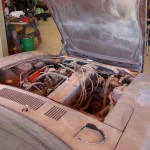 As we dug into the bodywork, we found one more area that was going to pose a problem. Seems the battery had leaked pretty badly somewhere along the line, and the battery tray and entire inner fenderwell were compromised. But, the worst damage was even further down, where the front tension rod meets the frame – the battery acid had run right into that seam, and both the tension rod mount and the frame were weakened by the corrosion. 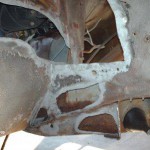 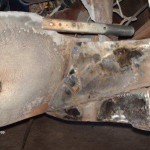 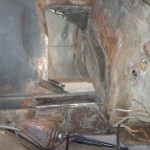 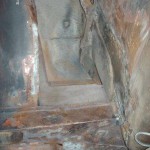 Jason tackled this part with a vengeance, since it’s a critical strength area. He cut out the battery tray, the inner fenderwell, and a section of the frame rail. He fabricated a fenderwell patch, an entirely new battery tray, and beefed up the frame rail while creating a new tension rod mount. Cross-measurements were taken to ensure the frame was square and true, and a set of come-alongs and turnbuckles were employed to make small adjustments while the bracing was welded in. Then, to make sure one side wasn’t stiffer than the other, he reinforced the driver’s side as well. At the time, it didn’t seem important – as the project progressed, it became critical. 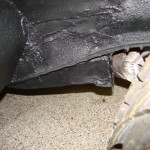 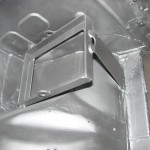 All of the rust areas that were repaired were treated to a coat of POR-15. And, since there was quite a bit left, I used it on areas that normally DO rust on a Z. A quick zap with a wire wheel, some sandpaper, and a wipedown with brake parts cleaner, followed by an application of POR-15, and we’d never have to worry about corrosion again. The entire undercarriage got a fresh coat of rubberized undercoating (I had already removed most of the original) – it was time to send her off for paint.

I told you this project was being done backwards!