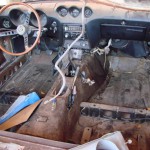 During this period of “down time”, I realized that I’d been putting off a pretty critical part of the restoration. And it’s an important part, but aside from paint and body work, it’s easily my least favorite part of the job. The interior. And this one was going to require a complete redo. The butterscotch color was all the rage in 1972, but it had to go. So, I reluctantly started digging in.

Now, don’t get me wrong – I’ve never avoided doing an interior restoration… but this was an early Z. While the engineers in Japan did a spectacular job on the body, the running gear, and the suspension, the interior of the S30 was an afterthought. As is the case with all my projects, the first thing I do is scrape and scrub the interior down to the metal. A wire cup brush on a cordless drill made short work of the glue residue that held down the old sound deadening. A quick wipedown with solvent gets the metal ready for new GT Mat sound deadening and heat shielding (amazing stuff – I use it on ALL my restorations). After the sound deadening was in, I bead-blasted the door sill plates. They’re aluminum, and had gotten pitted and stained. They’re hard to clean, and some people paint or polish them, but I think they look best in a clean, raw metal finish. Afterwards, I hit them with 3 coats of satin clear coat for protection. 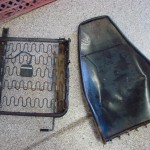 While getting up the nerve to tackle the interior, I decided to try my hand at restoring the seats. The original vinyl was cracked and torn, and the seat padding was dried out and deteriorating into dust. I had ordered a set of new vinyls and new padding, so I stripped off all the old vinyl and foam. I disassembled all of the latching and reclining mechanism, cleaned it, and had it powder-coated at a local shop.

Then I reassembled everything and installed the new vinyl. For those planning to try this, a couple tips I saw on a tv show really helped: The vinyl will be extra-tight, so you’ll want to set it out in the sun for a couple hours before trying to stretch it over the new foam. Also, it helps to put a really thin plastic bag over the foam, which will help the vinyl slide over the foam more easily. Lastly, it helps to turn the seatback vinyl inside-out before installing it, position it at the headrest, and roll it down over the seatback. Mine took a few tries, but I had the seats completed in a day… and, as luck would have it, the seat-rebuilding pictures were lost (along with several others from this build) when my PC died during the project.

As anyone who’s ever done an interior on an S30 knows, they didn’t have carpeting. The transmission tunnel is covered in a diamond-embossed vinyl, as are the rear fenderwells. Saying that it’s an extreme pain in the butt to replace is probably putting it mildly. The kit I bought looks great, but it simply doesn’t fit snugly, no matter how much heating, smoothing, and re-forming I did to it. It’s glued down, which is a challenge in the Arizona heat – automotive interior adhesives don’t hold up well to 200* temperatures!

Here’s a look at the sound deadening install, as well as a glimpse at the transmission tunnel vinyl: 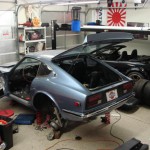 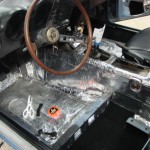 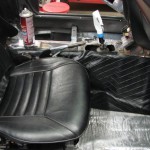 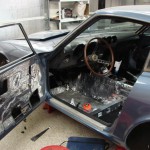 Something that became awfully obvious once I installed the seats – The floor and footwells of the passenger compartment are simply floor mats, laid right over the sound deadening – Datsun really didn’t put much effort into this. In fact, there’s nothing at all on the firewall, under the seats and behind them, unless you got it aftermarket… Once the seats are in, you could see the metal under the seat pan and behind the seat. So, I went out and bought some automotive carpet, made templates for all of those areas, and carpeted them. It’s not OEM, but it looks a lot nicer.

The window mechanisms and latching hardware had been removed for painting, so all that got bead-blasted, lubricated and reinstalled when I put the door glass back in. The inside of the door shells received a coat of rubberized undercoating. Then, the interior door metal (under the door panels) got a layer of sound deadening.

I found a set of nice used door panels on ebay, and traded some S-chassis parts for some of the other interior plastic. The plastic panels that cover the sides of the cargo area, as well as the pieces around the quarter windows, are incredibly hard to find in nice condition. The original butterscotch-colored ones were so brittle, they cracked and crumbled when I tried to remove them. It took a few weeks to scrounge up everything I needed, but seeing it all come together made up for some of the discouragement from the ill-fitting vinyl. Since she wouldn’t have a radio anytime soon, I found some material to make a blockoff plate, and made sure to cover the areas of the tunnel left exposed by the missing HVAC components. 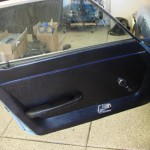 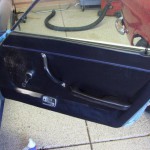 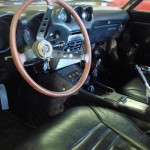 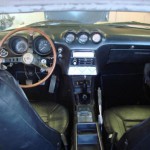 The door handles and escutcheons were treated to a good polishing on a buffing wheel, which brought back their shine, and it was time to wipe down the interior, treat everything with 303 Protectant (my favorite), and admire the completed interior… not bad for a low-budget restoration. We’ll have some additional “finished” pics of the interior towards the end of the build – Just when you think you’re almost done, there’s still a TON left to do!

Now that the interior’s [mostly] completed, we can move on to wrapping up all those pesky details…