About two weeks after getting the Z home from the paint shop, our family life changed significantly. The next three months was spent packing up our house and moving across town. The Z restoration was once again put on hold, and everything I’d removed and set aside was now being stuffed in boxes and bags, unlabeled, in order to relocate. I was positive I’d remember where I put everything.

While I was gaining a lot more space, I was also doing the ONE thing you’re NOT supposed to do in the middle of a restoration, and that’s move parts from where you initially put them. This lesson would become painfully obvious in the next two years, as I searched for certain parts to reassemble the car.

To make matters more chaotic, right before the move, I acquired another Z. Well, sort of. See, in doing my research on the restoration, I knew I’d want to upgrade the suspension and brakes. The only problem was that it would require sourcing a LOT of individual components, and doing more research to make sure everything would work well together. As is so often the case, I got a call from a buddy whose brother had started a project and abandoned it, and he thought it might be right up my alley. So, off I go across town to look at it. As it turned out, the guy had a ’73 Z that he’d started a Velo Rossa conversion on… For those of you unfamiliar with this, a Velo Rossa is a fiberglass re-body kit for the first generation (S30) Datsun Z car. The kit is loosely based on Ferrari’s famed 250GTO from the early 60’s.

The owner had started off right: Brake upgrades were installed front and rear (Toyota 4×4 calipers and discs in front, Maxima calipers and discs in the rear), higher-rate lowering springs, a larger master cylinder and brake booster, a nice Wilwood brake proportioning valve, KYB shocks, bumpsteer spacers, reinforced lower control arms, heavier sway bars and brackets, polyurethane bushings. He’d already done some extra work in laying the foundation for the car, and had over $4000 in receipts for his troubles. He’d also made some progress on reinforcing the chassis after cutting the top and rear hatch area off (in preparation for attaching the Velo Rossa fiberglass body panels). He soon realized, however, that he’d gotten in WAY over his head (the rest of the kit isn’t cheap), and that doesn’t even take into account all the other Z-specific restoration stuff he still had to buy. With an impending tab upwards of $20,000 staring him in the face, the financial commitment and pressure from his spouse was too much.

After talking in the driveway for nearly two hours, we weren’t getting anywhere. Negotiations over price had reached a standstill (he was convinced he had installed a rare VLSD, valued at over $1000 – I politely disagreed). He was certain the lack of a clear title wouldn’t be an issue, I knew better. Fortunately, his wife joined the discussion as I was about to leave and made up his mind for him – Take my offer of $500 and get it out of HER garage. Ouch.

Not one to stick around for the inevitable domestic violence, I paid the cash (to her), gathered the shell and began the long, dangerous tow home (65 miles with a tow bar and steering linkage held together with a ratchet strap was NOT one of my brighter moves).

The next morning, I evaluated my haul – Overall, it was well worth the price paid. 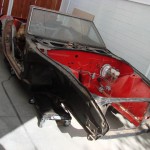 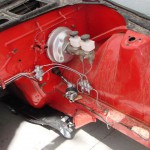 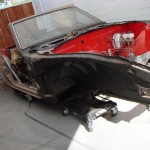 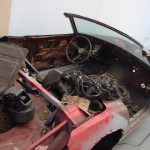