With a half-day of garage time available one weekend, I got started on restoring the steering wheel. The S30 had a wood-look wheel that was actually a grained plastic of some sort… it’s pretty convincing. I started with a light sanding with 400-grit, which really brings out the original color and variations. NOTE: You don’t want to sand too far, because the underlying layers are different colors – just take off the layer of wear and finish it off. I took it down to an 800-grit, masked off the spokes, and sprayed the rim with a satin clear coat. After that cured, I masked off the rim, sanded the spokes, and resprayed those in a semi-gloss black paint, just like original.

With everything buttoned up, it was time for the Z to take her maiden voyage. Let’s ignore the fact that for an engagement gift, it was a year late… So on SuperBowl Sunday, Becky got the keys to Bella and took her for her first drive. Her expression was priceless, and despite the fact that NOTHING had been “sorted” on the car, she was as excited as could be… Never mind the fact that it was built by a couple knuckleheads in a garage, she romped on the throttle and made sure all the neighbors heard it – and the sound of that RB under load through a 3″ dump is simply amazing. 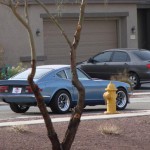 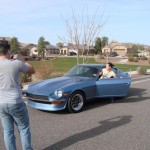 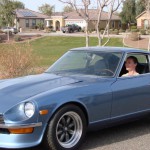 I think she likes it.

Side note: Speaking of “sorting”, this is kind of an archaic term you’ll hear tossed about by restorers and hot rod builders. Simply put, it means the process of making a newly-built car driveable. Even a well-planned project will have bugs and kinks that won’t reveal themselves until that first drive. It’s important when sorting a vehicle that you take a passenger along with a pad and pen (or a digital voice recorder) to jot down all of your impressions. For example, Becky noticed several things that needed to be addressed: The brakes are overly touchy and engage too high in the pedal travel. Similarly, the clutch engages too early in pedal travel as well. The rear end squats on moderate acceleration, rubbing the rear tires on the fenders. The front tires scrub the air dam on sharp turns, and the seat belt buzzer decided to magically “re-connect” itself halfway through the shakedown run… and, as you heard her mention, it acted like it wanted to die out a couple times. All things that could be addressed.

As much fun as the 3″ open dump downpipe was, it’s pretty uncivilized under load and at high rpm’s. Not to mention, it hung dangerously close to the ground (as Becky found on her shakedown run). It was time to give the exhaust the attention it deserved. Once again, we enlisted the services of Jason and his Master Fabricator skills. Lengthy discussions ensued, however. See, the S30 chassis doesn’t exactly lend itself to an easy exhaust configuration, especially after you hog up the transmission tunnel area with a larger transmission. Yes, there have been a lot of RB swaps into the early Z, but there’s not a simple, universally-accepted “best way” to route the exhaust. Complicating matters further was the fact that this car sits relatively close to the ground, and we wanted to avoid scraping over speed bumps and driveway entrances.

This left us few options… split the 3″ downpipe into a pair of 2″ pipes? Cool, but a lot of work and unnecessary expense. Keep it 3″ all the way to the bumper? Simpler, but ground clearance would be problematic. How about oval piping? Slick, but expensive, and the transitions are a fabrication nightmare.

We learned from the KA-T build on the Droptop From Hell that a small-displacement turbo engine doesn’t always need 3″ pipe – it performs quite nicely with a straight, free-flowing mandrel-bent 2.5″ system. So, we decided to transition the 3″ downpipe into a 2.5″ system that hugs the underbody closely, and finished it off with a Magnaflow straight-through muffler. We turned the muffler up on its side, just like the OEM system, powdercoated it black, and polished the 3″ tip to a high gloss. So, yeah – it looks awesome… but how does it sound? I can tell you this – it’s easily my favorite-sounding car in our fleet. It’s VERY quiet at idle, smoother and quieter than our Frontier in fact. Under load, at full throttle, it sounds… well, it sounds like an R33. Absolutely gorgeous.

While we set about the task of sorting out all the little issues, there was still something missing. Any guesses?

Join us for Part 15, and we’ll show you the “finished product”: Becky’s 240Z is finally finished.