On our way to CA, Greg gets a call from Aaron. The 510 is acting up. He had to change the alternator, the battery boiled over, it has no headlights, no mirrors, no seatbelts, and the synchros in the tranny are SHAGGED. He also can’t get much above 60 mph. Greg tells him to do the best he can, be safe, rest assured, the calvary is on the way. So we press on through the desert to get to our first destination.

Kevin, the Datsun motor builder, is an awesome guy. He has the fever, just like we all do, except he is primarily into the Roadsters. His specialty is building stroker motors out of the R16’s and swapping SR20’s into Roadsters. He showed us his gorgeous 2000 Roadster, assured us that our motors would be done soon, and we were on our way.

Next stop, the UHaul dealership. First of all, they sent us to the wrong address so we had to derail our plans and change course. I was irritated but did my best not to take it out on the girl behind the counter. She wasn’t the one that made my reservation so I was polite and bit my tongue. Flying off the handle wasn’t going to help anything anyway… we’re both irritable already from the constant rain, ever since we left Arizona.

When we go to pick up the 411, we find out that we have ANOTHER wrong address! Once we get that straightened out, find the right location, and get the 411 loaded onto the trailer, we get another call from Aaron. He is still 400 miles away and daylight is fading fast. We ask him for ideas on where we could unload the 411 so we could bring the trailer to come pick him up.

Here’s Jason’s 411 – He’s been coveting ours since we got it, so we found him one. His is identical to ours, except it’s a manual trans car. Should be a fun project! 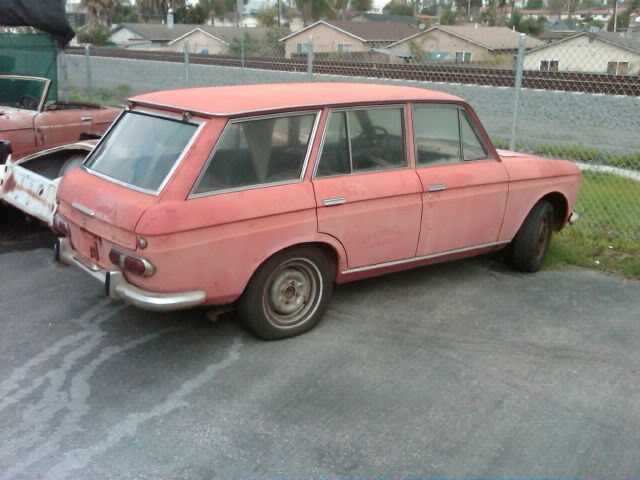 Aaron calls his boss who says it is OK for us to drop off the 411 at his shop and leave it overnight so we can go rescue Aaron and the Dime, and come back the next day.

We drop off the car, hang out with his boss for a few minutes (that’s another cool story I’ll tell later), and head north to intercept Aaron. By this time, it is waaay DARK. Aaron has pulled off the road at a Taco Bell about an hour north of Vista. We go pick him up and I felt so sorry for him. He looked completely worn out. He is cool, calm, and collected but I’m pretty sure at this point he could have lit a match and thrown it in the gas tank without thinking twice.

We get something to eat, load up the Dime, and head for Vista. We drop Aaron off at his place and head to the hotel. When we get out of the truck, we finally get a chance to relax and take a good look at our newest acquisition… we walked all around it, admiring how beautiful she was and thanking God that she didn’t get Aaron killed. We also wondered how the trip the following day was gonna pan out, and if we were going to have to alter our plans for the trip home. 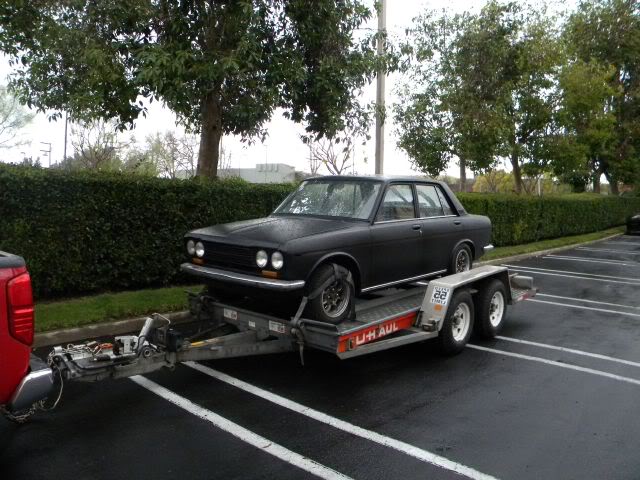 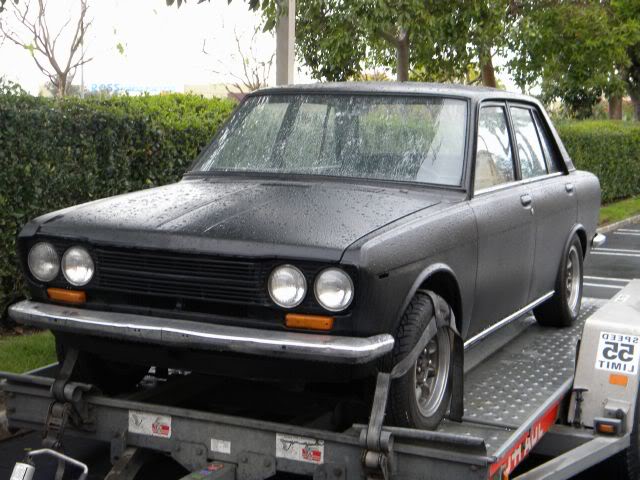 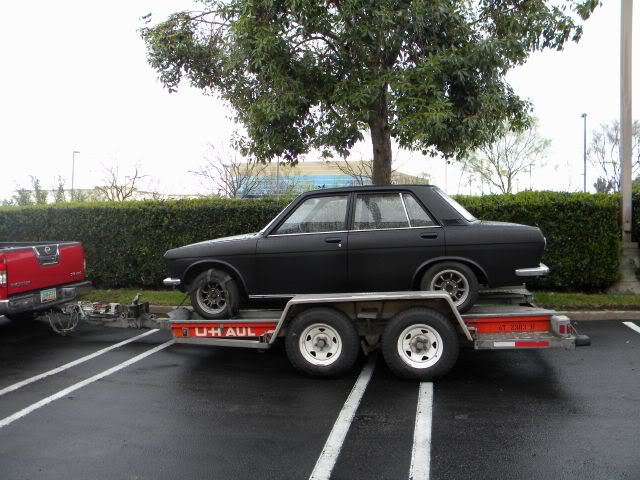 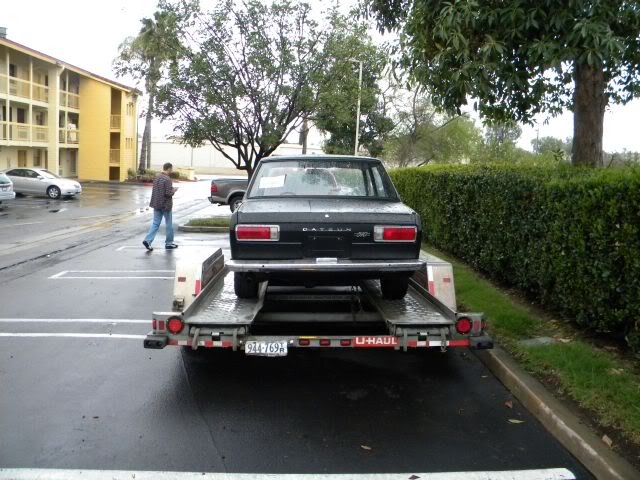 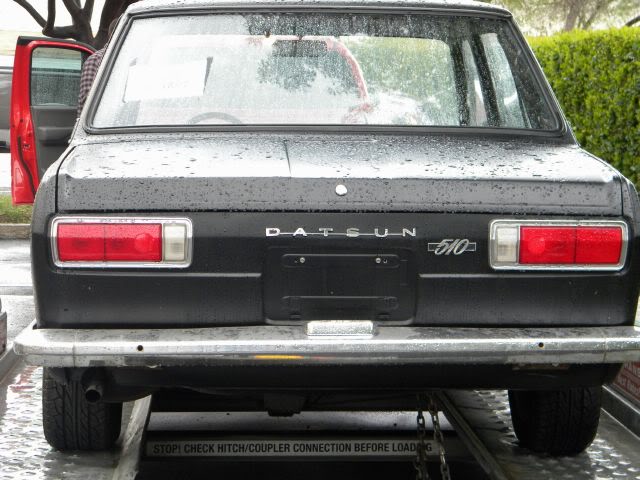 We meet Aaron for breakfast early, and head out to the shop.

So, here’s the highlight of the trip: Aaron’s boss that we mentioned? It’s LES CANNADAY, a name well-known to any Datsun aficianado. Yep, THE Les Cannaday of Classic Datsun fame. He let us rummage through his shop, take pictures of his projects, and wander through all of the cool Datsun memorabilia he has. That’s an article all to itself, but I just had to mention it here. He had a part we needed for the Dime and also a part for the 411 (that no one else in the continental US seems to have) so that was really awesome.

While I’m taking tons of pictures of everything in the shop, Aaron and Greg are working on the Dime. Aaron adjusts the floats on the carb, swaps the shagged radiator, and replaces the thermostat. Somehow, some way, a previous owner decided the little ridge in the water neck wasn’t a good enough perch for the thermostat – it had to be mashed up INTO the housing! That thing was so horribly warped and mangled that Les asked if he could keep it and put it up on his wall as a souvenir. Check out THIS carnage! 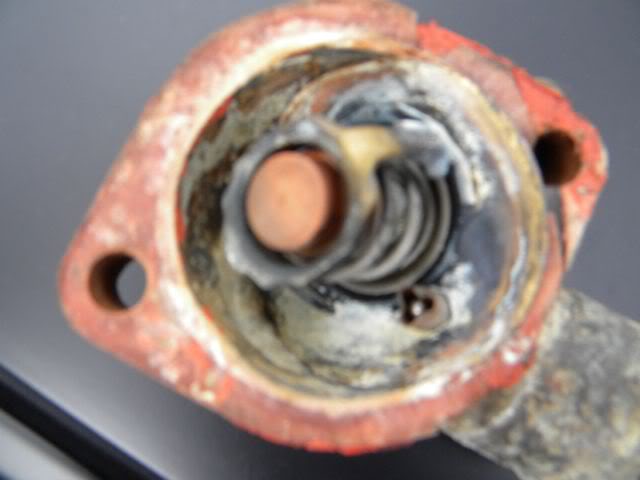 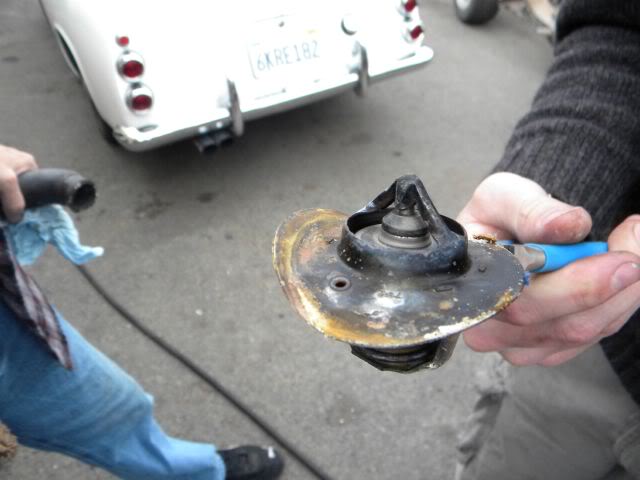 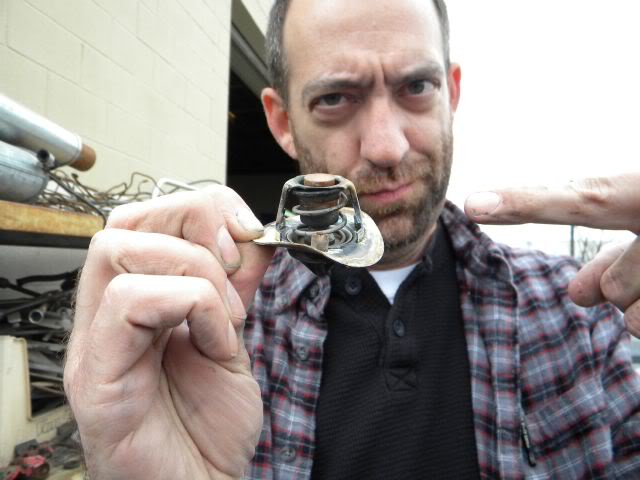 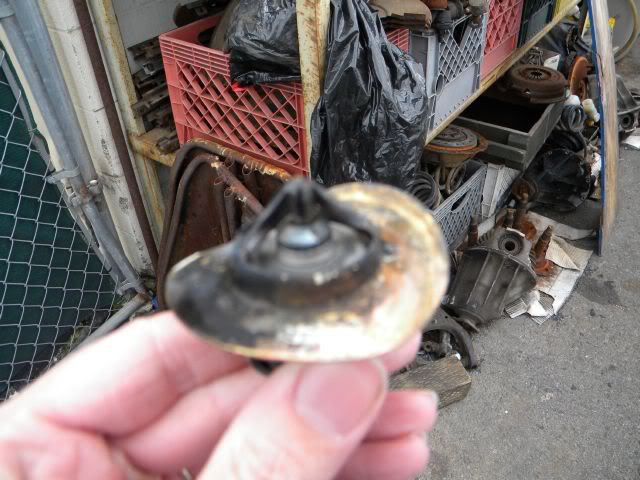 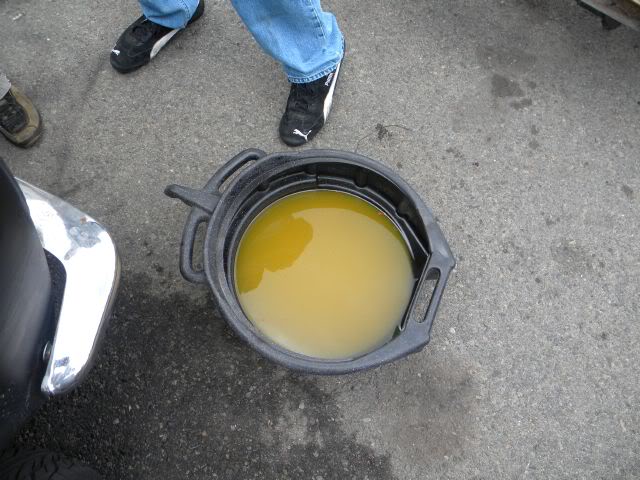 Greg and I leave the shop around noon, me pulling the 411 and him driving the 510. Definitely turned a few heads in traffic, with a Frontier towing a 411, followed by a 510! 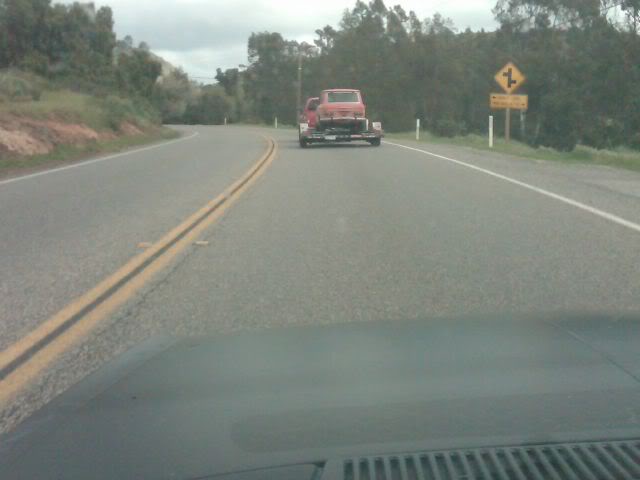 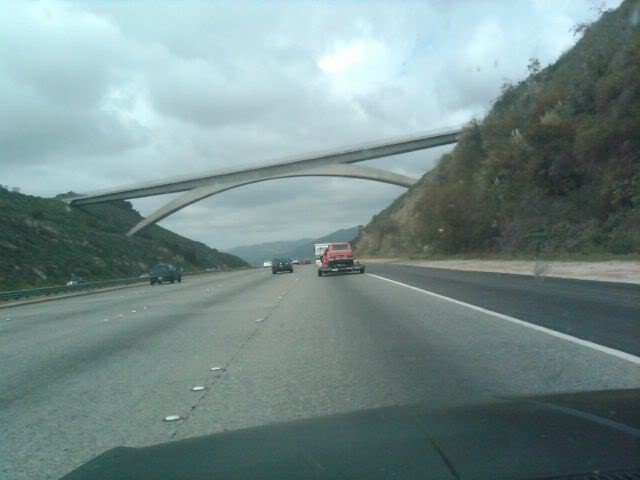 A couple of hours into the trip, I lose sight of him in my mirror. Hoping it was just heavy traffic, I call him. The battery had boiled over from the alternator overcharging, killing the ignition, so he was on the side of the interstate. I swing back a couple exits to get to him. Just luckily, we had thought to bring an extra battery. Her ignition switch was useless at this point, but a screwdriver across the starter posts and we’re back on the road. Just as a side note…it is completely unnerving to be working on your car on the side of the interstate with cars zipping past you at 80+ mph.

The fact that the car wouldn’t go much over 60 mph turned a six hour trip into over eight hours. The darkness fell upon us 2.5 hours outside of Phoenix… You never think about how stressful it is to drive an unfamiliar 43-year old car with no headlights, no seatbelts, and no gauges in pitch darkness. Greg finally relented, and we had no choice but to leave the Dime behind. We parked her at a gas station under a bright light, locked the doors, and prayed no one would try and steal her. We rolled into our driveway just after 11 PM, exhausted and glad to be home.